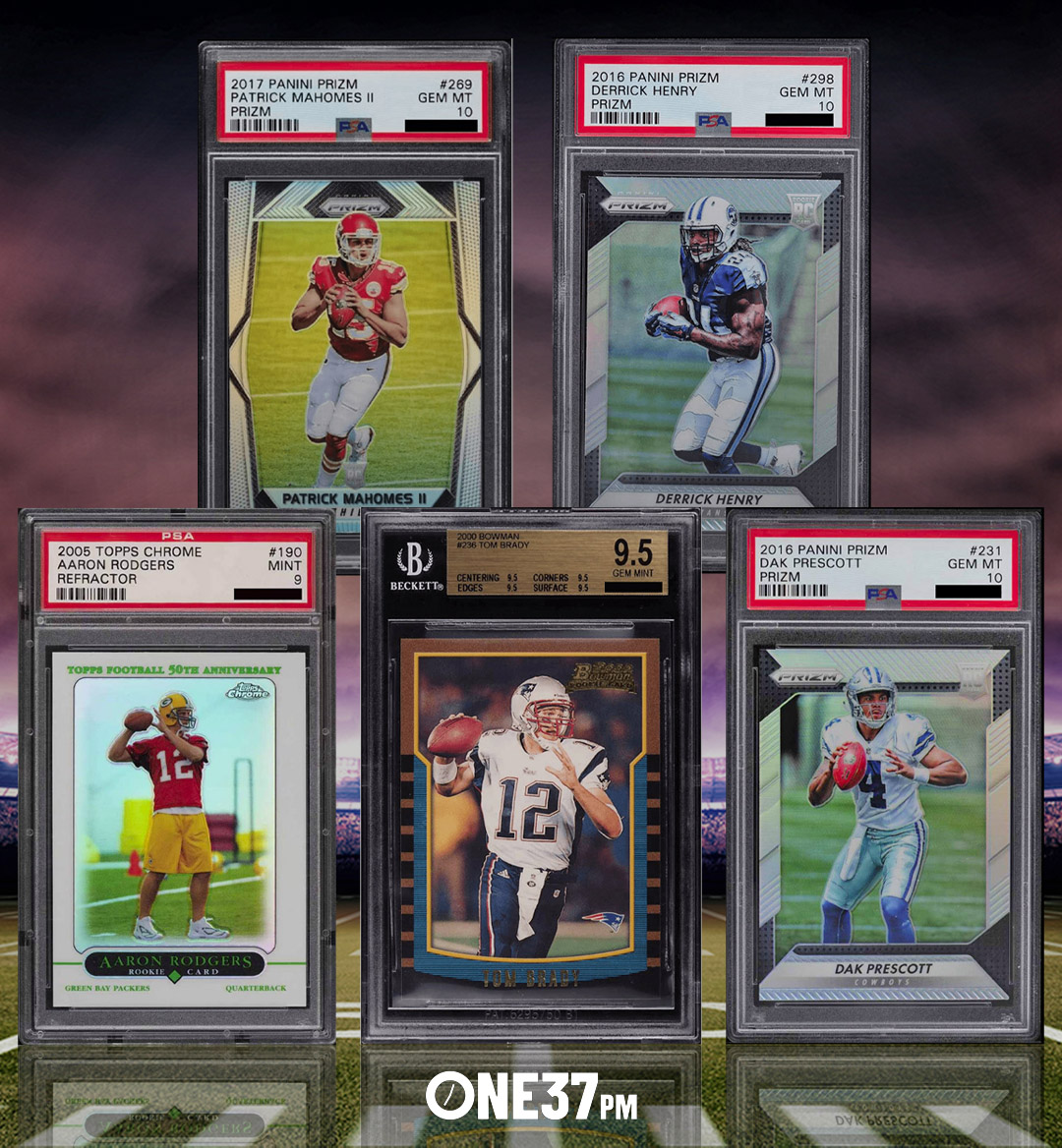 The NFL playoffs are finally here and it’s time to look at the top 10 football cards to watch heading into the post-season.

This year’s post-season offers up a lot of opportunity for quarterbacks both young and old. Joe Burrow makes his first playoff appearance. Mac Jones gets a shot at becoming the first rookie quarterback ever to win a Super Bowl. Tom Brady is seeking his 8th Super Bowl Victory, likely MVP Aaron Rodgers looks to win his second Super Bowl and Matthew Stafford could finally win his first playoff game. 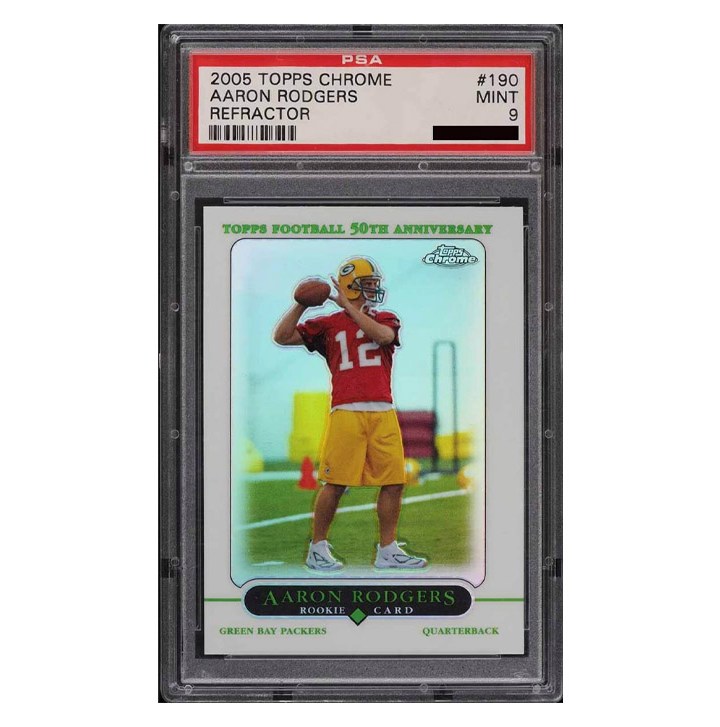 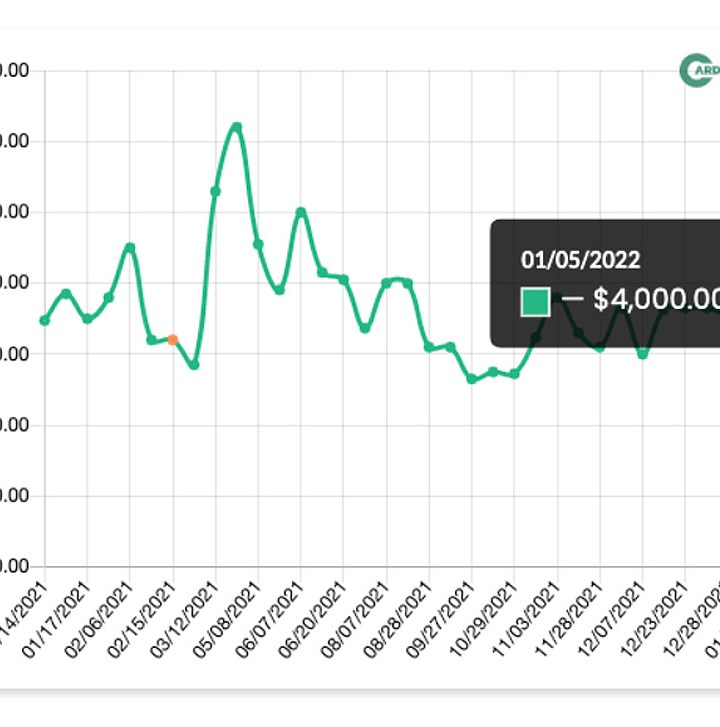 This is the top card to watch as we approach the NFL playoffs because Rodgers has the chance both to win another Super Bowl and add a fourth MVP award to his resume.

Will a Super Bowl run push this card price back to its peak? Time will tell. 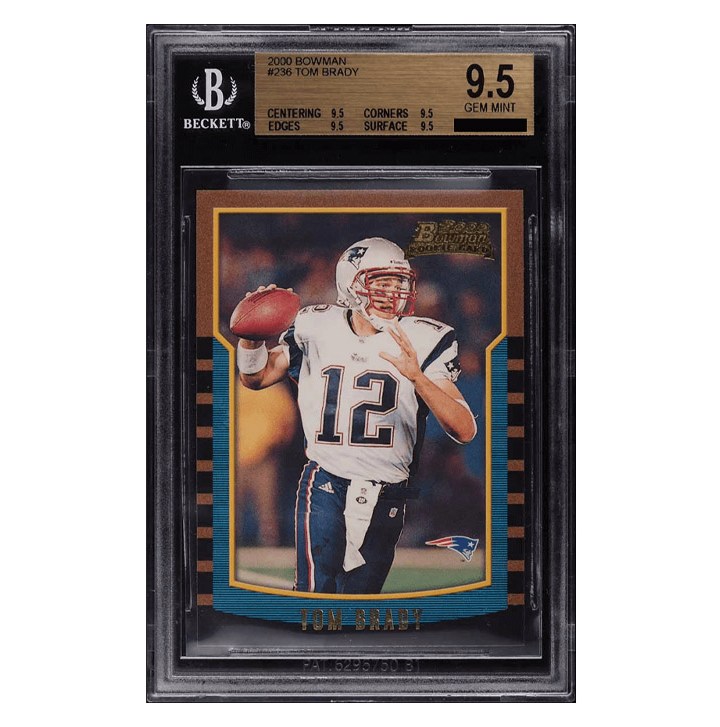 The Buccaneers have now fallen to the fourth-best odds to win the Super Bowl, but Tom Brady has seven Super Bowl rings to prove that you shouldn’t count them out. Brady is also in the running for the MVP award and many think it should be him over Aaron Rodgers. 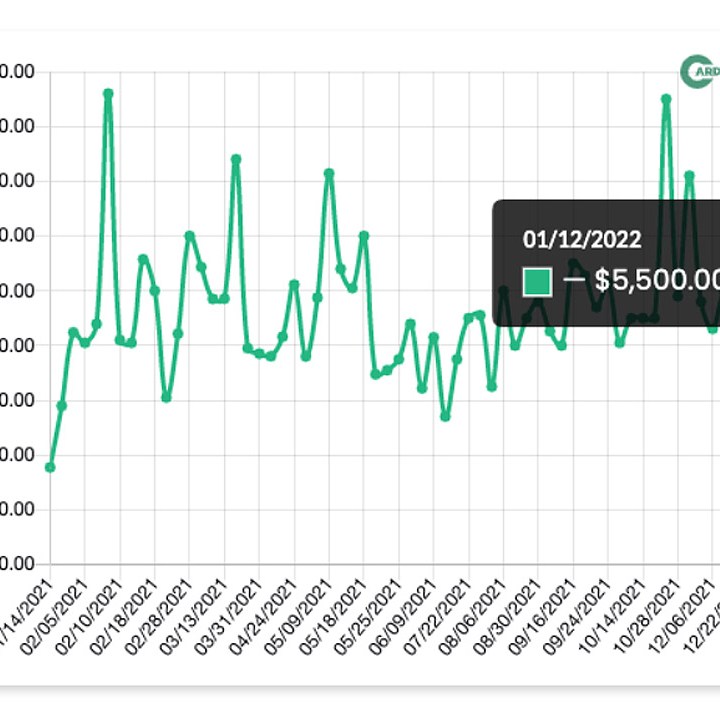 This is one of the most interesting cards on this list. It’s an affordable, high-grade rookie with a relatively low pop. Brady is a 7-time Super Bowl champion and could become the oldest MVP in NFL history (again).

On February 9th, just two days after the Buccaneers won the Super Bowl, a copy of this card sold for $8,600 before dropping to $2,705 in June.

The card hit a second high price of $8,500 in October before settling at $5,500. If Brady and the Buccaneers make a legitimate Super Bowl run, it will be fun to see if this card reaches the same heights it did during last year’s Super Bowl. 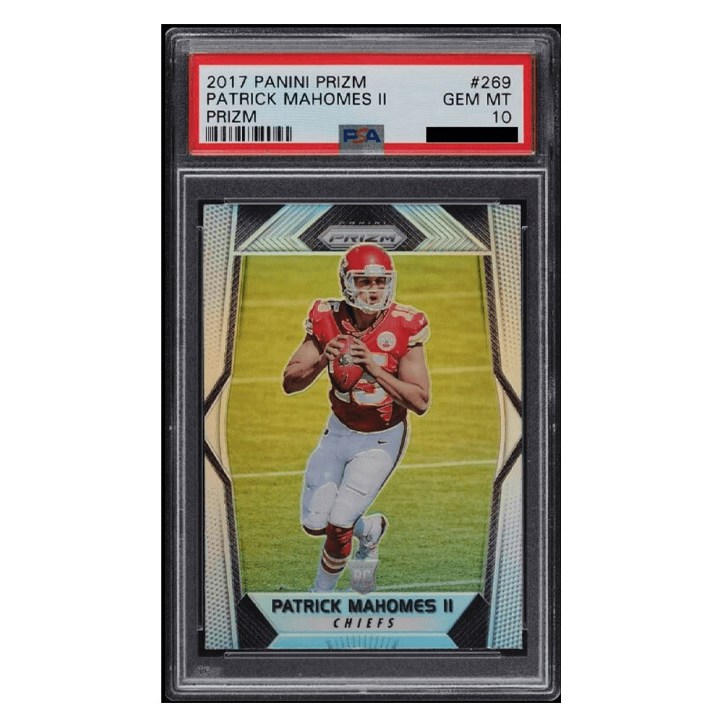 Patrick Mahomes already has a Super Bowl Championship, NFL MVP under his belt, and is 6–2 in the postseason. He’s played in 2 Super Bowls and nearly made it to a 3rd. Yet, some may be counting Mahomes out due to his struggles this season. 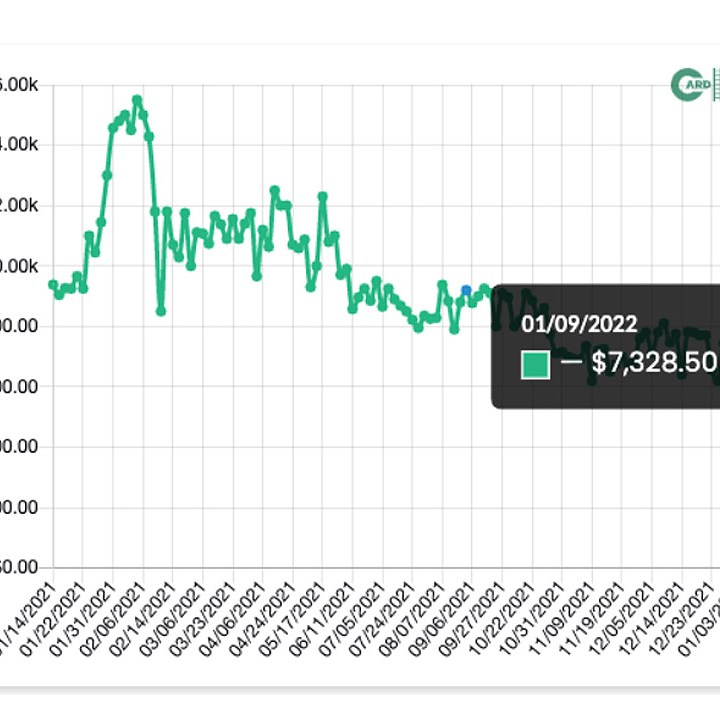 The card peaked at $15,500 right before last year’s Super Bowl and has since lost 52% of its value. It’s worth noting that in 2017, there were no Prizm base cards, which is why the population of this 2017 “silver” is higher than other players on this list.

The supply hasn’t increased much since April, with only 22 new PSA 10 copies being graded.

If Mahomes and crew can make a run this year, keep eye on this card. 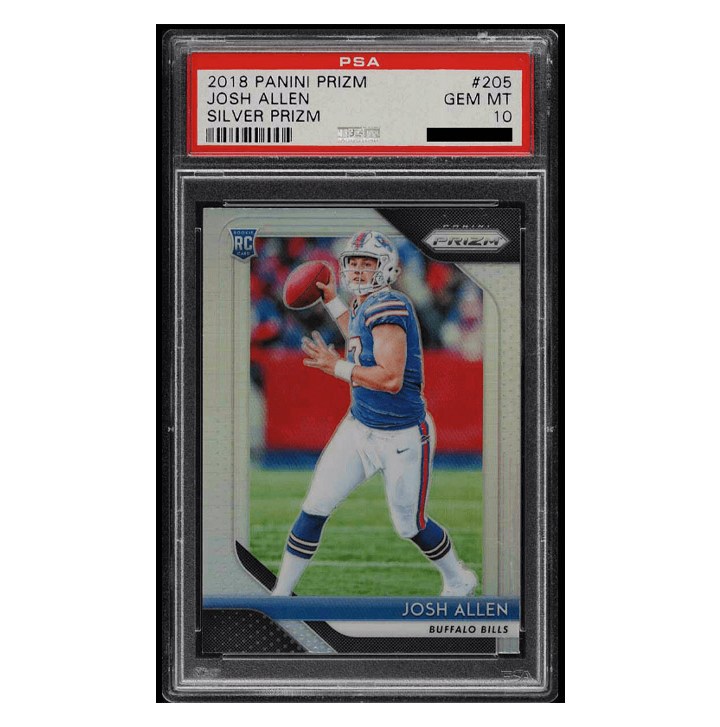 The Buffalo Bills have the fifth-best odds to win the Super Bowl and start their championship run against the New England Patriots this Saturday. The Bills lost their first regular-season match-up to the Patriots 14–10 but won the second match-up 33–21. 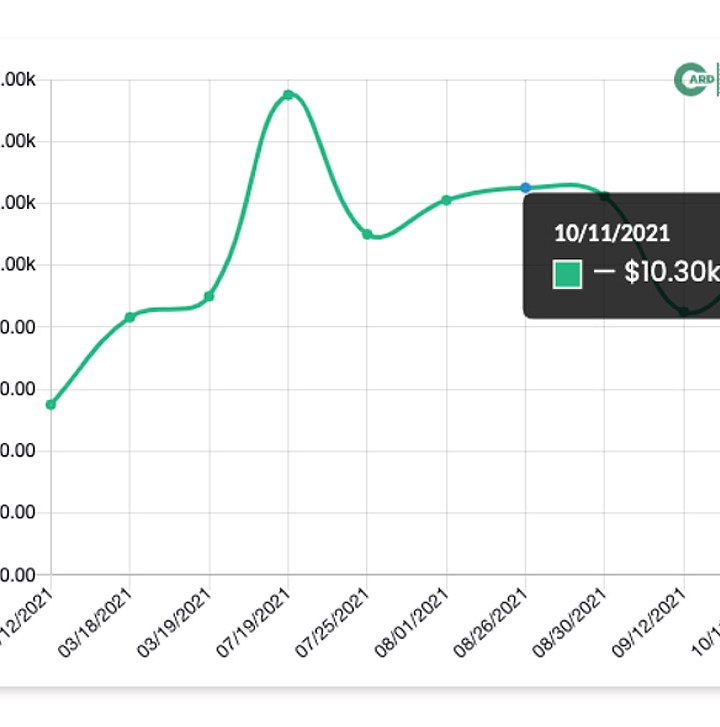 The card hit an all-time high price of $15,500 in July, perhaps because Allen finished 2nd in MVP voting for the 2020 season after leading the Bills to the AFC championship.

Buffalo is currently a 4-point favorite over the Patriots. 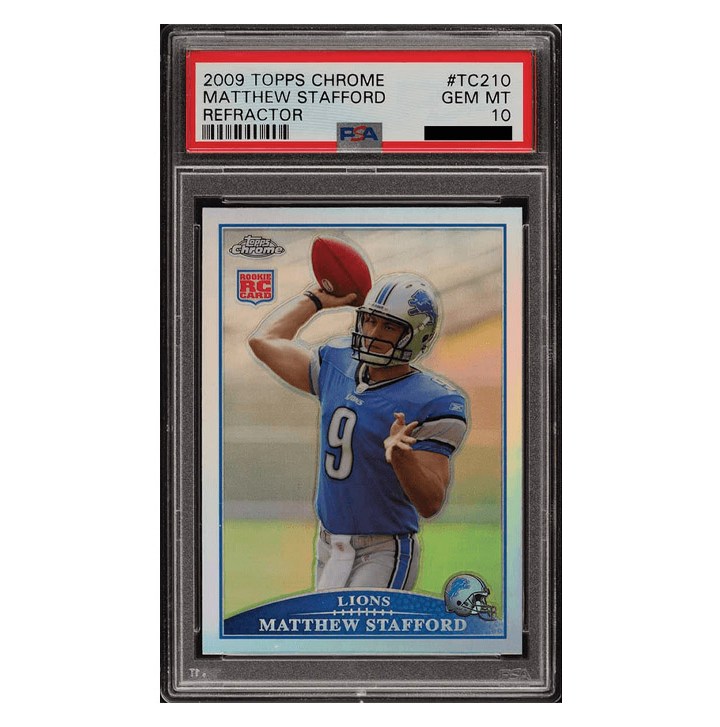 Matt Stafford has never won a playoff game in his 12-year career and hopes to change that this year. The Rams have the sixth-best odds to win the Super Bowl and open up the playoffs at home against the Cardinals. Although the Rams lost to the Cardinals earlier in the season, they beat them 30–23 in mid-December. 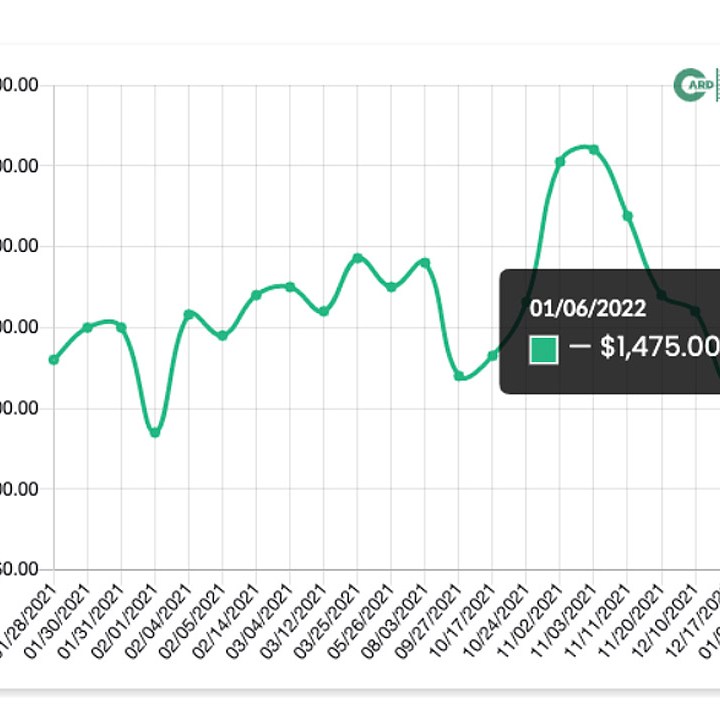 The card hit an all-time high price of $2,600 in November but has since come down in value, likely due to the Ram’s (and Stafford’s) inconsistent play. The Rams have one of the most star-studded rosters on paper, but can’t seem to pull it together against good teams. 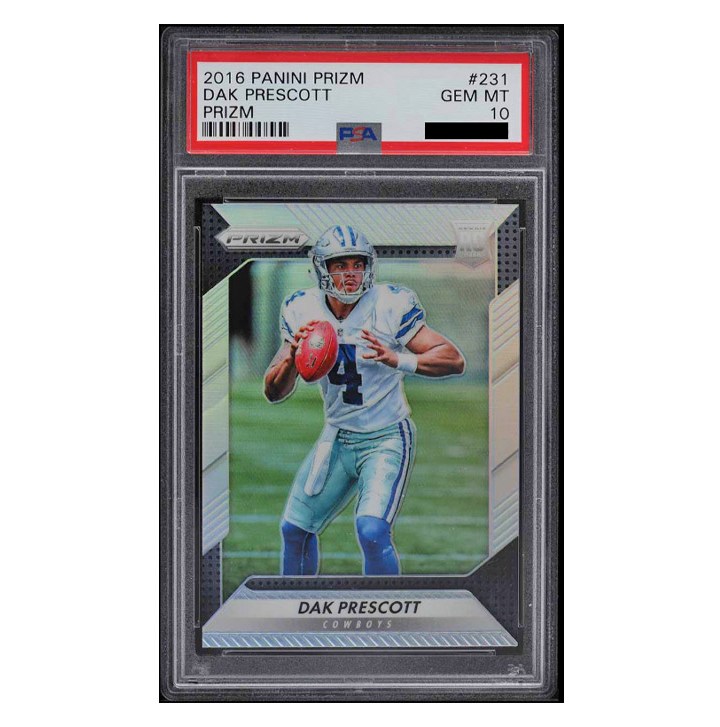 The Dallas Cowboys have the seventh-best odds to win the Super Bowl and open their playoff run against the San Francisco 49ers at home. The last time the Cowboys faced the 49ers is the last time they were in the NFC Championship: 25 years ago.

Prescott has played well this year after coming off of a season-ending injury but has a lot of pressure to lead his team in the post-season since Dallas has won just 3 playoff games since 2000. 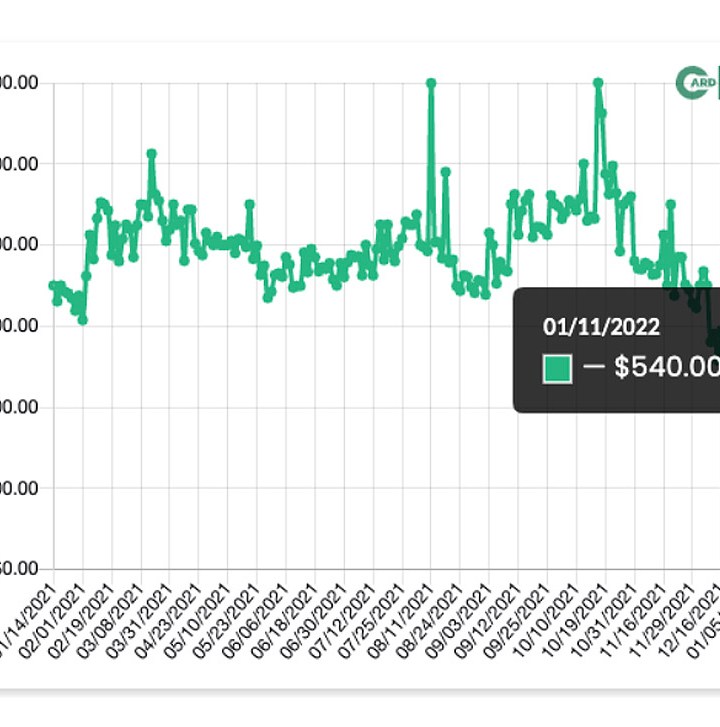 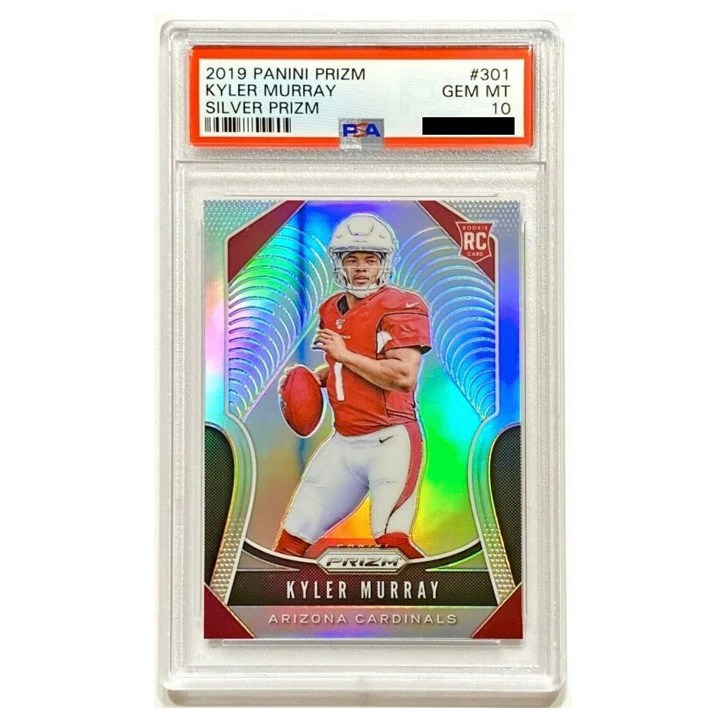 The Arizona Cardinals started off the season white-hot, going 7–0, but lost 4 out of their 5 regular-season games. The Cardinals have the eighth-best odds to win the Super Bowl but will be missing DeAndre Hopkins and possibly JJ Watt against the Rams, which are two big blows.

Murray was playing well to start the season, but since returning from injury, he’s struggled. 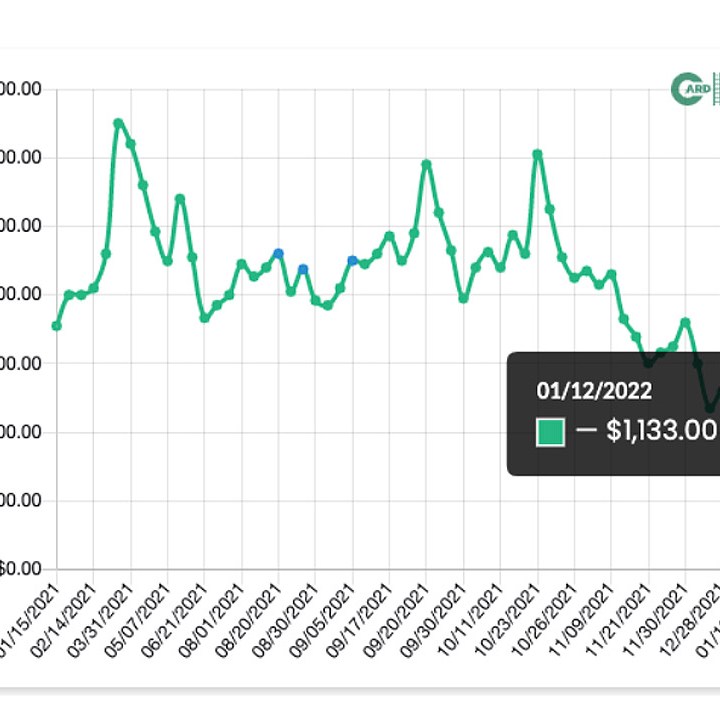 The card hit a 2021 high price of $3,250 (lower than the all-time high of $4,950 in March 2020) but has been dropping since October. If Murray and the Cardinals look like they did the first half of this season in the playoffs, perhaps the trend will reverse. 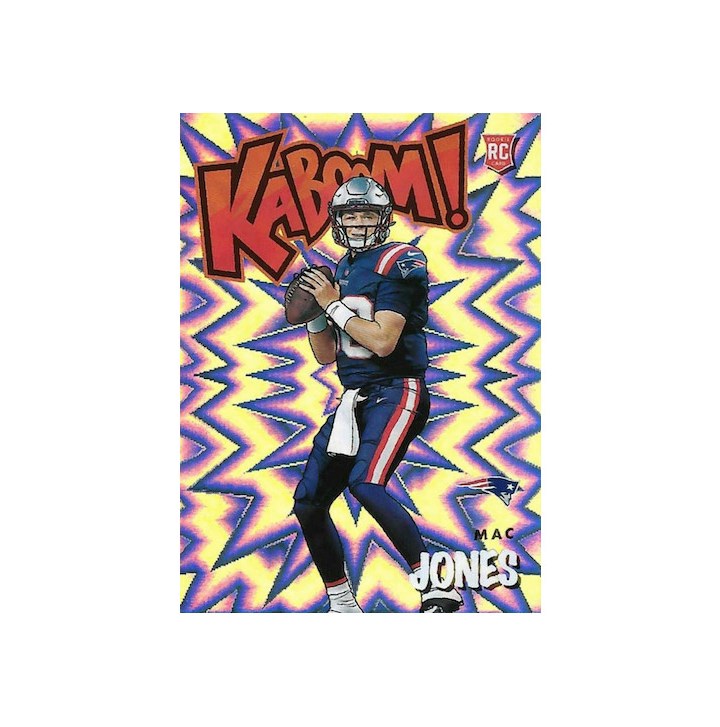 Because Jones is a rookie, his Prizm cards won’t be released until March 2022, so we’re going with his Kaboom! rookie.

Kaboom! rookie cards have been popular and growing in value, and Jones’ latest sale on eBay was $1,325. For comparison, Josh Allen’s Kaboom! Rookie BGS 9.5 last sold for $5,820.

Jones could win offensive rookie of the year and frigid temps for their Wild Card game against the Bills could create some opportunity for an upset. 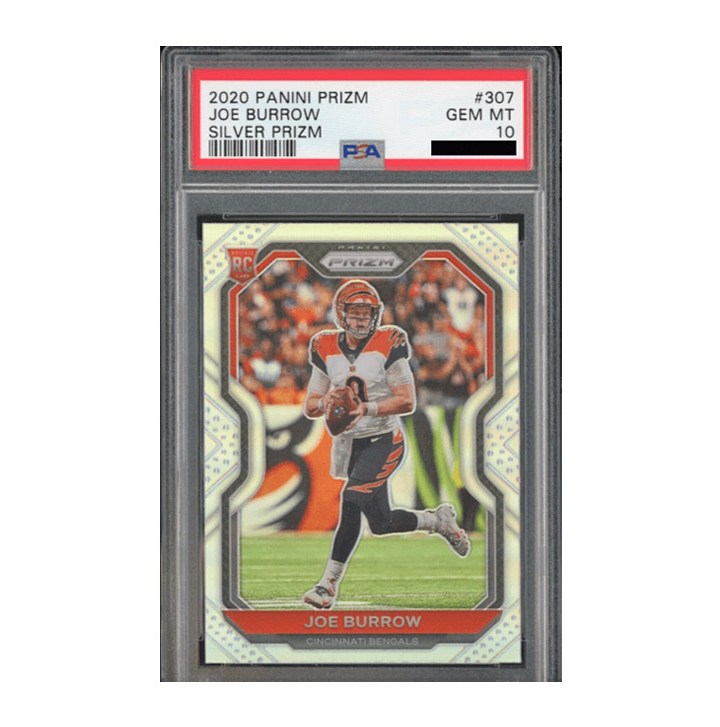 The Cincinnati Bengals have the ninth-best odds to win the Super Bowl, which is impressive considering that the Bengals went 4–11–1 the previous season and Joe Burrow is coming off of an ACL tear. 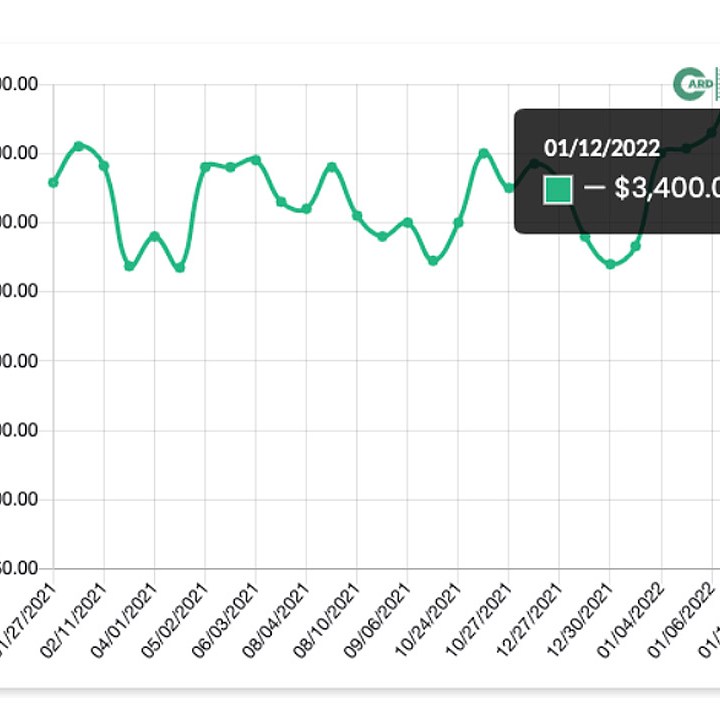 It also doesn’t hurt that Burrow is paired up with a rookie receiver who looks to be on an elite career path. The Bengals open up their playoff run at home against the Raiders. 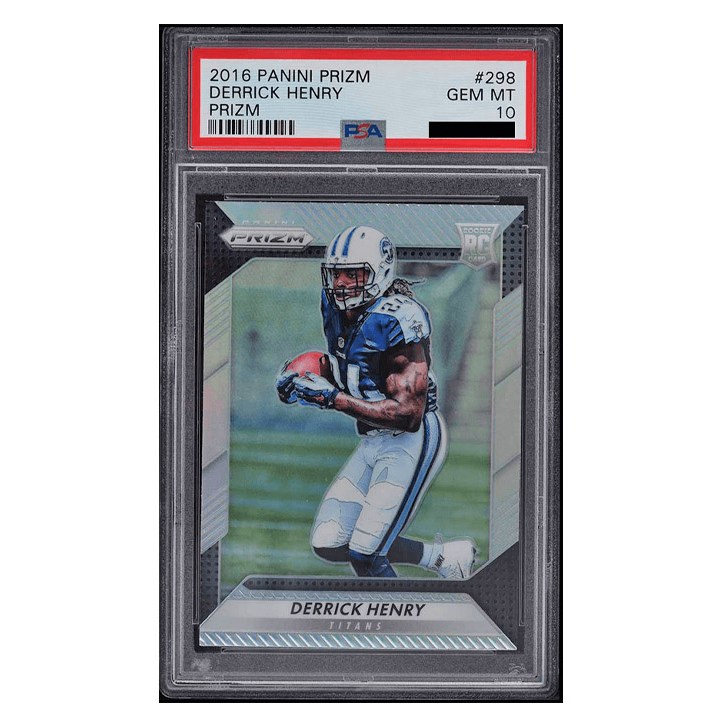 Derrick Henry is the only non-QB on this list and for good reason: he was largely responsible for leading the Tennesee Titans to the AFC Championship in the 2019 season.

In 2020, the Titans were knocked out of the Wild Card by the Baltimore Ravens when Henry rushed for just 40 yards on 18 carries, but they are the AFC’s 1-seed and have the third-best odds to win the Super Bowl.

Henry was having a dominant 2021 season, rushing for 937 yards in eight games before he was sidelined with an injury. This is a risky bet because it’s still unclear if he will return for the divisional playoff round. 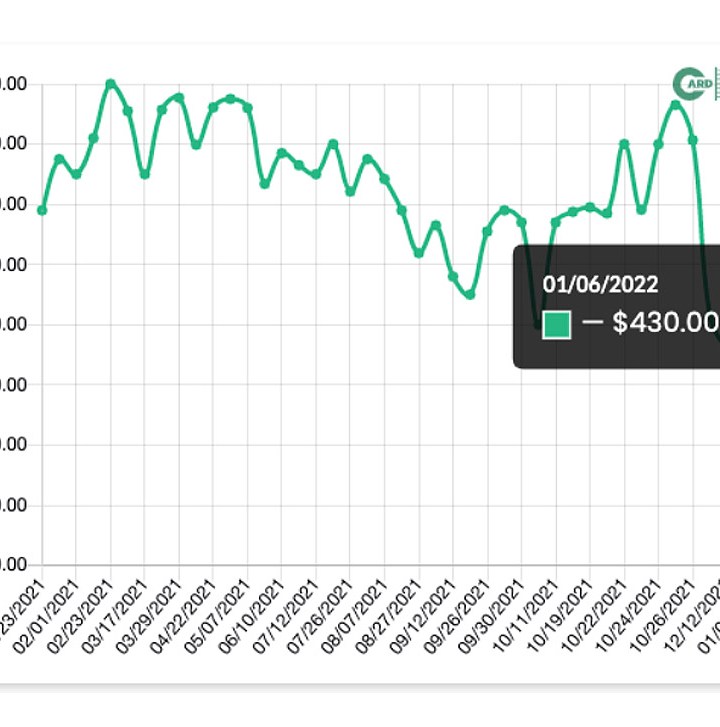 The card hit a high price of $800 in February and rebounded again in October. Henry’s injury is a massive risk to his card prices but there’s a lot of upside if he can come back and play like his old self in the divisional round.