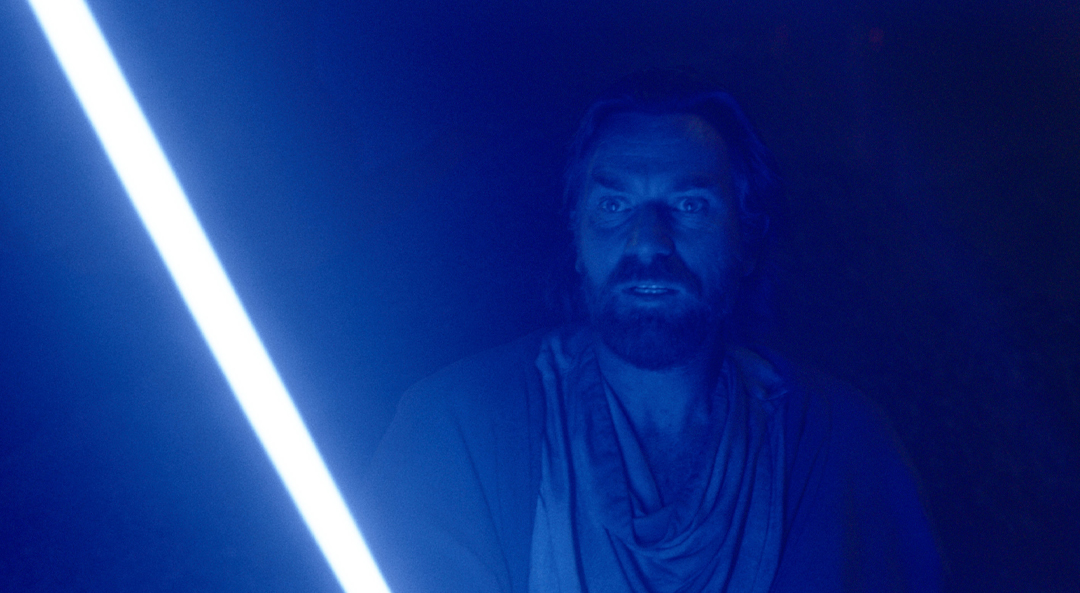 After last week's thrilling episode that featured the terrifying return of Darth Vader, Obi-Wan Kenobi's "Part 4" finds Obi-Wan on the run once again, fleeing from his encounter with his former friend.

The shortest episode so far, which, after accounting for the intro and credits, clocked in at just around a half hour, sees Obi-Wan recovering from his injuries on Mapuzo.

Another Week, Another Bacta Tank

This week's episode opens with Obi-Wan floating in and out of consciousness as Tala tends to him. They're onboard her ship heading to Jabiim; the planet alluded to last week that serves as a haven for their resistance network.

We see the full scope of his injuries, severe burns up and down his arm and shoulders; a trip through a burning pit tends to do that to folks. They make it to Jabiim, where, as is tradition, he's placed into a Bacta tank to heal from his injuries.

The shots of Obi-Wan in the tank are spliced in with images of Vader doing the same thing, both trying to heal their physical and emotional scars. Vader's quotes from last week, "the years have made you weak," "You should have killed me when you had the chance," and "I am what you made me," are heard as well. Obi-Wan continues to struggle with the knowledge that not only is this Anakin, but this is what he is capable of.

Obi-Wan climbs his way out of the Bacta tank as Tala protests, insisting he needs more time to heal. She lets him know that they're safe on Jabiim, but he needs to know where Leia is. Unfortunately, she is not with them, and it's revealed that she was captured by Reva and is being held at the Fortress Inquisitorius.

Leia is interrogated by Reva, who demands to know where Obi-Wan and the resistance cell are hiding. She tells Leia that Obi-Wan was killed on Mapuzo and burned to death during the escape.

Obi-Wan and Tala connect with another member of the resistance cell, Roken (O'Shea Jackson Jr.), who stresses that Obi-Wan needs to get off the planet now. With so much attention being placed on finding him, Obi-Wan's presence on the planet puts everyone, especially those who are Force sensitive, in danger.

Roken tells Obi-Wan and Tala that his wife was Force Sensitive and that she was hunted down by the Inquisitors and killed. He helps Obi-Wan and Tala by showing them scans of the facility, and they begin the journey to the fortress. On the way, Obi-Wan tries to reconnect with the Force, but it's still a struggle for him.

Let's Take a Trip to the Fortress Inquisitorius

While Reva continues her interrogation of Leia, Tala lands at the Fortress and makes her way through security. Meanwhile, Obi-Wan (using the old familiar breathing tool from The Phantom Menace) sneaks onto the fortress.

Reva attempts to pull the information from Leia, taking her droid Lola from her. Obi-Wan sneaks through the facility, hiding from some patrolling stormtroopers. He uses the Force to distract the two of them and they head in a different direction.

Leia nearly tells Reva where they are but she refuses. As Leia is placed into a torture rack, Obi-Wan senses something is amiss and he discovers that the area he is in is a tomb of sorts, featuring the bodies of not just Jedi but civilians as well.

Tala distracts Reva by lying to her and saying that the Jedi and rebels are hiding in Florum. The room where Leia is being held is pitch black when suddenly the light from Obi-Wan's saber ignites and he kills the stormtroopers that were guarding her.

Obi-Wan and Leia are discovered by a sentry droid and attacked by a group of stormtroopers. Protecting her from them, Obi-Wan blocks their shots as Reva gives chase. A stray blaster shot makes a crack in the window of the fortress with Obi-Wan attempting to hold the water back. The stormtroopers try to get through the door but he manages to escape before they do.

Obi-Wan, Tala, and Leia continue their escape in disguise (with Leia even hiding underneath a trenchcoat for good measure.) The stormtroopers surround them, but just as they are about to open fire, they are saved by a group of Rebel T-47s.

One of the fighters is taken down by Reva, who manages to destroy one with an explosive device. We cut to Darth Vader marching down a hallway (clearly not pleased with the fact Reva got away.)

He Force chokes her and threatens her by saying, "I will tolerate your weakness no longer." She tells him that she placed a tracker on their ship, with their location being revealed to them soon.

She placed the tracker on Leia's droid companion Lola, and the episode ends with Lola's light firing up, indicating the tracker is now active.

While certainly a step back from the third episode of the show, Obi-Wan Kenobi's fourth episode provided plenty of thrills to keep the action going. Obi-Wan's infiltration and battles with the stormtroopers were a highlight, showing that, even after all these years, he can still fight when given a chance.

Vivien Lyra Blair continues to be a stand-out as young Leia, portraying the snarkiness of the Princess that we all loved in the original trilogy. While Ewan McGregor remains the highlight, the rest of the cast surrounding him does help elevate the show as well.

It's unfortunate that after last week's showcase of Darth Vader's pure villainy, he had been relegated to a background character in this episode. There are two episodes remaining of Obi-Wan Kenobi, and time is running out as far as their eventual showdown is concerned.