Once You've Finished the New Season, Here Are 20 Shows Like 'The Boys' You Need to Watch 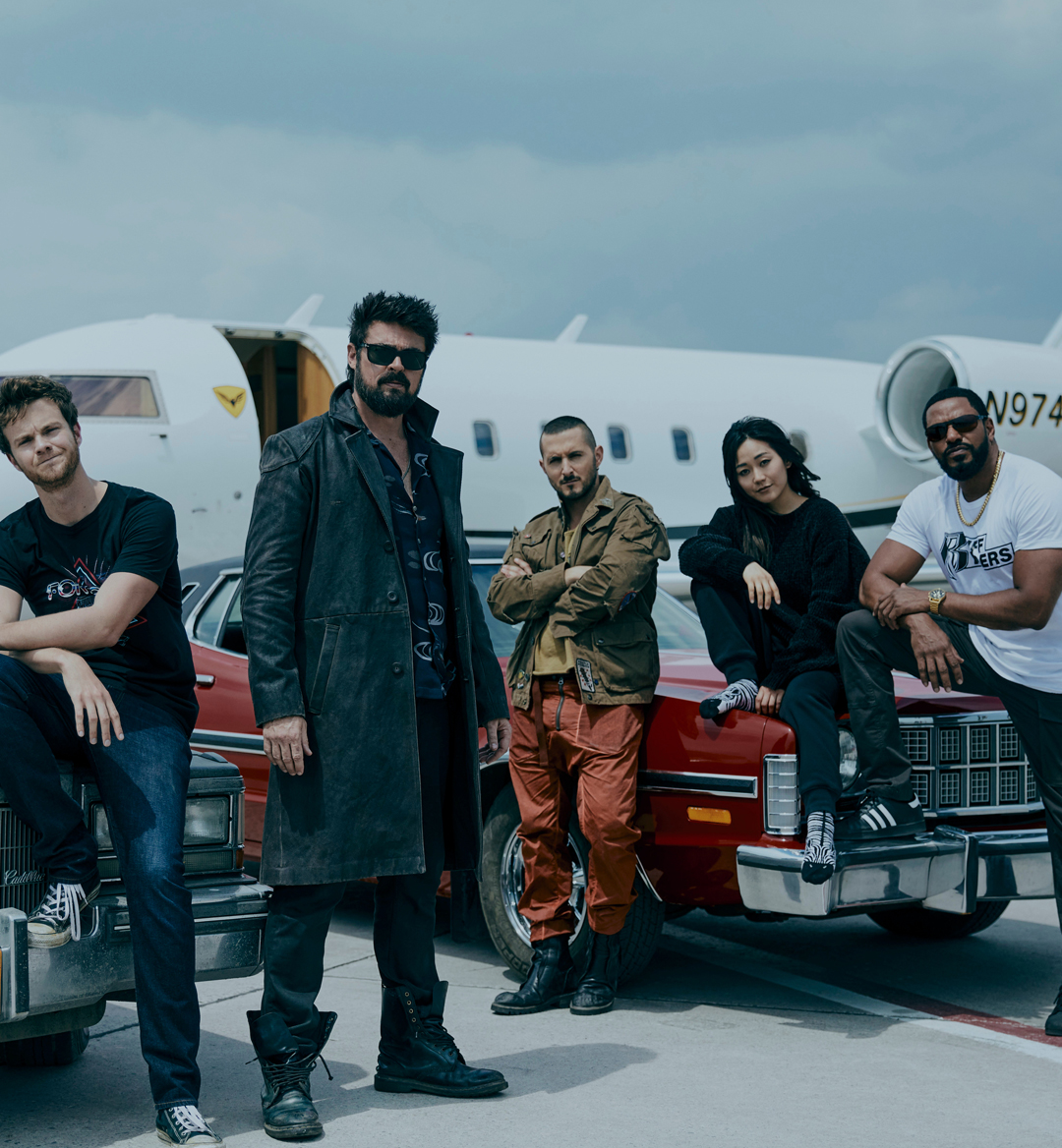 Since its debut in 2019, The Boys has won over a cult-like following that is in agreement with it being the best and craziest show out. On the 3rd of June, three episodes from the new season premiered and since then, episodes have been coming out weekly.

The Boys is outrageous, pushes the boundaries with every episode, and with its gore and wackiness, doesn’t take itself too seriously at all. With these criteria, it’s tough to find shows that give you the same feeling, but that doesn’t mean we haven’t tried.

Below is a list of twenty shows like The Boys, whether that be because of the cast, the superhero element, or the idea of good vs. bad within specific characters. Check it out below in alphabetical order.

On The Boys, Homelander is played by Antony Starr and is easily one of the most captivating characters in the entire show. If you’re interested in where you can find more of his work, look no further than Banshee. In this show, he plays Lucas Hood, an ex-con who assumes the role of the recently deceased sheriff. As a result, identity is a big theme and despite being a show you might not have ever heard of before, this can keep your attention quite easily.

This is an incredibly popular show and fans of it swear it’s the best of all time, so perhaps you’re wondering how Breaking Bad is anything like The Boys. The answer lies in both shows’ anti-heroes. Here, Walter White starts off as an unassuming family man but by the end, is a psychopath hellbent on doing whatever he needs to for him to come out on top. Characters are used as pawns and have ulterior motives just like they do in The Boys.

This show follows the Doom Patrol, a group of superheroes who got their powers through terrible circumstances like being exposed to toxic gas, being forced to be a part of cruel experiments, or suffering in car crashes. They must carry this emotional baggage on their shoulders along with the weight of having to save everyone, all while the public shuns them for their origins. All of the heroes here are from DC comics too.

As wacky as The Boys can get, it feels like a purpose-driven show that has some crazy elements in it. Happy! is a show that feels like it’s insane for the sake of being insane. If some of those moments from The Boys are your favorite, then this show is a must-watch. The show features imaginary friends, sex cults, aliens, alcoholism, and a hell of a lot more that makes it a very entertaining watch. Also like The Boys, this is an adaptation of a comic.

Heroes is one of the older shows on this list. It aired on NBC in the mid-2000s and in many ways, it laid a foundation for shows that came after it. The show is about seemingly regular people with extraordinary abilities. Uniquely, the aesthetic of the show is American-style comic books, using multi-episode story arcs to build the larger narrative. The show ran for four seasons before ending in 2010 but if you love it and want a little more of a dose, check out Heroes Reborn which aired in 2015.

Omni-Man (voiced by J.K. Simmons) is the most powerful superhero on the planet and his son Mark Grayson (voiced by Steven Yeun) has inherited his powers, but is just seventeen and struggles to use them. Without spoiling anything, Omni-Man might make you think of a certain supe from The Boys too. This animated series is a great insight into coming of age as a superhero which is an idea explored in The Boys. This show was developed by Simon Racioppa, who created The Boys: Diabolical, which we’ll get more into later on in this list.

Jessica Jones was a great Marvel series that had fans very disappointed when it was canceled in 2019. The title character was a superhero once and suffers PTSD from that time period, a mature topic that Marvel has also explored with Tony Stark. Jones now runs her own detective agency and the show is about the events that unfold. If you’re a fan of this one, Jessica Jones also appears in The Defenders which pops up later on in this list.

Legion is a Marvel show that follows the timeline of the X-Men films. David Haller is Professor X’s son who is diagnosed with schizophrenia and put into a mental institution. There though, he has a suspicion that he might just have superpowers. The show tackles mental health issues and other real-world issues as well as the generic tropes of your average superhero show. It marches to the beat of its own drum, which is in essence all you want if you’re a fan of The Boys.

When a group of people sentenced to community service is hit by lightning, the results are incredibly strange. They all have superpowers, but so does the villain who they must kill before he attempts to do the same to them. The show is about how events unfold from here, hiding their crime and trying to make out that their victim is still alive by using his credit card. If superheroes with a twist are your thing, Misfits was early on that wave.

On paper, One-Punch Man might not seem much like The Boys outside of its superhero concept. However, the anime can be strikingly similar in some of its themes. Due to the fact that he is a c-class superhero, people look down on him despite his devastating power. If buildings are destroyed while he saves someone’s life, that’s what he gets criticized for. The show is about his journey which is enthralling and if you’re not into anime but like The Boys, this is a great crossover.

Peacemaker is arguably the show on this list that is most like The Boys in the most ways. In fact, the former was almost certainly influenced by the latter. Peacemaker sees John Cena as the protagonist and it’s set after the events of the Suicide Squad film. The show is goofy at times and doesn’t take itself too seriously, but those moments are offset by the more serious, gory ones that will definitely give you The Boys flashbacks.

Yet another show that looks at superheroes from a more realistic and cynical point of view, Powers is a show that flew under the radar for most due to it being a PlayStation exclusive. The main character is Christian Walker, who is a former superhero and uses his experience to help the division of police that helps with superhero crime. There are a pair of seasons to this show and despite the strange platform they were made for, it’s a show that has a negative look on superheroes just like The Boys.

Preacher is a must-watch if you’re a fan of The Boys because they have a shared beginning. Garth Ennis wrote the comic books that both shows are based on. In the same way that The Boys takes a sideways look at superheroes, Preacher has a unique approach to religion and all of its hypocrisies and conspiracies. Supernatural abilities do come into play, but it’s not the focus here. Executive producers Seth Rogen and Evan Goldberg also executive produce this show, so checking it out is a no-brainer.

Even if you’re a big fan of The Boys, you might not know about Diabolical. It’s an Amazon show which is set in the same universe as The Boys and uses a different animation style in every episode. Some characters like The Deep and Homelander even appear here and Compound V makes an appearance so that The Boys-shaped hole in your heart in between weekly episode drops won’t be filled better than it will with Diabolical.

The Defenders is a show set after the first two seasons of Daredevil and shortly after the first Iron Fist season. In it are Jessica Jones, Daredevil, Luke Cage, and Iron Fist who all come together to fight against The Hand and defend New York City. It’s worth watching the shows that come before this one before you check this out, but the way everyone bands together here feels most like The Boys.

16. 'The Falcon and The Winter Soldier'

Being a fan of The Boys doesn’t necessarily mean you might like all of the films and shows that are part of the Marvel Cinematic Universe, but The Falcon and The Winter Soldier might still appeal to you. It’s set after the events of Avengers: Endgame where (spoiler alert) Captain America hands Sam Wilson his shield. The show tackles Sam struggling with representing a country that doesn’t represent him and feels a little more mature than a lot of the MCU is.

The Umbrella Academy is another show that looks at superheroes through a darker lens and is adapted from a comic book. The over-the-top violence from The Boys makes an appearance here, as does the complicated relationship between the superheroes. The concept is that a bunch of women around the world who were not pregnant give birth at the same time to these heroes and who are then adopted by an eccentric billionaire.

A group of villains is trying to go back in time and rewrite history and a group consisting of a professor, an engineer and a soldier must stop them. This show was co-created by Eric Kripke, who is The Boys’ showrunner. It also features a bunch of actors who you’ll recognize from The Boys, including but not limited to Malcolm Barrett and Goran Visnjic.

Titans will scratch the same itch as The Boys for many, but it also feels like its own show, which is important. The similarities lie in a group of heroes who would much rather do things on their own than together. The show will snap body parts and make you squirm in the same way that The Boys does. The show is set in the DC Universe with references here and there.

In a world where superheroes are treated as criminals, Angela Abar must be careful at night when she roams the streets as Sister Night. She’s a police officer during the day, which makes for a unique problem. The show is yet another behind-the-scenes look at being a superhero and how something like Marvel or DC would actually apply to the real world. While this show is based on a series of comic books, it’s set three decades after the events of the comics.

Watch now on HBO Max
Slide 1 of 3
Did you like this article?