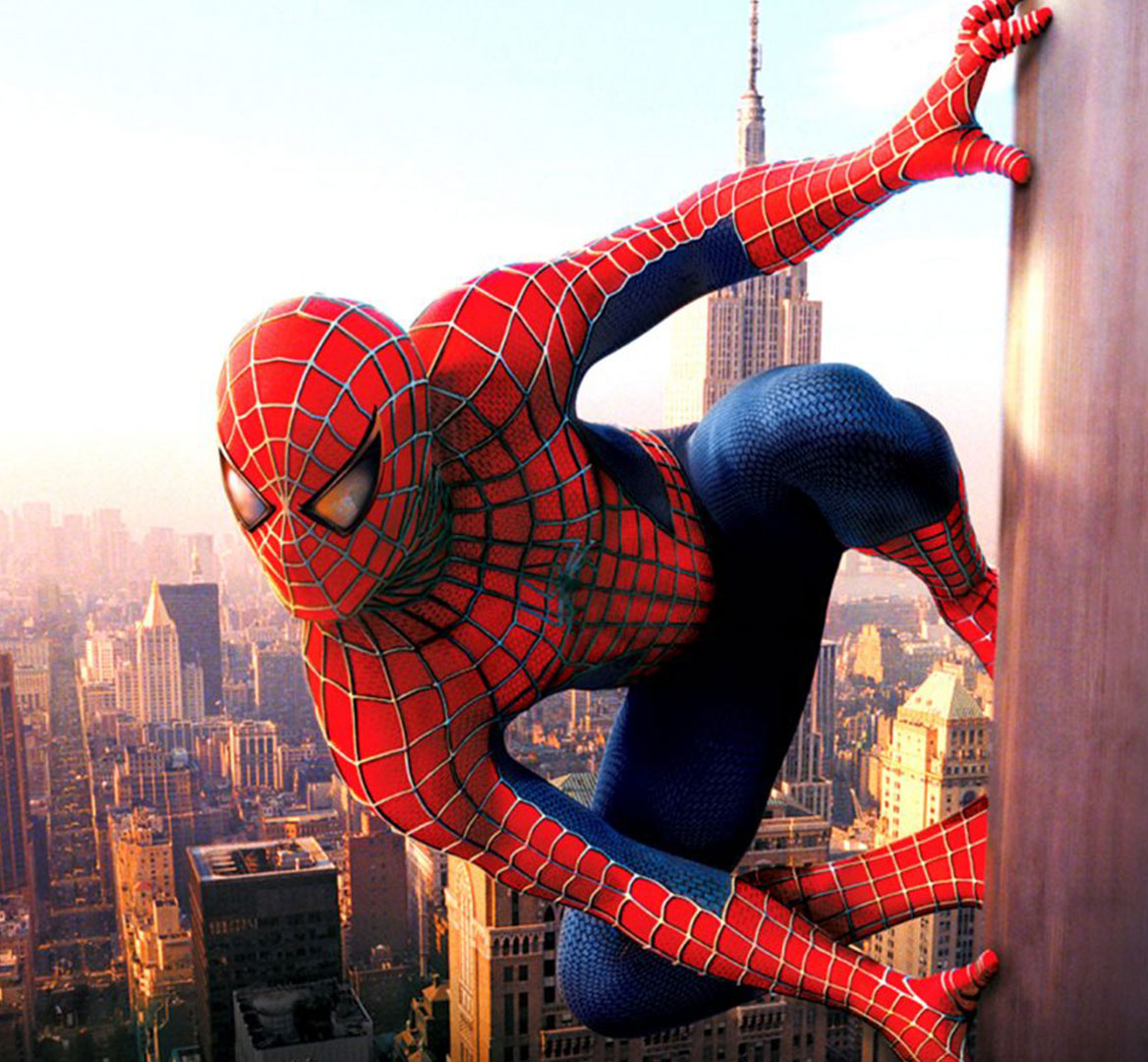 After being stuck inside for what feels like forever, swinging around New York City like Spider-Man sounds pretty amazing right about now. Whether he’s fighting villains or helping his Aunt May put groceries away, Spider-Man, AKA Peter Parker, embodies some of the best traits a human being can have.

He’s loving, loyal, and willing to do anything he can to help others. Some people are lucky enough to own a PS4 and embody the wall-crawler in the console-exclusive video game, but fortunately, the rest of us can enjoy a number of Spider-Man movies whenever we want to spend some quality time with our favorite webhead.

Long before everyone’s favorite superhero had its own feature film, director, Sam Raimi, helped pave the path for the entire genre’s success with the first Spider-Man film.

With Tobey Maguire in the titular role, Spider-Man displays a nice balance between high school drama and stressful superhero situations that strike right into the character’s core. Nerd Peter Parker just wants to hang out with his next-door neighbor, Mary Jane Watson (Kirsten Dunst), but the world of superheroes never takes a break.

Currently available on Netflix, this classic film is a must-watch for Willem Dafoe’s scene-stealing performance as Norman Osborne alone.

One of the best superhero films ever made, Spider-Man 2 is an excellent observation of the moral quandaries at the heart of the character. Fans of the character know that with great power comes great responsibility, and this film is a precise examination of the personal toll being a hero has on Peter Parker. Not only is this film currently streaming on Netflix, but it also includes some wonderful action sequences and a fantastic performance from Alfred Molina as Doctor Otto Octavius, AKA Doc Ock.

Tobey Maguire’s last film as Spider-Man has split audiences and critics ever since it came out, though there’s no denying the film has a lot of heart and—despite its flaws—deeply understands its titular hero.

An epic that sees Spider-Man stumble upon an alien entity that bonds to him before ultimately becoming the terrifying Venom with antagonist Eddie Brock (Topher Grace), this is the Sam Raimi film that puts Spider-Man through the toughest gauntlet. Streaming on Netflix, Spider-Man 3 also sees the wall-crawler outmaneuver a vengeance-seeking Harry Osborne (James Franco) and the monstrous Sandman (Thomas Haden Church).

Plans for a fourth Raimi film where John Malkovich was potentially going to play the Vulture were ultimately scrapped as Sony decided to reboot the franchise a few years later.

The first live-action Spider-Man film not directed by Sam Raimi, The Amazing Spider-Man is clearly impacted by the dark tones and “grim reality” director Christopher Nolan established in his Batman movies. With Andrew Garfield as Peter Parker, our favorite spider spends quite a bit of time moodily trying to discover more about his parents as he tries to stop the monstrous Lizard from rampaging through the city.

Instead of reexamining Peter and Mary Jane Watson’s relationship, The Amazing Spider-Man smartly cast Emma Stone as Gwen Stacy, a scientist and classmate who challenges the hero’s personal limits in different ways. Before this film, director Marc Webb was best known for 500 Days of Summer and he does a solid job at lending a similar sense of whimsical and dramatic romance throughout the film.

Some critics were harsh on the 2012 reboot, but The Amazing Spider-Man was still successful enough to warrant a sequel. Once again, Peter Parker and Gwen Stacy’s relationship make up the emotional center of the film, with one of their darkest moments being adapted in a heartbreaking sequence. However, the addition of Jamie Foxx as the villainous Electro brings fresh blood to the franchise.

Similar to Sam Raimi’s ending with the character, expanded plans for this film universe were ultimately scrapped after a poor showing at the box office as Sony began negotiating with Disney to revitalize Spider-Man all over again.

The third Captain America film may as well have been titled "Avengers 2.5" since it featured and relied on so many classic characters from the Marvel Cinematic Universe (MCU) to tell a full story. Full of intrigue and double-crossing, the film showcased some of the most popular Marvel superheroes coming to blows over the Sokovia Accords, a UN agreement that would regulate caped crusaders.

Part of what makes this film such a memorable entry in the overall Marvel Cinematic Universe is the fact that it included the first live-action interaction between Spider-Man and a member of the Avengers. Tom Holland’s live-action version of the character is the youngest and spunkiest to date as well as deeply ingratiated to Tony Stark, a noticeable distinction from previous depictions.

With Tom Holland’s Peter Parker sneaking into the Marvel Cinematic Universe with Civil War, his first solo outing was able to forego many of the story tropes both Spider-Man origin films had to include. Instead of making audiences watch Uncle Ben tragically meet his end all over again, director Jon Watts was able to quickly dive into the high school shenanigans and humor at the heart of Spider-Man: Homecoming.

A fast-paced film layered with humor and a truly menacing villain, Homecoming is a pure shot of joy that helps cement Peter Parker at the center of the MCU.

Disney may officially own Spider-Man as a character, but back when Marvel was its own entity and dealing with financial insecurity, it sold the hero’s film rights to Sony. As long as the studio releases a new Spider-Man project every five years, it is able to retain the rights even though Marvel and new parent company, Disney, are in a powerful financial position. Even though Sony struck a co-financing deal with the Big Mouse to have Spider-Man’s live-action appearances appear in Marvel’s Cinematic Universe, that didn’t mean the company would forego producing animated features with the character.

Thankfully, Spider-Man: Into the Spider-Verse is thoroughly entertaining, heartwarming, and hilarious, far from a hollow franchise for Sony to retain the Spider-Man film rights for even longer. With a stellar creative and animation team behind it, Spider-Verse, which is streaming on Netflix, is more than just one of the best superhero films ever made—it was one of the best films of 2018, period.

While Peter Parker certainly has a presence in the film, part of what makes the only Oscar-winning movie on this list so entertaining and special is its focus on Miles Morales, the ultimate Spider-Man, and its message that anyone is worthy of being a hero.

The second most recent Spider-Man film took New York’s favorite webhead on a European field trip that anyone stuck in quarantine would be envious of. Currently streaming on Prime Video, Spider-Man: Far From Home is the first film in the Marvel Cinematic Universe set after the earth-shattering Avengers: Endgame. Not only does this movie do a great job as an epilogue for Marvel’s Phase 3, but it's also an entertaining, laugh-filled showcase of what makes Spider-Man such a relatable character.

Without spoiling things, the end of this film leaves Spider-Man’s future extremely uncertain on the big screen. Now that there have been so many films focused on the teenage hero, it’s exciting to know that the next live-action outing will cover material noticeably different from anything that has come before.

Easily the most highly-anticipated Spider-Man film of all time, Spider-Man: No Way Home absolutely crushed the box office when it was first released in December of 2021, ultimately making around $1.8 billion, a monumental number.

The only thing better than one Spider-Man is three of them, and this film smacked them all together, pairing our current Spider-Man, Tom Holland, with the OG, Tobey Maguire, and the sophomore Spider-Man, Andrew Garfield. But the reunion didn't just stop there, as each Spider-Man's past villains were thrown into the present-day through a Multiverse-spell-gone-wrong situation, meaning that there was triple the conflict, as well.

Working alongside Doctor Strange, the Spider-Men have to figure out a way to send all of their villains back to their appropriate universes.