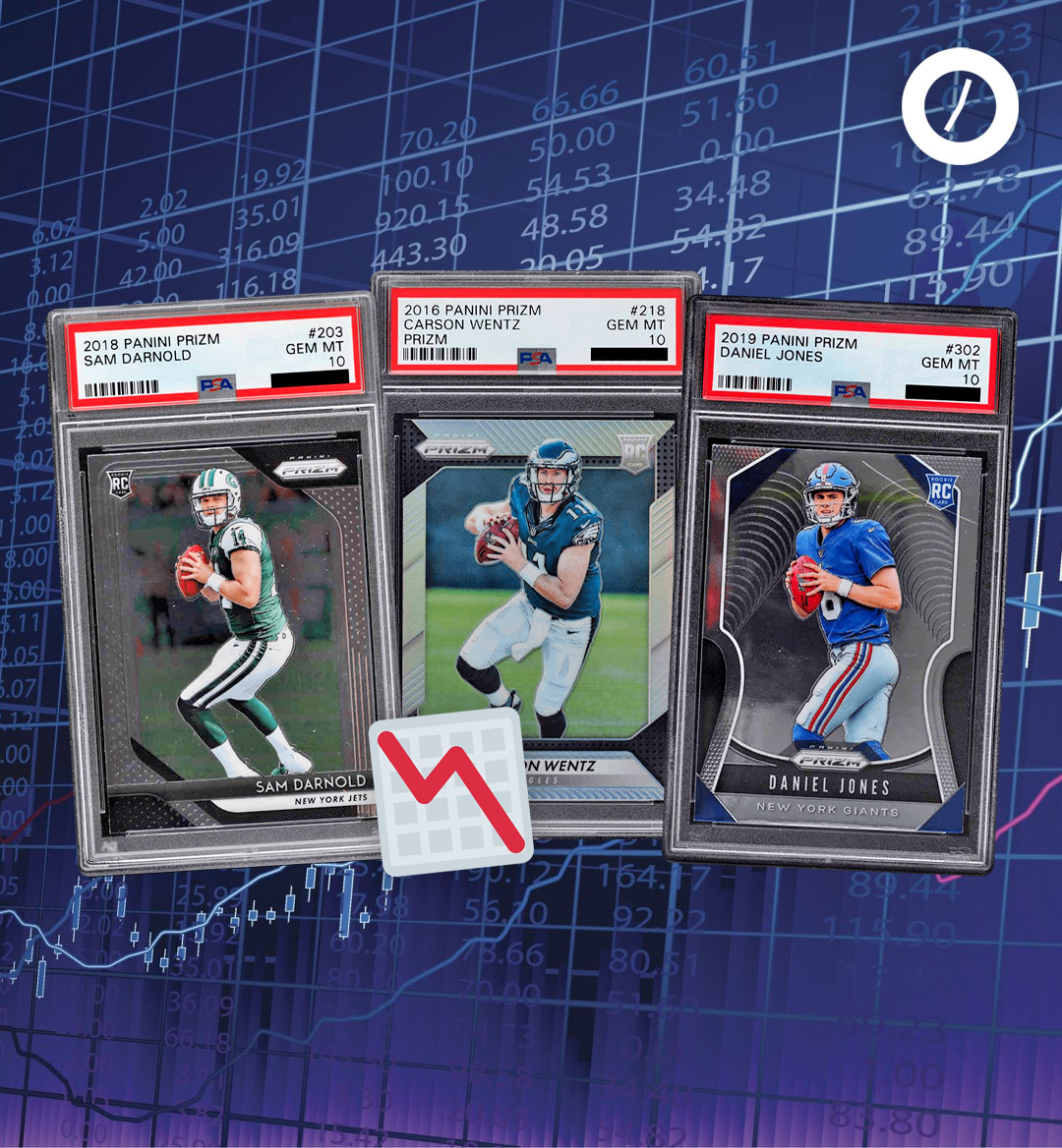 The prices of sports cards can wildly fluctuate for young emerging star quarterbacks on a week-by-week basis. A few good weeks is all it takes sometimes for collectors to decide "this guy could be the next Joe Montana" and shoot the value of his cards to the moon. A few poor weeks is all it takes at times to cause a huge correction in their value.

In the last few years, fans of the Jets, Giants, and Eagles were bubbling with excitement over their young signal-callers. Each of them showed enough potential early in their careers to have fans dreaming of locking them in as their franchise quarterback for the next 10-15 years. The market reacted, and prices went up according to what these players could be, rather than what they had already become.

After slow starts to the 2020 season, we have seen Sam Darnold, Daniel Jones, and Carson Wentz's card markets crash. The Eagles spent a 2020 2nd round pick on Jalen Hurts, and his presence will loom large if the Eagles don't improve on their sub .500 record. Sam Darnold has regressed for his 0-9 Jets, to the point that fans are now openly rooting for the team to lose games and secure his replacement (Trevor Lawrence). Although he was just selected in 2019, Daniel Jones continues to be a turnover machine, and fans of Big Blue are beginning to get impatient with his development.

With values currently so low, you might be asking yourself if any of the three are salvageable and if now might be a good time to buy, so let's take a deep dive into each player. 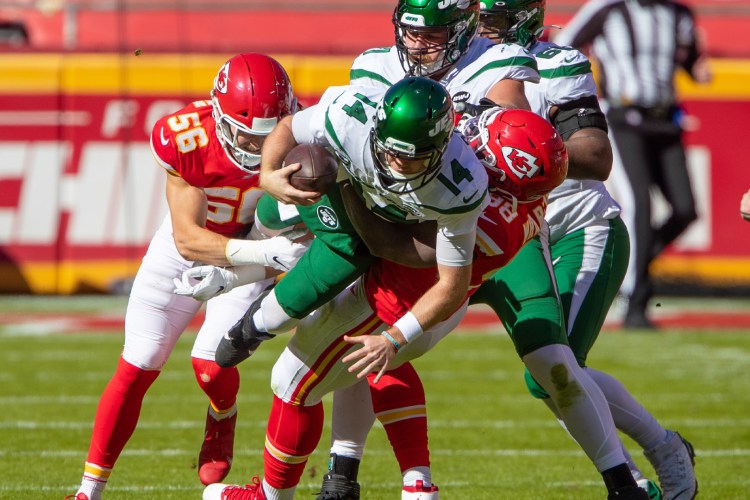 Sam Darnold is the textbook case for what will happen to a young talented quarterback if he is put in an impossible situation. The Jets have done Sam no favors, firing their head coach after his rookie season, forcing him to learn another playbook, and surrounding him with the worst coaching staff in football for the past two years.

Further, he has had absolutely no weapons to throw the ball to, except for Robby Anderson, who the Jets let walk out the door this offseason, and has played behind one of the worst offensive lines in the game. The regression he has experienced in year three was not only predictable; it was a near certainty. Jets fans have written Sam Darnold off and are calling for the team (currently 0-9) to draft his replacement (Trevor Lawrence) if they secure the top pick in the 2021 draft.

Darnold's time in New York is over after the season. The only remaining question is, can he be salvaged?

I say, yes. Darnold has shown enough talent and potential in his first three years for me to think he doesn't have a chance of becoming an outstanding quarterback if he is traded to a winning culture. Imagine if he wound up in San Francisco with Kyle Shanahan? What about Dallas with that o-line, those receivers, and Zeke? New Orleans with Sean Payton, Michael Thomas & Kamara? Tampa? The list goes on and on. 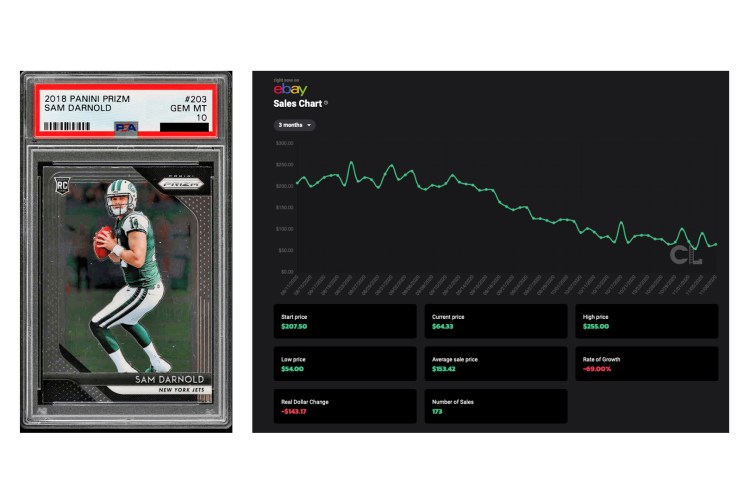 Darnold's card market has absolutely crashed this year. Take a look at this snapshot.

Summary: BUY! How much lower can Darnold's cards get? If there was ever a time for a low-risk, high-reward investment, this is it. Sam is still only 23 years old and has all of the tools to be great. It would be such a shame if his three years with the Jets ruined what could have been a phenomenal career, but he still has plenty of time to right the ship. His services will be in demand the second the Jets put him on the trade block. 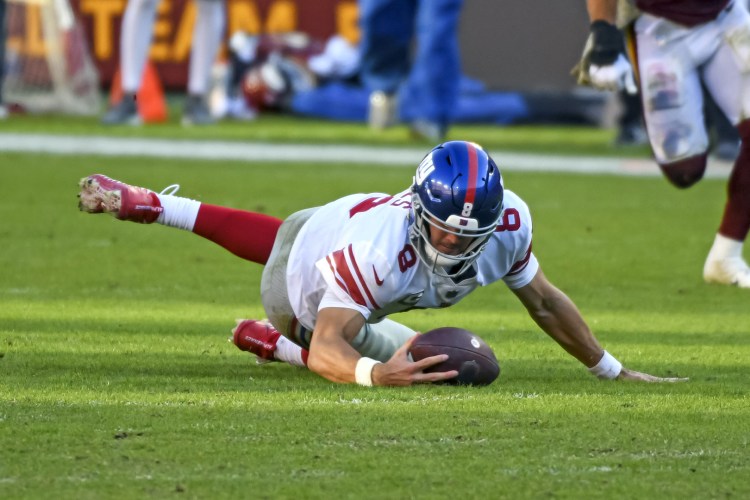 Daniel Jones, the other 23-year-old quarterback in New York, was Darnold's polar opposite upon arrival. The Jets were thought to have been blessed by the football gods for Darnold to slip to the 3rd pick, while most Giants fans were inconsolable when Big Blue selected Jones. General Manager Dave Gettleman staked his job on the thought that Jones would be a franchise quarterback, and the early returns have been a mixed bag.

"Danny Dimes" flashes just enough potential at times to make you understand why Gettleman made such a bold move but has also had major turnover issues that have cost the Giants many games. When you combine that with his 2-7 record in his 2nd season, fans have begun to turn on him. If the Giants wind up with the #2 pick in the draft and Justin Fields was sitting there, would they move on from Jones after only two seasons? That would depend on a lot of factors. If Gettleman is still there, the answer is likely no. If he is fired, there is a good chance that a new GM would want to start fresh with a new quarterback, and then all bets are off the table. 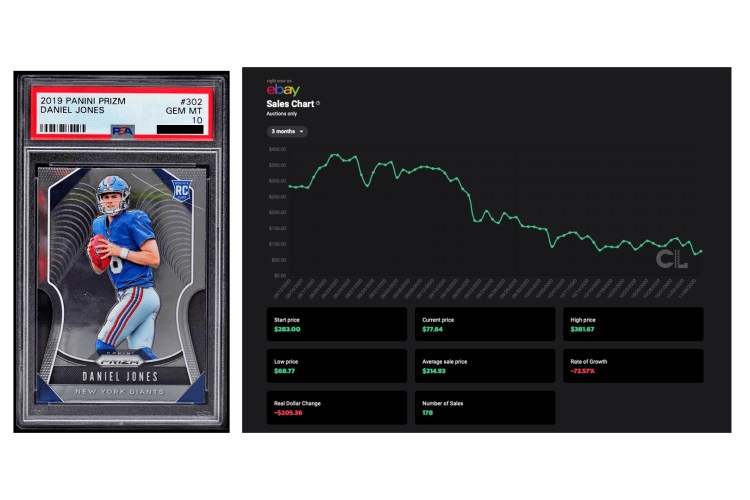 Summary: Hold. This is another example of a complete tanking of value in just 3 short months. Amazingly, Jones' market cap was twice that of Darnold's entering the season, just for some perspective on how high buyers were on his potential. That said, if the Giants decided to move on from Jones in the offseason, who would be more in demand and bring back more in a trade? Darnold or Jones? My money would be on Darnold, which should tell you who executives around the league think is the better player. The chances of Jones staying in New York are MUCH greater than Darnold's, so if you believe that he can turn it around when Saquon Barkley comes back and he has some more weapons at his disposal, I can understand taking a flyer at these prices. However, if I am spending money on either of the current New York quarterbacks, it's Darnold all day. 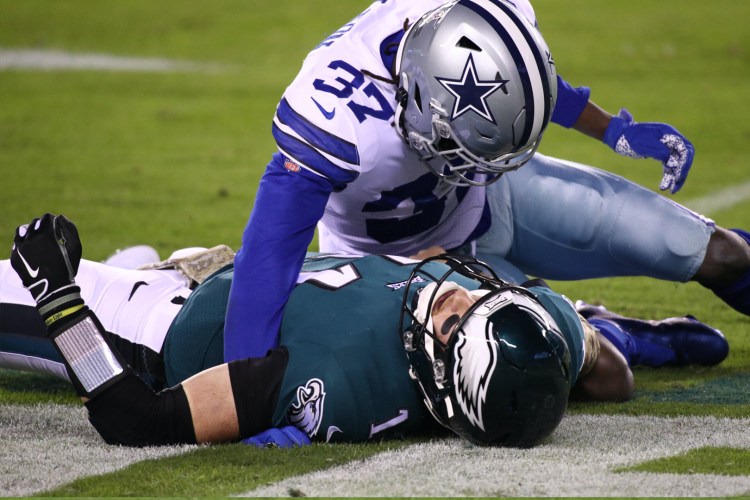 Carson Wentz has been by far the most successful pro of the three quarterbacks in this article. After being selected 2nd in the 2016 draft, Wentz broke the league record for most completions by a rookie, leading the team to a 7-9 record.

Wentz was an MVP candidate in his second season, throwing for 33 TD's and only 7 INTs. However, his season was cut short after tearing his ACL in week 14, and was forced to watch as his backup (Nick Foles) led the Eagles to their first Super Bowl Championship.

Since he returned from that injury, Wentz has been mostly good, but the team has experienced very little success. In 2018 and 2019, he threw for a total of 48 TDs and 14 INTs with a 98 QBR. However, in 2020 he has greatly struggled with 4 TDs & 7 INTs while the Eagles currently sit at 3-4-1. Further complicating matters for him is that the team selected quarterback Jalen Hurts in the 2nd round of the 2020 draft and have been devising ways to get him in the game. As we all know, in Philadelphia, the backup quarterback is always the most popular guy in town. If Wentz continues to struggle, will Hurts get a chance to start before the end of the season? 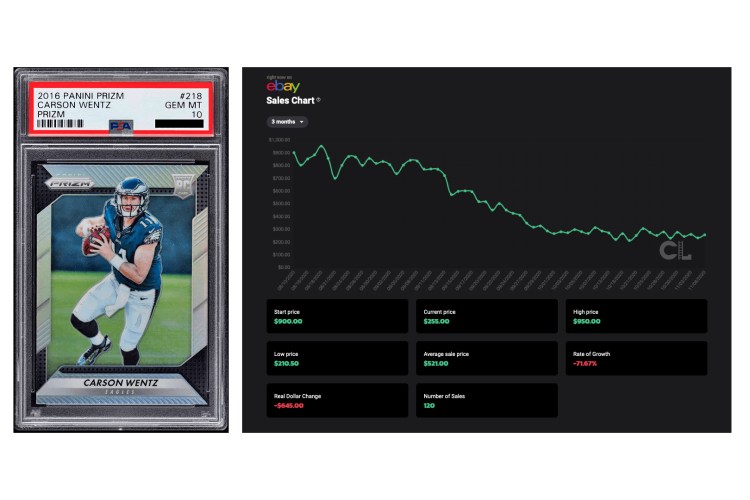 Summary: BUY! Cue the Tom Petty music, because the price of Carson Wentz is "Free Falling". So why am I a buyer? Let's use the same metric as I did for Daniel Jones. If you were an NFL GM, and all three teams (Jets, Giants & Eagles) decide to move on from their quarterbacks this offseason, which one are you taking? The upside of Darnold? Or would you take a shot on Wentz, who has a career 90.1 QBR, 109 td's and only 47 int's. Also, I find it hard to believe that the Eagles would move on from Wentz considering what they gave up to acquire him (3 top 100 picks in 2016, 2017 1st rounder and a 2018 2nd rounder). 2020 has been a bizarre year in terms of injuries, depth and overall roster management. My money is on the Eagles to bring back Wentz next season and for him to thrive. If that happens and he climbs back up to his 2020 preseason prices, you could be looking at a nice 4x return.

Everything We Learned from the 'Wednesday' Netflix Trailer