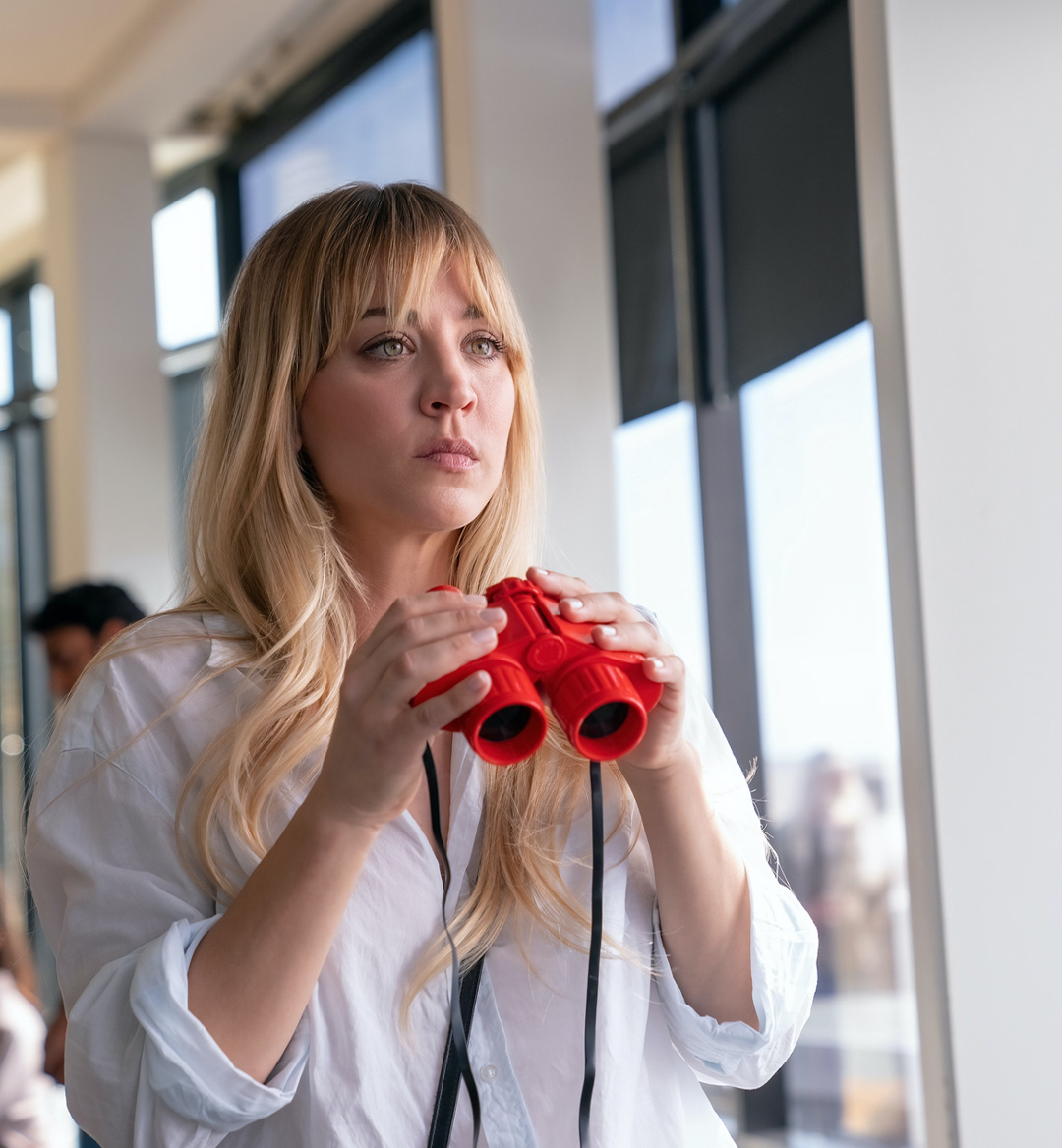 Money, deception, and slashed throats. No, this isn't just what happened at the gas station across the street from my college during senior year—it's also one of the main plots of The Flight Attendant on HBO Max. Ripped from the headlines? Maybe. Okay, no, but how else was I going to work in the fact that I was too scared to go back to my favorite Mobil station and get slush puppies after that happened?

If you were like me and went into The Flight Attendant knowing absolutely nothing about the plot except for the fact that Kaley Cuoco would be portraying an alcoholic flight attendant, the opening 12 minutes of the first episode were probably a pretty hefty smack in the face.

Like, there's a man lying in bed with his throat slit open—what's that all about? 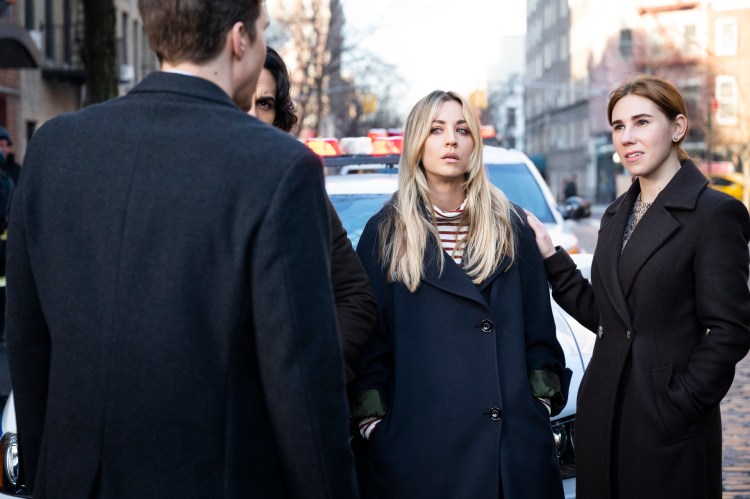 As a whole, the entire first season of The Flight Attendant is centered around this moment with a flight attendant, Cassie Bowden (Cuoco), retracing her steps through unwanted flashbacks and conversations with the very man who's now dead: Alex Sokolov (Michael Huisman).

On a flight the day before this all went down, Bowden met Sokolov, as they flirted with each other while she waited on him. Although it's a bit frowned upon, she decided to take him up on his offer to hang out in Bangkok afterward, and they eventually ended up in bed together after a long night of drinking.

However, when she woke up the next morning in his hotel room, she found herself lying next to a dead Sokolov, who was sitting in a pool of blood. As Bowden blacked out the night before, she had no idea what was going on, but immediately (and recklessly) decided to clean up the scene, except for Sokolov's body, which she left in bed to be found later by the hotel's cleaning services.

As news of the murder started being picked up by news outlets, Bowden and the other flight attendants were brought into questioning by the FBI, who attempted to draw out details from each of them. They were skeptical of Bowden's story, with one of the agents basically believing that she was fully behind Sokolov's death.

Upon returning home to New York City, she tells the entire story to her best friend, Annie (Zosia Mamet), who also works as a slightly-sketchy lawyer. Between Bowden, Annie, and Annie's boyfriend, Max (Deniz Akdeniz), they're able to put some clues together and make a bit of headway in the mystery, which becomes more and more complicated as the episodes progress.

At the same time as all of this, Bowden drunkenly meets a man named Buckley (Colin Woodell) at a bar, and they start up a casual relationship. It takes quite a while for her to realize that Buckley was behind Sokolov's murder, as he has been following Bowden around ever since she landed in Bangkok. As she has a scheduled flight to Rome, Buckley decides to follow and confront her there. He almost kills her in a hotel room, but her friend and fellow flight attendant, Enrico, ends up busting in and shooting Buckley just in time to save her. Later on, it turns out that Enrico is actually an undercover CIA agent who has been working as a flight attendant and keeping tabs on Megan (Rosie Perez), the head flight attendant, who has been fairly sketchy throughout the entire series.

While the main plot follows Bowden's journey to figure out who's responsible for killing Sokolov, bits of another plot are sprinkled in here and there, which revolves around Megan. Until the last one or two episodes, it's tough to tell what she's actually up to, though it turns out to be her casually engaging in corporate espionage, which includes her stealing documents from her husband's company to give to the Korean government.

Ultimately, we leave things off in Season one with Cassie hinting at becoming sober as well as becoming involved with the CIA as an asset. 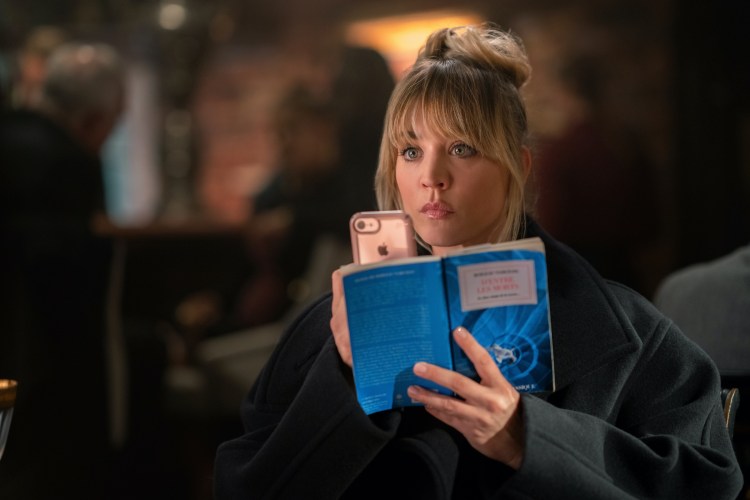 Sporting bangs and a one-year-sober chip from Alcoholics Anonymous, Bowden has completely uprooted her life, moving from New York City to Los Angeles seemingly effortlessly. It feels like everything has changed in just one year, but actually, basically, nothing has.

Aside from being sober, Bowden is following her same instincts, which—as we've seen time and time again in Season one—have gotten her into some pretty tough binds. And while she's still working as a flight attendant, she's got a bit of a new side hustle going on that was hinted at in the finale of the first season: working as a civilian asset for the CIA. Basically, the CIA assigns her a person to keep an eye on for a period of time and her job is to take account of the situation and report back to her agent. In this role, she's not supposed to interact with the asset—her only job is to observe from a distance. Emphasis on observe.

At the start of Season two, she's given a new asset as she's headed off to Berlin. Now, with this being the Cassie Bowden that we all know and love, she's going to approach this new job as if she were a high-level detective with the FBI. In fact, her reporting officer has even called her out in the past, forbidding her from getting too close to her assets.

Ignoring those rules, Bowden decides to strike up a lively conversation with her asset at the bar, later following him around Berlin and taking multiple photos of him throughout the day. But the thing is—she notices something a little different on that first night. While spying on his hotel room from across the way (okay, we're definitely breaking those civilian assets rules here), she notices him with a blonde who looks very similar to herself—including having an exact copy of the tattoo she has on her back.

Freaked out by this, she heads back down and tracks her asset, who has left his hotel room. Right as he's getting into his car, a massive explosion goes off and he's instantly killed.

Now that's quite the premise to follow for the remainder of the season, as we've got some serious things to work with here.

While some devoted viewers of the show were concerned that Bowden's being sober would make the series less interesting, it basically has had the opposite effect. Instead of blaming her visions and conversations with Alex on her alcohol consumption, it's now clear that that wasn't the issue at all; instead, it's just herself and what triggers her.

This time around, she's having conversations with her old self, who's constantly donning party dresses and drinking. In one of her AA meetings, Bowden is particularly disturbed by a man who's poking holes in her "everything is better now" way of life.

"I remember early in my recovery—that f***ing pink cloud where I was kind of just stupidly naive and thought everything was 'pretty great,'" he said.

While it doesn't feel like we're going to see Bowden start drinking again as of right now, this sentiment feels more so like it will apply to her paranoid psyche moving forward. Everything did seem to be going well in her life up until the explosion in Berlin, though even unrelated to that, there were a few moments where it feels like Bowden might just be putting up a front.

My hope for this season is that we'll go even deeper into her changing state of mind—maybe not with childhood flashbacks as we did in the previous season, but more with introspection into herself through talking to the "Old Cassie."

And on top of what's going on with the explosion, it looks like we'll also be revisiting a fan favorite from last season: Megan. We were only given smaller glimpses into Megan's covert operations in Season one, but it seems like her plot will be given a larger spotlight this time around, as she has been basically missing for a year. It's actually unclear whether or not she's currently hiding out or has been kidnapped—you know, the usual.