The Top 19 F1 Drivers and Cards to Look Out For 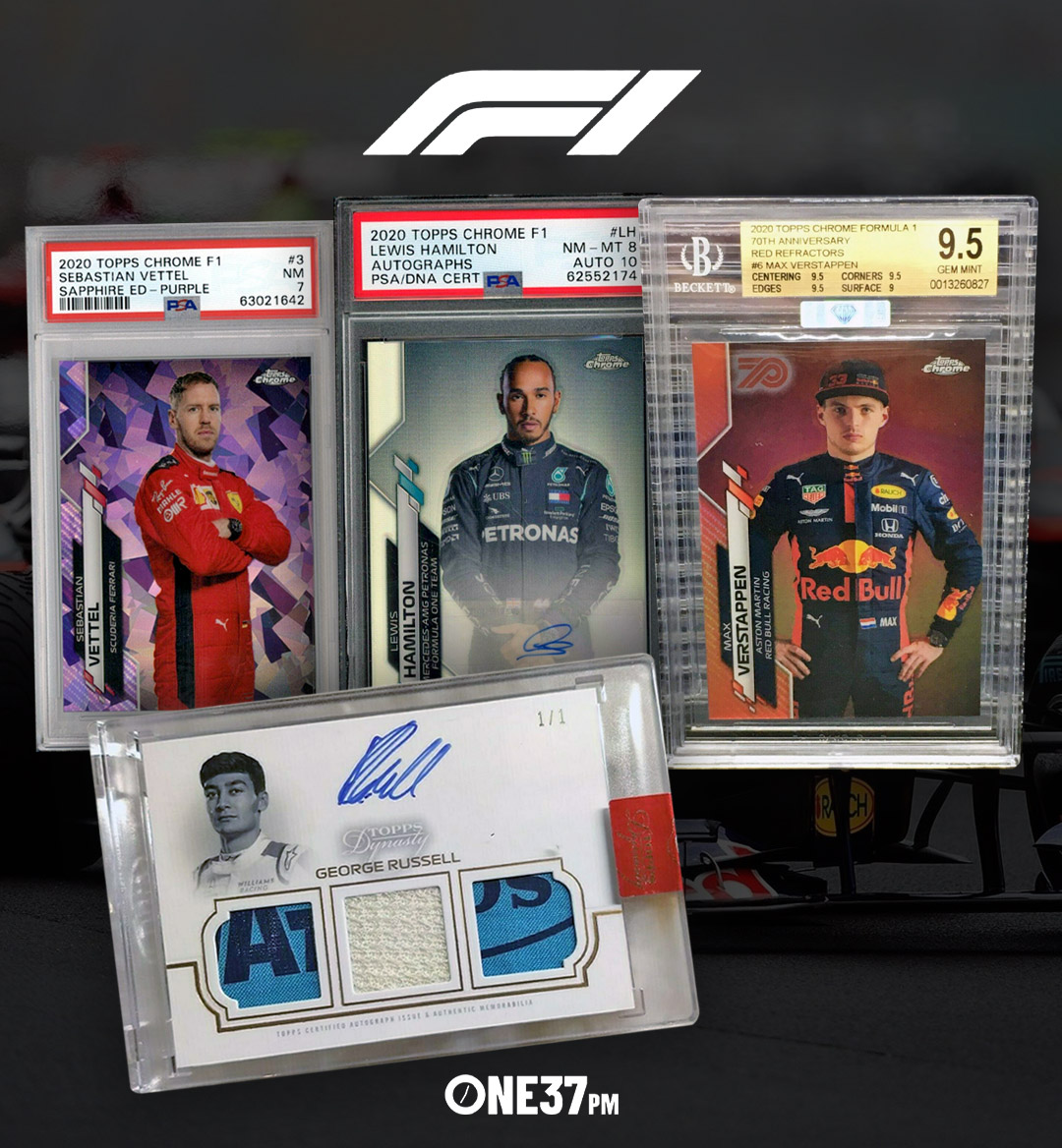 If you tuned in at any point to watch the U.S. Grand Prix at Circuit of the Americas in Austin, Texas on October 24th—Formula 1’s return to the United States after a two-year absence—you were probably blown away by the 360,000+ people in attendance.

However, when you combine the fact that the wildly popular Netflix show, Formula 1: Drive to Survive, is doing big numbers and ESPN/ESPN2 viewership for live races is up 51 percent through the first 15 races in 2021 compared to 2020, you start to realize that something really big is happening here.

Further illustrating their growing popularity in the United States, F1 signed a 10-year deal in April to host the Miami Grand Prix at Hard Rock Stadium (home of the Miami Dolphins), with plans to expand the footprint in cities such as Las Vegas and New York in the coming years.

Per Sportico, the U.S. now represents F1's fastest-growing market, with 36 million fans and a TV reach of 28 million. With that type of explosive growth, it comes as no surprise that the emerging F1 card market is also white hot. However, with limited sets and products compared to the three major sports in America, purchasing cards of your favorite drivers can be a bit more difficult to find than your typical baseball or basketball cards.

This list below gives you the current top 19 drivers, as well as their most expensive recent (last three months) sale on eBay.

(The order was compiled using the 2021 Driver Standings as of date of publication.) 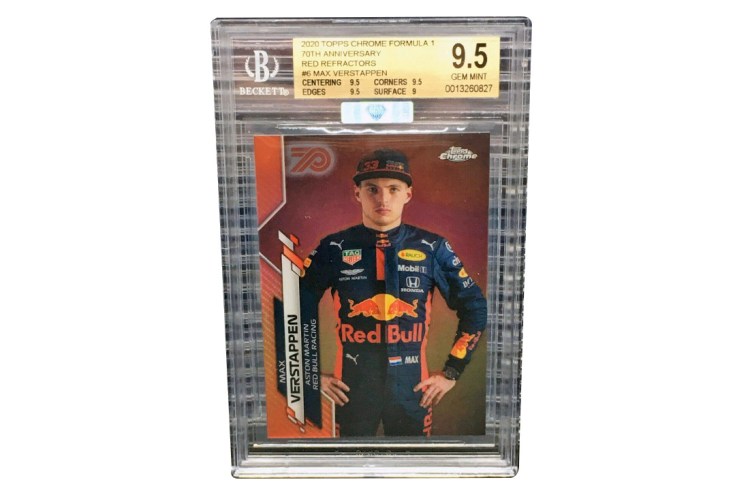 This 70th Anniversary Red Refractor was super short printed, with one coming in every 848 packs, according to Cardboard Connection. These cards are notoriously tough to grade, so it’s not surprising that a BGS 9.5 sold for $15,000. 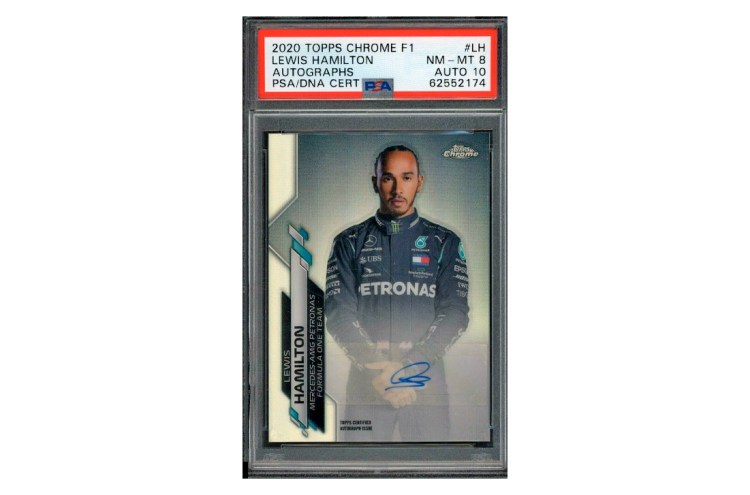 Sir Lewis Hamilton is the GOAT, currently driving for Mercedes after five years with McLaren. He's won seven World Drivers’ Championships titles (tied with Michael Schumacher for most ever) and has the record for most wins (100), pole positions (101) and podium finishes (178).

In 2020, he was listed on the Time Magazine “100 Most Influential People Globally” and was knighted at the 2021 New Years Honours.

This particular card is numbered to just 58, and with a solid PSA 8 grade, is currently the most expensive F1 card sold on eBay in the last three months. 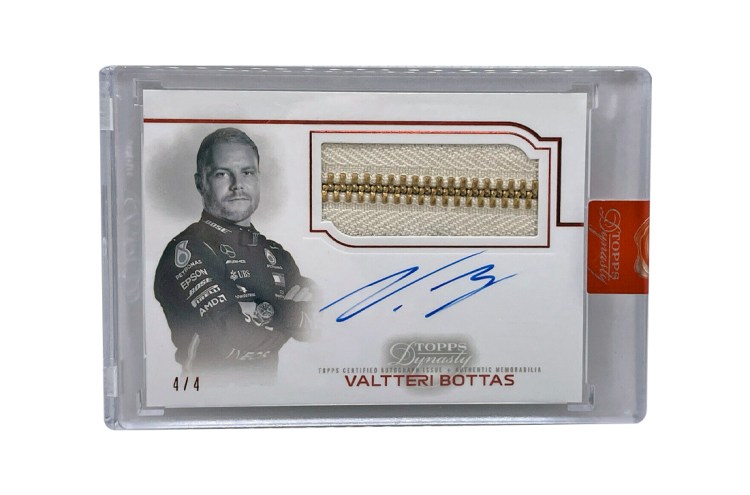 Bottas is a Finnish racer driving in his final year for Mercedes before switching to Alfa Romeo Racing in 2022. He's won 10 races, with 65 podiums and 1,697 career points to his name since his first entry at the 2013 Australian Grand Prix.

Topps Dynasty is a premium set that includes all sorts of relics and patches, making for extremely collectible cards with incredible eye-appeal. This particular card has a piece of Bottas’ suit zipper and was numbered to just 4. 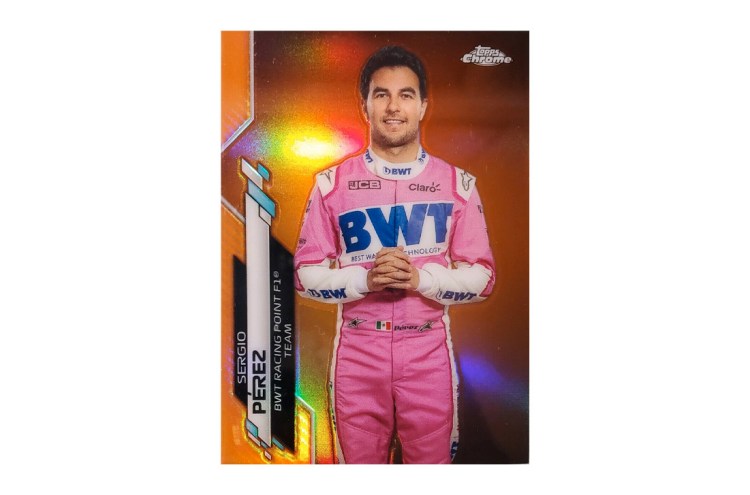 Sergio Perez (nicknamed “Checo”) is a Mexican driver who currently races for Red Bull after stops with Sauber, McLaren Force India and Racing Point. He has only two career wins, with the first one coming at the 2020 Sakhir Grand Prix after breaking the record for most starts (190) before winning a race. He's since won the 2021 Azerbaijan Grand Prix.

The Orange Refractor in the 2020 Topps Chrome set is one of the most rare, numbered to just 25. 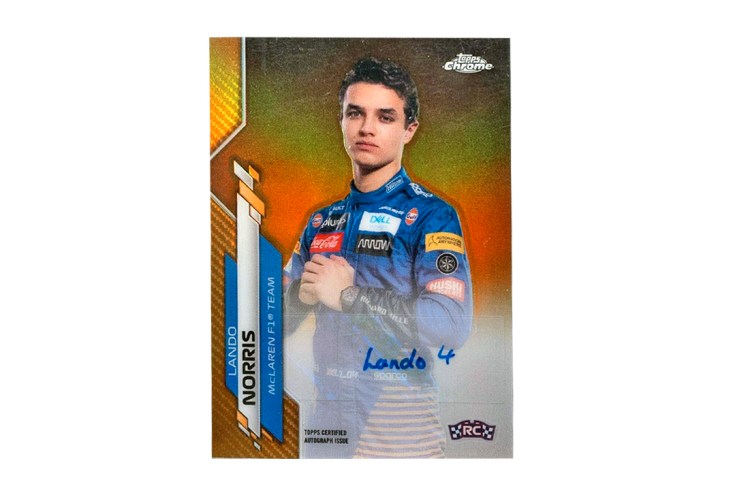 Lando is a 21-year-old British racer that drives for McLaren. He has yet to win an F1 race, but has five podiums and a long list of F4, F3 and F2 wins before making his first F1 appearance at the 2019 Australian Grand Prix.

There are only 50 of these Gold Refractor Autos and when you combine Norris’ age, popularity and potential, the $7,284 price tag seems fair. 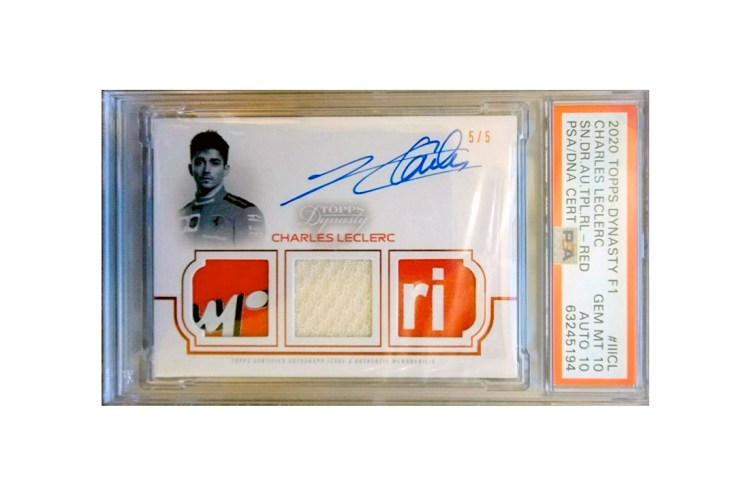 Leclerc is a 24-year-old Scuderia Ferrari driver from Monaco that made his first F1 appearance at the 2018 Australian Grand Prix, after winning the Formula 2 Championship in 2017. Since then, he has two F1 wins—most recently at the 2019 Belgian Grand Prix—and 13 podiums to his name.

This card, numbered to just 5, is another from the high-end Topps Dynasty set, featuring three separate patches from his racing suit as well as his autograph. 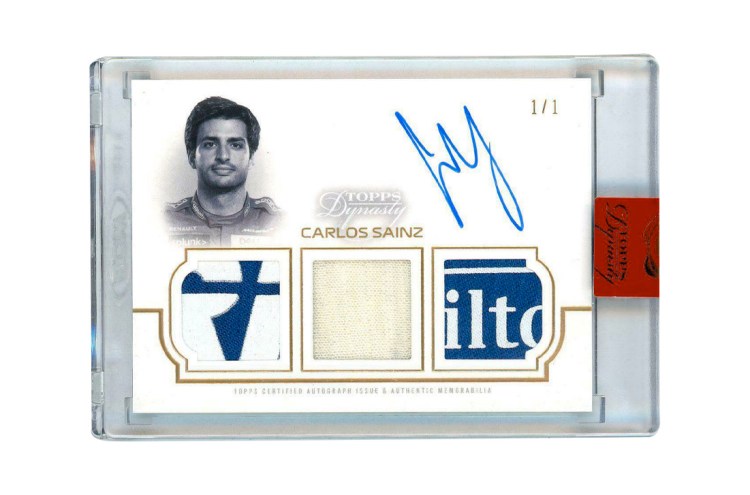 The 27-year-old Sainz is Spanish racer, and is Leclerc’s teammate at Ferrari after driving previously for Torro Rosso and McLaren. He has yet to win an F1 race since his first entry in the 2015 Australian Grand Prix, although he does have five podiums.

This Topps Dynasty Triple Logo Patch Auto /1 is one of Sainz’s most sought-after cards, as it's the only one of its kind. 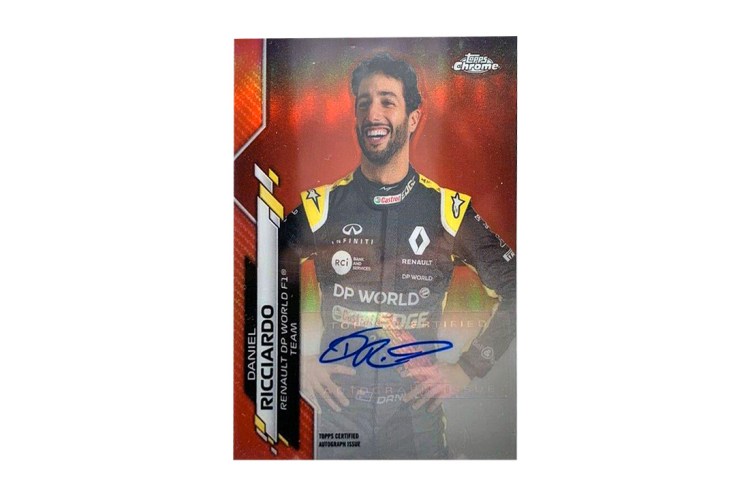 The 32-year-old Australian-born Ricciardo drives for McLaren after previously being with Red Bull’s sister team Toro Rosso. He has eight grand prix wins and 32 podiums on his resume, the most recent at the 2021 Italian Grand Prix. His car number (3) is in honor of Dale Earnhardt, the NASCAR driver he idolized as a kid.

This Topps Chrome Red Refractor Auto is numbered to just 5, and feels like a very good buy at the $2,299 price tag considering its rarity and Ricciardo’s popularity. 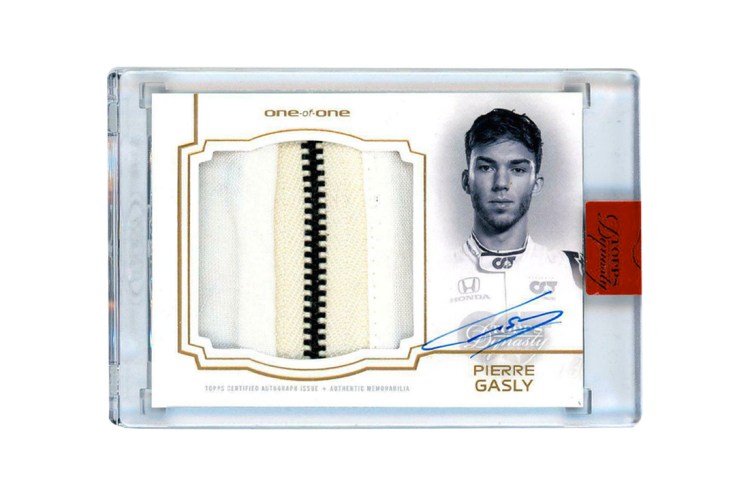 Gasly is a 25-year-old French driver for Scuderia AlphaTauri. His first F1 appearance took place at the 2017 Malaysian Grand Prix, and since then he's gone on to win one race (2020 Italian Grand Prix), and three podiums. He is also childhood friends with the previously mentioned Charles Leclerc.

This card is another one-of-a-kind from the Topps Dynasty set, featuring a zipper relic from his suit alongside his auto. 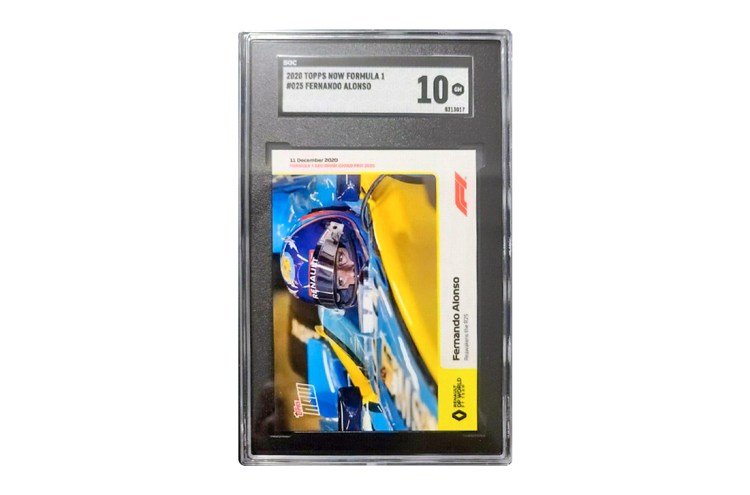 The 40-year-old Alonso is one of the oldest current drivers in F1, making his debut at the 2001 Australian Grand Prix. The Spanish racer drives for Alpine and while he has had a long, decorated career featuring 32 wins and 97 podiums, he hasn’t won a race since the 2013 Spanish Grand Prix.

This 2020 Topps Now card is one of his only cards on the market, as he does not have a card in the Topps Dynasty or Topps Chrome/Sapphire sets. 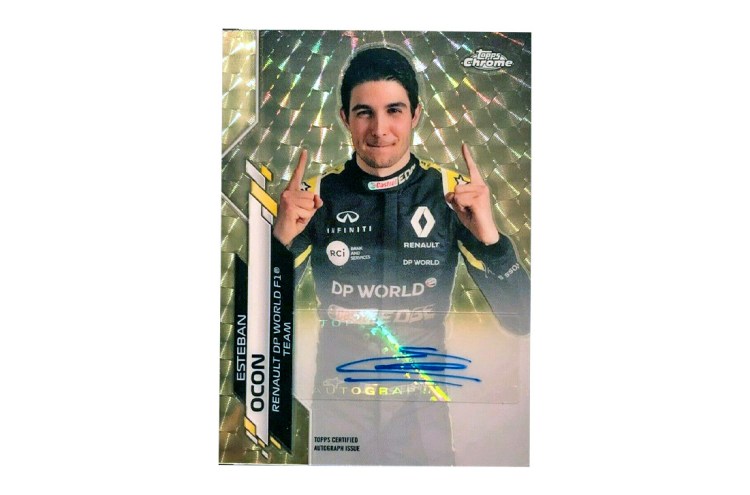 Alonso’s teammate at Alpine, Ocon is a 25-year-old driver from France that first appeared on the F1 circuit at the 2016 Belgian Grand Prix for Manor Racing. He has just one victory, at the 2021 Hungarian Grand Prix.

This is the first Chrome Superfractor on the list, selling for $6,500 even though Ocon is not a huge name, illustrating just how collectible these Superfractors are. 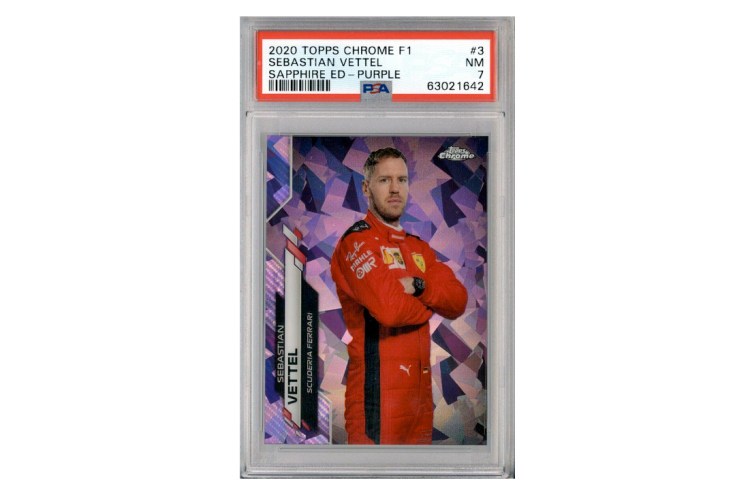 The 34-year-old Vettel is highly decorated, with 53 wins and 122 podiums since his first entry in the 2007 United States Grand Prix. The German driver—racing for Aston Martin Mercedes—previously was with Red Bull, where he won four consecutive titles from 2010-2013. His 2010 title made him F1’s youngest champion at the time, and he set the record for most consecutive wins (9) and race wins in a single season (13) that same year. While racing for Mercedes in 2017 and 2018, he finished runner-up to Lewis Hamilton and won his last race at the 2018 Singapore Grand Prix.

This Purple Refractor /10 comes from the premium 2020 Topps Chrome Sapphire set. Buyers were obviously not scared away by its PSA 7 grade, considering the $3,150 sold price. 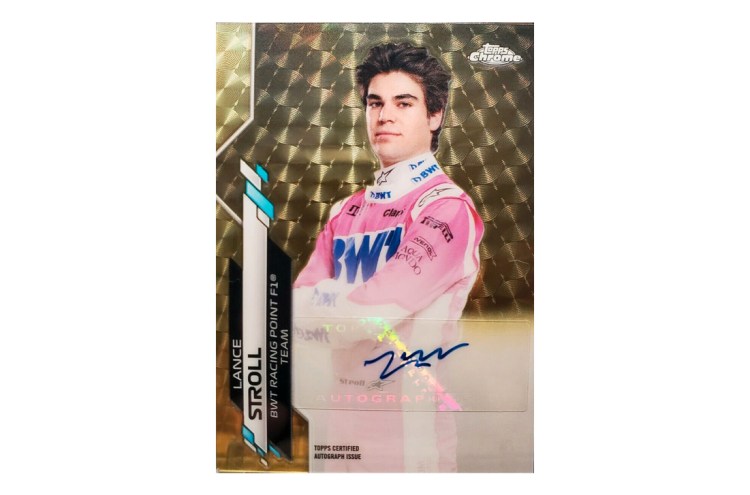 Stroll is a 23-year-old Canadian that races for Aston Martin Mercedes, alongside Vettel. He has yet to win an F1 race, but does have three podiums after winning the 2014 F4 Championship and the 2016 F3 Championship, and he's the second youngest racer to finish an F1 race on the podium at the 2017 Azerbaijan Grand Prix.

This card—like Esteban Ocon’s mentioned above—again illustrates that a driver doesn’t have to do much for their Superfractor to be worth thousands of dollars. 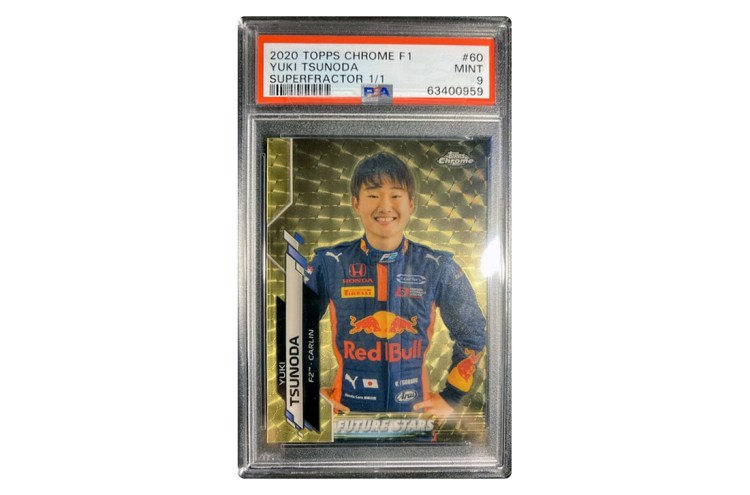 This 21-year-old Japanese racer recently made his F1 debut at the 2021 Bahrain Grand Prix and has 20 career points after finishing in third place in the 2020 Formula 2 Championships. He's Pierre Gasly’s teammate at AlphaTauri, which is owned by Red Bull.

Tsunoda is highly thought of in the ranks, with Formula One’s technical director Ross Brawn calling him “F1’s best rookie in years.” Combine that kind of talk with a Superfractor, and you get a $3,500 sold listing.

Russell is a 23-year-old up-and-coming British driver, making his F1 debut at the 2019 Australian Grand Prix. He has yet to win a race and has just one podium at the 2021 Belgian Grand Prix. However, he was the 2018 Formula 2 Champion and the 2017 GP3 Series Champion and is due to drive for Mercedes in 2022, replacing Vaitteri Bottas alongside Lewis Hamilton.

That he's so far down the list of current points leaders—and has the third most expensive card on this list—should tell you all you need to know about his popularity amongst F1 fans and collectors. 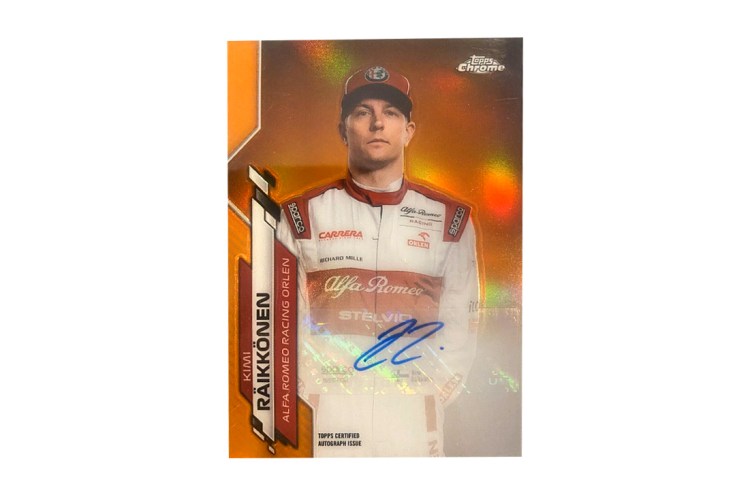 Kimi is the oldest driver on this list at 42 years old, but is also one of the most decorated. The Finnish driver, nicknamed “The Iceman,” drives for Alfa Romeo and has 21 career wins, 103 podiums and 1,873 career points. He won the 2007 Formula One World Championship and is one of only five drivers ever to eclipse 100 podium finishes.

His last win came at the 2018 United States Grand Prix, so his best days are clearly behind him. However, with his legendary status in the sport, will his cards see a rise upon his retirement as fans get a chance to reflect on just how good he was? Only time will tell. 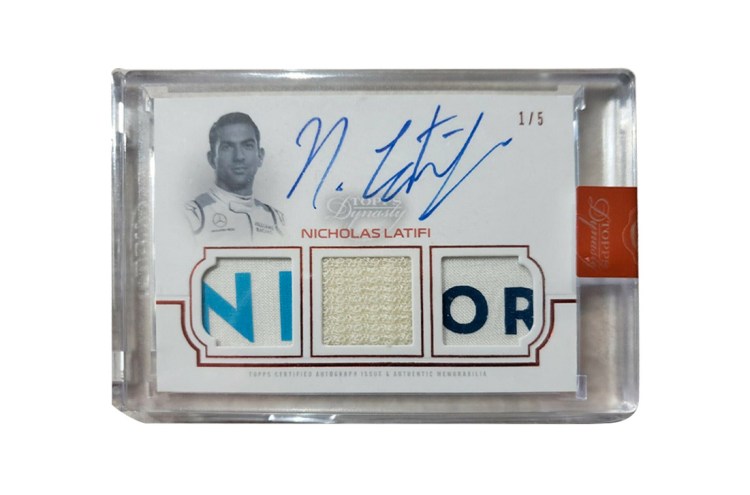 Latifi, another Canadian driver, is 26 years old and made his F1 debut at the 2020 Australian Grand Prix. He was the 2019 Formula 2 runner-up, finishing just behind Nyck de Vries. He only has seven career points, no wins or podiums, and currently drives for Williams-Mercedes. 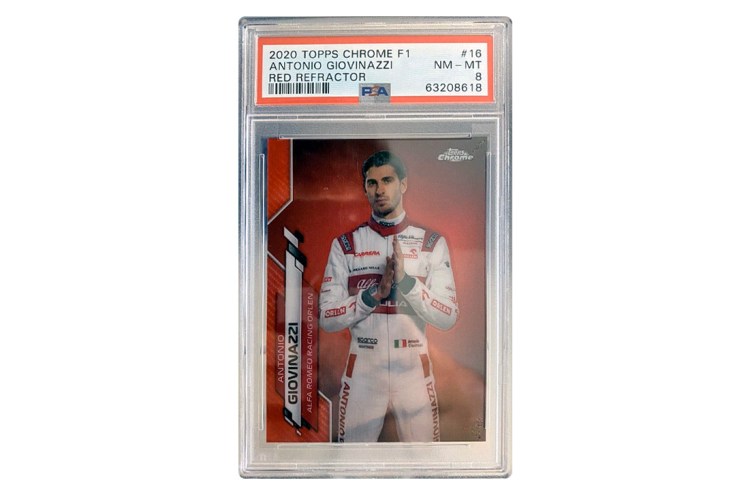 Giovinazzi is an Italian driver for Alfa Romeo Racing and also has no career wins or podiums, making his F1 debut at the 2017 Australian Grand Prix. He was the 2015 F3 European Championship runner-up and the 2016 GP2 Series runner-up. 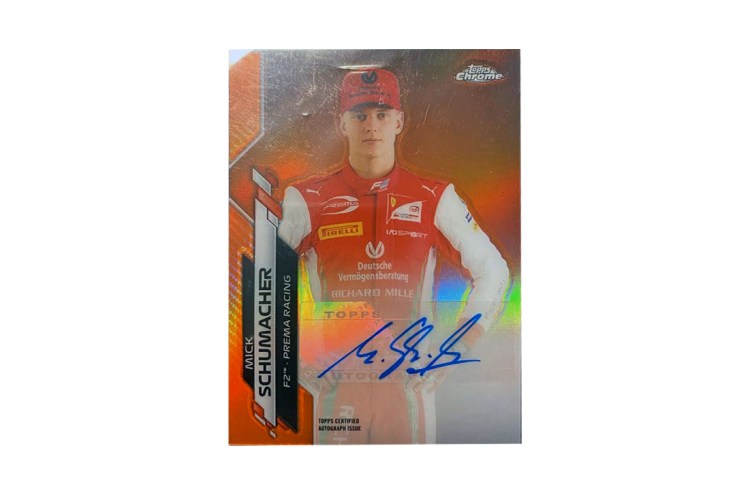 Schumacher is the 22-year-old son of Formula 1 legend Michael Schumacher. The German driver races for Haas, and clearly has the pedigree to potentially be a massive star in the sport. His first F1 race was at the 2021 Bahrain Grand Prix, and he has yet to log any wins, podiums or points. However, as illustrated by this $2,100 sold listing, his name alone could carry his prices until those wins start to come in.