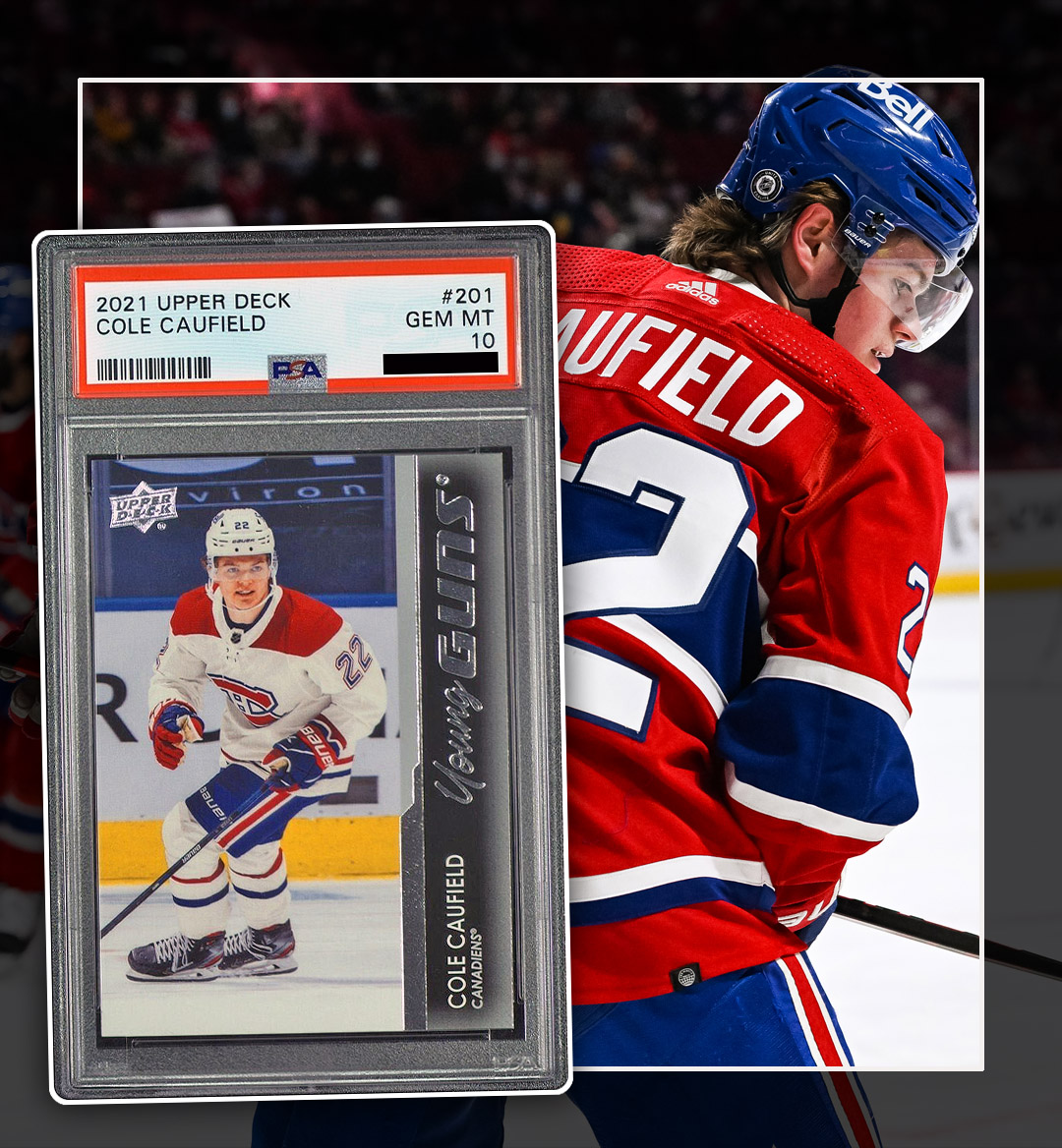 Before I break down the top NHL rookie cards from the 2021-22 class, I want to talk a bit about the current state of hockey.

After an exhilarating season with many nail-biting finishes, hockey fans are beginning to set their sights on games returning this fall.  However, recent off-season acquisitions and buzz circulating the draft have kept the NHL market sturdy in these warm summer months.  To celebrate another exciting year on the ice, we are going to showcase the best rookie cards from the 2021-22 season. But first, it’s vital to give a little background on the modern hockey trading card.

For a newcomer or a lifelong collector, the Young Guns set is a must-have for star players.  What started as a disregarded subset in early 90s products has quickly become the most sought-after piece of cardboard in the sport.  Premier players such as Connor McDavid, Sidney Crosby, Alexander Ovechkin, Nathan Mackinnon, and Auston Matthews all have break-the-bank-worthy Young Guns.  And with 1:4 pack odds, these cards are chased down every year in Upper Deck hobby boxes.

While the Young Guns may win the popularity contest, other rookie cards remain immensely important in the NHL market.  High-end releases such as UD The Cup and Upper Deck Allure make great use of vibrant autographs and multi-colored patches, while products like SP Authentic and O-Pee-Chee Platinum remain staples in the hobby.

With many products not yet in circulation, the Young Guns is currently the most liquid card for the 2021-22 class. So, today we will be highlighting the top NHL rookie cards based on the Young Guns market.  Let’s jump right into it! 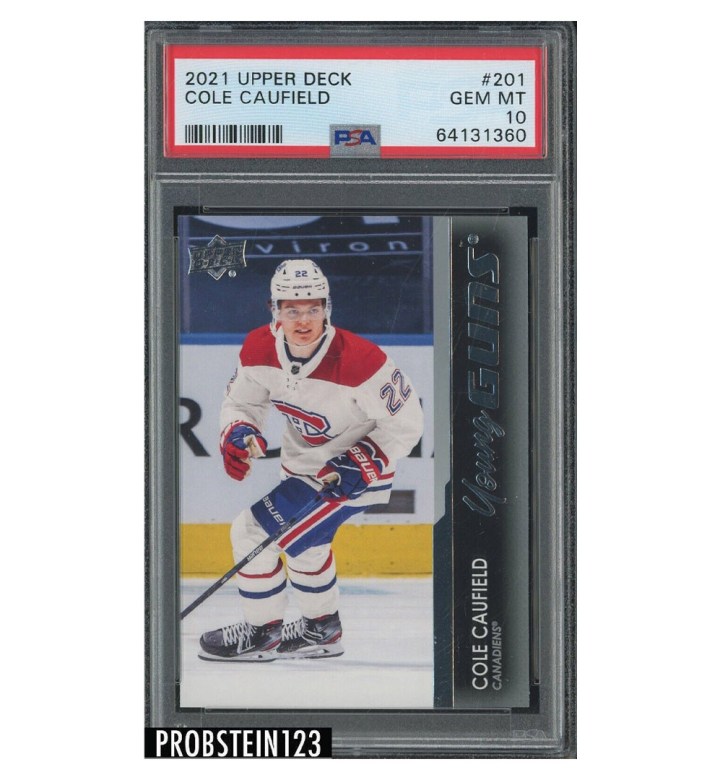 A Wisconsin native, Caufield made his debut back in 2021 and hit the ground (or ice) running.  After a successful collegiate career, many fans and analysts alike expect greatness from the Montreal forward.  His 23 goals and 20 assists this year proved that he could hang with the best of them.
Cole’s Young Guns rookie currently sits at a POP 192 as a PSA 10  While the card only sells for around $70 ungraded, the dark borders and foiling give Gem Mint copies quite the premium.  You can shop for the cards of the Canadiens star on eBay or find him in Series 1 Upper Deck Hockey. 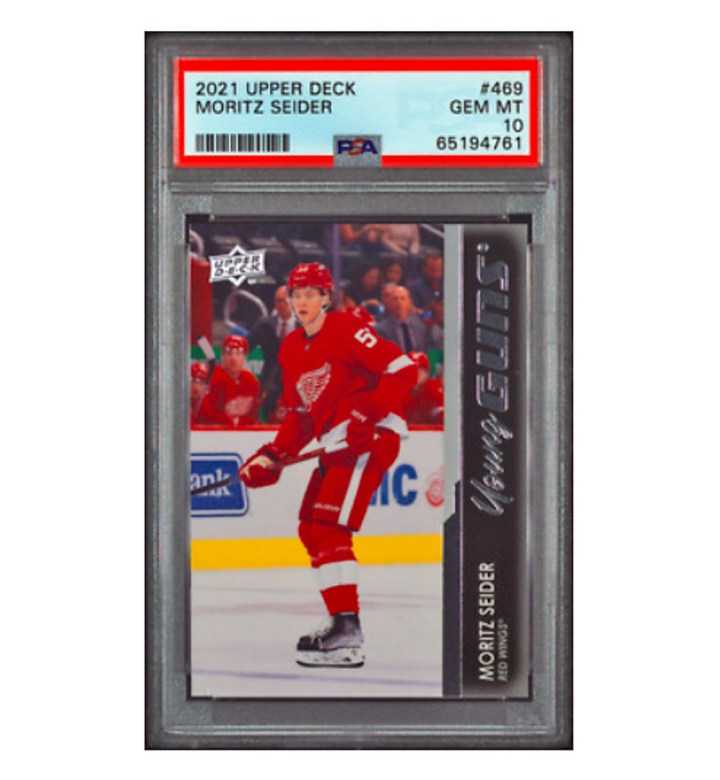 At #2 we have the reigning Calder Trophy winner, Moritz Seider.  Seider, who hails from eastern Germany, dazzled the league this year with his defensive skills.  In addition to his work defending perennial scores like Crosby and Matthews, Moritz contributed 50 total points and helped the Red Wings increase their win total by 13 games.

Surprisingly enough, Seider’s PSA 10 Young Guns is only a POP 2.  However, after his well-balanced rookie campaign, that number is sure to increase.  A recent copy brought $513 at auction in July. Links to Seider’s YG rookie can be found here. 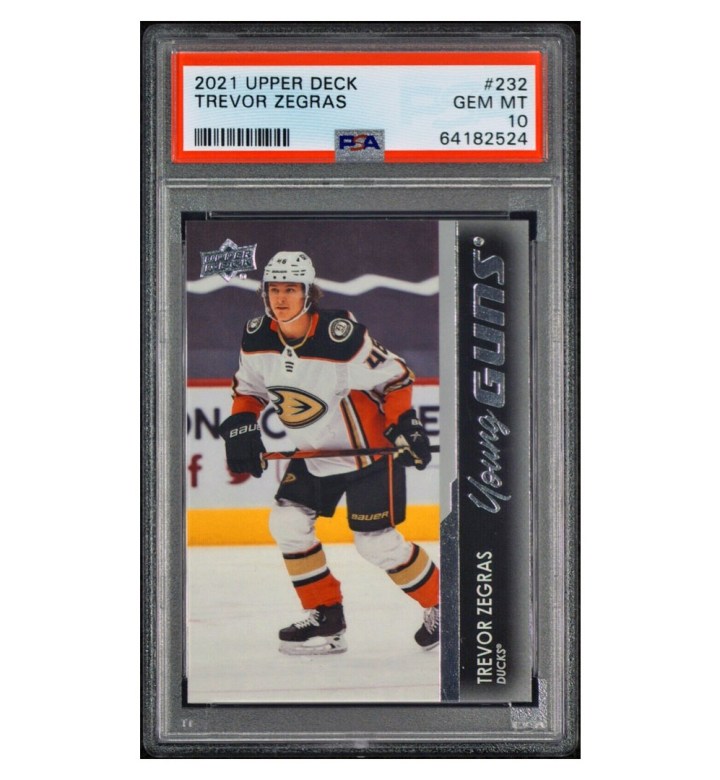 Perhaps the most electrifying rookie last year was Trevor Zegras, the young playmaker in Anaheim.  The Boston University alum finished 3rd in Rookie of the Year voting and was 2nd in points among all rookies.  He also spent much of his campaign filling up highlight reels, including his now viral lacrosse-style trick shot.
If Zegras continues this level of play in the fall, there’s a great chance his market surpasses everyone else on this list.  For now, his POP 78 Young Guns sells for around $400, and many copies can be found for sale online. 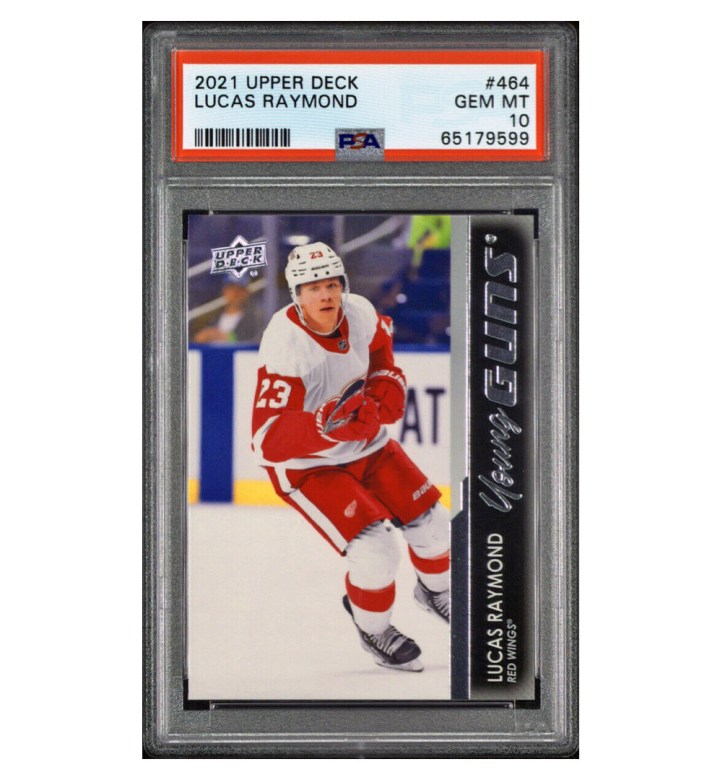 At 4 we have another Red Wing who put up extremely solid rookie numbers.  While Lucas Raymond may have been outshined by Seider on the defensive end, he quickly became a great asset to Detroit’s offense.  Raymond, at only 20 years old, accounted for 57 points this season (23 goals and 34 assists).
Much like his teammate, Raymond only has a handful of PSA 10s in existence (POP 8), so the rarity of his Young Guns contributed to its July sale of $380.  With an increasingly young core, it will be interesting to see what the future holds for the Red Wings with Seider and Raymond at the helm. 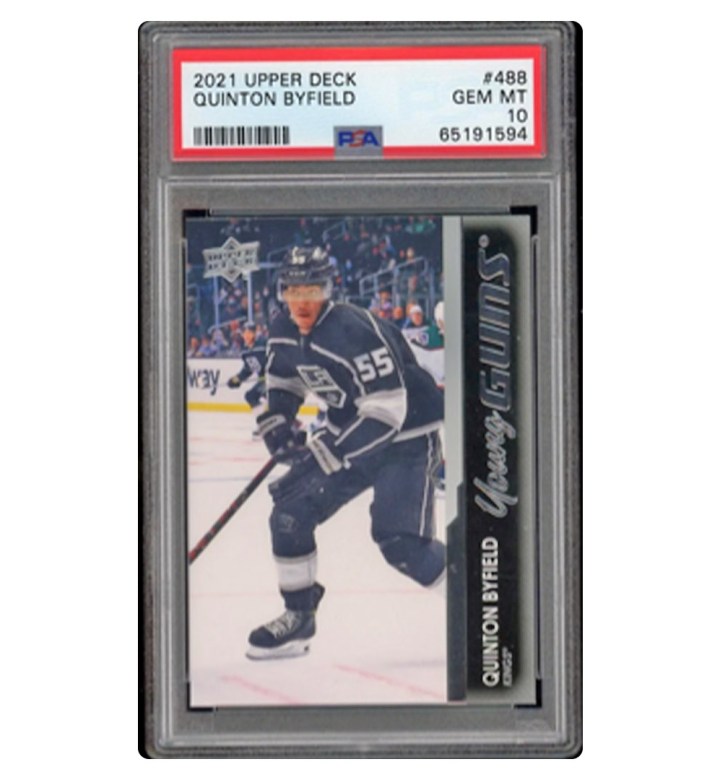 Our 5th featured card is Quinton Byfield’s Young Guns PSA 10, L.A.’s brightest new star.  At only 19, Byfield has received immense hype and drawn comparisons to league leaders.  While it is unknown if Byfield will play to his potential, his POP 1 rookie reached a strong auction price just a few days back.  With the off-season in full effect, we are counting down the days until he and everyone else on our list get to suit up again. 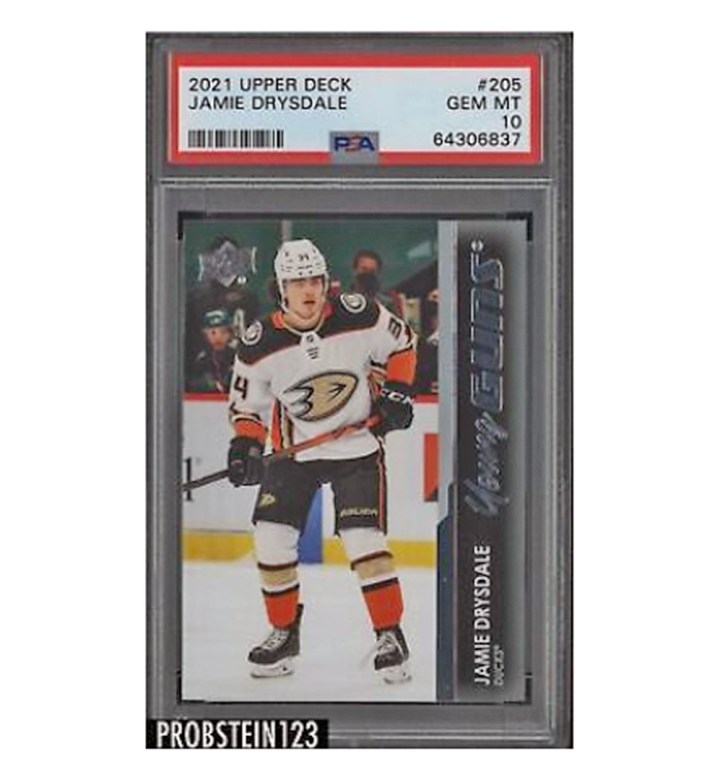 Next, we have our first defenseman on the list: Anaheim’s own Jamie Drysdale.  A first-round pick in 2020, Drysdale was also integral to an improved Ducks team.  He may not possess the flashiness of Zegras, but his abilities in the open field have put the league on notice.
This Series 1 rookie is only a POP 8 and currently trades in the $180 range.  You can shop for 2021-22 UD boxes here and chase after all the emerging stars on our list. 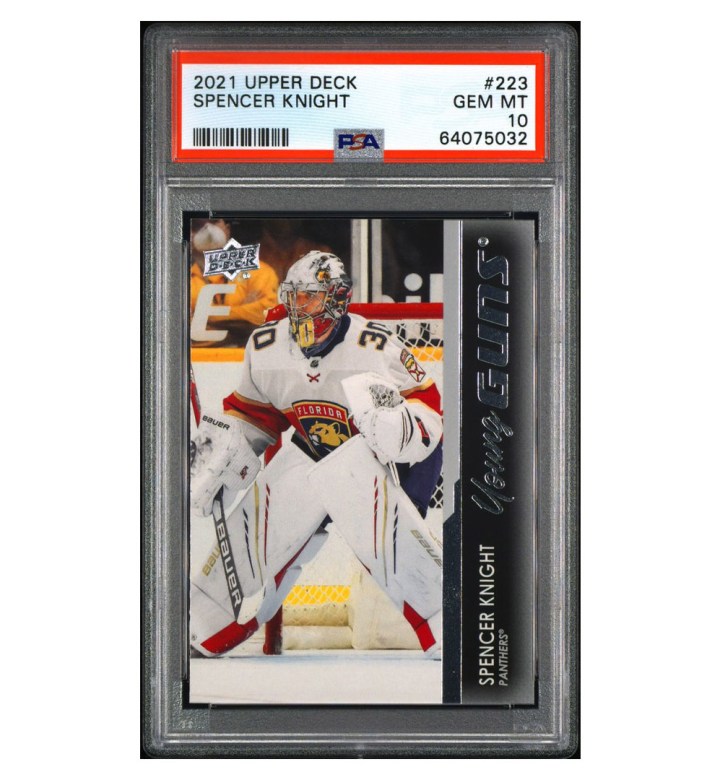 Here we have the first goalie appearance on the list.  Spencer Knight, a Connecticut native, had a few outstanding stretches in his rookie campaign.  This includes a six-win month of April, which earned him Rookie of the Month honors. Unlike others on the list, Knight contributed heavily to one of the best teams in hockey, giving him even more primetime spotlight. Knight’s Young Guns PSA 10 is registered as a POP 47, and we are eager to see how it trends during his upcoming sophomore season. 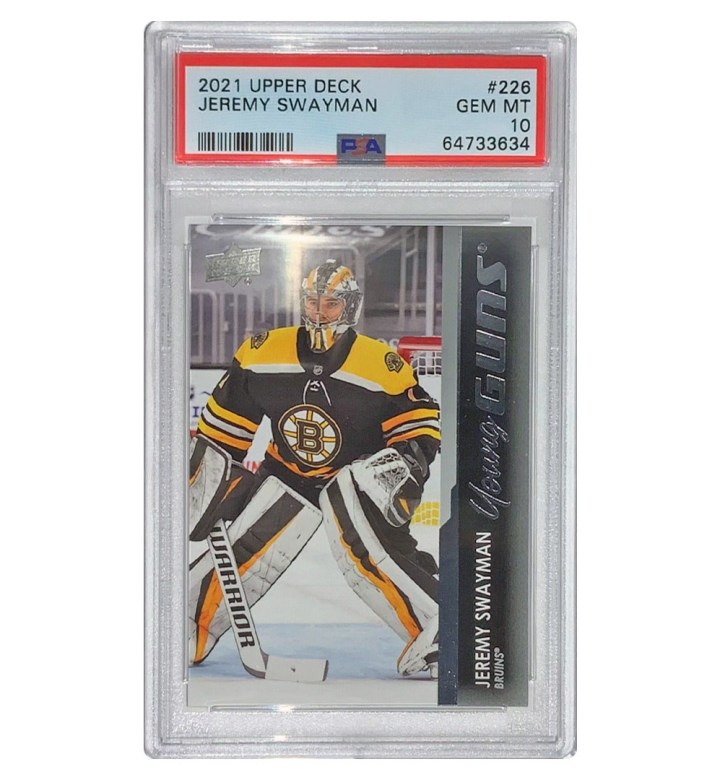 Jeremy Swayman’s path to the pros is drastically different from others on the list: he fell to the 4th round back in 2017 and is slightly older than the other Young Guns. However, he was able to perform at a high level this past season, despite falling under many team’s radars.  Swayman’s POP 37 YG has had many strong sales in recent weeks, and fans are excited to see how Boston’s newest goalie can develop further this fall.

Do you collect hockey cards? Which of the top NHL rookie cards are you collecting and who will have the best sophomore year? Let us know @CardTalkPod on Instagram and Twitter!