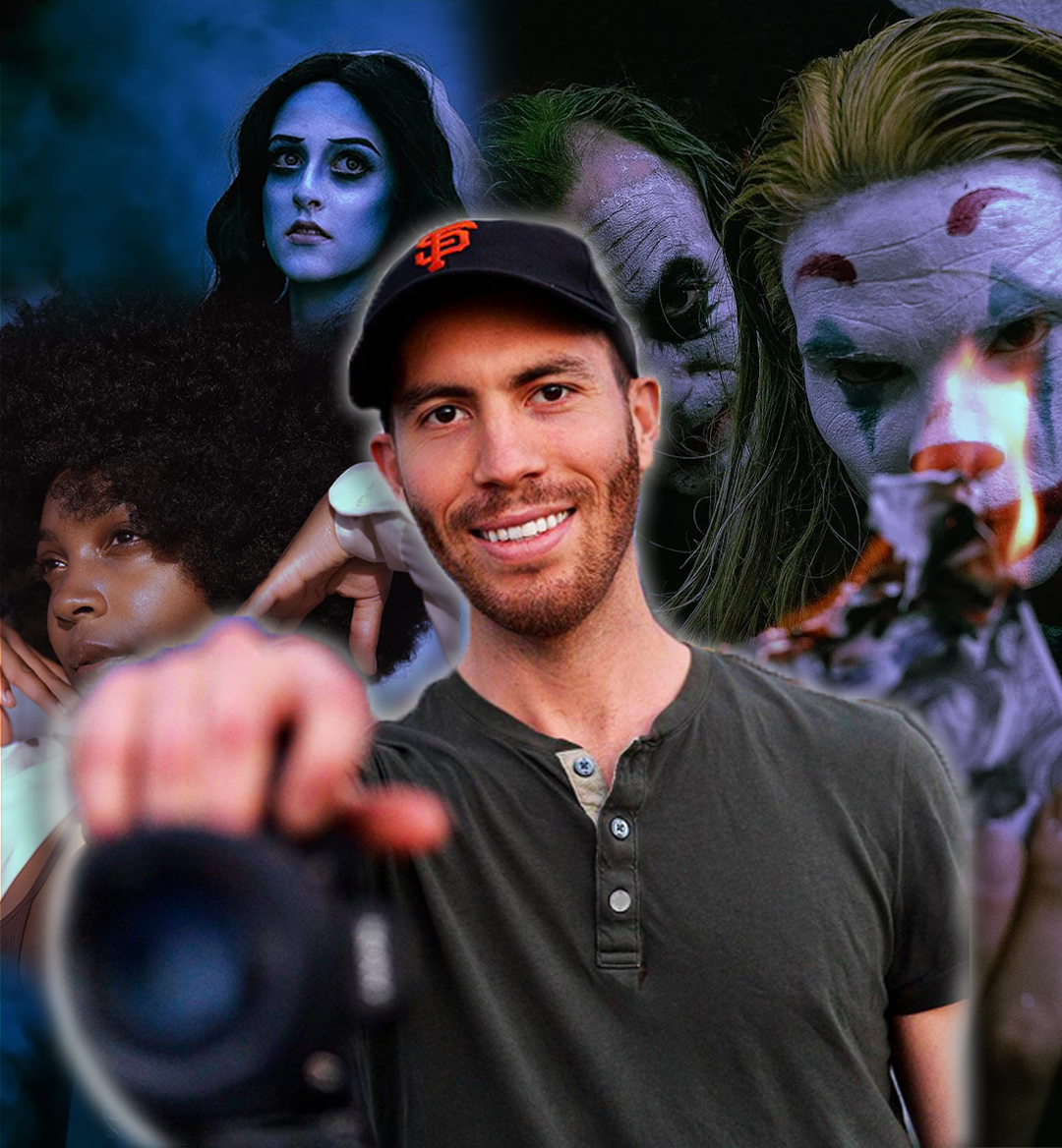 The world is abundant with opportunities, and if you are willing to listen, learn, and put in the work, then you can literally turn your dreams into reality.

I had the opportunity to sit down with Alex Stemplewski and talk about his transition from living at a desk, to becoming one of the greatest influencers on the web, here’s how it all started.

Alex Stemplewski is a short-form video content creator with over 23 million followers across all his social media accounts. He is known largely for his unique portrait photography, and for sharing his journey on TikTok, Instagram, and Youtube.

To be fair, Alex hasn’t always been a super-successful content creator, he had to first get a taste of what he thought he was destined to do, before realizing what he truly wanted to do in life.

Before Alex started creating his own content, he went to school to study statistics. He was always great at math, so after college, he got a job working as an insurance actuary. To be an insurance actuary requires an exponential amount of time dedicated to studying and passing exams that are often compared to the bar exams required to become a lawyer.

Oftentimes, Alex would spend over 400 hours studying for a single exam, just to make sure he didn’t have to retake it. You could say he spent the majority of his life studying for his exams and preparing for his career as an insurance actuary.

It didn’t take long for Alex to realize that sitting in an office staring at spreadsheets all day wasn’t what he truly wanted to do.

How Alex turned his passion into reality

It planted the seed that would then allow me to find this new life.

In 2018, Alex began listening to Gary Vee. In fact, Alex remembers the exact day that his life changed. “I’m walking to work, and I'm listening to Gary Vee on YouTube, in my headset, and I remember him saying something that planted the seed that would then allow me to find this new life,” he said. “You can turn your passion into your profession, you can make a living doing what you love, and the way to do that is through social media."

From that point on, Alex became an avid Gary Vee listener. Although he was still working his 9 to 5 job, his curiosity kept him seeking more knowledge from Gary.

He didn’t know if he’d ever use the information he was gaining from listening to him, but the thought of a new opportunity in life kept him coming back.

By 2019, Alex had been graciously brainwashed with wise, yet simple, words from Gary Vee.

On a complete whim, or perhaps it was a mixture of boredom and the desire for a creative outlet, Alex decided to buy a camera. Before that day, Alex knew absolutely nothing about photography, or even what camera to buy, so he asked one of his friends to help him choose the best setup.

After purchasing a Sony A7R 3 and a 50-millimeter portrait lens, Alex got to work.

He started by taking photos of random strangers on the streets of beautiful downtown San Francisco, with their consent of course. The very day he took his first photo was the same day he created his Instagram account and posted his results there, as well.

He continued to do this for more than six months, while at the same time reaching out to some of his favorite photographers to learn how to improve his skills.

Alex would pay these photographers simply to learn a thing or two about how he could improve over a quick Zoom call — a true indicator of his passion for photography.

With that, Alex quickly developed his skills even further, eventually hiring a mentor to help him decipher how he could turn his love of photography into his career.

In his early stages of photography, he would book photoshoots with models, however, oftentimes they would cancel, but he didn’t let that stop him from taking pictures.

Alex said that his routine was to head downtown if someone canceled on him, and would offer people on the street a photoshoot, which he would then send to them if they wished.

Throughout all of this, he continued listening to Gary Vee and put his advice to use. Then, one day in October 2019, Gary started talking about TikTok religiously. It was at that point Alex knew he had to get on TikTok!

He posted his first TikTok video in November, which was simply photos that he took with some background music. But, his third video is when he decided to try something different.

He decided to continue doing what he had already been doing — taking photos of strangers — but this time he had his friend Derreck record him asking people, and then sharing his results. This led one of Alex’s TikToks to gain 10,000 views! Now, that might not seem like much compared to the views he currently receives, but to him, that was a sign that he was onto something.

@derrek.harris We asked a stranger to model for us then she recognized us from Instagram! #streetphotography #challenge #she #recognized #us #4u @alex.stemp ♬ Free - Louis The Child & Drew Love

When things really changed was when Alex filmed Derreck walking up to a stranger doing the same thing. Derreck then posted it to his TikTok and got over 1 million views, and he went from practically zero followers to over 10,000 followers instantly!

This is the day that has officially changed my life forever!

Even though it was his friend’s video, Alex knew that if he stayed persistent, he would attain the same results. Sure enough, a few posts later, Alex got his first million views on TikTok! Within their first month on TikTok, they both had over 1 million followers!

The level of attention Alex was receiving led him to be skeptical about his followers being real. Getting that amount of followers, that fast just didn’t make sense to him.

I still kinda don’t believe it in a way, because it’s so crazy!

Both of them continued to share their journey using TikTok, and after three months, Alex had racked up over 3 million followers! That was when he decided to quit his job as an insurance actuary to focus on creating short-form video content.

Alex said, "The content world sort of shifted after TikTok blew up, now we see every platform shifting towards short-form video format. The short-form video content is taking over on all the platforms, not just TikTok.”

As soon as Instagram reels came out, he quickly gained over 300 thousand followers in his first month. Then, the same thing happened when YouTube shorts came out, gaining over 1 million subscribers in just 50 days!

This explosive growth that Alex has experienced across multiple platforms is due to his passion, but also because he put to use what he learned from Gary.

Of course, Alex continues to listen to Gary, and always strives to execute what he learns from him. Hence why Alex is now exploring many avenues in the NFT and Web3 space.

Future plans for Alex and NFTs

Alex didn’t know what an NFT was until Gary mentioned them back in February 2021, and again, he took Gary’s advice and bought his own VeeFriends NFT. From there, he continued down the rabbit hole and began creating his own NFT content and expanding into more verticals than just photography.

Alex didn’t know what an NFT was until Gary mentioned them back in February 2021, and again, he took Gary’s advice and bought his own VeeFriends NFT. From there, he continued down the rabbit hole and began creating his own NFT content and expanding into more verticals than just photography.

Would you rather... 🚗 or 👽 pic.twitter.com/xOKAAw7UJR

He actively runs an account called NFT News on Instagram and plans to create his own one-of-one NFTs in the next month or so.

His NFTs will be minted on SuperRare, which will include some of Alex’s best photos, but his main focus is putting a strong emphasis on providing real-world value to his NFT holders.

The way he plans to structure his one-of-one NFTs is to offer holders their own promotional package. What that means is he will promote, and help his holders grow their brand by utilizing his 23 million followers across TikTok, Instagram, and YouTube. This includes your own viral video, for whatever it is that you want to promote.

Additionally, Alex is going to give his personal number to his NFT holders to help guide them through the world of social media.

Alex's story is nothing short of incredible, it just goes to show that if you are willing to learn from others, taste different things, and be persistent with the things you want to do in life, you can achieve great things too!

It won't always be easy, nor will it always make sense, but at the end of the day, the journey is what makes it all taste so sweet.