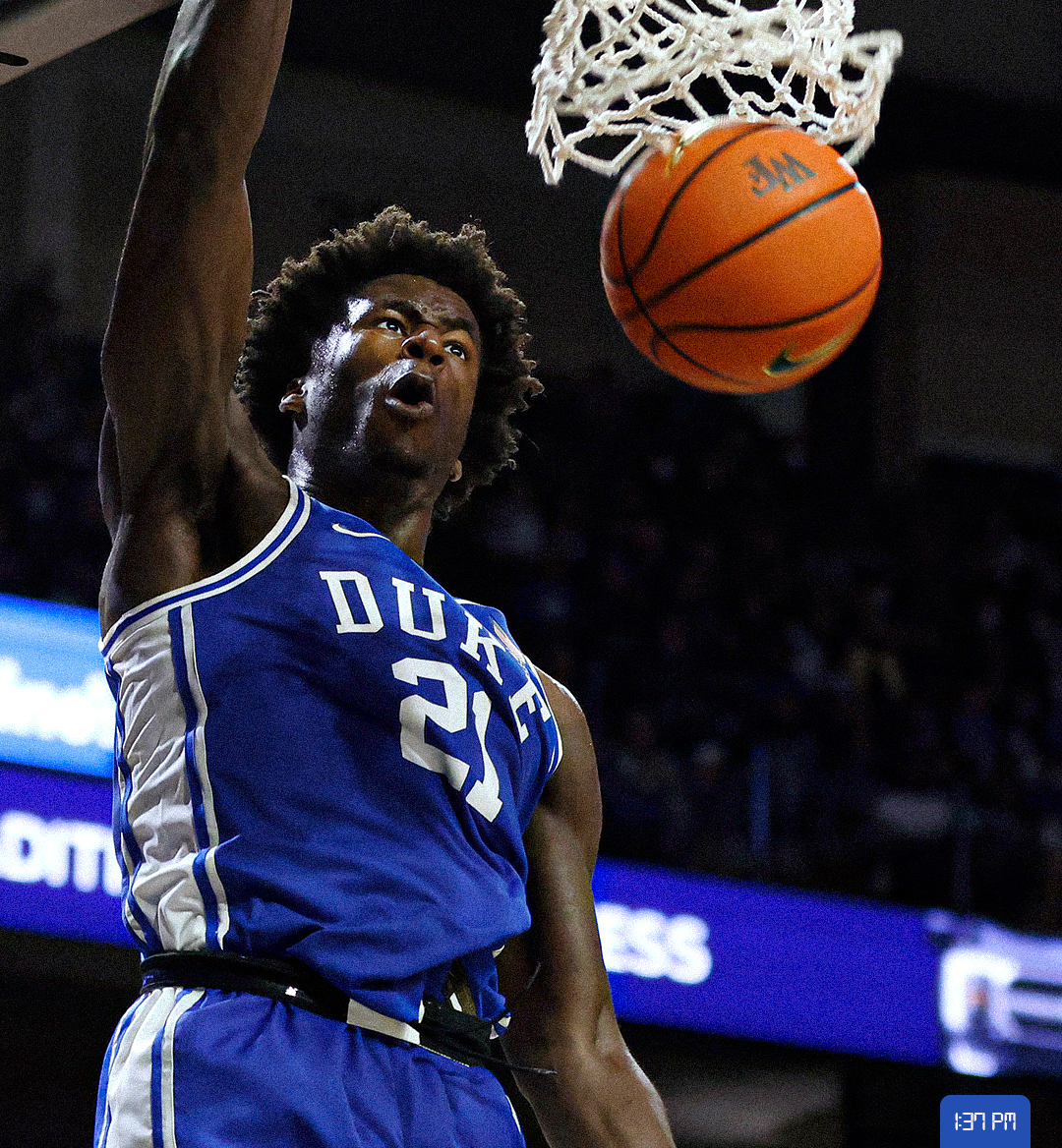 Last year’s NBA Draft presented the privilege of easy choices. Cade Cunningham, Evan Mobley, Jalen Green, Scottie Barnes, Jalen Suggs, Josh Giddey: all undeniable stars, to varying extents. Comparatively, the 2022 edition is considerably thornier, lacking last year’s crop disaster-proof options. Even the consensus best prospects—Paolo Banchero, Jabari Smith Jr., Chet Holmgren—seem like they’ll require some amount of imagination and environmental cosseting to reach their potential. Banchero is a muscular 6’9 fantasia of stutter-rips and pull-up jumpers, but sees the court in fuzzy standard definition; Holmgren is an anemic defensive genius who needs to be protected by a brawnier center; Smith offers an intriguing array of skills (namely, being tall and making every jumper), albeit one that necessitate some creative assembly. But amidst all this uncertainty, AJ Griffin offers a welcomed dash of clarity.

A five-star recruit entering this season, the 6’6 Griffin has been eased into Duke’s rotation after spraining his knee during the pre-season; his modest per-game averages (7.9 points, 3.0 rebounds, 1.0 assists) are the result of limited playing time. At first glance, Griffin is a fairly familiar archetype: an athletic, low-usage wing who subsists on a menu of dunks and spot-up shots. What separates Griffin from the Stanley Johnsons and Josh Jacksons of the world, though, is that Griffin can actually do stuff besides having arms the size of legs and legs the size of caissons.

Namely, if he’s not the best shooter in this year’s draft, he’s at least the best shot-maker in it. His 7.9 points per game belie his true scoring talent—his 25.7 points per 100 possessions are third-most on the team. He dribbles with the shambling wiggle of a marionette, flowing from move to counter-move to counter-counter move until he can create enough space for a stepback jumper; he bumps defenders off their spot and fires shots over their late contests. Although Griffin has a more sluggish first step than most elite guard prospects, he compensates for it by being the Strongest Teenager Alive; upper-classmen careen off of the 18-year-old Griffin. Through his first 16 games at Duke, Griffin is shooting 78.3 percent at the rim, 44.4 percent from mid-range (on an entirely unassisted batch of shots, by the way) and 44.4 percent from three. Aside from his low usage rate, there’s a very real argument that he's having the most efficient volume-scoring freshman wing in recent memory.

Defensively, Griffin’s primary goal is to cause mayhem. Despite not being fast enough to bottle up ball-handlers on his own, Griffin is an omnivorous off-ball presence. More, he can credibly switch onto nearly any player for short stretches because he can swallow small guards with his seven-foot wingspan and stymie post players because he’s brolic beyond comprehension. In high school, Griffin padded out his highlight reels with detonating weak lay-ups and presumably he will continue to do so at Duke once he fully shakes off two years of accumulated rust (Griffin missed most of his junior season in high school because of a knee injury and then Covid and then opted out of his senior year).

And yet, Griffin somehow still languishes towards the back-end of the lottery, according to most draft-niks. Mock drafts at Bleacher Report and The Athletic predict he’ll be the tenth pick; ESPN’s big board lists him as the 11th best player. This is madness. Even independent of the fact that AJ Griffin is a fun player who does fun things, he’s an expert shot-creator-cum-body builder who moonlights as a fearsome backline help-defender—and is also one of the youngest players in the draft.

Moreover, Griffin’s NBA translation seems like it’ll be fairly painless. He’s the kind of powerful, two-way wing—think: RJ Barrett with a handle or Jimmy Butler with a Valium prescription—that every team pines for. Projecting the development of a bunch of teenagers you’ve never met is a fool’s errand, but AJ Griffin’s obvious and overwhelming goodness is a reminder that it doesn’t always have to be so hard.