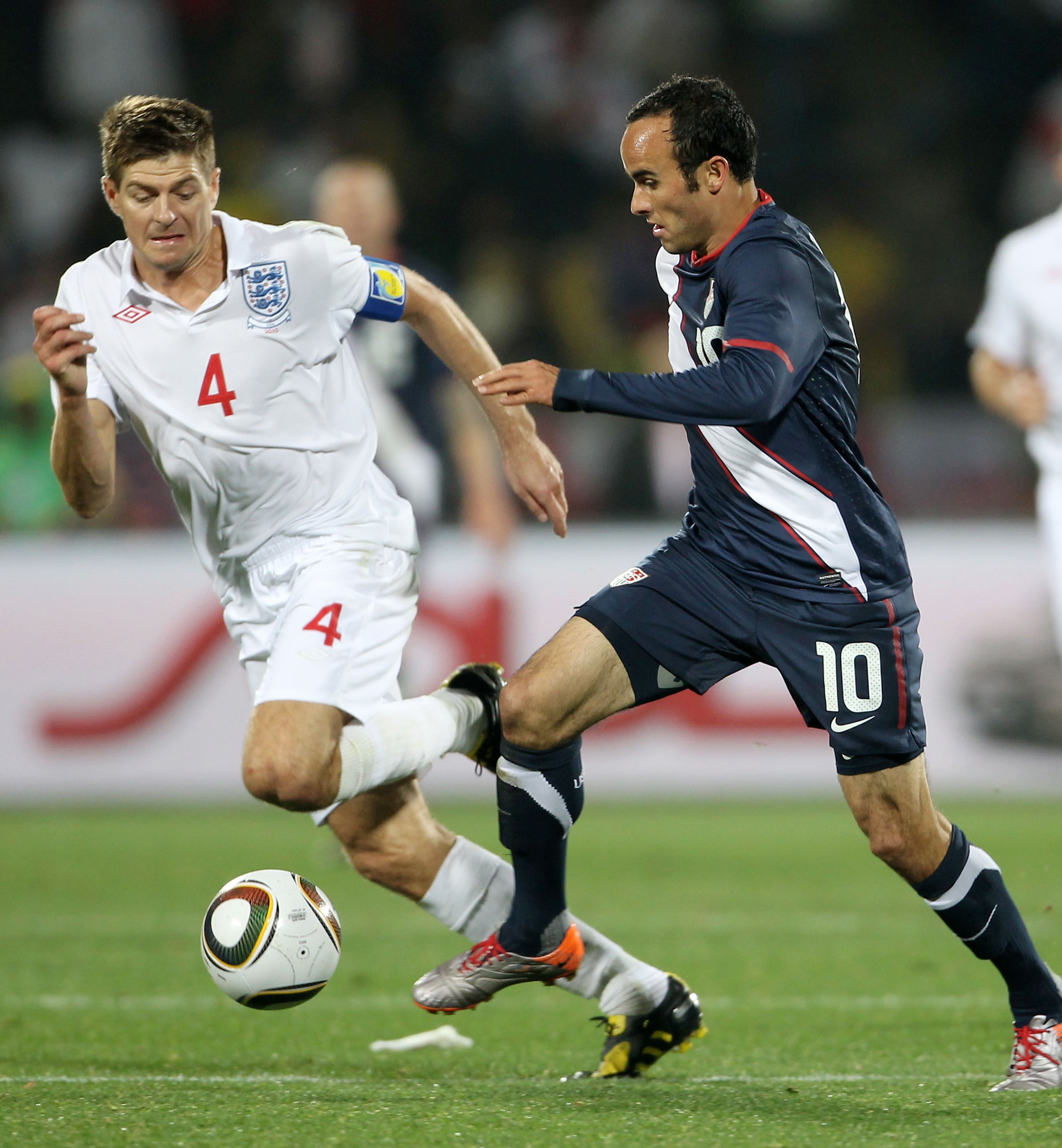 American soccer has featured some absolute greats, both past and present, on the men’s side of the game.

Landon Donovan and Clint Dempsey are almost always the first two that come to mind when discussing U.S. Men’s National Team legends, but we’re in the midst of a new generation led by Christian Pulisic, Weston McKennie and others that will surely find their way onto this list some day.

With the evolution of Major League Soccer over the years and the willingness of players to move abroad to challenge themselves in the best leagues around the world, it certainly comes after significant work put in those before them.

Without further ado, let’s take a look at the 25 best American men soccer players of all-time. 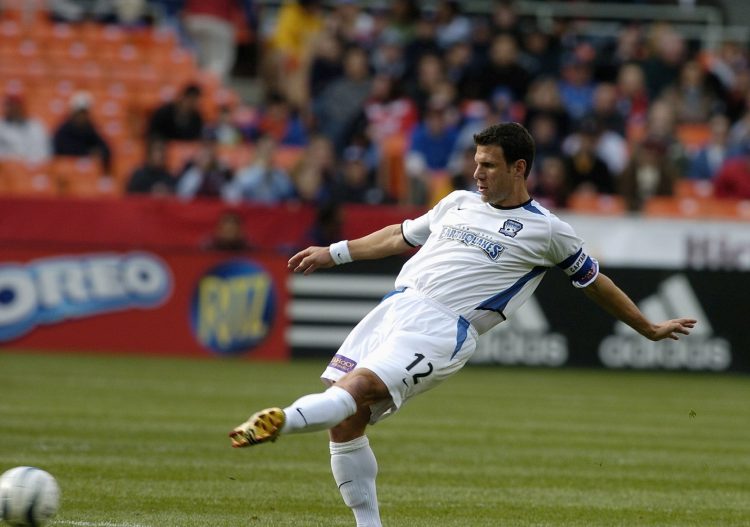 Agoos made 134 appearances for the USMNT after a rich MLS career, most of which he spent with D.C. United and the San Jose Earthquakes.

Agoos was a key member of the American back line that won the 2002 Gold Cup and also played a huge role in winning five MLS Cups during his career. 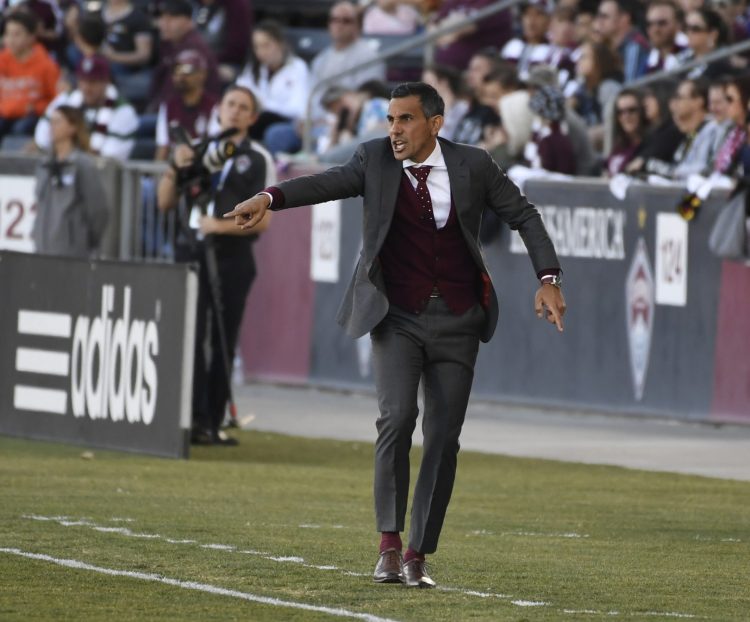 Mastroeni was best known for playing with the Colorado Rapids for over a decade before managing the club. Mastroeni’s play at the national team level was quite impressive though after winning three Gold Cups with the USMNT. 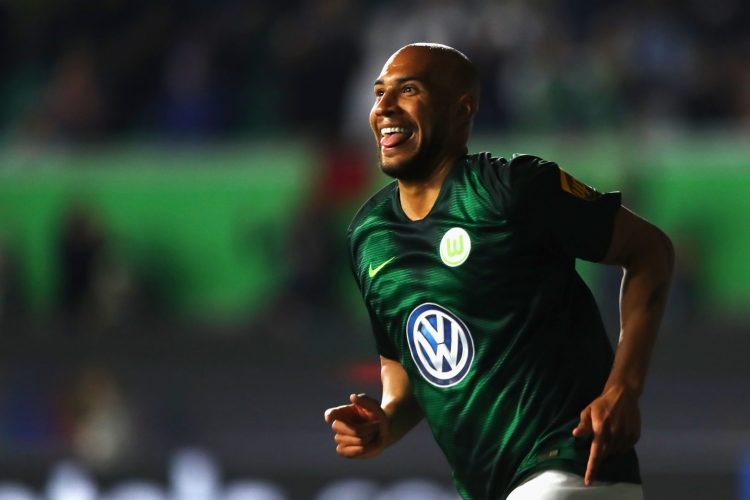 The German-American has been a revelation for the USMNT defensively since making his debut under Jurgen Klinsmann. His time in the Bundesliga has been massive for his development.

Brooks’ goal at the 2014 World Cup against Ghana really welcomed him onto the international scene. 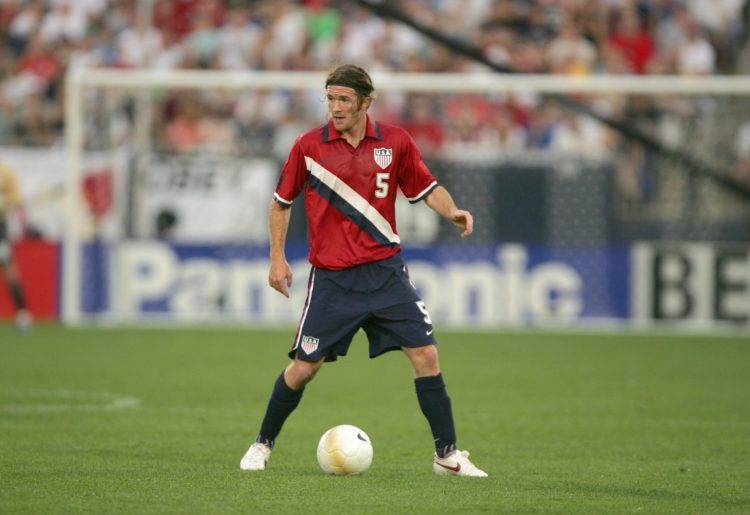 O’Brien spent most of his career in Europe with Ajax, Utretcht and ADO Den Haag and despite not playing as many matches as most of the others on this list excelled greatly at outside back and midfield.

O’Brien was crucial in the midfield at the 2002 World Cup when he started every match for the U.S. en route to their quarter finals appearance. 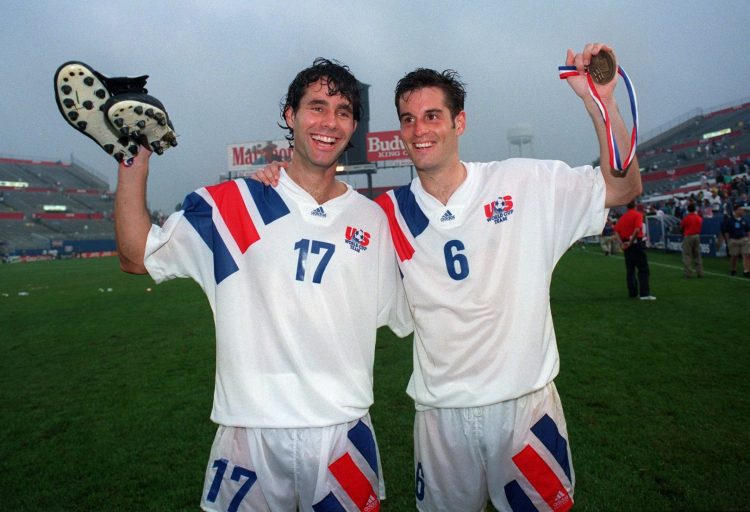 The Greenville Triumph manager was the first USMNT player to appear in the Premier League with Sheffield Wednesday.

His time in England hurled Harkes onto the U.S. Soccer scene from an early age before moving back to the U.S. in the late 1990s and finishing his career in MLS. 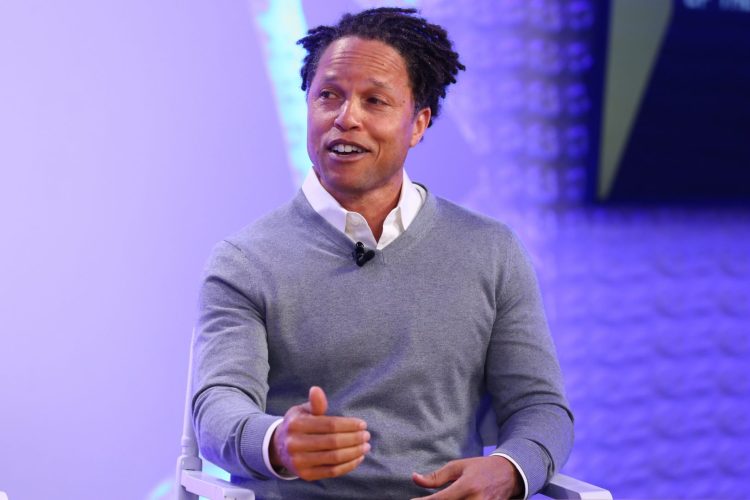 Jones has transitioned into commentating since retiring and after serving as a coach with Galaxy for a number of years. 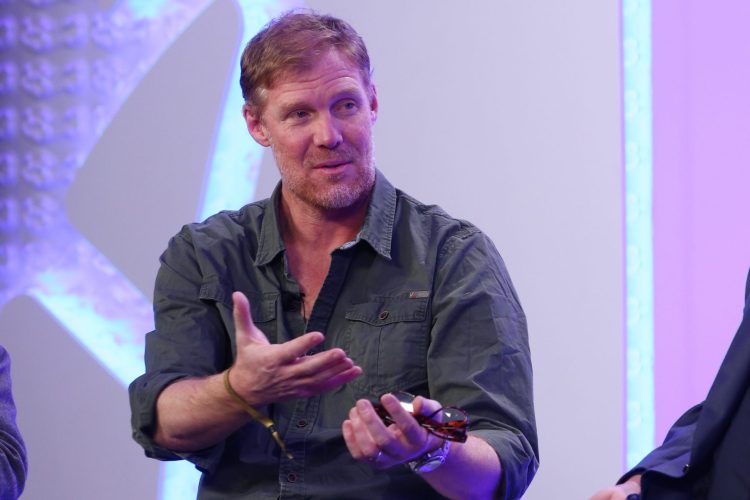 The well-known television pundit got his start on the pitch for the Americans in the 1990s and quickly became a face of American soccer with his curly red hair and ability to win any header on the field.

Lalas made 96 appearances for the USMNT over eight years and was one of the first Americans to influence an Italian side during his time at Padova. 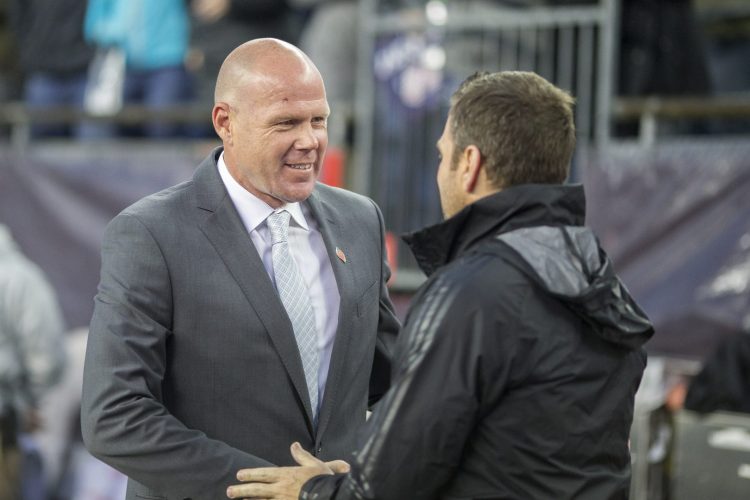 The long-time goalkeeper falls in a long line of shot stoppers and one that spent a long portion of his career besting opponents in the Premier League.

Friedel played 84 games for the USMNT over his 13 years at the national level and represented the U.S. at three separate World Cups. 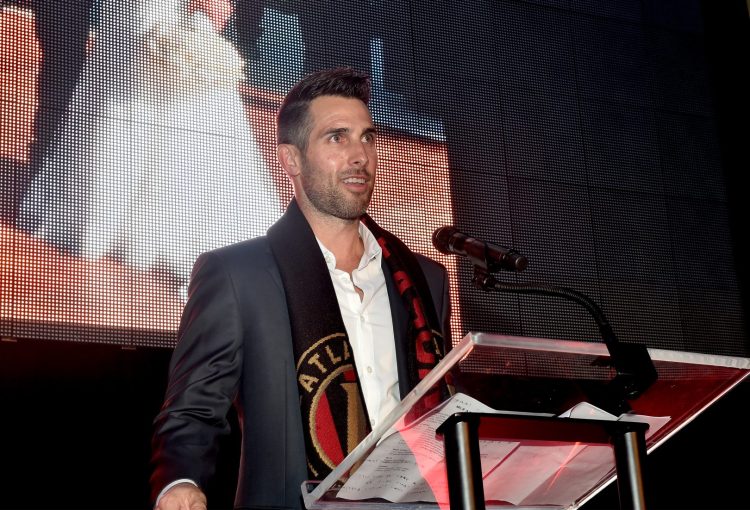 Bocanegra’s now at Atlanta United in their front office, but for many years he was a steadying force defensively for the Americans.

He served as captain for several years with the USMNT and was a key force for the Americans at right back and central back. Bocanegra captained the U.S. team that beat Spain at the 2009 Confederations Cup. 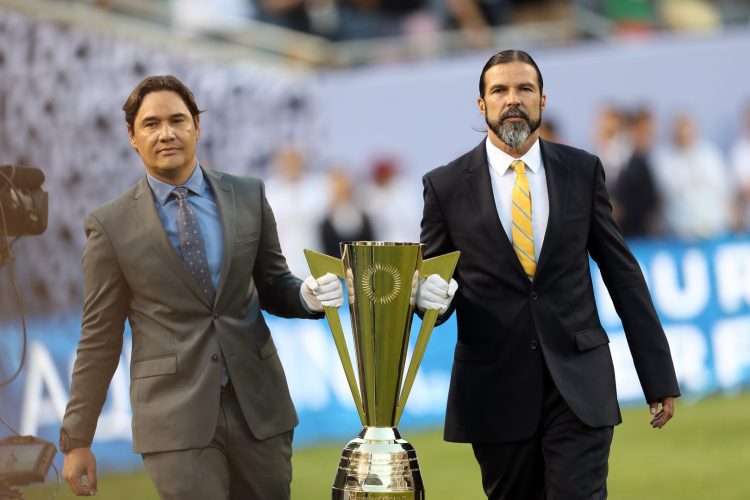 Balboa was U.S. Soccer Athlete of the Year on three separate occasions and played in three World Cups for the USMNT, making him one of the first players to do so at the time. 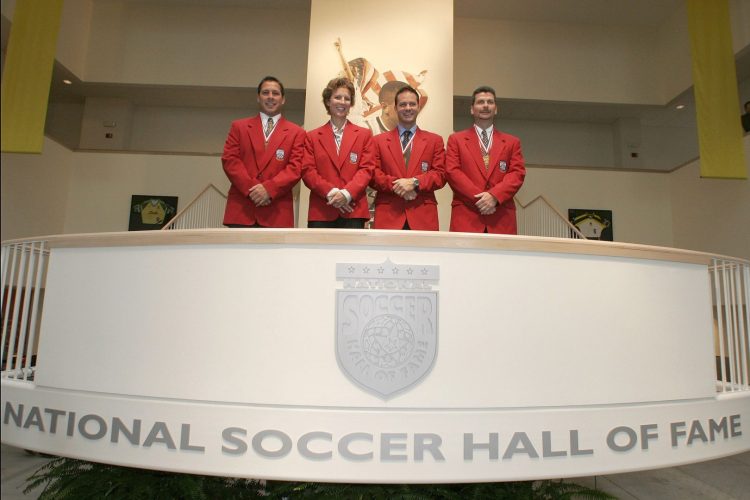 Caligiuri was one of the original Americans to break onto the scene when U.S. Soccer kicked up its efforts in the 1980s and he appeared in over 100 matches at the international level for the USMNT.

His ‘Shot Heard ‘Round The World’ scored against Trinidad and Tobago in 1989 helped the Americans reach the World Cup the following year. 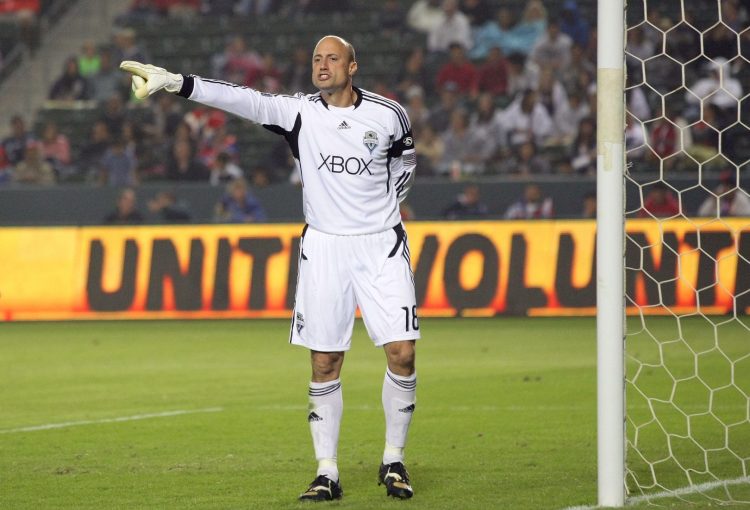 Keller is the only four-time World Cup participant on this list, proving how elite he was in net for the Americans during the course of his decorated career. He was also the first American to feature in the Bundesliga, Premier League and La Liga. 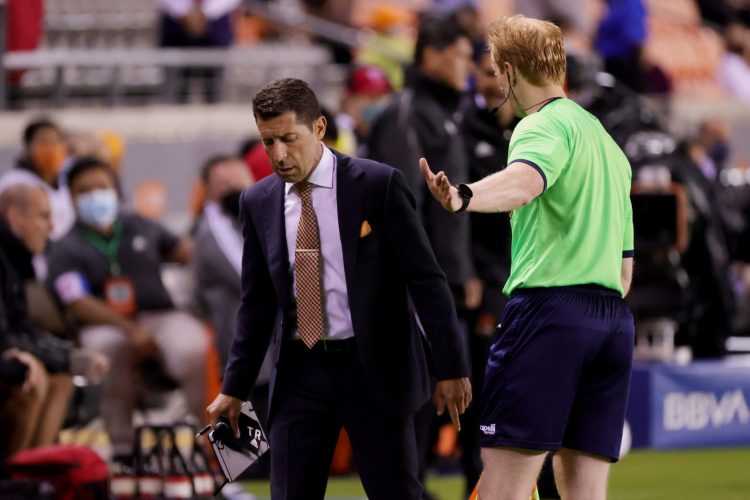 The Uruguayan-American is currently the manager of the Houston Dynamo in MLS, but for years Ramos was a well-known player during his time in La Liga.

On top of Ramos’ brilliant play with the USMNT he also made appearances with the U.S. Futsal national team. 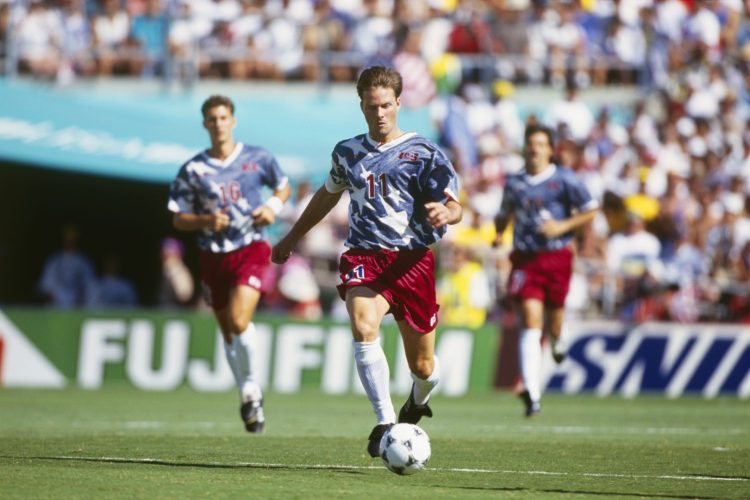 Wynalda’s 34 goals for the USMNT leaves him fourth all-time for the Americans and he’s certainly in the conversation for one of the best strikers in the country’s history.

During his time with the U.S. he appeared in three World Cups, including the 1994 edition which was held on American soil and saw the U.S. reach the knockout phase. 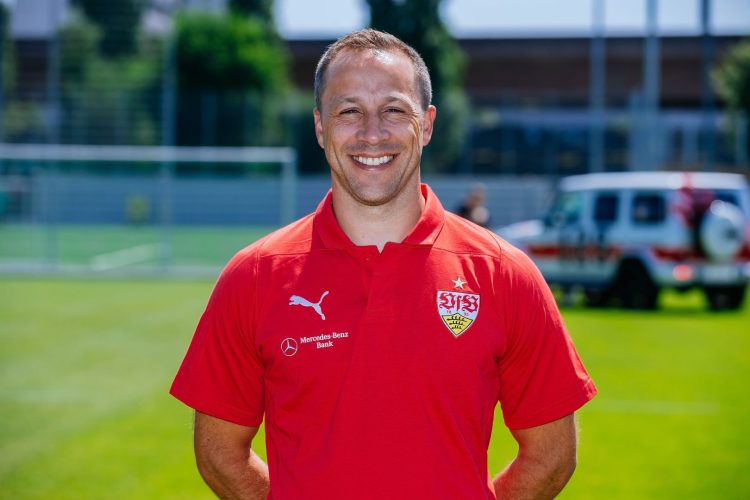 The new Las Vegas Lights manager built up a massive reputation for himself in Germany during his time at Hannover 96, but his play at right back for the USMNT truly made him one of the greats on the defensive side of the ball.

His ability to track up and down the wing and serve as a true two-way player was incredibly valuable for the Americans over the decade-plus he spent with the national team. 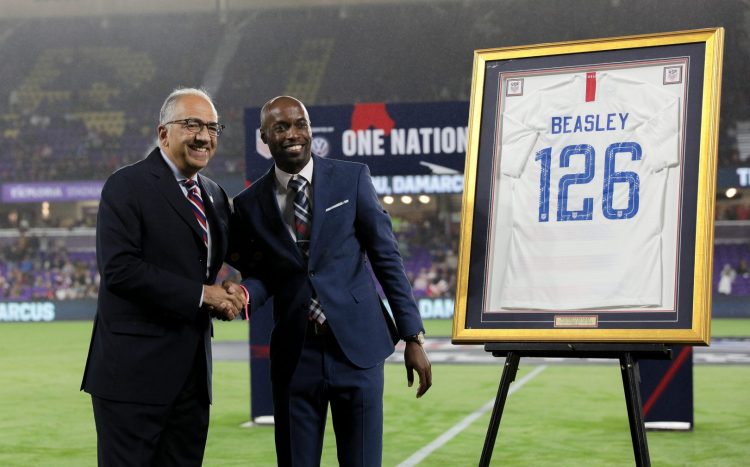 The outside back simply did it all during his career, and it honestly felt like Beasley was going to play forever because of how insanely well he took care of himself and shared his love for the game.

Beasley played over 550 matches for club and country and he ranks seventh all-time in USMNT appearances. The American is extremely decorated when it comes to his time with the U.S. considering how long he was available to play for. 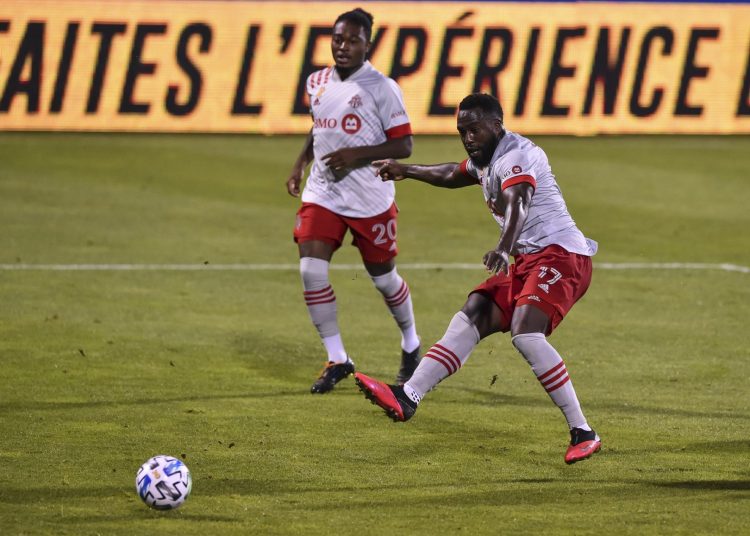 The Toronto FC striker is sometimes overlooked because of several bouts with injuries at inopportune times, but Altidore is the best pure striker the Americans have ever had.

It’s easily to argue that he would’ve been a more valued asset than guys like Wynalda and McBride had he not sustained some of his muscle injuries, but nonetheless, Altidore should be celebrated for making the jump to Europe at a young age and excelling greatly in MLS. 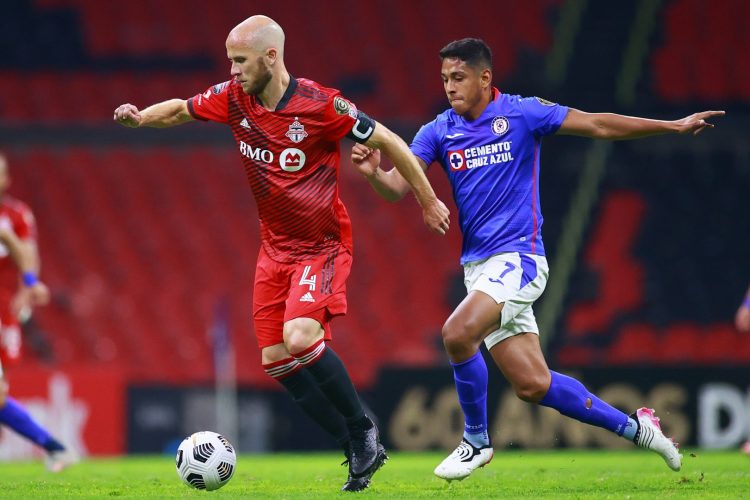 Altidore and Bradley have been teammates for a long time, and it’s no mistake that they’ve both had incredible careers.

The midfielder general seemingly has always had an engine that lasts for days and he’s come up with some huge performances throughout his career, including the U.S.’ 2010 World Cup run. 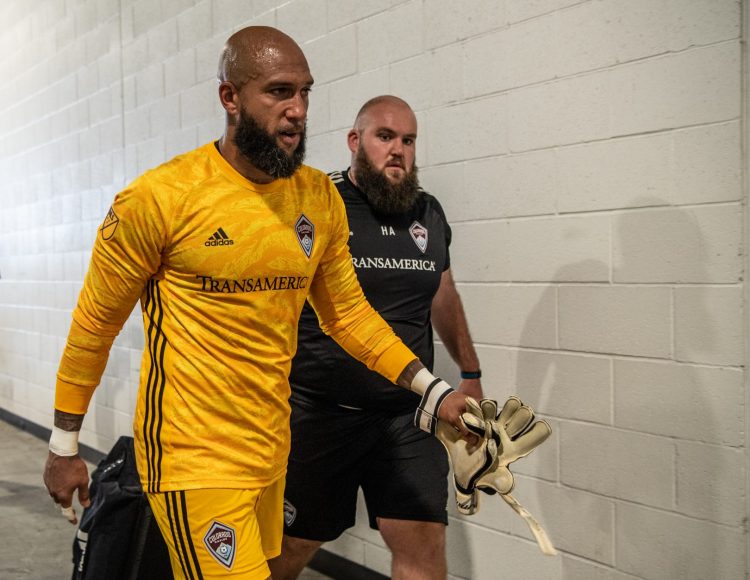 The player-turned-commentator is certainly the trendsetter for American goalkeepers after his transcendent move to Manchester United from the New York/New Jersey MetroStars.

Howard’s USMNT and club career in Europe was astonishing, and he’s easily the most decorated American player to compete in the big five leagues regardless of position. 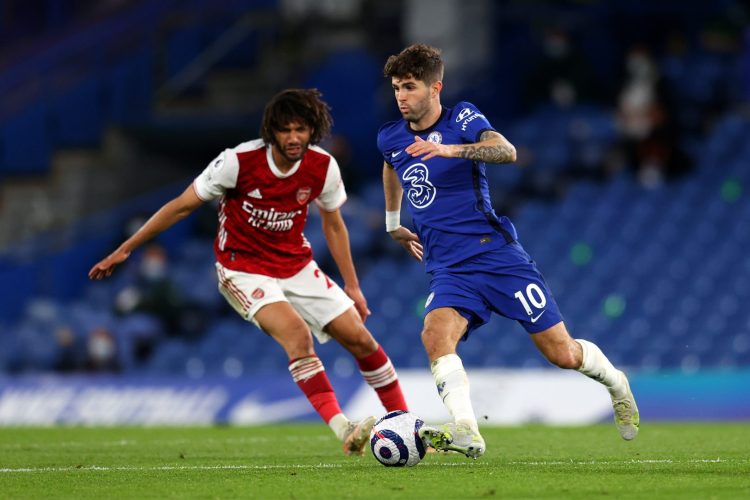 Pulisic is by far the youngest on this list and only truly beginning his career with the U.S., but his skill is almost unmatched when it comes to players before him.

The Pennsylvania-born attacker has already been a regular starter at both Dortmund and Chelsea in two of the world’s biggest leagues and he’s destined for more greatness at the international level as the USMNT aims to qualify for the 2022 and future World Cups. 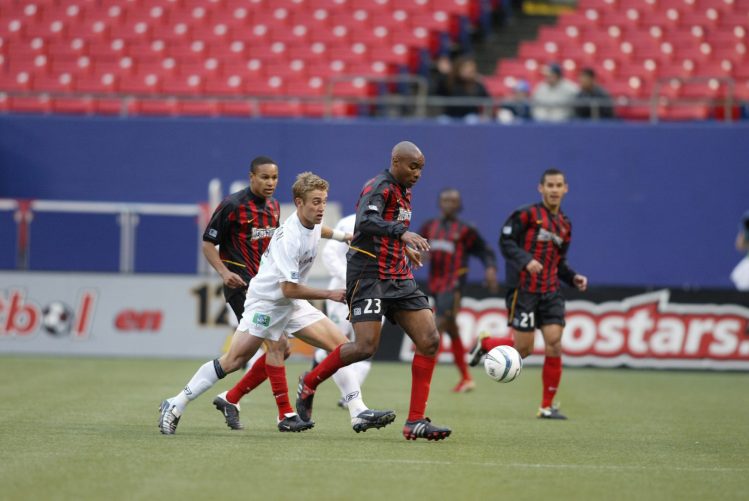 Although defenders don’t get a ton of love, Pope was one of the best that’s ever suited up for the Americans and he excelled during his time in MLS and with the USMNT.

Pope was named to the MLS Best XI four times throughout his career, including in 2003 after he had shown out brilliantly for the USMNT at the previous year’s World Cup. 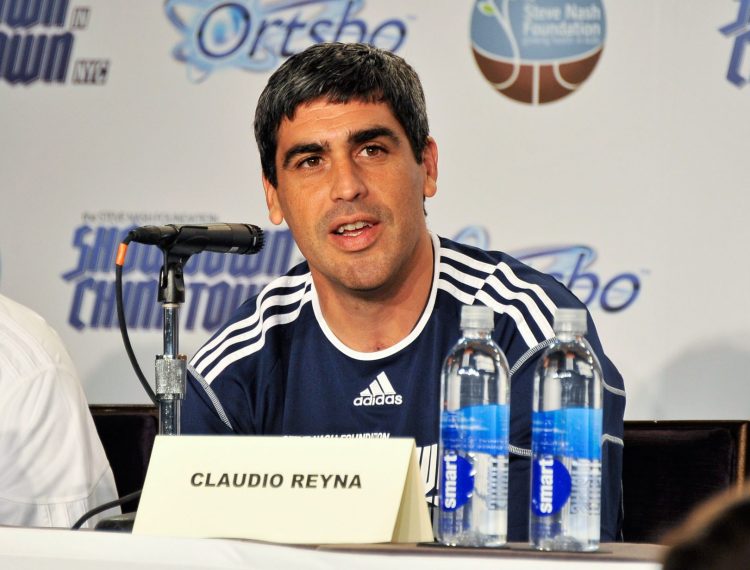 Current fans of MLS will know Reyna for his time in the front office with New York City FC and now Austin FC, but the New Jersey native remains one of the top midfielders the USMNT has ever featured.

Reyna was named to the 2002 World Cup All-Star Team and featured in three World Cups along with several other players on this list. 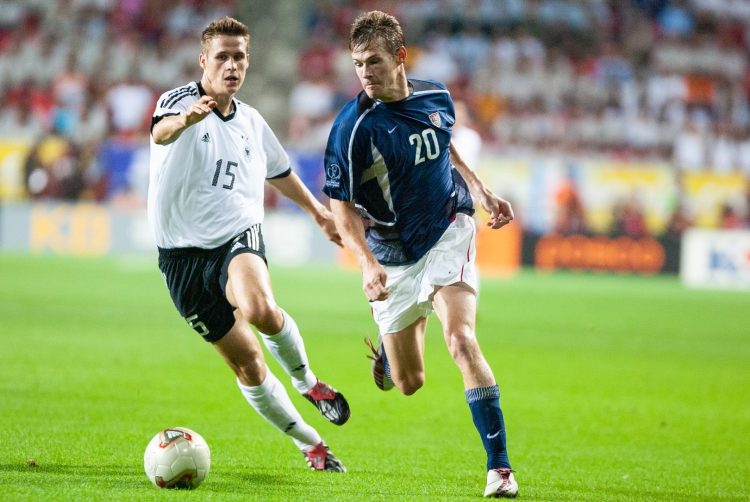 Europe after having years of success with the Columbus Crew in MLS.

The striker played a role in three World Cups, including the USMNT’s 2002 run to the quarter finals where the Americans narrowly fell to Germany. McBride finished his international career with 30 goals, which ranked fifth all-time for the Yanks. 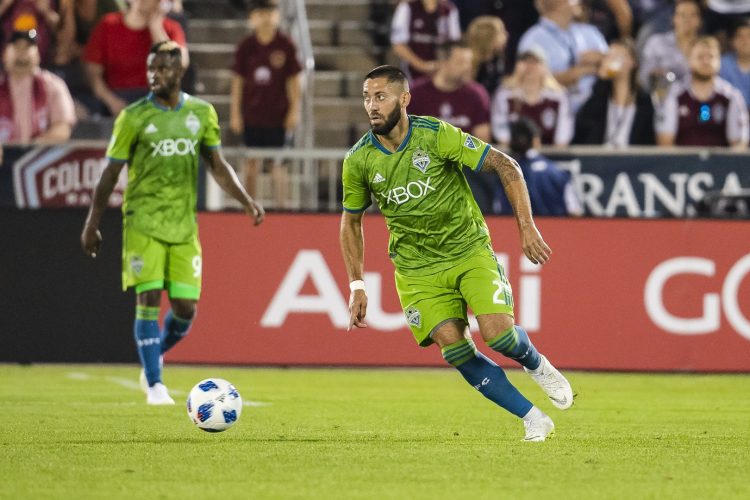 The man affectionately known as ‘Deuce’ was an assassin in front of goal and actually topped McBride’s goal total in England with Fulham. His iconic goal against Juventus is one of the most memorable sequences of his professional career, but Dempsey really made a lasting impression with the USMNT.

He finished tied for first all-time in goals with Landon Donovan and helped lead the U.S. to three Gold Cup wins and was a member of the USMNT’s historic win over Spain at the 2009 FIFA Confederations Cup. 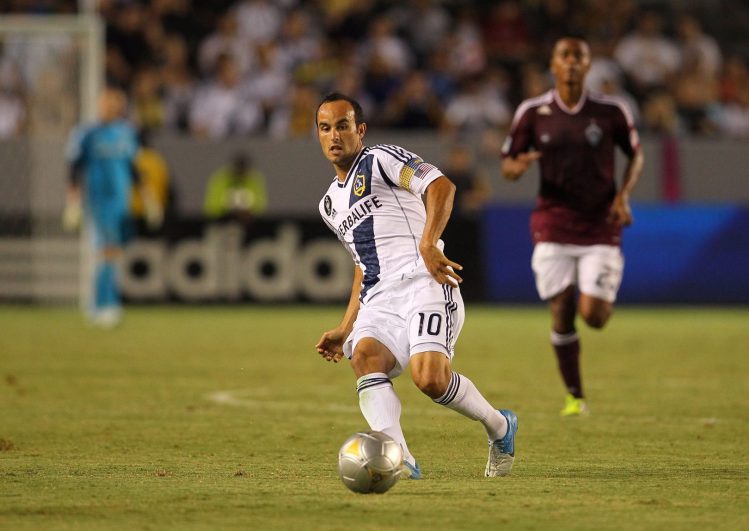 Whenever bringing up Donovan it’s almost reactionary to think of 2010 in South Africa when his heroics helped guide the USMNT through to the knockout phase. His career was full of these moments, both with the USMNT and at the club level.

Donovan finished his national team career with 57 goals and 58 assists, which rank first in both categories. Only 39 years old now, the U.S. legend finds himself in ownership with local California side San Diego Loyal.