Boye Mafe Is the NFL Draft's Most Athletic EDGE 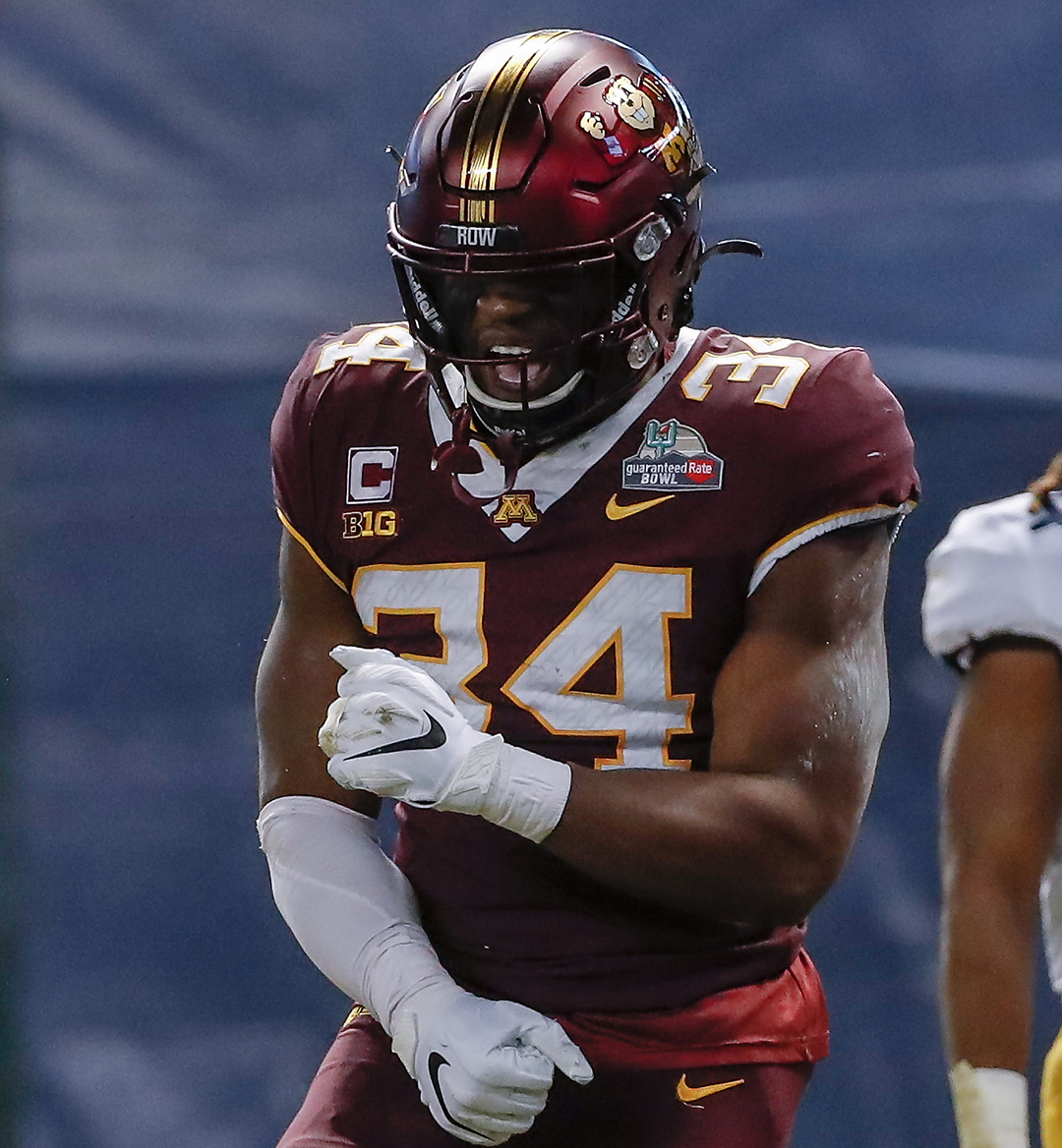 Every player in the NFL Draft is an elite athlete; that’s why they’re in the NFL Draft. Still, even within this ultra-selective subset, there are levels to this shit. At one end, are the heaviest offensive linemen and the pokiest quarterbacks who make up the Draft’s least explosive players. Then, at the other, is Boye Mafe.

An edge rusher from the University of Minnesota, Mafe is among the most physically impressive players in this—or any—draft class. Even amongst a deep, talented corps of defensive linemen, Mafe is nearly peerless. Although at 6’5, 261-pounds, he’s not quite as heavy as other linemen, he moves with disturbing speed. He’s faster (4.53 second 40 yard dash) than star wide receivers like Keenan Allen (4.71) and Cooper Kupp (4.62); he can jump higher (38 inch vertical) than Pro Bowl running backs Dalvin Cook (30.5 inches) and Le'Veon Bell (31.5 inches); he can bench press more (21 reps) than linebackers like Shaq Barrett (16 reps) or Darius Leonard (17 reps). In other words, there are a wide variety of basic physical tasks that a football player needs to perform and Mafe does them all better than just about anybody alive.

At Minnesota, Odafe was certainly productive (he had seven sacks last fall), but not overwhelmingly so. Instead, Mafe’s NFL potential stems not from who he is now, but who he could easily become. Just as raw prospects like Jaelan Phillips and Odafe Oweh emerged as two of the best pass-rushers in last year’s class, Mafe could become a fearsome player once he adds some polish to his promise. Slated to go in the back half of the first round, Mafe is the draft’s most enticing project.

Last week, Mafe sat down with ONE37pm to talk about his pre-draft preparations, fishing and spending a year in boarding school in Lagos.

ONE37pm: How has the pre-draft process been?

Boye Mafe: I've learned a lot about myself. The coaches have watched my film and they have given me feedback about my game. I’ve just been taking all the notes they’ve given me about balancing my moves and finishing setting the edge faster and things like that because this is what they do for a living [laughs].

Boye Mafe: It was very eye opening. I was definitely nervous about it—all my siblings did it too, but there’s not really much you can do to prepare yourself for the experience of being 13 years-old and dropped off in a new country. But I don’t regret it any way, shape or form. It was fun. And honestly, I learned a lot by myself. I learned a lot throughout the process.I matured a lot at early age—I had to figure out time management and how to do things on my own. I felt that if I wanted to get the most out of it, I had to put my best foot forward.

ONE37pm: How is school in Lagos different from school in Minnesota?

Boye Mafe: In America, I feel like we’ll give students a helping hand to guide them. But there, you really have to have the desire to learn. It’s much more of a college style. They’ll teach you, you’ll take your notes, but then it’s up to you what you’ll do beyond that. That year in boarding school  really pushed me to really strive and teach myself how to learn.

ONE37pm: Is it true that you used to bang holes in the wall of your house with your head?

Boye Mafe: I was a little rough kid. You know, I liked roughhousing and playing like that. Yeah, it was a little different, I used to bounce off the walls and stuff. Me and my siblings were all big WWE fans, so on Friday nights we set up our own version of it in the backyard.  I was always the youngest one, so to hang out with the older kids, you have to be a little bit more durable. They're stronger than you so if you want to hang out with the big boys, you better be able to hang with the big boys too.

ONE37pm: What are your interests outside of football?

Boye Mafe: I love the outdoors—fishing, boating, you name it. When I have the time and there’s a good fishing spot nearby, I’ll be there, it doesn’t matter when or where. If somebody wants to go fishing, count me in and I’ll be ready to go whenever.