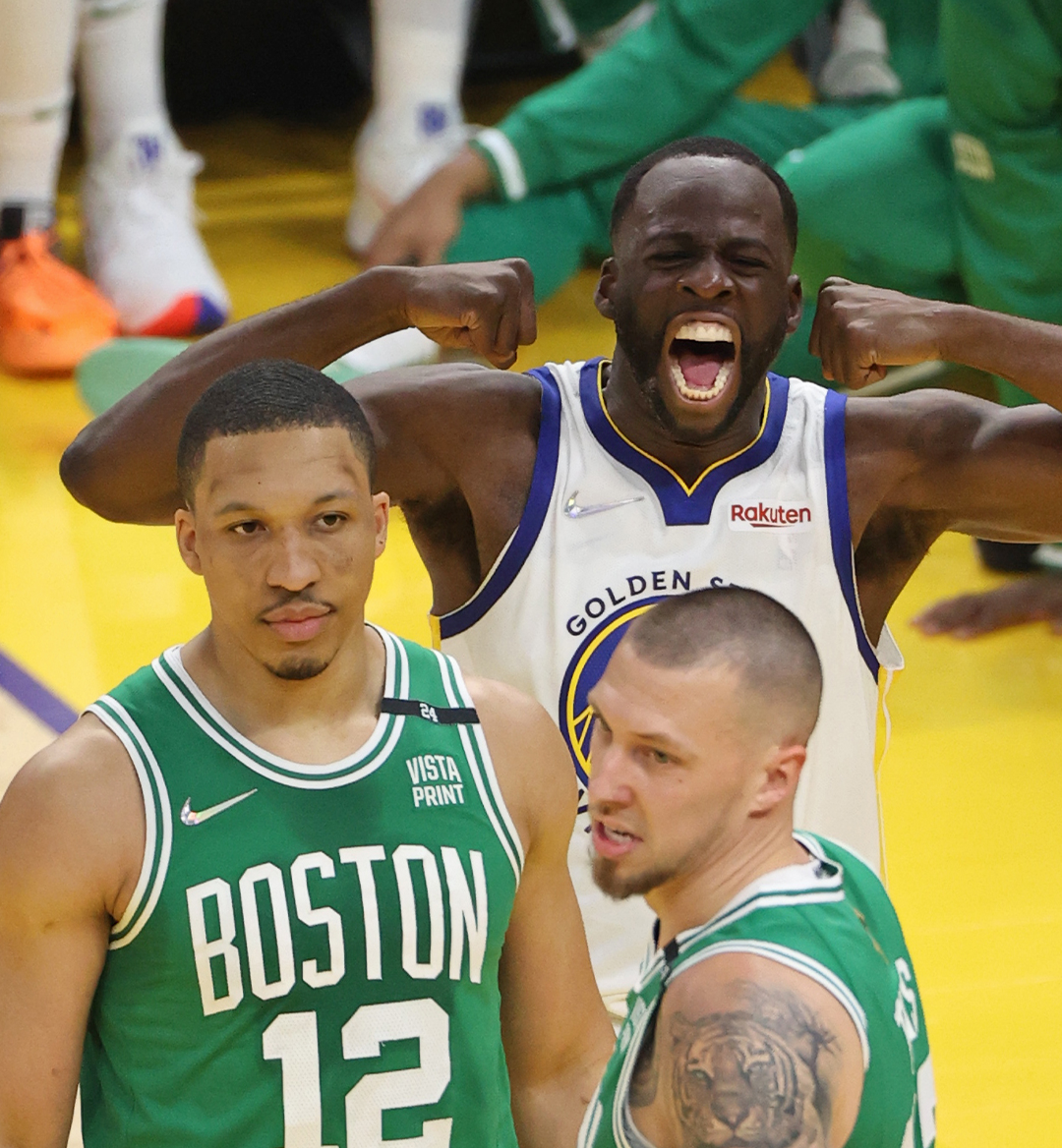 When Draymond Green gets a tech, he’s not going to get a second. No ref—not Tony Brothers or Zach Zarba or even Scott Foster—is going to do shit about it; the juice of tossing Green isn’t worth getting squeezed by a Chase Center full of wannabe LinkedIn influencers.  Whereas other players would tread lightly, Green is going to howl and inveigh and be a jerk with impunity, safe in the knowledge that he’s absolutely above the law. He’s Logan Roy, commandeering a shareholders’ meeting; Tony Soprano, seeing his goomah. So, yeah, he'll try to pants Jaylen Brown and get in Ime Udoka’s face and flex and preen around because who’s going to stop him?

“For me, you know, you have to send a message,” Green said after Game 2. “Guys follow me on [the defensive] side of the ball. If I’m not sending a message, who is sending that message?”

In Game 1, Green more or less followed convention, guarding Al Horford and Robert Williams for about 60 percent of the defensive possessions he played. This makes sense—as Green inches towards becoming a full-time podcaster, he’s no longer quick enough to pursue quicker players on the perimeter, but his massive super brain still makes him a devastating help defender. The problem: every Warrior defender got dog-walked by Brown and Jayson Tatum, who repeatedly breached the first line of defense and then swung the ball around the compromised defense for an open 3.

Despite his characteristically modest stats (nine points on three shots, five rebounds and seven assists), Green dominated Game 2 from a vibes-based perspective. After Boston punked Golden State in the fourth quarter of Game 1 to steal home court advantage, Green took it upon himself to reanimate Golden State’s lagging defense.

Accordingly, Green assumed a larger share of Brown-duty in Game 2 and acquitted himself well; Boston scored just 17 points during Green’s 23 possessions on Brown, compared to 53 points during the 41 possessions Klay Thompson matched-up with Brown in Game 1. While Klay Thompson is firmly in the grim late-stage Obi-Wan Kenobi portion of his career, Green bothered Brown with his savviness and handsiness, rebuffing Brown’s drives and contesting his jumpers.

Brown may be a superlative athlete and shot-maker, but he dribbles like a kid playing outside at recess after it just rained and the ball is gross and he doesn’t want to get his hands all dirty. As such, Green’s grinding defense prevented Brown from feeling comfortable with the ball. Struggling to rev up to full-speed, Brown couldn't manifest his physical , ensuring that the matchup would be played on Green’s terms. Although Brown found early success and scored 13 first quarter points, Green hectored the All-Star guard into 1-11 shooting for the rest of the game.

With Brown taken out of commission by Green, Boston’s offense became uncomfortably unimodal. Even at its best, Boston’s offensive approach can be boiled down to give the ball to one of the two really good guys and hope they score. In this sense, when one of their two really good guys has no hope to score—yikes. Beyond just Brown riding the struggle bus, Boston couldn’t conjure up catch-and-shoot opportunities—Game 1 hero Al Horford scored two points on 1-4 shooting. During the Warriors’ apocalyptic third quarter run, the Boston offense shriveled up entirely and mustered just 14 points.

In this sense, Game 2 was proof that the Warriors are as much Green’s team as they are Steph Curry’s. He gives them an imperial dickishness that can only be formed by years of continued dominance—over the last eight seasons, Golden State has won 21 of the last 22 playoff series when Curry, Green and Thompson are all healthy. It’s Draymond Green's Draymond Green-ness that creates the space for Curry to shake free, that engenders the confidence for Jordan Poole to pull-up from 30 feet, that produces the energy for Kevon Looney and Gary Payton II to tussle with more-heralded Celtics.

Playing against a younger, bigger, and, frankly, better team, Green fueled the Warriors to a blow-out win through sheer force of will. When he loses Game One, everyone knows Draymond Green isn't going down 0-2—he'll orchestrate the Warriors’ attack and put the Celtics’ offense in a headlock and make himself unmissable. Who’s going to stop him?