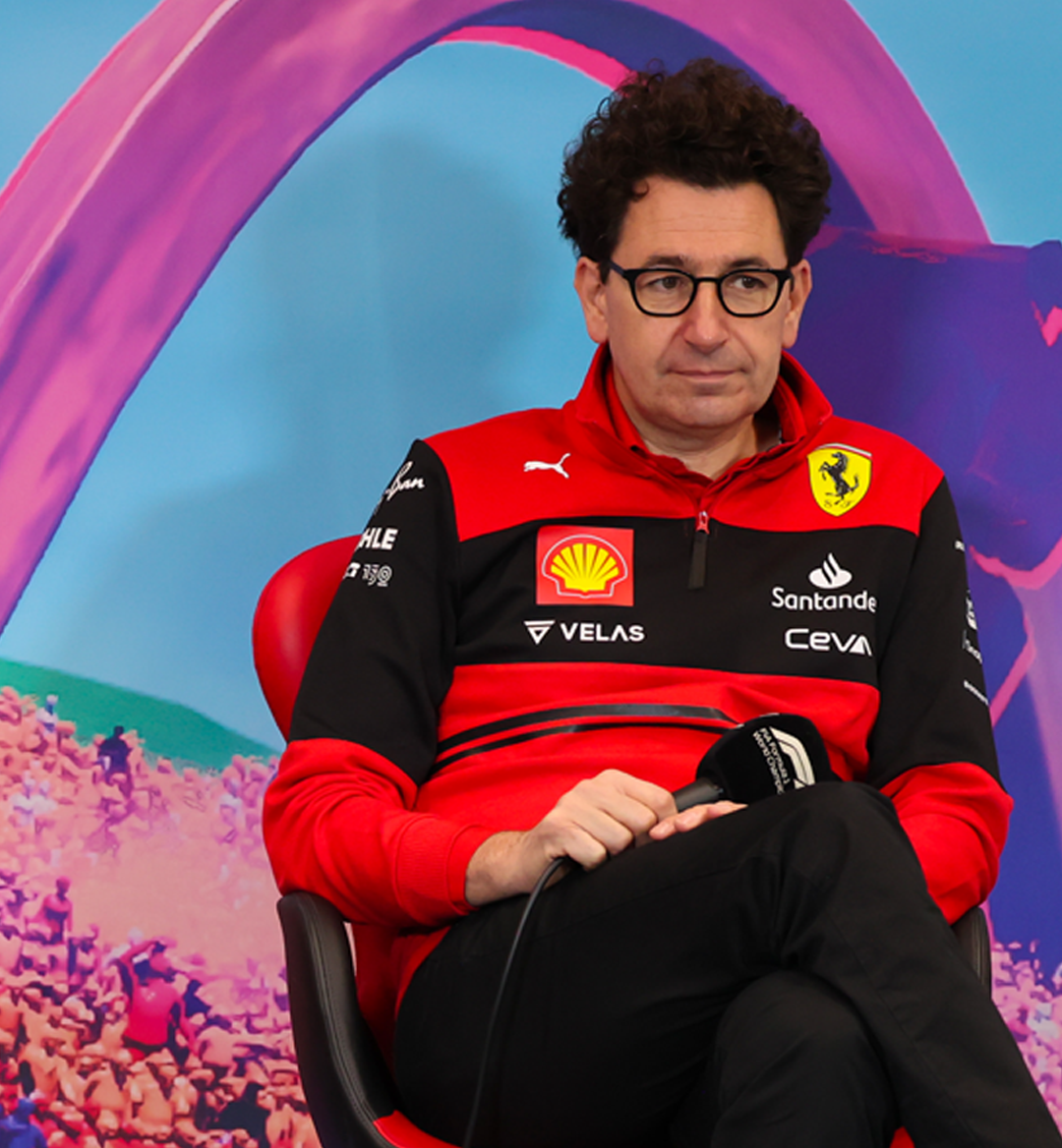 Formula 1 doesn’t really have an analog in American sports. It’s a team sport contested by loosely affiliated individuals—no other sport has scenarios where putative teammates can be each other’s biggest rival. Lording over the whole enterprise, though, are the ten F1 team principals, who run each of F1’s ten teams.

What Is an F1 Team Principal?

F1 team principals are roughly the equivalent of a general manager mixed with an owner; they have the final say-so on all matters whether it’s their team’s roster or its engineers or its finances, but they’re ultimately employees of whatever larger conglomerate owns the team. With the racing season in full swing and the Singapore Grand Prix under two weeks away, here’s everything you need to know about the ten F1 team principals.

Since taking over Mercedes’ racing division in 2013 Toto Wolff has overseen the greatest dynasty in F1 history. Under Wolff, Mercedes has won eight consecutive Constructors’ Championships, breaking Ferrari’s previous record of five straight titles. Most notably, Wolff recruited F1 legend Lewis Hamilton to Mercedes, poaching the seven-time Driver’s Champion from McLaren in 2013. In addition to overseeing the daily operations of Mercedes Grand Prix, Wolff is a substantial shareholder in the team, having purchased roughly one third of Mercedes Grand Prix when he took over as its executive director and team principal.

Prior to Mercedes, Wolff was a part owner of Williams Formula One Team and served on the team’s board of directors, but gradually divested himself from the team after he joined Mercedes, selling all of his shares by 2016.

Before crossing over to the business side, Wolff was actually a racer himself. In 1992, Wolff made his debut on the Austrian Formula Ford Championship and then also competed in the German Formula Ford circuit in 1993. While Wolff was a fairly ordinary open-wheel racer, he found considerable success racing sportscars, winning The 1994 Nürburgring 24 Hours and the 2006 Dubai 24 Hours.

Like Wolff, Horner was also originally a driver, reaching as high as FIA Formula  3000 before retiring in 1998 at the tender age of 25. During Horner’s racing career, he founded Arden, briefly serving as one of the last owner-drivers in the sport. After stepping aside from his racing career to focus on managing Arden, Horner grew his brain into one of the premier teams in all of FIA Formula 3000. In fact, he did such a bang up job growing Arden that he attracted the attention of Red Bull, which had purchased Jaguar’s F1 team and rebranded it as Red Bull Racing. In 2005, Red Bull named Horner the inaugural team principal of Red Bull Racing.

The move has paid major dividends—despite being one of the newer F1 outfits, Red Bull Racing has been tremendously successful under Horner. Having emerged as one of the dominant forces in F1 alongside Mercedes, Red Bull swept the Constructors’ and Drivers’ Championships from 2010-2013. More recently, Max Verstappen claimed the Drivers’ Championships in 2021 while racing under the Red Bull banner.

While most F1 team principals are either businessmen or former drivers or some combo of the two, Binotto has a technical background. WIth a bachelor’s degree in electrical engineering and a masters in motor vehicle engineering, Binotto joined Scuderia Ferrari way back in 1995 as a test engine engineer. Over the last few decades, Binotto steadily rose through Ferrari’s ranks, becoming the head of the engine department in 2013 and then the Chief Technical Officer in 2016. By 2019, Binotto became Ferrari’s team principal, completing his meteoric rise through the company. In the years before Binotto’s promotion, Ferrari struggled to live up to the high standard that they set during their dominating run in the early 2000s, but Binotto seems to have righted the ship; current Ferrari racers Charles Leclerc and Carlos Sainz Jr. are both among the handful of top drivers in the world.

Szafnauer is one of the newest and boldest F1 team principals. Following the rebranding of Renault racing as Alpine in 2021, Szafnauer took over in 2022 and quickly declared that Alpine would compete for world championships within 100 races, despite the fact that the team was only one year old at the time. Before joining Alpine, Szafnauer was a motorsport lifer, serving a variety of roles at Honda and Force India. Infamously, Szafnauer was the team principal at Aston Villa, but abruptly resigned and took the Alpine job within that same month.

In 2019, Seidl became just the fifth team principal in McLaren’s storied 56 year history. Formerly the principal of the successful Hybrid Porsche LMP1 sportscar team, Seidl had no F1 experience before joining McClaren. Interestingly, McClaren did not have a principal before hiring Seidl. The team abolished the position altogether in 2014 because of a belief that it was unnecessary and sclerotic, but brought the title back when Seidl came aboard.

Although AlphaTauri has a reputation for being Red Bull Racing’s little brother (they share a parent company), Tost is an impressive figure in his own right. To a degree, his path mirrors that of Red Bull’s Horner—both are former racers who became F1 team principals in 2005 after Red Bull took over an existing team. Before joining AlphaTauri, Tost was the Track Operations Manager at Williams. The oldest of the ten F1 team principals, Tost has been around racing for upwards of 40 years dating back to his own racing career.

In 1996, Vasseur founded ASM, which quickly became the dominant team on the Formula 3 Euroseries tour. Although Vasseur studied aeronautical engineering in college, his greatest asset as a team principal has been his business savvy rather than his technical know-how. With ASM, Vasseur partnered with Renault to win the French Formula 3 championship in 1998 and then partnered with Mercedes to win the event four consecutive years from 2004-2007. In 2016, Vasseur was given his first opportunity to be an F1 team principal, but left Renault after one season. Sauber quickly scooped Vasseur up in 2017 and kept him installed as team principal even after rebranding the team as Alfa Romeo in 2018.

As the head of Haas since 2014, Steiner has the special distinction of being the only F1 team principal to be based in the United States of America (as the head of the US-based Haas, Steiner also has the special distinction of being the only resident of Mooresville, North Carolina to go to Monte Carlo and Baku). Prior to helping charter the Western Hemisphere's premier F1 team, Steiner followed a conventional career path, steadily working his way up established teams like Jaguar and Red Bull. Since Steiner is the founder of Haas as well as the principal, he’s inextricably linked to the team, as evidenced by his star-turn on the first season of Netflix’s Drive to Survive.

Like Ferrari’s Mattia Binotto, Krack is an engineer and scientist at his core. Originally making a name for himself when he became BMW Sauber’s chief engineer in 2003, Krack has a long resume that touches far flung corners of the racing universe. Before taking over Aston Martin in 2022 following Szafnauer’s departure, Krack spent most of his career working across various different BMW projects, overseeing the team’s lesser-known teams.

Following the end of his racing career in 1985, Capito threw himself into the business and technological side of  F1, building a strong network of coworkers and friends that he’s accumulated over the course of his 37 year career. As a karmic reward for all the years and hours he spent working round F1, Jost Capito became the new bossman at Williams in 2020. Notably, this is Capito’s second go-around as an F1 team principal—his exemplary work at BMW earned him the top gig with McClaren in fall 2006, but he subsequently quit by the end of the workday.