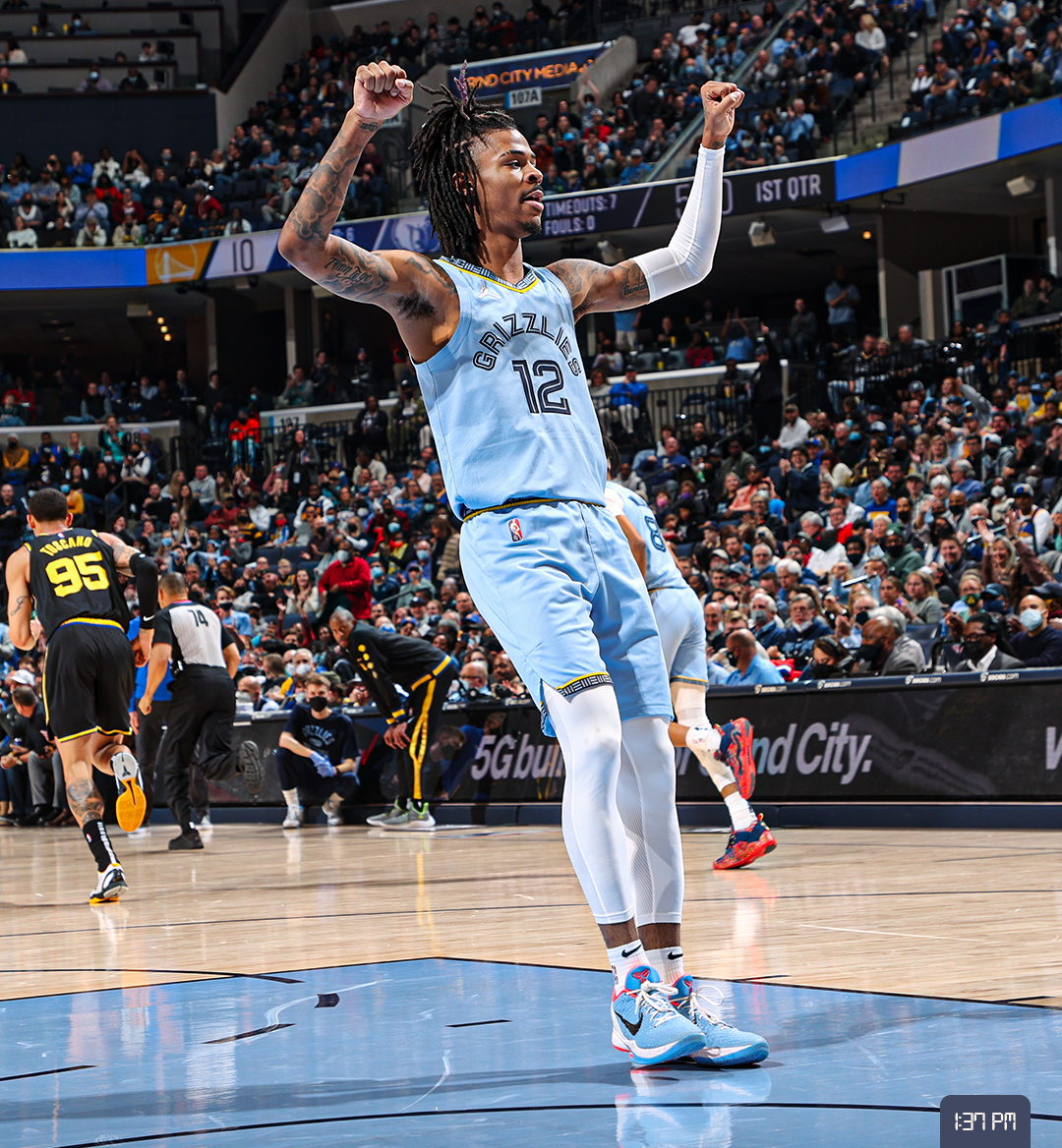 Ja Morant, the most exciting player in the NBA, is impressive from even the dry, neutral-tone vantage point of a Basketball Reference page. Averaging 24.7 points, 6.7 assists and 5.7 rebounds, the 22-year-old point guard is the talisman of a maybe-elite, definitely-for-real Memphis Grizzlies team. On an eggheaded macro level, he’s one of the 10 best offensive players in the world (and the youngest in that dectet), according to Estimated Plus-Minus, the current gold-standard of wonky basketball stats. On a more micro scale, Morant’s game log is littered with sneakily signature performances as he’s stolen wins from putative contenders and hung 30-pieces (and sometimes even 40-pieces) on them in the process; over the course of the Grizz’s on-going ten-game winning streak, Morant has char-broiled the Warriors, Lakers, Suns and Nets.

But these gaudy numbers are mere metonymy for the full Ja Morant Experience. Sure, his  57.5 percent True Shooting is a career-high number, but it doesn’t inspire much hootin’ and/or hollerin’. It’s one thing to see that the budding superstar is having one of the most prolific age-22 seasons in NBA history and it's another thing entirely to witness him control a game with the swagger and confidence of a mega-preacher. There are lots of guards who can amass similarly gaudy numbers; there’s only one Ja Morant.

Whereas most All-NBA-caliber guards are expert shooters, Morant exists within a more (Steve) Francis-can order. A scoring point guard whose success lies in his overwhelming athleticism and rim-pressure, he’s the byproduct of an early-aughts hauntology, unrelentingly hurling himself into the paint just as Steve Francis, Baron Davis and Allen Iverson did before him.

He imbues his drives with gyroscopic motion, varying the length and speed of his strides on a step-by-step basis so that no defender could possibly mirror them. Like a noble gas or somebody playing Wordle, Morant fills whatever space is available. Give him an open lane and he’ll imposingly storm down the middle of the court, daring a big man to fuck around and find out. Cede space to him on the perimeter to try to goad him into a jumper, and he’ll use it to build momentum before trebucheting himself towards the rack. Sardine the paint with help defenders to cut off one of his drives and he’ll squirm his way to freedom. As such, Morant’s true genius isn't that he’s faster and bouncier than everyone else, but that he can pair his explosiveness with such a heightened sense of proprioception—on the rare instances that he can’t zoom past an opponent, he’s still able to wiggle by them.

Interestingly, Morant’s usage this year isn’t radically different than it was in his first two seasons. The main difference is that Morant has just gotten better at everything. This year, he scores 13.4 points on 20.3 drives per game, up from 9.5 points on 18.4 drives per game in his sophomore campaign,; he’s now in the 73rd percentile as a pick-and-roll ball-handler and the 85th percentile as an isolation scorer, after placing in the 41st percentile and 57th percentile respectively last season (all stats courtesy of NBA.com). Despite the fact that he's always been a stylish player, this is the first year he’s been able to translate his entertaining-ness into elite scoring production.

Beyond his bucket-getting, Morant has continued his maturation as a high-level playmaker, exploiting the rotations that his rim-pressure provokes. He cruelly blends his deliveries into his dribbles and finishes—one-handed skip passes are disguised as harmless dribbles, contested lay-ups evolve in mid-air to become dump-offs to open teammates. When Morant has the ball, opposing defenses short-circuit themselves trying to stop him, so paralyzed by the fear of doing the wrong thing that they end up not doing anything at all.

Although Morant’s on/off splits are skewed by the fact that the Grizzlies essentially didn’t miss any shots during the 12 games that he missed with a knee injury, his playmaking impact is obvious. When he’s in the game, the Grizzlies’s offense scores 4.2 more points per 100 possessions than when he’s on the bench, per Cleaning the Glass. Similarly, the Grizz put up an efficient 56.2 percent True Shooting as a team with Morant, which is nearly three percentage points higher than their Morant-less mark.

Almost single-handedly, Morant has restored the feeling in Memphis after he parachuted in from Murray State to rescue the Grizz from their post-Grit ‘n Grind wilderness. In the 137 weeks since Morant was drafted, he lifted the Grizzlies out of their rebuilding doldrums and transformed them a fringe playoff team, and then into an actual playoff team and, now, into an actual contender. The vibes: they’re good. At 29-14, the surging Grizzlies have more wins than every team besides the Golden State Warriors and Phoenix Suns. Since December 1st, the Grizzlies have won 18 of their last 22 games with a net rating of +12.6.

More than any other player in the NBA, Morant possesses a somatic magnetism so powerful that even opposing fans can’t avoid succumbing to it; outside of his dad, Morant has no haters. He’s an accelerant for hope, embracing his entire team within the valances of his good vibes. Flanked by rabid, skilled sous chefs like Desmond Bane, Jaren Jackson Jr and Dillon Brooks, he’s made the Grizzlies the NBA’s most vital squad. There’s a new team in town: it’s Memphis.