The 10 Most Unexpected NBA Trades Ever 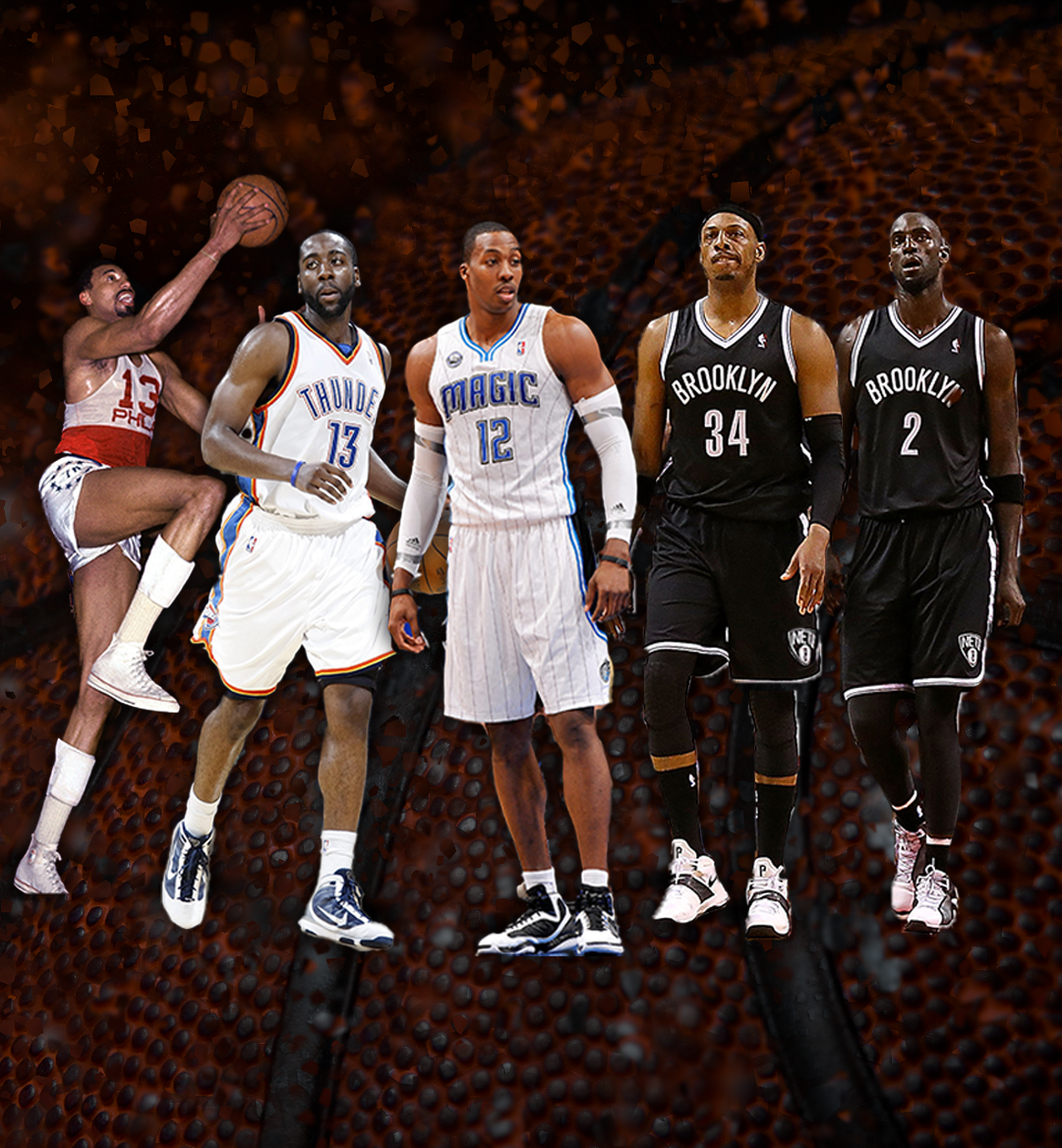 Even though a typical NBA season, including the playoffs, runs between October and June, the National Basketball Association is a year-round league. In the off-season, teams trade off unhappy or underperforming players in hopes of revitalizing their chances at a title. This is the time where NBA fans are steadily on the lookout for rumors regarding potential trades.

Every season, players are swapped between franchises. With the addition of a new player or two, some teams are immediately thrusted into title contention. On the other hand, some trades don’t make as much sense and a team ends up paying a steep price for the moves they’ve made.

While some trades can be predicted, every now and then, a trade or two comes along that completely blindsides everyone who is paying attention. Here are the 10 most unexpected NBA trades of all-time.

10. Shaquille O’Neal to the Miami Heat 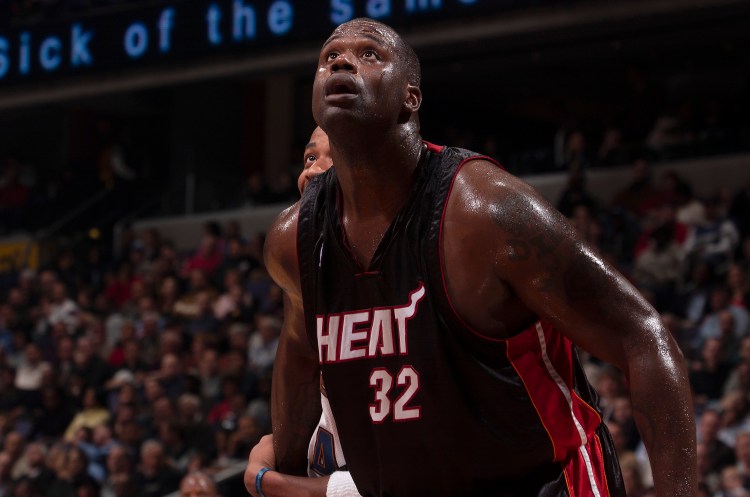 The last team to three-peat as NBA champions is the early 2000 Lakers. Back then, Kobe Bryant and Shaquille O'Neal were unstoppable as teammates, winning three championships in a row from 2000 to 2002. They returned to the Finals in 2004, but lost to the Detriot Pistons. The unexpected lost, as well Laker coach Phil Jackson not receiving a contract extension would ultimately blow up the team. It was shocking to see the Lakers ship out Shaq after a couple of unsuccessful post-season runs.

9. Dennis Rodman to the Chicago Bulls 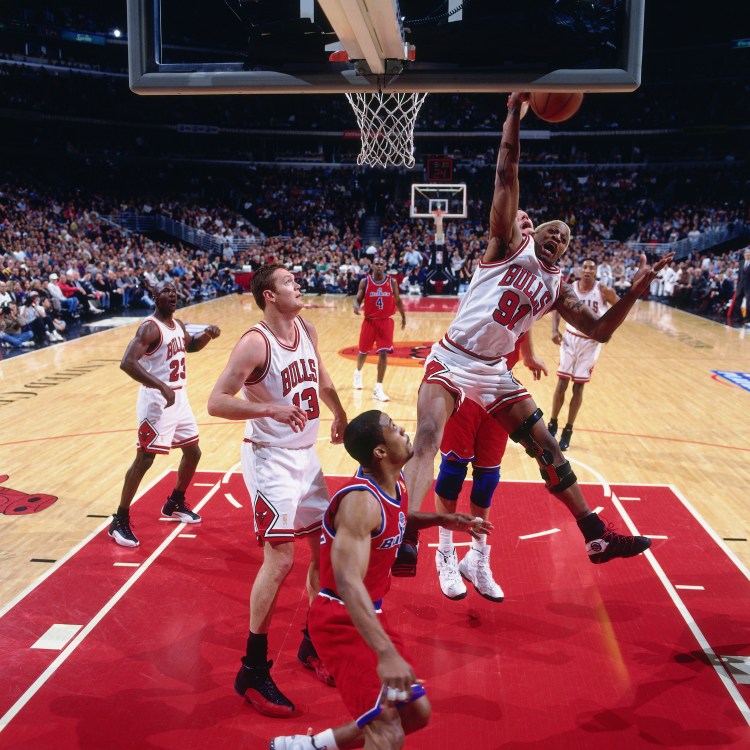 For years, the Michael Jordan-led Chicago Bulls were stuck in purgatory, often falling to the Isiah Thomas' Detroit Pistons. Once they finally dethroned the Pistons in 1991, the Bulls era had officially begun. With so much bad blood between the Bulls and Pistons, fans were caught off guard when Chicago traded for former Pistons forward Dennis Rodman. It all worked out however, with Rodman helping team Jordan win 3 more championships. 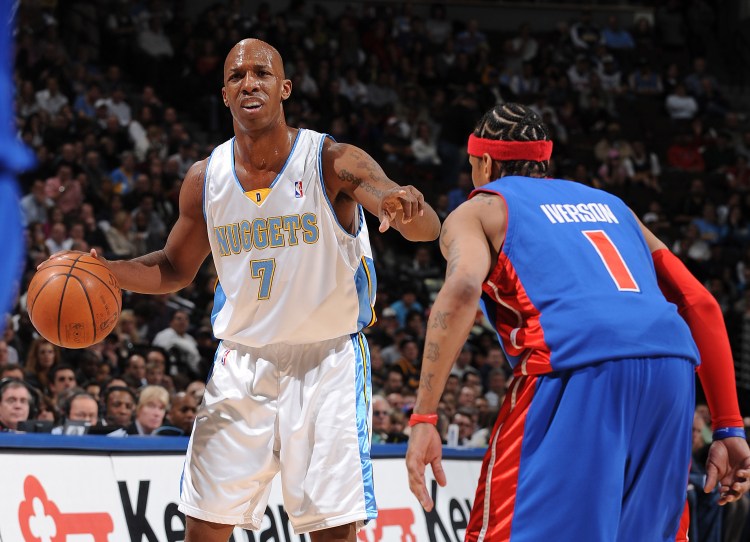 The 2004 Pistons were truly an anomaly, winning the NBA championship without a real superstar. They never reached the same success in following years, and ultimately went all-in on Allen Iverson in 2008. It was mystifying to see the Pistons trade the guy who was their finals MVP for someone known for having off-court issues. 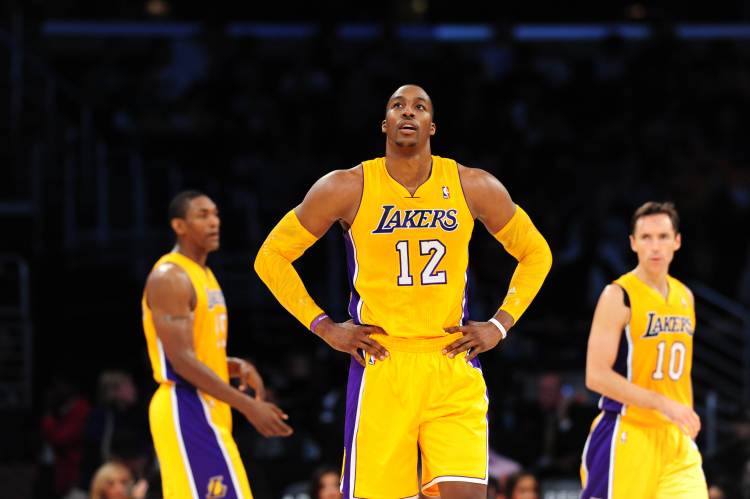 After the Lakers won back-to-back finals in 2009-2010, there wasn't a clear sign on where to go next. Do they blow up the whole team and look towards the future? Do they trade for a premier young player and dip into the luxury tax to build another contender? They're the Lakers, it's no mystery they went with the latter. It was still shocking to the NBA world to see Dwight Howard paired up with Kobe Bryant and Steve Nash. Due to all three players dealing with nagging injuries, we never saw the true potential of this super-team. 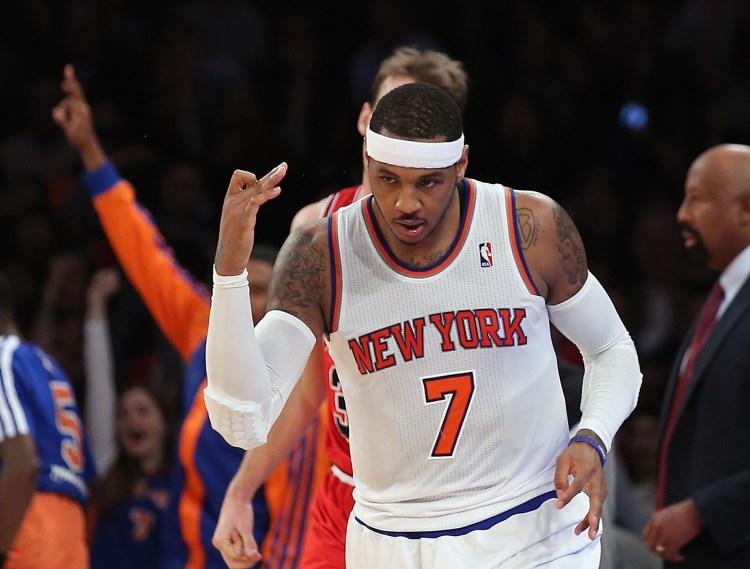 In 2010, it became clear that Carmelo Anthony wanted out of Denver. There were a number of contenders in the Melo sweepstakes, but in the end, New York Knicks came out victorious. The Knicks sent what was at the time one of the biggest hauls we'd ever seen for a single player. Anthony would play over 400 games for the Knicks and they would win one playoff series.

5. Paul George Teams Up With Kawhi 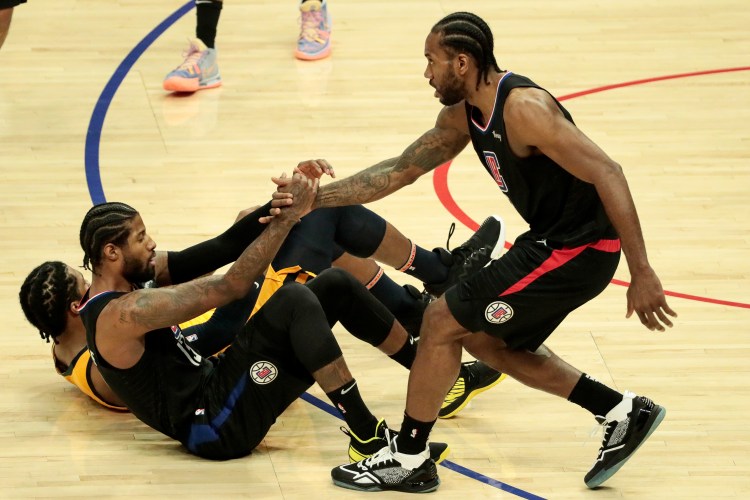 Kawhi Leonard shocked the world in 2019 after bringing the Toronto Raptors their first ever NBA championship. Months later, the Finals MVP shocked the world again when he decided to dip out on the Raptors and join the LA Clippers. Around the same time, Paul George who had just finished 3rd in MVP voting was sent to the Clippers for several picks and players. Steve Ballmer has been hell-bent on creating the new basketball mecca, and these two superstars may be the last pieces. 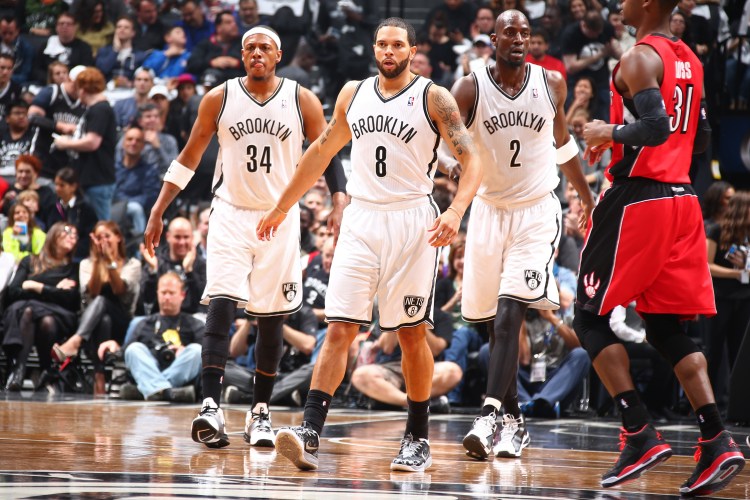 Once LeBron James took his spot at mountain top of the NBA, the Celtics knew they could not compete with their currently constructed roster. It still shocked the NBA world to see two of the Celtic's most historic players be shipped off to a division rival in Brooklyn. The Celtics got an incredible selection of picks that set them up for years, maybe even decades of success. 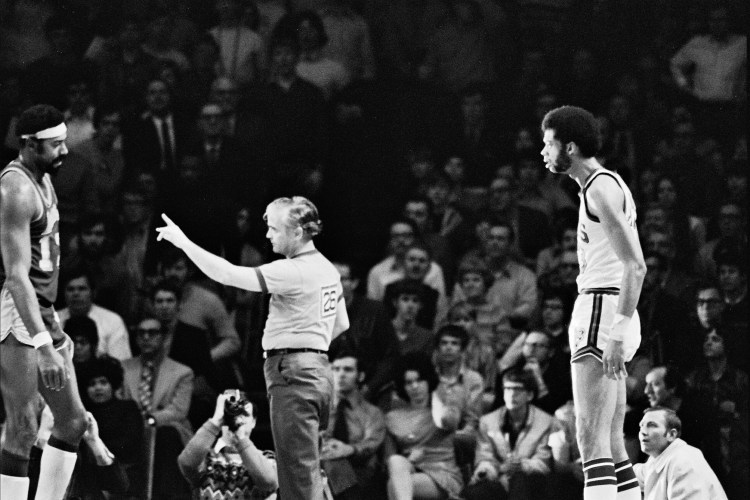 In the late 1960's, NBA superstars weren't traded around the league the same way they are today. That's when Jerry West convinced the Lakers to trade for aging superstar Wilt Chamberlain. The Lakers were able to pull off the trade and bring a championship to Los Angeles with Wilt in 1972. 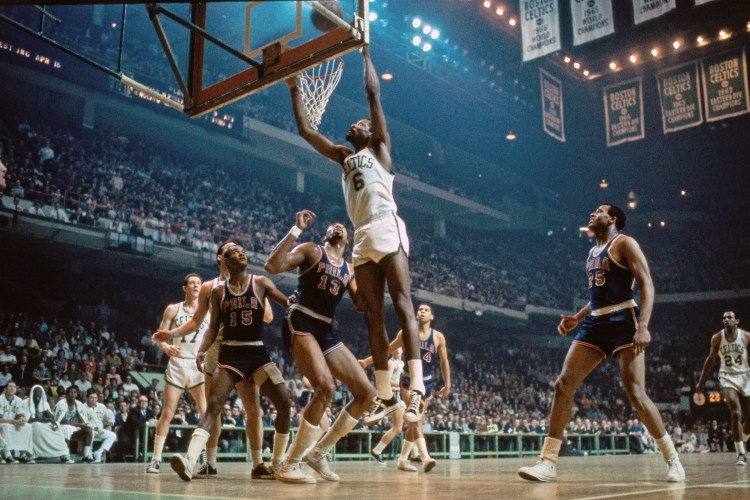 Apr 30, 1956. Celtics get: Bill Russell. Hawks get: Ed Macauley and Cliff Hagan. Royals get: 1 week of the Ice Capades

What many NBA fans don't know is that the Celtics actually traded up to draft Bill Russell. The St.Louis Hawks held the 2nd pick in 1956, a time when Missouri was going through the beginning stages of desegregation. They had no interest in drafting Bill Russell, so, the Celtics traded virtually nothing to move into the 2nd spot. They also promised the Kansas City Royals, holder of the first pick, a week with the traveling ice show the Ice Capades if they didn't draft Russell.

1. The Beard goes to Houston 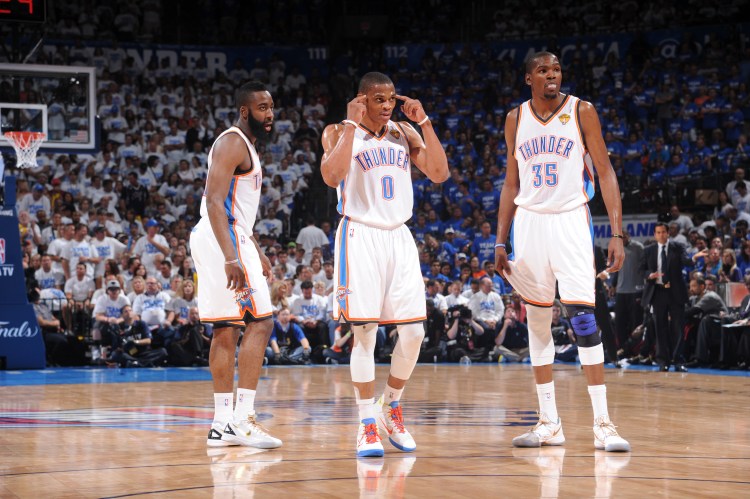 The 2012 NBA Finals saw LeBron James claim his first NBA title by defeating an up-and-coming Oklahoma City Thunder. The Thunder had the defending 6th Man of the Year and budding superstar James Harden slated to be a restricted free-agent after the next season. Instead of letting Harden play out that year or give him the max contract, they traded him to Houston for a small return. Harden would go on to become league MVP and break a multitude of scoring records. Thunder fans are left to ponder, what if they ran it back?