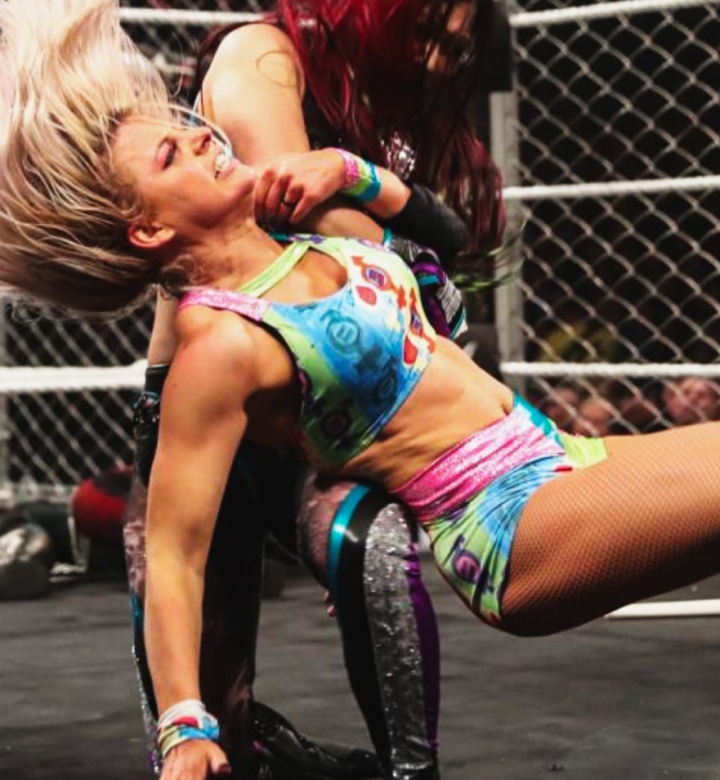 After Survivor Series weekend, there is now one clear and objective truth in professional wrestling: The NXT women’s division is on top of the world. That’s the main conclusion to take away after WWE finished off its yearly “brand vs. brand” showcase extravaganza. From Rhea Ripley to Io Shirai, through a handful of others and ending with the NXT Women’s Champion Shayna Baszler, the brightest stars of the weekend were all from the black-and-gold brand’s best division.

First, in the opening match of TakeOver: War Games on Saturday night, Team Ripley—the namesake, Candice LeRae, Tegan Nox and Dakota Kai, stepping in for the attacked and injured Mia Yim; more on this in a second—took on Team Baszler—the champion, Bianca Belair, Shirai and NXT U.K. women’s champion Kay Lee Ray—in the first-ever women’s War Games match. To say it ruled is to undersell it; it definitely shone brighter than the men’s version in the main event, both as a match and as a coherent storyline. Kai turning on her supposed best friend Nox halfway through the match, leaving Ripley and LeRae in a 2v4, was genius, as was Ripley (who should be the next big women’s star; she’s that good) picking up the win clean over Baszler:

Ripley starred again on Sunday in the show-opening five-on-five-on-five brand match against Team Raw and Team SmackDown. There was too much action to recap blow by blow, but in a match designed to eliminate everyone, NXT not only won, but also had three survivors: Ripley, LeRae and Shirai. Those three wrestlers are the reason that the NXT women’s division is so on fire right now. You’ve got the future star in Ripley, the lovable babyface (built up in the way that only NXT can; think Sami Zayn in 2014) in LeRae and the work-rate genius who is also a wonderful heel character in Shirai. NXT winning was the right choice, but the way they did it was even better.

And then there was Shayna Baszler. The long-reigning NXT women’s champion has gone from a violent curiosity in her debut to the best champion in a division that has only ever had great champions. Not only does she play the bully heel better than anyone, but she’s also got the catch wrestling skills to back that up. In the main event of Survivor Series, Baszler went up against two of the best female wrestlers in the company (Becky Lynch and Bayley) and outshone them, not just by winning but by being the one who gave the match the edgy realism it needed to shine. And while Lynch got the last word by attacking Baszler after the match, the fact that the final image even involves Baszler, in her main roster PPV debut, is all you need to know. She and the NXT women are for real, and now everyone can see it for themselves.

Is there any set of talent anywhere in the world that can come close to this batch of women? You could look at All Elite Wrestling’s tag team division, which has stars and depth but no cohesive storylines that link everyone together. It often feels like the Young Bucks are off doing their own thing while everyone else is supposed to be chasing SCU. And while New Japan’s heavyweight scene is obviously filled with some of the best wrestlers in history, the departure of Kenny Omega and the failure of Jay White to become a true star heel has stunted a bit of that potential for the division as a whole. Kazuchika Okada can only carry you so far.

And so, the crowns rest on the heads of the NXT women. Not only do we have the long chase for Baszler’s title to look forward to—a chase that now has some main roster credibility following her choking out Bayley on Sunday—but we also have Kai’s heel turn, Mia Yim’s injury storyline, and Shirai’s … everything. (She really might be the best wrestler in the world.)

After the so-called NXT Horsewomen—Sasha Banks, Bayley, Charlotte and Becky Lynch—left, it took NXT a bit to get its women’s division back on track, at least underneath the title picture while Asuka was there. For the first time, though, it sure feels like the entire division is not just talented but involved in storylines, and the combination of depth and talent should only continue to flourish, particularly if Ripley (or someone else, but it really should be Ripley) takes the belt off Baszler in order to open up some new plot potentialities. Regardless of where we go from here, TakeOver: War Games and Survivor Series proved that the work NXT has put into developing its women’s division has been worth it, and now fans can reap the rewards every Wednesday night.