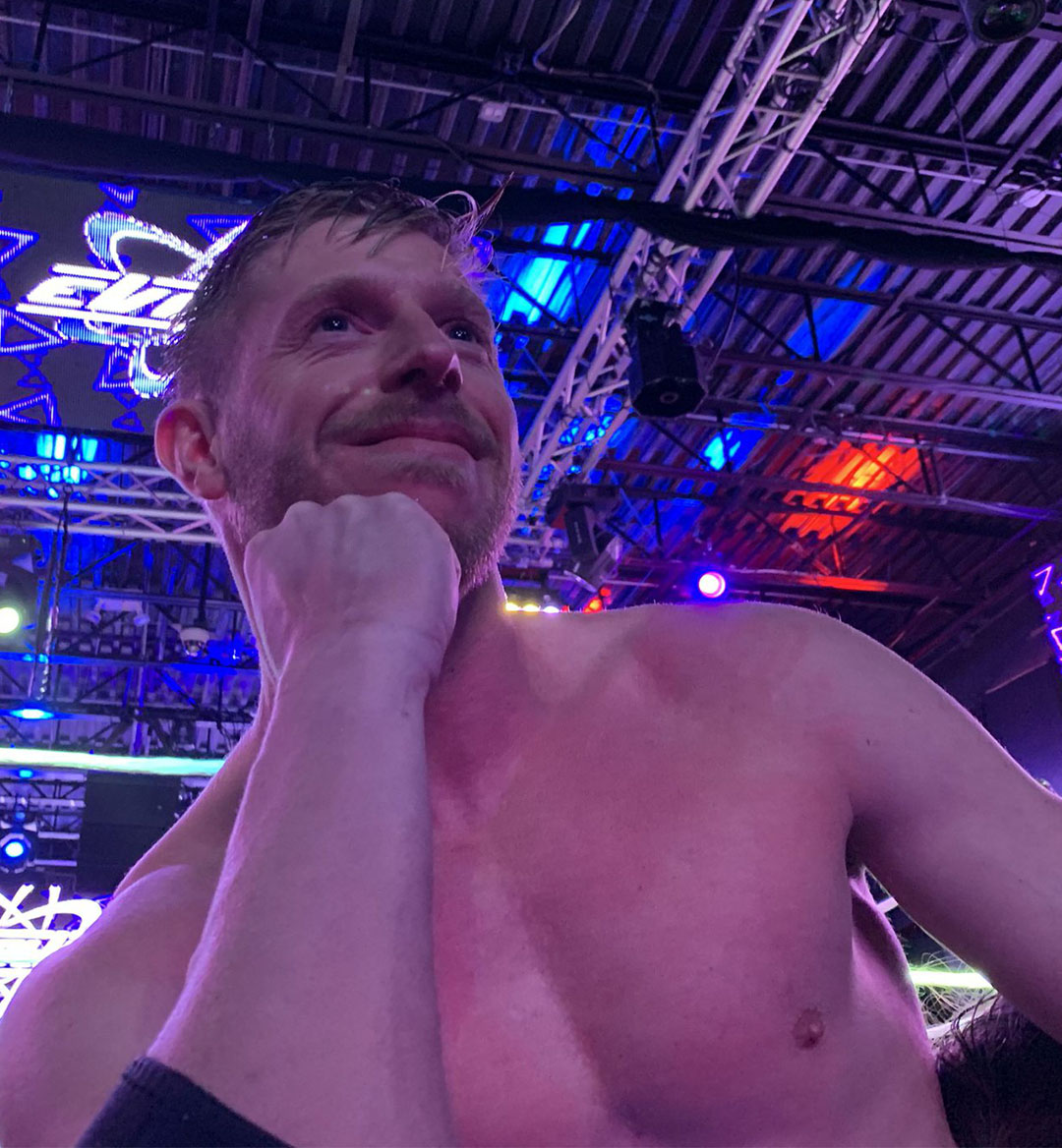 In the front row of Outlaw Wrestling on February 21 in Brooklyn, New York, a red-faced, middle-aged man screamed at the ring, frothing spit flying from his mouth.

“This is bullshit!” he yelled over and over, with a lividity so unconstrained it eventually prompted the in-ring performers to attempt to quell his rage.

The refrain that “kayfabe is dead” is a common complaint amongst more serious wrestling fans who bemoan the lack of “reality” in pro wrestling at the moment—so many stars have begun to openly acknowledge the artificiality inherent in their chosen medium. You wouldn’t know anything was fake, though, judging by the aggravation expressed by this audience member. What, exactly, was he so angry about?

This man’s ire was mostly directed at a dashingly good-looking performer named Orange Cassidy, a grappler who’s earned himself the moniker of the most enigmatic star in indie wrestling. Like Ryan Gosling’s inexorably cool character from Drive dropped unexpectedly into an episode of Looney Tunes, Cassidy’s bizarre postmodern gimmick is that he sort of doesn’t really care (maybe doesn’t even know?) that he’s in a fight.

Cassidy usually arrives in the ring with an aloof, hungover stumble, wearing ripped jeans, sunglasses and his own merch: awhite T-shirt featuring a picture of him wearing the same white T-shirt in a sort of sartorial mise en abyme. He rolls, in slow motion, under the bottom rope and then gives a barely detectable thumbs-up to the crowd, which always returns his gesture with explosive enthusiasm. Cassidy then tends to open his matches with a series of less-than-half-hearted punches and kicks, to which audiences cheer in the rhythm of a more normal wrestling match, mocking the expected beats of a regular bout. Cassidy rarely takes his hands out of his pockets and barely runs in a pace more intense than a brisk jog. He dodges opponents’ attacks with arrogant feints, hardly bothering with a parry or counterattack. Once in a blue moon, he’ll break out an impressively graceful tope con hilo, followed by—you guessed it—a lazy thumbs-up. He sometimes wins through a series of fortunate mistakes or by surprise roll-up after spitting orange juice, presumably purchased to help assuage his aforementioned hangover, in his opponent’s eyes.

Does Cassidy’s character have some kind of elaborate backstory? No one really knows the history of this kid-friendly drunken master: His mostly broken website is filled with standard space holding “lorem ipsum.” He almost never grants interviews.

The wrestling industry is currently in a bit of a crisis with regards to “kayfabe” (frequentlydefined as the illusion of reality maintained within the industry). Although foreign companies like NJPW continue to present its product as a sport, lately WWE seems to be speaking out of both sides of its mouth on this matter. It brands itself not as wrestling but as “sports entertainment” and has more recently flirted with (artificially created?) drama over Ronda Rousey calling out her rivals and the entire industry as “fake.” Meanwhile, it’s impossible to tell how newer brands like AEW will handle the very concept of reality. If Being the Elite (a semi-kayfabed YouTube series that inadvertently spawned the rising federation) is any indication of what’s to come in Cody Rhodes’s new company, chances are they’ll keep it a bit more playful.

But as the art form of pro wrestling grows to include hugely popular yet deeply self-reflexive and sexily parodic characters like Joey Ryan, Effy and RJ City, how can legitimate federations that hire said talent maintain a sense of reality at all? Do these performers have a self-imposed limit on their success due to the way their characters question the reality of wrestling itself? Or does none of that matter at all anymore?

These questions aren’t exactly what the man in Brooklyn was furious about, but the dilemma around the performativity of wrestling was the locus of his anger: Why would a wrestler openly—through every single action he performs—acknowledge that wrestling is fake?Ironically, by acting out the supposed fakeness of wrestling, Cassidy has managed to elicit more real emotions from the audience than perhaps any other star in recent memory, even if that emotion is jubilance—or rage—about the fakeness of wrestling.

Cassidy is now in a position to push this quagmire even further: As the current Independent Wrestling Champion (the title belt for which he carries around in a JanSport backpack and wears backward in photo shoots), Cassidy has recently faced huge names including NXT’s Velveteen Dream, thus absorbing even more mainstream talent into his cartoony world. As WWE and AEW explore the limits of wrestling as a genre of performance rather than a sport, could Cassidy be pushing the envelope too far to ever achieve more mainstream success? Does this gimmick have limits?

Cassidy’s next big move is headlining respected indie federation GCW’s Wrestlemania weekend event, appropriately named “Orange Cassidy Is Doing Something or Whatever,Who Knows???” on Saturday, April 6. What exactly will happen at that event (will there even be wrestling?!) remains unknown. Cassidy seems to be force-feeding the snake of kayfabe itsown tail, creating a curious ouroboros of irony.

But if we’re having fun, who really cares?