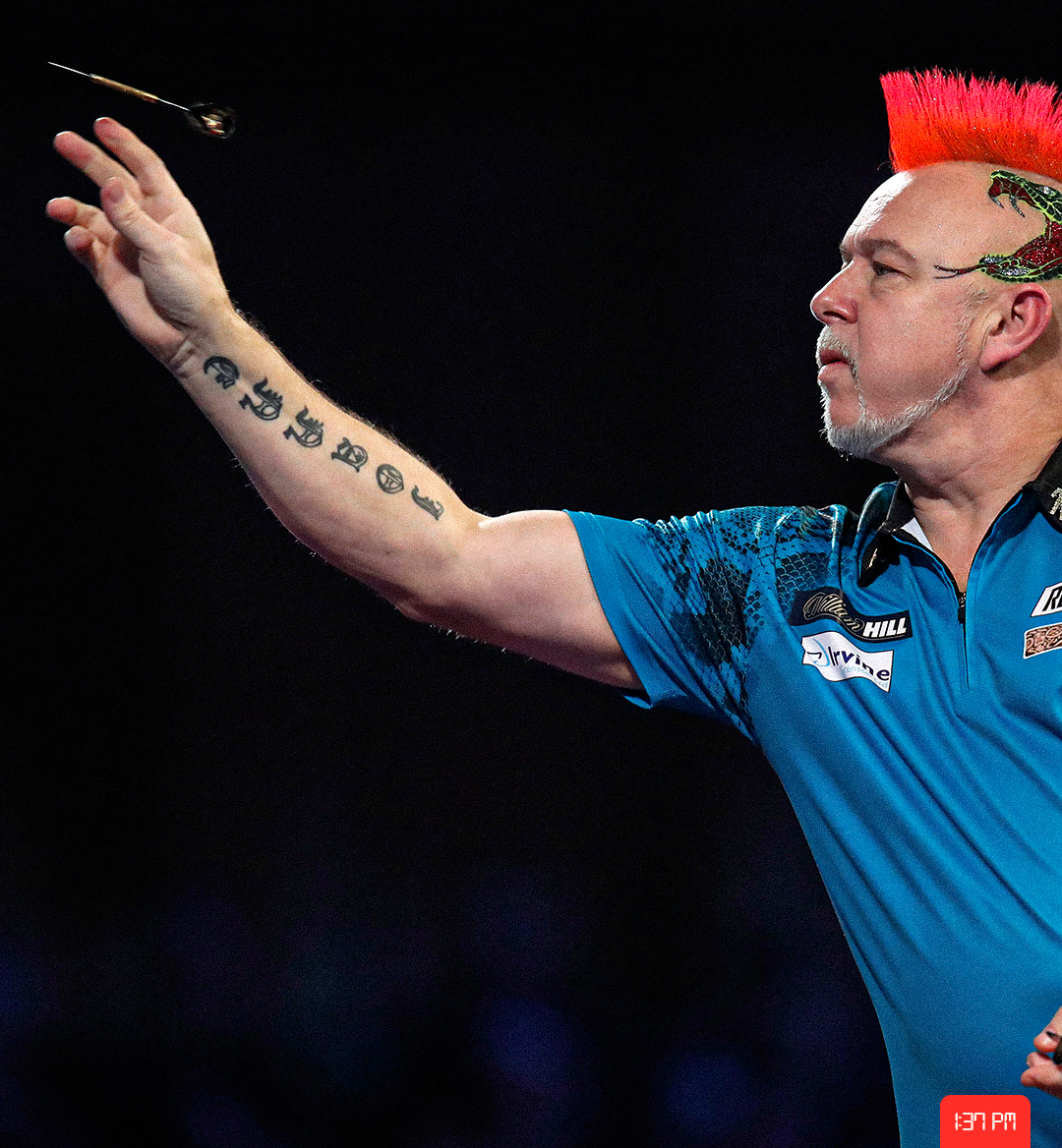 Last night, Peter Wright won his second Professional Darts Corporation World Championship in London, outlasting Michael Smith 7-5 in an instant-classic final. Against Smith, Wright weathered his opponent’s torrent of trebles (when all three darts land in the triple-20 spot) and won the match despite being outscored on aggregate. Whereas Smith scored in irregular, massive bursts, Wright coolly sequenced his shots to set up clean check-outs as if he were building towards the perfect last bite of a sandwich. Even when a barrage of Smith trebles left him on the brink of a daunting two set deficit, Wright stayed composed; his torrid eight-leg winning streak late in the match was so dominant that it bordered on anti-climax.

If this all sounds like gobbledy-gook, that’s ok—the scoring system is unintuitive and confusing and involves lots of arithmetic anyways. Besides, the most important thing to understand about darts is that it’s weird. More precisely: the weirdness is the point. The PDC is quickly becoming big business (darts is the second most-watched sport in England and Wright won a £500,000 purse), but it maintains a shambling, sloshed charm. Predictably, the whole crowd is always drunk.

“When you analyze the viewing habits of darts fans, approximately one-third of their time is spent actually watching the darts,” PDC chairman Barry Hearn said to The Ringer in 2019. “Two-thirds is spent socializing, drinking, gambling.”

Adding to the good vibes, the athletes also don’t take themselves too seriously. Although the athletes are generally the expected size and shape of guys who’ve devoted their lives to a pub game, they’ve all assumed WWE-esque personas, complete with their own nickname (“The Dream Maker,” “The Ferret,” “SuperChin”)  and signature entrance music. For the finals, Wright (aka “Snakebite”) rocked a Troll Doll-ish neon red mohawk, with a sparkly picture of a snake painted onto one side of his head and a snakeskin pattern lacquered onto the other; in comparison, Smith (aka “Bully Boy”) looked downright mellow with his tattoo sleeve and gel-spiked faux-hawk.

Despite the revelry and their wacky outfits, Wright and Smith seemed to be the only two people not having any fun. Together on stage, they hid their nervousness behind forced stoicism. With their serious frowns (and portliness and general essence), they more closely resembled two Limp Bizkit roadies with the Sunday scaries than they did pro athletes..

After the two of them tore through the bracket over the last three weeks to make the finals, both Wright and Smith succumbed to the enormity of the moment to start the match; in the first set, the pair stumbled through an agonizing 28 dart leg, one of the longest in PDC history. Granted, both dartists found their bearings after a ragged start, but they each shot far less accurately than they had in the tournament’s earlier rounds.

Over the course of their 12 sets, Snakebite and Bully Boy revealed that, underneath all the pageantry, darts is an isolating, anxious sport, especially at this galactically-high level of competition. Sure, Wright and Smith had to tune out blaring music and indecipherable chants about English and Scottish geopolitics, but they otherwise played in static, empty space—there’s no defense or contact or variability. Outside of the fact that one guy was given a big trophy and a bigger check at the end, Wright and Smith parallel played games that were almost entirely independent from each other. While soccer or basketball are essentially excuses to run around with you friends, darts is a solo war against imperfection. The only opponent is your own capacity to fail.

Having secured his second PDC Championship in the last three years, Wright, a 51 year-old former tyre fitter (British for “car mechanic”) did more than fully slough off his previous reputation as a chronic bottler (British for “choker”): he cemented his status as one of the greatest tungsten tossers of all time. By becoming just the sixth man ever to win the tournament twice, Wright absolved his previous losses.

Conversely, for Smith, this defeat is another false start as he struggles to graduate from a contender to a champion—on the bright side, at least he fared much better this year than he did in his debut appearance in the finals three years ago when he punched a wall in frustration mid-match and broke his hand. A six-time runner-up in major tournaments (albeit also a zero-time champion), it’s widely accepted that Smith is one of the most talented players in the PDC. Accordingly, these recurring disappointments may simply be necessary growing pains before Smith emerges as a true juggernaut. What if the only way to develop a Mamba Mentality is to get snake-bitten first?

“It's not about me, it's about the future of darts and [Michael Smith] let me in today,” Wright told Sky Sports during a postgame interview. “I feel so bad because as soon as he gets a major, he’ll just trounce everybody.”

But the hard part remains getting that first major. Even as he carried a lead deep into the finals and set the record for most trebles in a single tournament, Smith was crushed by the crest of the crowd, flubbing momentum-shifting shots in the first, 10th and 12th sets. A perennial fan-favorite, he watched centimeter-long misses turn his long-awaited coronation into more unfulfilled catharsis. By that point, it was no longer his party and he cried when he wanted to. You would too if it happened to you.