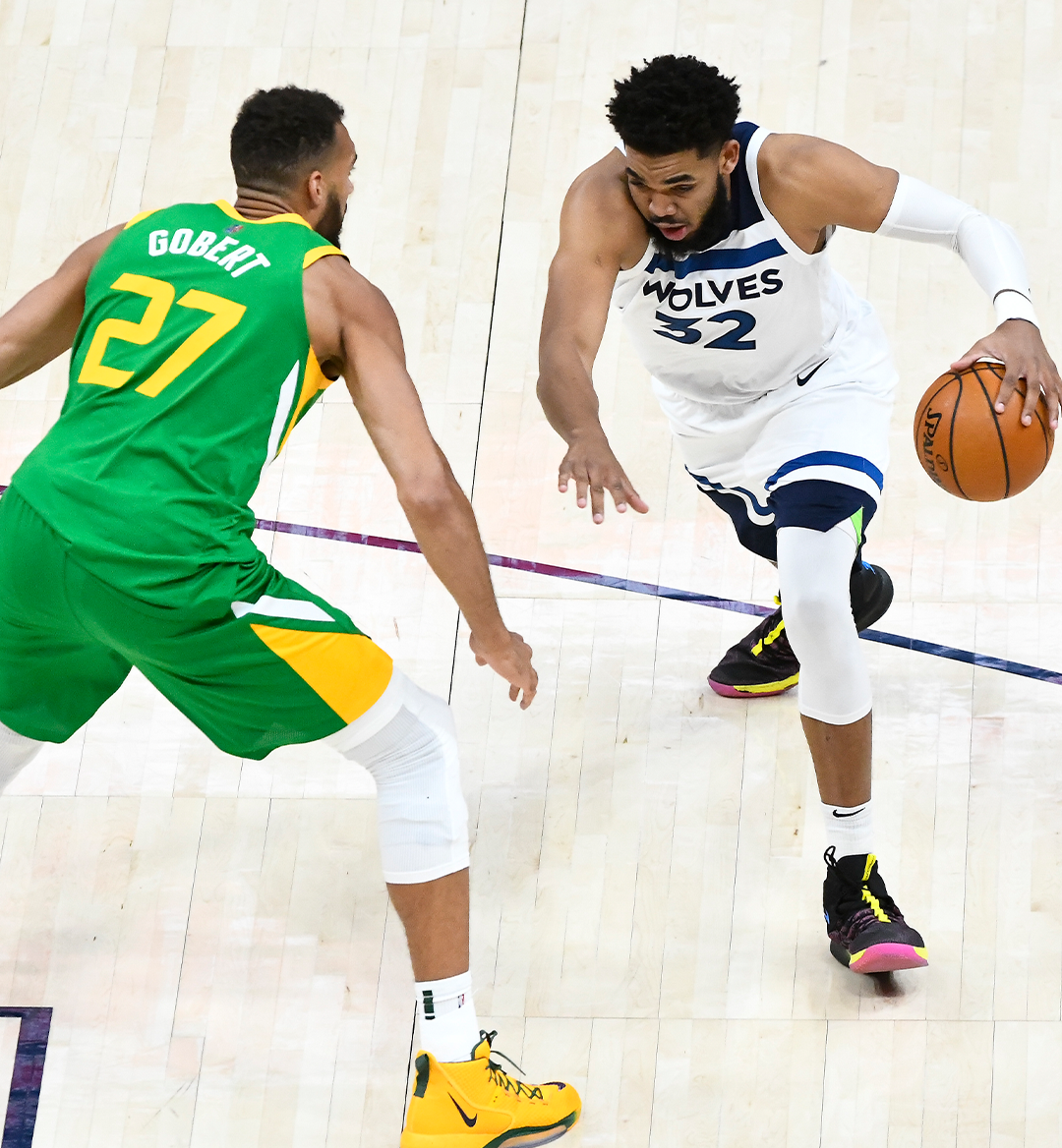 Laocoon came screaming down from the temple, the priest begging his fellow Trojans to burn the mysterious gift horse that they were looking in the mouth. Something very strange is happening, very strange. He was mocked, ignored and then eaten by snakes; his pain—and prophecy—immortalized as public spectacle. 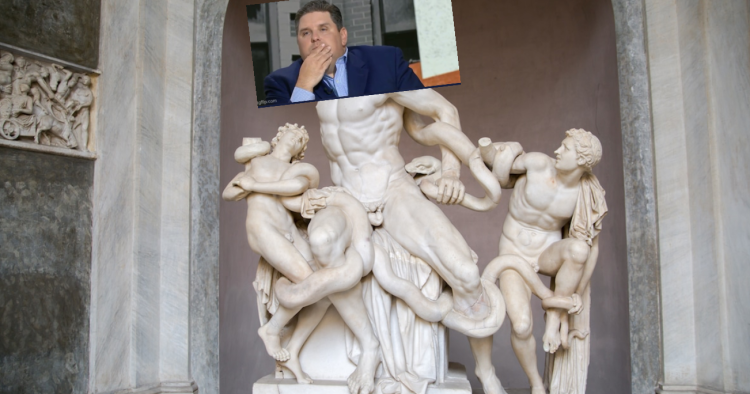 And so the Utah Jazz, with the eyes of Brian Windhorst and the rest of the NBA world upon them, traded Rudy Gobert to the Minnesota Timberwolves, kickstarting a rebuild—or maybe rejiggering—of a kinda-stale kinda-contender. Since the start of free agency last Thursday, the Jazz have entered the deal zone twice, swapping two long-time starters for six-ish first round picks. But while all the dot connecting and Pepe Silvia-ing has been focused on the Jazz, Minnesota is now actually the NBA’s most interesting team. Having emptied their cache of draft picks to pair Gobert with fellow All-Star center Karl-Anthony Towns, the Timberwolves are placing a big bet on Large Ball.

Way back in 2015, the Golden State Warriors upended the NBA and basketball at large by playing their five best players, regardless of said players’ size. Installing Draymond Green and Andre Iguodala as the nominal bigs in their vaunted “Death Lineup,” the Warriors boat-raced the rest of the league and birthed a dynasty. Here was a brave new world where center was less of a position than a frame of mind; if the 6 '6 Draymond Green could be a credible five, similarly proportioned guys like PJ Tucker or PJ Washington or Robert Covington or Jeff Green or Marcus Morris could too. As such, skill took precedence over size and yadda yadda yadda—if you’re still with me, you know this all already.

Lost in all the eulogizing of big men, though, a counter-revolution has formed: the rise of Large Ball. Paradoxically, the birth of Large Ball is the result of small ball’s undeniable success—teams targeted a certain kind of lubberly big so precisely and effectively that it excised them almost entirely from the NBA. Now, though, small-ball represents a solution to a problem that no longer exists; the motivating force for its creation (to attack Jahlil Okafor-types) has evaporated now that there are barely any Jahlil Okafor-types left to attack.

Instead, all that shooting and skill has trickled up into tomorrow’s—and increasingly today’s—crop of big men. For evidence, just check last month’s NBA Draft; the top four picks were all power forwards with perimeter chops. Similarly, the Milwaukee Bucks and Los Angeles Lakers buffaloed their way to titles in 2021 and 2020 respectively by being massiver than any team they faced.

Alongside low-waisted pants and Oakleys and Brittney Spears, towering frontcourts are yet another naugthy aughties mainstay that’s come back in style—the Boston Celtics snapped out of their early-season funk once they turned Robert Williams loose on the rest of the league; the Memphis Grizzlies won 21 of their 27 games without Ja Morant in large part due to their big man depth; the resurgent Cleveland Cavaliers went 26-14 when Jarrett Allen and Evan Mobley played together. Now is the NBA’s age of monsters, a place where unicorns are bred like thoroughbred stallions.

Or at least that’s what Minnesota is hoping for. Anchored by Towns and Gobert, the Timberwolves are suddenly the biggest and spookiest team in the league. The average wingspan of their projected starting lineup of D’Angelo Russell, Anthony Edwards, Jaden McDaniels, Towns and Gobert is over seven-feet long.

Crucially, the addition of Gobert should fortify a defense that was undone by their downy rim protection last season. While last year’s Timberwolves had to rely on a frantic scheme to compensate for Towns’ interior shortcomings, Gobert is the most dominant defensive player of the last 20 years. During Utah’s recent postseason crap outs, Gobert has earned an unfair and counterfactual reputation as a bootless drop coverage merchant who annually gets unmasked as a fraud like a Scooby Doo bad guy in the postseason. With the Timberwolves, though, Gobert will be fully unleashed, supplementing his usual shot-blocking with shifts as the low-man or blitzing pick-and-roll ball-handlers as Minnesota is wont to do. Playing alongside another center in Towns and another defensive genius in McDaniels, Gobert can be a proactive destroyer rather than a reactive crisis manager.

If his permissive rim protection is what makes trading for Gobert necessary, Towns’ scoring is what makes Minnesota’s new elephantine set-up feasible. The best big man shooter of all time, Towns grants Minnesota the spacing to absorb Gobert without sacrificing any oomph. Beyond the fact that he doesn’t miss jump shots, Towns is the rare big who can attack closeouts and get frisky off the dribble. Cherry-pick the right stats and Towns is as flawless an offensive center as there has ever been. Last year, Towns was a better three-point shooter than Kevin Durant, a more prolific driver than Lebron James, a more efficient isolation scorer than Devin Booker, and a better roll-man than Bam Adebayo.

Averaging 23.9 points on 64 percent True Shooting, Towns is a purely additive offensive presence. Although he lacks that certain physical charisma to be Him, he’s amongst the best at headlining a cast of thems. He does nearly everything and excels at nearly everything despite handling the ball less than Patrick Beverley; this is how he can accommodate a pick-and-roll specialist like D’Angelo Russell and a bucketeer like Anthony Edwards.

And yet, the Towns-Gobert partnership isn’t necessarily the most natural on-court pairing, even divorced from the team-building implications of trading away three unprotected future first round picks (and then another very lightly protected one for good measure). Defensively, it’s hard to imagine Towns and Gobert vacuum-sealing the paint because Towns just isn’t that level of a defender—in fact, McDaniels will probably inherit the low-man/free-safety role that Robert Williams pioneered in Boston while Towns decamps to the worst player on the other team.

Offensively, neither of them truly necessitates opponents to match their size; the Clippers defanged Towns in the play-in game by guarding him with mobile big wings while Gobert famously struggles to punish mismatches. In this sense, the two of them don’t so much amplify each other’s strengths as much as they mitigate each other’s fatal flaw. Think: less peanut butter and jelly, more peanut butter and life-saving epi-pen.

Still, the Timberwolves are an undeniably better team now than they were last week; there’s a world where they muscle their way to 55 wins and a Western Conference Finals berth, if not a Finals one. Boxed in by the fact that no superstar would ever brave a midwestern winter by choice, Minnesota swung the most ambitious and ideologically outré trade in years. By doubling down on their gigantitude, the Timberwolves have ripped away their sheep’s clothing.