The Best WCW Wrestlers of All Time 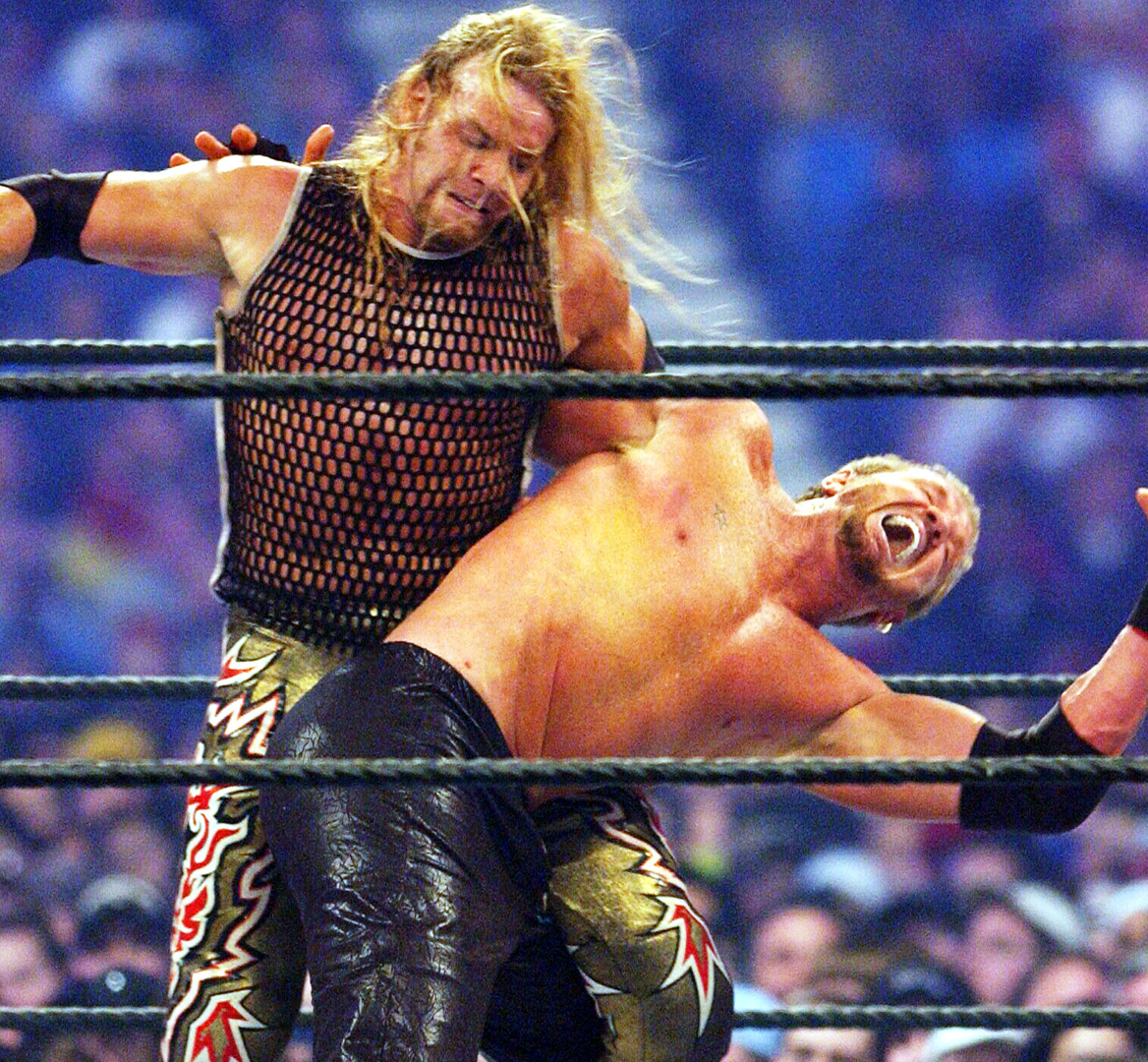 WCW was the underdog wrestling league that gave the WWE a run for its money during the ‘90s, up until the early 2000s when they were finally bought out by the WWE. Today, it seems like history is repeating itself with the emergence of All Elite Wrestling (AEW) which was able to lure some talent away from the WWE similar to how WCW did in years past. Some wrestlers shined more at WCW, but they also brought a lot of new talent to pro wrestling. Here is a list of the wrestlers that cemented their iconic careers in WCW. 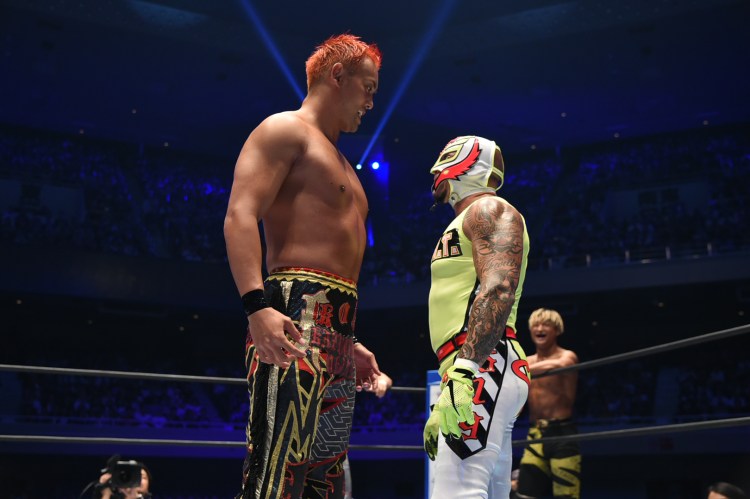 When Rey Mysterio Jr came on the scene at WCW, his high energy, and high flying moves helped the Lucha Libre style of wrestling from Mexico gain a following in a world of big men. The former cruiserweight champion was a “must-see” wrestler. Mysterio was able to crossover and bring his talents to the WWE when WCW’s time was over. But it goes without saying, his most legendary matches from WCW are still worth watching today. 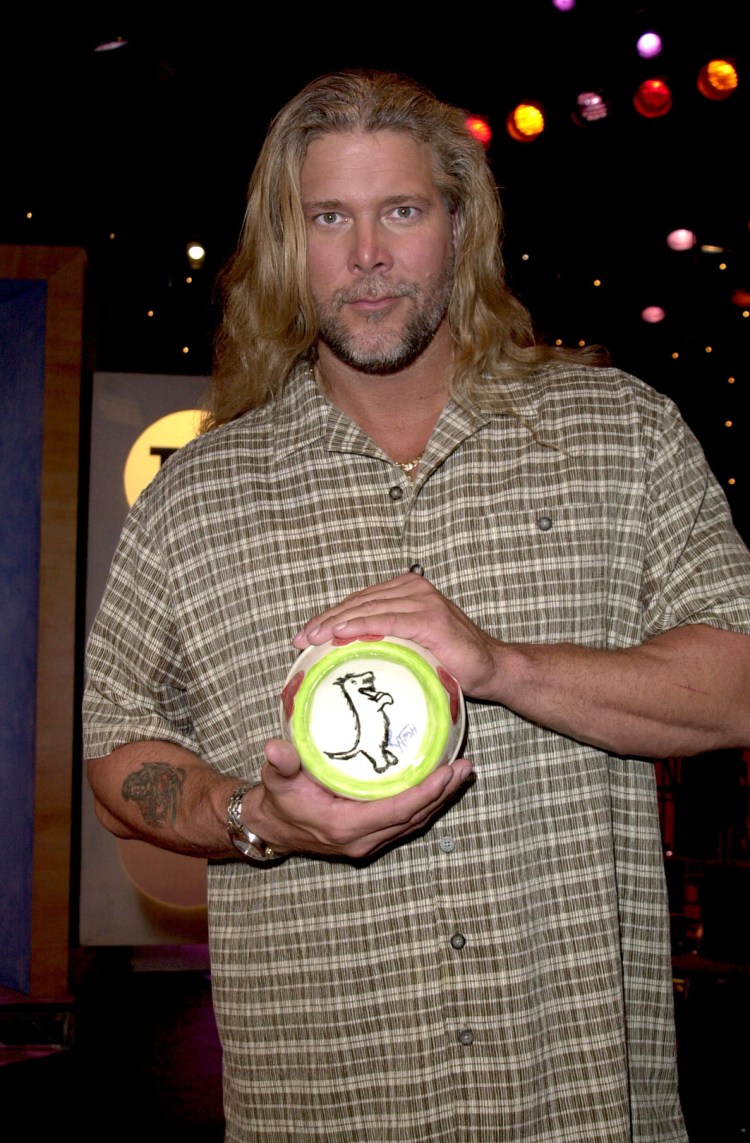 Kevin Nash is one of the founding members of the New World Order aka NWO. The NWO was one of the most influential WCW groups of all time. They became a pro wrestling staple that represented something much bigger than any sanctioned promotion. Nash was known as “Diesel” over at the WWE, but he truly broke out when he went back to WCW as an original face of one of the most infamous characters from the WCW era.

A lot of great pro wrestlers in the WCW came in from the National Wrestling Alliance and Lex Luger was one of them. He had a massive frame and a finishing move known as “The Torture Rack,” which was just an excuse to lift another wrestler over his head. Luger was one of WCW’s triple crown champions, meaning he won several of the promotion’s titles (heavyweight, tag-team, and United States champion). 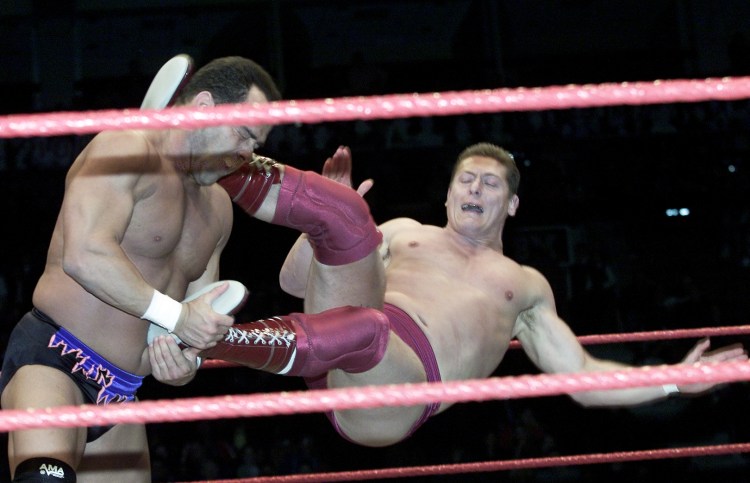 Known as “The Man of a Thousand Holds” Malenko wrestled in Extreme Championship Wrestling aka ECW and New Japan Pro wrestling. Despite these tenures, some of his most exciting matches occured in the WCW. His matches with Rey Mysterio, in particular, are worth rewatching today. He currently serves as a coach and senior producer for AEW according to Wrestling Observer.

One of the many face painted wrestlers from the ‘90s, Vampiro was silent because he did all his talking in the wrestling ring. His Lucha Libre style was unique because he weighed 250 pounds, but moved like a cruiserweight. He held the tag team title with The Great Muta and also joined Sting as “brothers in paint” since their facial paint used the same black and white color scheme.

The moniker "La Parka '' has been used by a few luchadors but the one that makes this list is Adolfo Margarito Tapia Ibarra. Ibarra, like many wrestlers in the glory years of WCW, came from another promotion. La Parka—like many luchadors—helped keep eyes on WCW's cruiserweight division where fast-paced wrestling mattered more than any storyline. 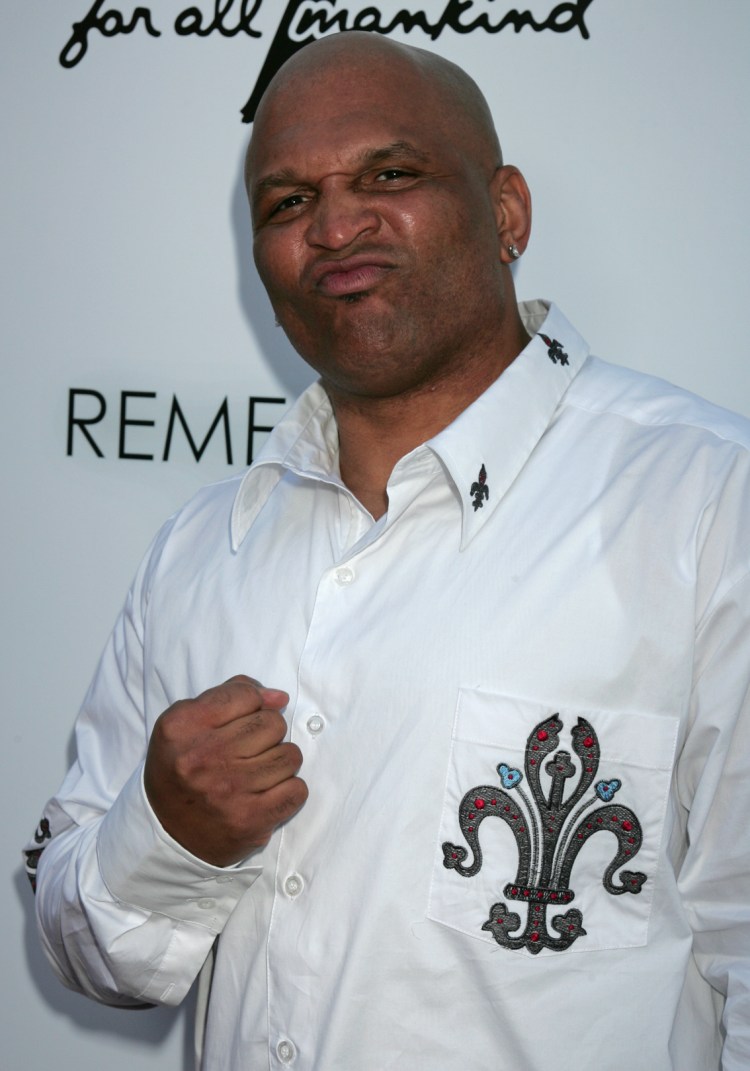 Miller was one of many wrestlers who was also a trained martial artist. Casual onlookers are always quick to dismiss pro wrestling as “fake” because of the predetermined outcome of matches. But, there is still training and athleticism involved with professional wrestling. Miller was a kickboxing champion and karate tournament competitor so taking bumps came easy to him. It helps that he was a karate instructor to the son of WCW President Eric Bischoff. 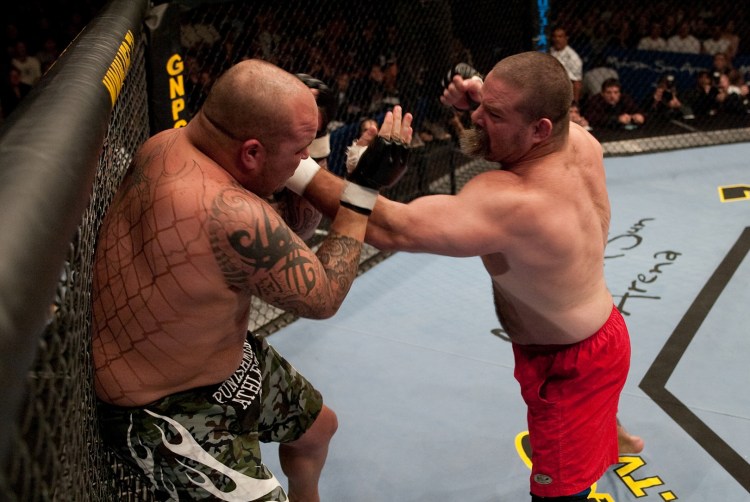 The line is thin between mixed martial arts and professional wrestling. Many fighters have gone back and forth between both sports but for WCW, the most notable name would be Tank Abbott. Abbott was a heavy-handed knockout artist from the early days of the UFC and somehow, his knock out power got Incorporated into his pro wrestling persona. Towards the end of his WCW tenure, he was associated with the boy band stable "3 Count".

WCW grew a lot of their own talent when they were at their peak at the WCW Power Plant. O'Haire was one of the wrestlers to come out of there but he was also an accomplished kickboxer and went on to compete in mixed martial arts. Sadly, O’Haire took his own life in 2014. 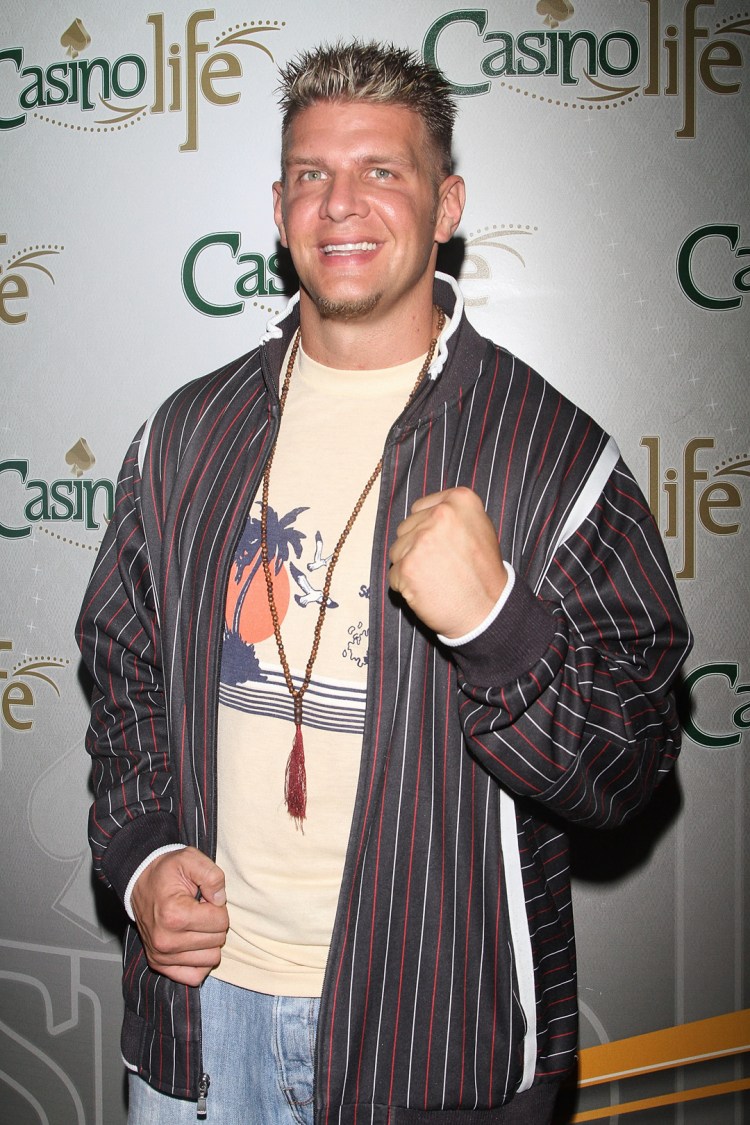 Jindrak was tag-team partners with O’Haire the duo was another product of WCW’s Power Plant. JIndrak trained under Mr. Wonderful himself, Paul Orndorff and along with O’Haire formed the pro-wrestling team known as the “Natural Born Killers”. He and O’Haire won a WCW tag-team title before WCW folded. 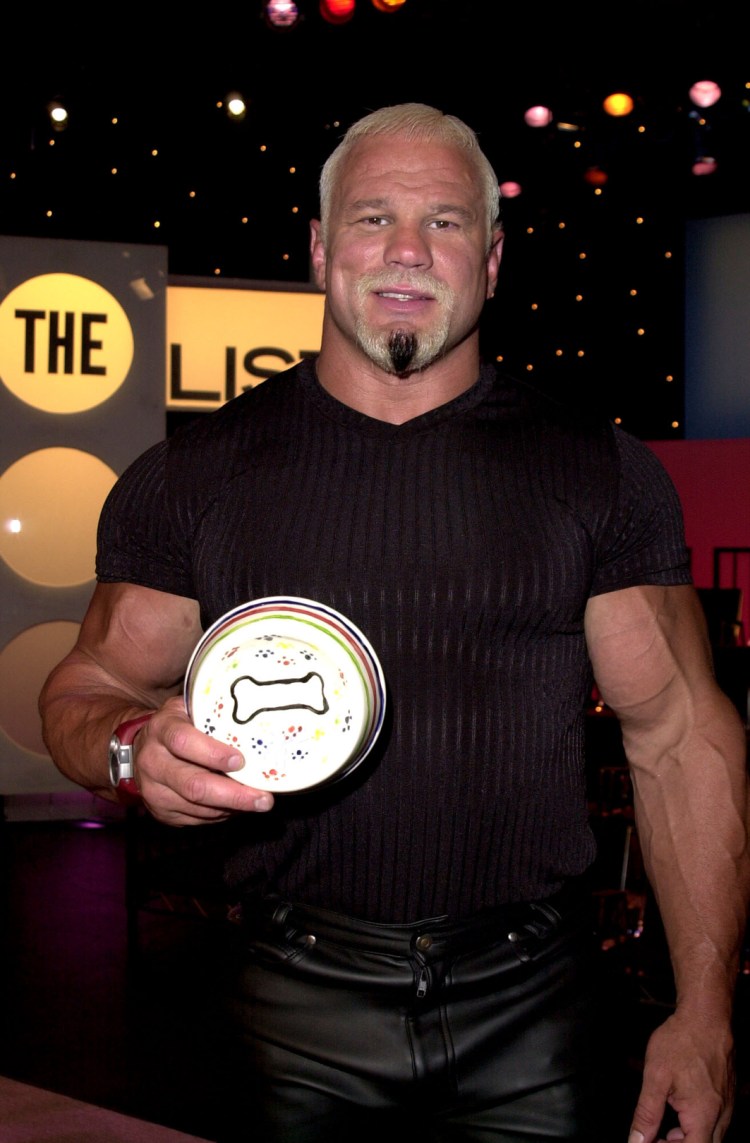 It’s hard to talk about any of the Steiner brothers without mentioning both, together. However, even though Scott and his brother Rick began as a tag-team, Scott would go out on his own and evolve into the man known as “Big Poppa Pump”. Big Poppa would win the WCW World Heavyweight title and before that held tag team titles with his brother.

Of course, Rick Steiner deserves a mention on this list. Rick and his brother were both accomplished amateur wrestlers at The University of Michigan and it was something Rick and Scott brought into their pro-wrestling personas, too. Scott did away with it, but Rick would take it through WCW, equipped with ear guards and his University of Michigan varsity jacket. 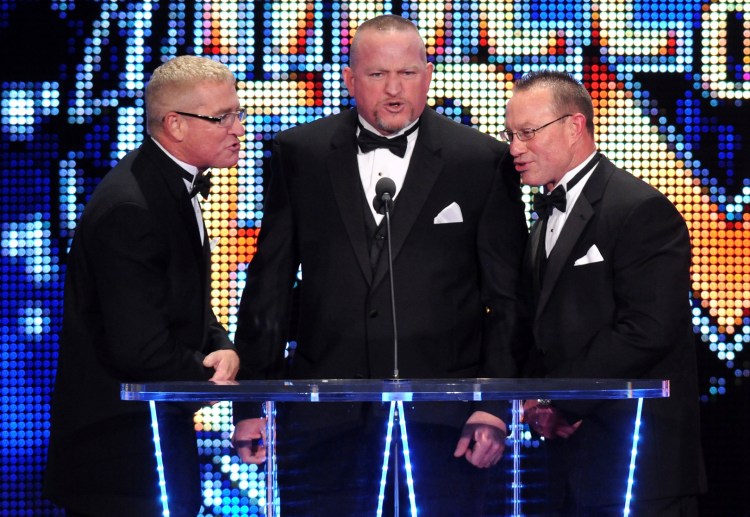 In WWE he was known as Razor Ramon, but Scott Hall along with Kevin Nash were known as “The Outsiders”. The duo would help form the nWo, the professional wrestling group that would look to take over WCW and gather a few notable wrestlers under its wing. Hall was probably one of the longest-running heels during his time in wrestling. 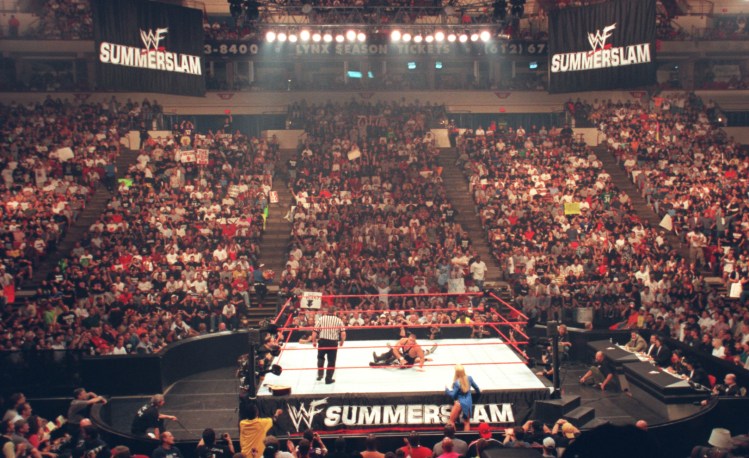 DïLo Brown and Jeff Jarrett battle it out during SummerSlam, 1999. / MARLIN LEVISON/Star Tribune via Getty Images

Jeff Jarret carried a guitar around the ring with him for the sole purpose of cracking it over another wrestler's head in WCW. He coined the term “slap-nuts” in his trash talk and was a multiple-time WCW champion. In one single night, a feud with WCW commissioner Terry Funk would have Jarrett take on three matches against George “The Animal” Steele, Tito Santana, and Jimmy Snuka. 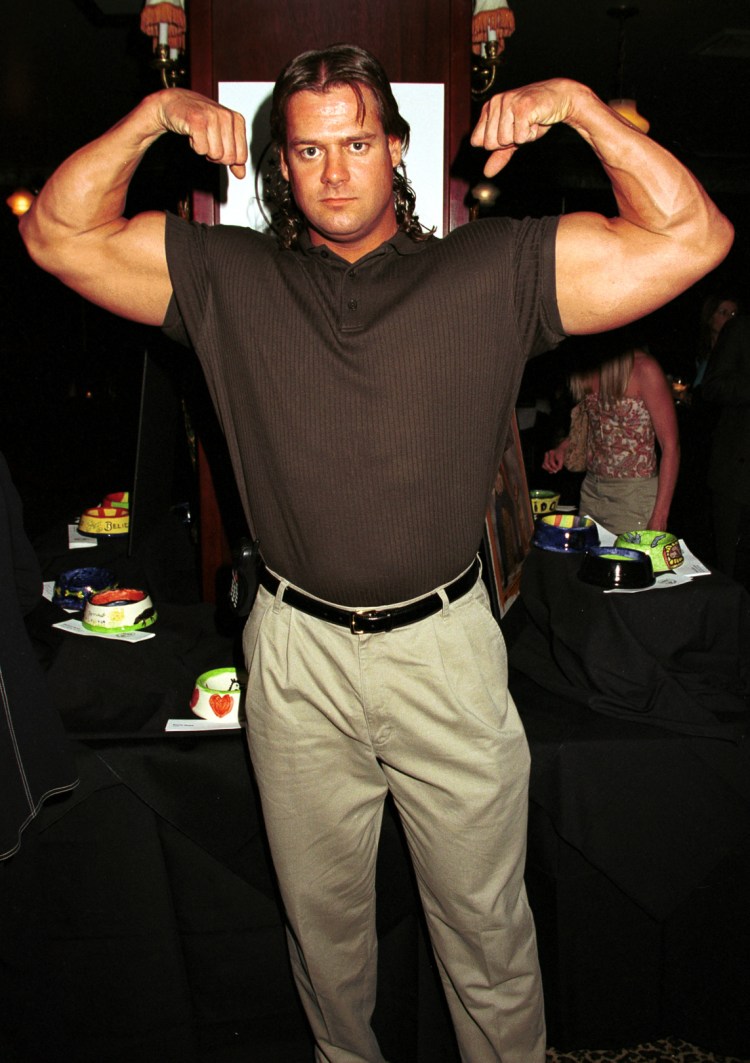 Mike Awesome went through a lot of attempts at changing his persona during his time with WCW. From trying out a 70’s theme and even to the “Canadian Career Killer”. Awesome’s biggest claim to fame was coming into the promotion, while still being the ECW champion on an episode of Monday Nitro. 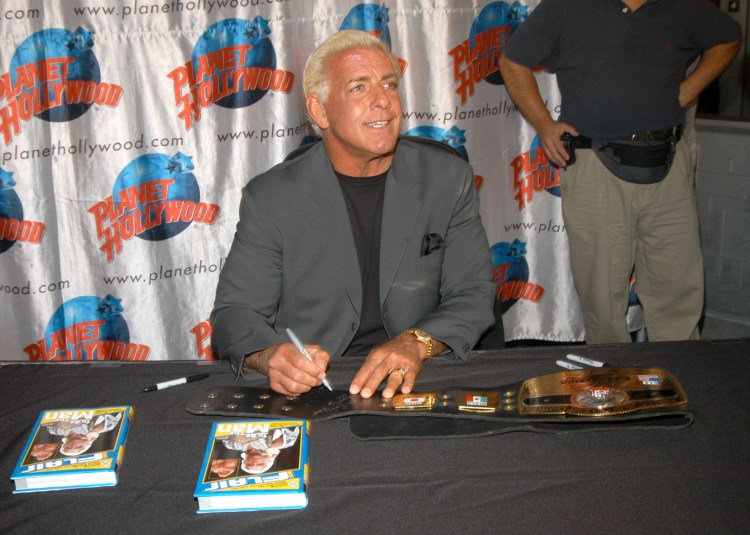 Flair has wrestled everywhere. “The Nature Boy” feuded with many wrestlers on this list and of course, was a multiple-time WCW champion and President at one point. For WCW, his matches with Lex Luger and Sting at Starrcade in 1995 was probably the height of his WCW career. But for Flair, that is only one of many highs in the scope of his pro-wrestling career. 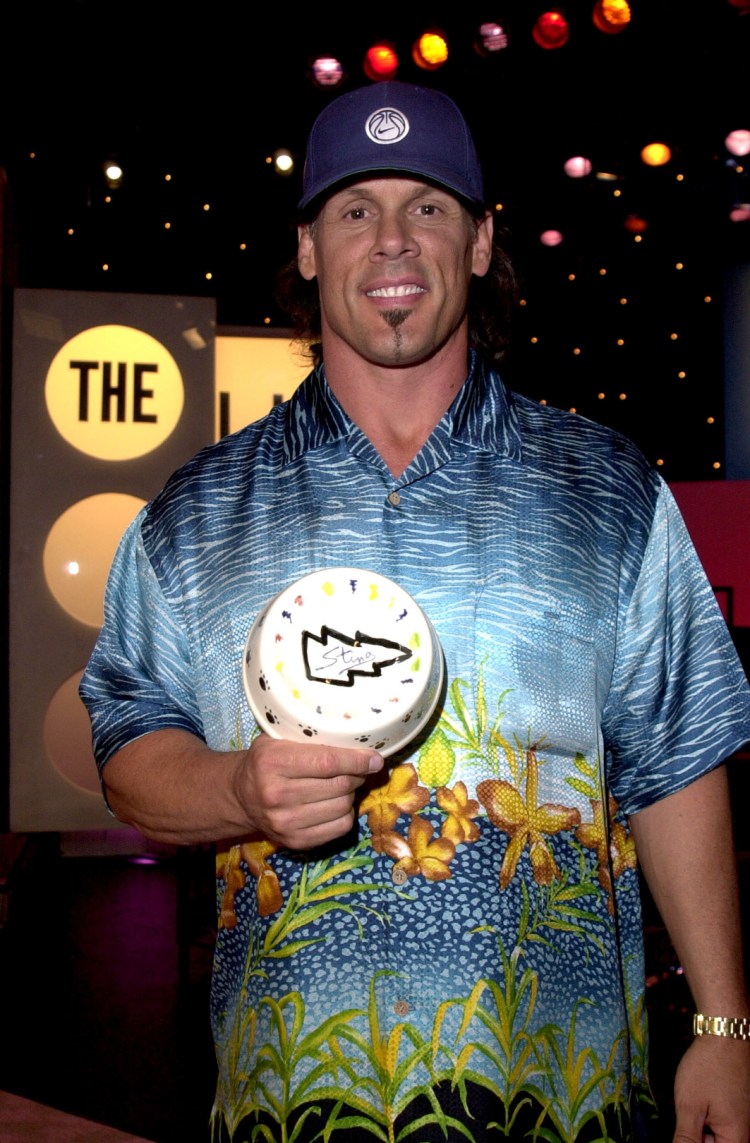 Sting probably shares the most active and competitive ring time with Ric Flair and owns “the dirtiest player in the game” title. Ric Flair brought Sting over during his rise, but Sting brought something new when he came up from NWA, then WCW. The black and white face paint was very symbolic and memorable part of his persona.

Douglas was part of a stable in WCW that included Jindrak, O’Haire, Mysterio, and few others on this list known as “The New Blood”. This would make for many rivalries in WCW, some real and some fake but kept up with the theme of putting the newer wrestlers over. 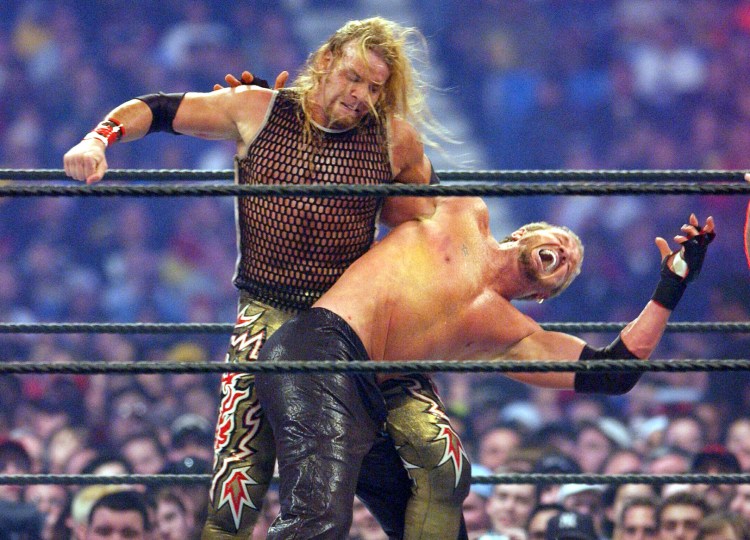 Page, or DDP for short made a name for himself in WCW. His signature move, “The Diamond Cutter” could seemingly be done from any position in the ring. He would win a WCW tag team title along with Kevin Nash, and a WCW World Heavyweight champ title too. More recently DDP has become a yoga guru and has helped others get fit through his DDP Yoga program.

Konnan was one of many of the Mexican-American wrestlers that had success in WCW. At the height of WCW, Konnan switched to a cholo-themed, west-coast gangster persona and was part of a nWo sub-group known as “The Wolfpac” lead by Kevin Nash. He is credited with helping get Rey Mysterio on La Parka on the WCW roster. 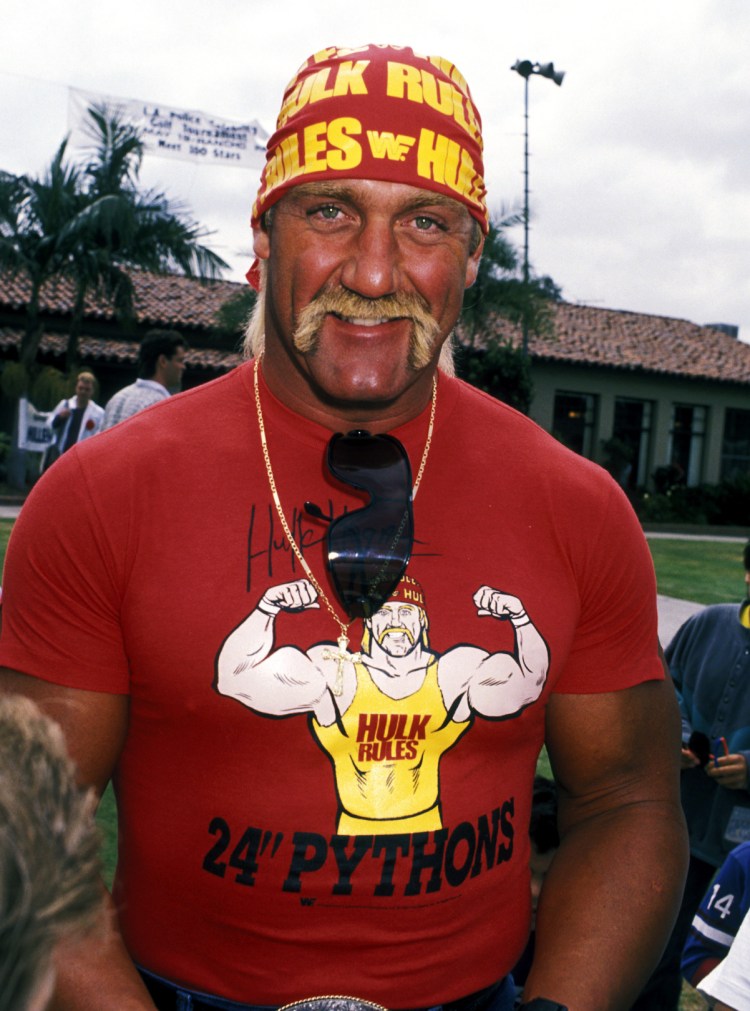 Another icon in pro-wrestling, Hogan has always been associated with being one of the good guys. However, when he came to WCW, he traded the yellow and red colors for nWo black and white and became, “Hollywood” Hulk Hogan. His 2000 “Bash at the Beach” feud with Vince Russo is one of WCW’s most controversial moments.

David Flair, the son of Ric Flair, had a less than warm welcome when he made his WCW debut. The nWo ganged up on him and Hogan whipped him with his belt. He would eventually join “The New Blood” and wrestle his father in a retirement match, for a retirement that obviously did not stick.

Barry Windham was a tag team wrestler, usually with his brother, Kendall and was brought back to WCW by Eric Bischoff, along with Curt Hennig. He had a short-lived gimmick in a stable called “The West Texas Rednecks” that did not last. Windham ended his WCW run along with his brother in a match against the Harlem Heat.

The mask Big Van Vader wore for his ring entrances made him a fan favorite. It covered his upper body and would blow steam when he entered the ring. Like his name implies, Vader was big but he was able to move just as good as any other wrestler, delivering a moonsault as one of his finishers using his 400-pound frame.

A multiple-time tag-team champion and cruiserweight champion in WCW, Billy Kidman was one of the high flying wrestlers of WCW that was must-see. He wore denim shorts before John Cena made them cool and accented the outfit with a white tank top. When he performed his finishing move, the shooting star press, it usually meant a win for Kidman. 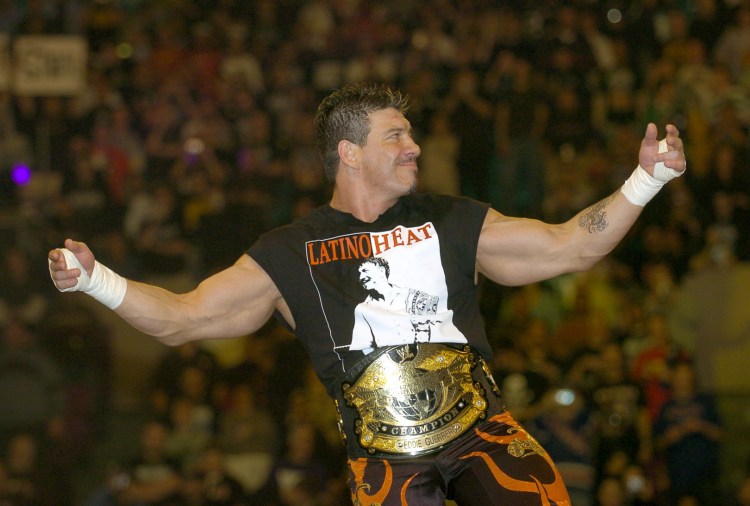 Guerrero’s family has been involved in pro-wrestling for generations. But in the WCW, Guerrero wrestled the likes of Konnan and Ric Flair cementing his own name in the industry. He was a two-time WCW cruiserweight champion and one-time heavyweight champion. He would lead an off-shoot of the nWo called “The Latino World Order”(LWO) to push other Mexican wrestlers in WCW. 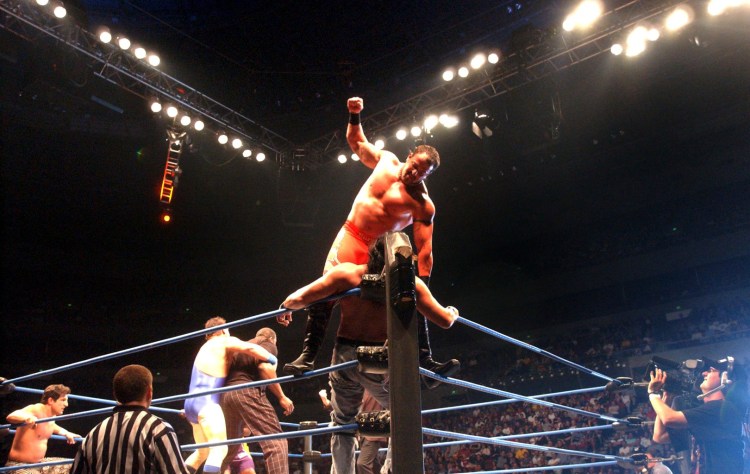 During the days of Nitro and Thunder (WCW’s Thursday night program) Bagwell wrestled as part of nWo. He then became part of The New Blood and was involved in feuds with David Flair and Goldberg. He would win five tag team titles during his time in WCW. 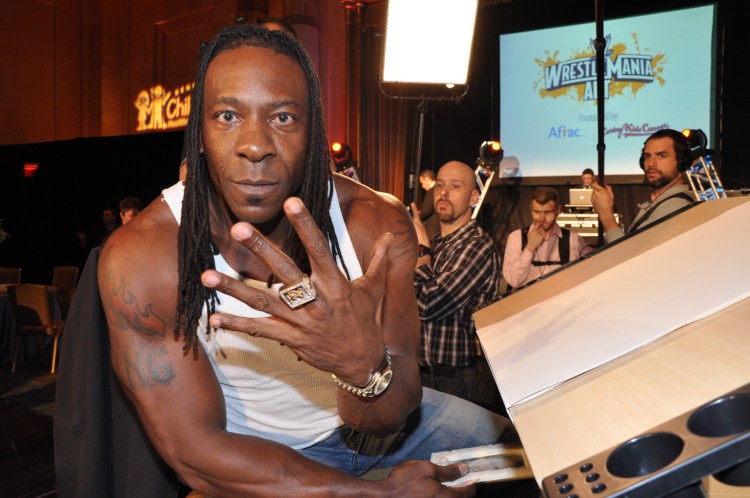 Booker T was partnered with Stevie Ray in the tag team known as the “Harlem Heat”. When he transitioned to singles matches he would go on to win WCW titles multiple times. After winning the championship five times, Booker-T did his signature “spinarooni” move, except now he would hold up five fingers representing his many title wins.

Known for his long hair, baby-face, and high flying moves, Guerrera was a WCW cruiserweight, a title he won on WCW’s debut of Thunder. Like many Mexican wrestlers with a luchador style, he wore a mask. He was unmasked by Chris Jericho at Superbrawl, and kept wrestling without one long after. 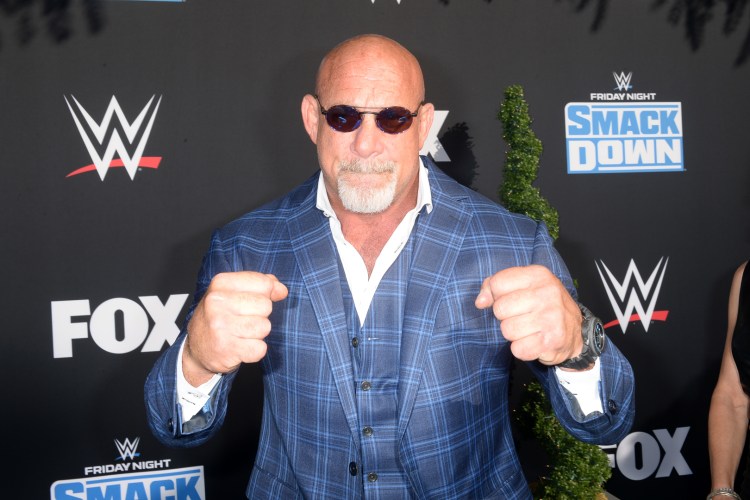 Goldberg is probably the most popular wrestler who began with the WCW and stuck it out until the buy out from the WWE. He’s a Power Plant trained, naturally athletic entertainer. Mostly strengthened by his days in the NFL, and training in MMA. Goldberg always had a lot to build on. His WCW persona can be compared to what Mike Tyson did for boxing. Goldberg was known for finishing matches quickly and racking up wins. All of which helped him develop the catchphrase, “Who’s next?”.