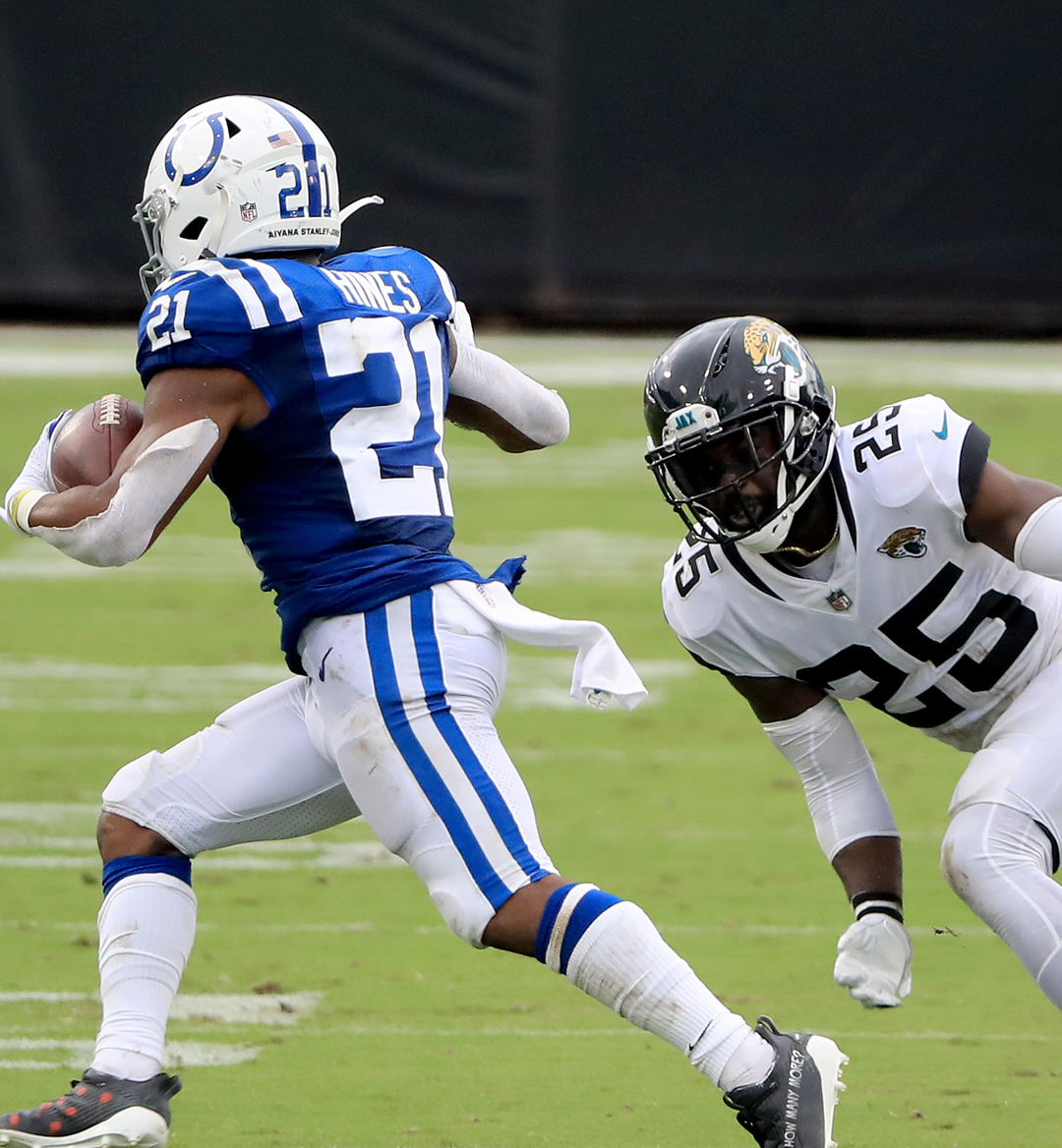 UPNXT is a new weekly article series where the worlds of trading cards and fantasy sports collide. Our goal is to help you make more informed decisions on trading cards, daily fantasy sports, and season-long fantasy leagues. Join us as we discover the sports stars of tomorrow, today.

THE NFL IS BACK! And what a fantastic feeling it is to say that! Now that there’s pumpkin spice everything, everywhere, this is undoubtedly my most favorite time of the year. Not only do we get the NFL three days a week, but we’re also approaching the NBA Finals, the NHL Stanley Cup Finals, WNBA playoffs, MLB postseason, proper football leagues playing around the clock, weekly UFC events, and more!

With the first week of the NFL season officially in the books, we finally have some concrete data to build off. I noticed some definite rust being knocked off in week one, but without any preseason games being played, I expected there would be a bumpy first couple of games. As players and coaches continue to work out the kinks, we should get a much better picture of snap count, touches, and general workload for each team going forward.

With that being said, let's jump into who's "UPNXT" for week two. Also, if you're curious to see how week one went, stick around for the recap at the end! 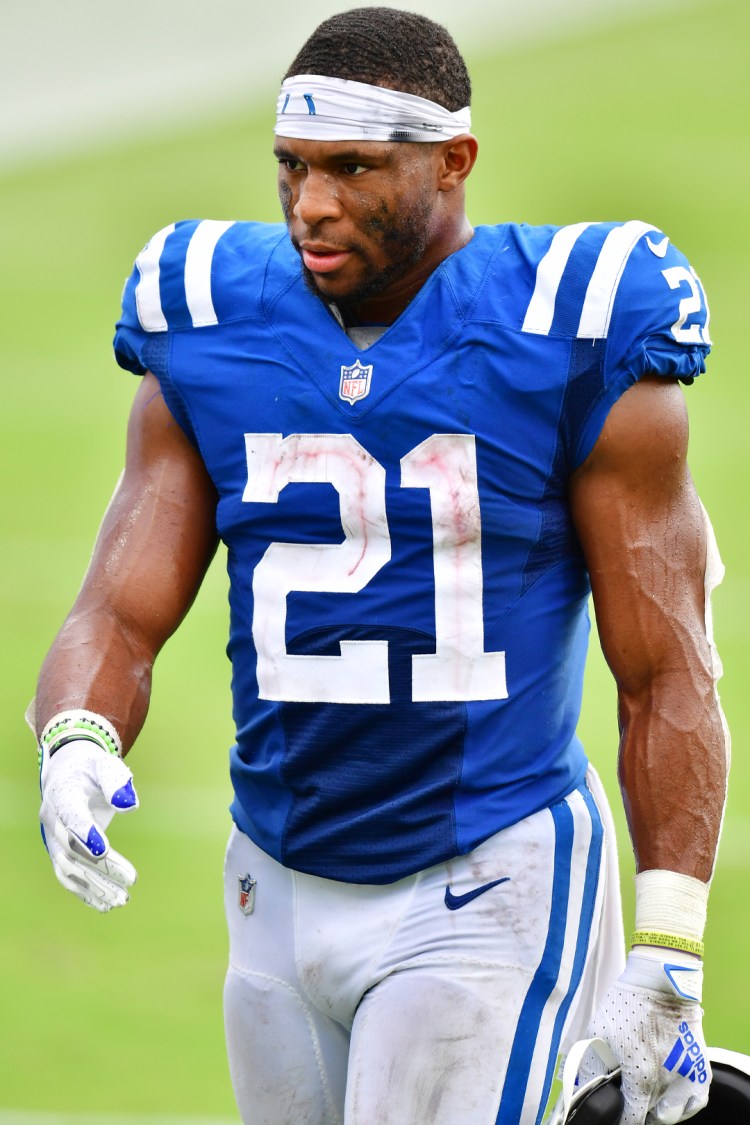 You hate to see a player go down with a serious injury in any sport. Unfortunately for the Colts’ RB Marlon Mack, his season came to an end last week after suffering a torn Achilles against Jacksonville. Many league managers likely drafted Colts’ rookie Jonathan Taylor (96% owned) in middle rounds of their fantasy draft, but it was Nyheim Hines who dazzled in place of Mack on Sunday. Hines chipped in 15 touches for 73 yards and two touchdowns. Expect a timeshare at running back with Taylor likely leading the way, and Hines being used more in obvious passing situations.

DFS: (DraftKings: $5,300, FanDuel: $5,500) vs. Vikings: While it’s unclear how this backfield committee will look with Mack out, Nyheim Hines makes for an enticing GPP play this week. Facing the Vikings, who gave up 522 yards of total offense to the Packers, Hines’ usage should give him a shot at another strong outing. Hines is already looking like a favorite target of Philip Rivers, who loves to utilize his running backs in the passing game. I especially like Hines on DraftKings, thanks to the price discount and full point per reception scoring. With an implied total of 47.5 and a tight spread, I don’t mind having some shares of Hines in tournaments.

Fantasy Ownership: Hines’ ownership currently sits at just 34%, making him my top waiver wire addition this week at a thin running back position. As is the case in DFS, he is more valuable in PPR scoring leagues, and should be at least RB3/FLEX worthy going forward.

Hines has seen a significant jump in the value of his rookie cards with his 2018 Panini Prizm doubling overnight. This would seem to be an overreaction, as Taylor would be the running back I would be investing in long-term, considering the Colts just invested a second-round pick on him.

Rating: Sell. It feels like it’s only a matter of time before Taylor is the clear #1 running back in Indianapolis, and when that happens, Hines’ value will shoot back down. 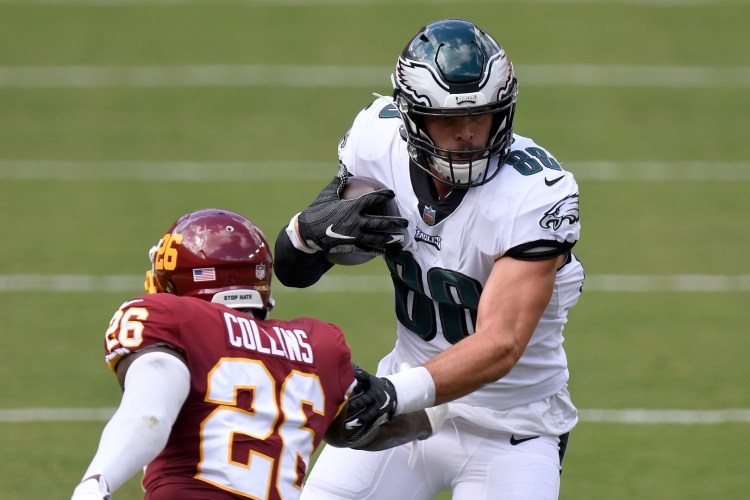 Whispers are steadily growing louder that Dallas Goedert may eventually replace Zach Ertz as the starting tight end in Philly. After another impressive performance in which Goedert outplayed Ertz, who can blame the Eagles for considering moving on from Ertz? All Goedert did Sunday was lead the team in targets, receptions, yards, and tied with Ertz for touchdowns, with one each. It’s no secret that QB Carson Wentz loves targeting his TEs, which makes Dallas Goedert a must-add for owners in need of a quality starter at the position.

DFS: (DraftKings: $5,000, FanDuel: $5,500) vs. Rams: Philadelphia showed an inability to consistently protect Carson Wentz last week. Things don’t get much easier for them against the Aaron Donald led Rams defense. With Donald creating havoc in the trenches, and top cover corner Jalen Ramsey locking down the secondary, I see Wentz trying to get the ball out quickly in this game. I won’t be surprised if Goedert and/or Ertz are the main beneficiaries once again. The Rams did a good job slowing down a potent Cowboys offense, but they will face a different kind of test with Goedert and Ertz. Consider Goedert as a contrarian GPP play.

Fantasy Ownership: Tight end is a position that can give you an edge over your opponent in fantasy football. If you get a good one, it’s like having another WR1 on your team. Goedert is currently just 27% owned in fantasy leagues. He has shown consistent top 10, and even top 5 potential in the past. I don’t usually suggest rostering two tight ends, but in this case, I’m more than happy to make an exception.

Goedert has seen no uptick in the card market, as his 2018 Prizm rookie sold for $1.99 24 hours after his big game. If he strings another couple of performances together like the one he had against the Redskins, and collectors start buying in to the idea that he could supplant Ertz as the Eagles #1 tight end, his value will absolutely rise. 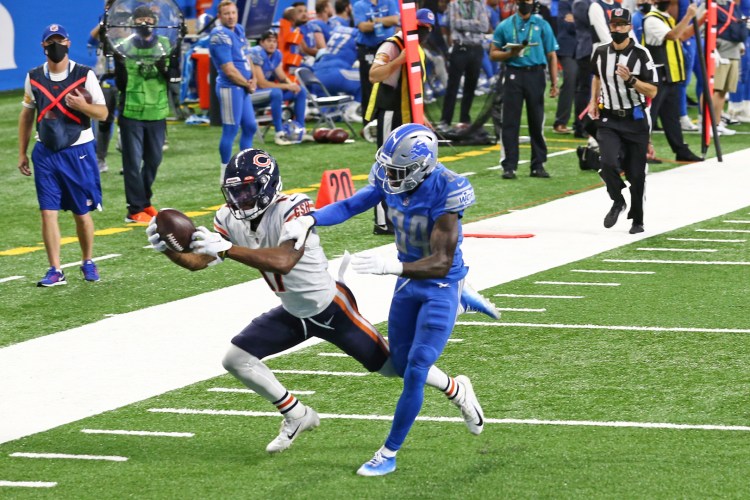 At first, it looked as if Bears’ Head Coach Matt Nagy made a mistake in naming Mitchell Trubisky the starting quarterback over former Super Bowl MVP Nick Foles. Then, like the enraged bear that attacked Leo in The Revenant, Trubisky came out of nowhere and mauled the Lions’ defense in the fourth quarter.

Anthony Miller was the recipient of the go-ahead touchdown that sealed the comeback victory for the Bears. Miller finished second in targets with six, had the longest play from scrimmage of any Bears’ player, finished first in receiving yards, and tied for first in touchdown receptions with one. His role as the WR2 for Chicago is cemented, but shaky quarterback play is a definite concern.

DFS: (DraftKings: $5,200, FanDuel: $5,700): Miller faces a Giants’ secondary that isn’t going to cause the opposition to lose any sleep. Are they beatable? Absolutely. Does Miller have the talent to win vs. their DBs? Certainly. The only question is, will fourth quarter Trubisky show up for all four quarters in this game? If you’re a Trubisky truther, then I’d roll Anthony Miller out with confidence this week in both cash and GPP contests.

Fantasy Ownership: In deeper leagues, I don’t expect Miller to be available. In most fantasy drafts, he was being taken in the later rounds as a potential sleeper pick. Well, after his first game, I’d say he’s very much awake. He should be available for pickup in nearly 60% of leagues, and he’s my favorite waiver wire wide receiver this week. Try saying that three times fast!

Miller saw a slight rise in the value of his cards, as one of his silver Prizm rookies sold for $7 higher shortly after the game than it did back in July. If the 2018 2nd round draft pick out of Memphis becomes the #1 receiver in Chicago, his value will continue to rise. He did have 52 catches for 656 yards last season, and for a WR to take a big jump in year 3 is not unheard of. Don’t go crazy buying a ton of his cards though, as the quarterback situation in Chicago severely limits his upside. 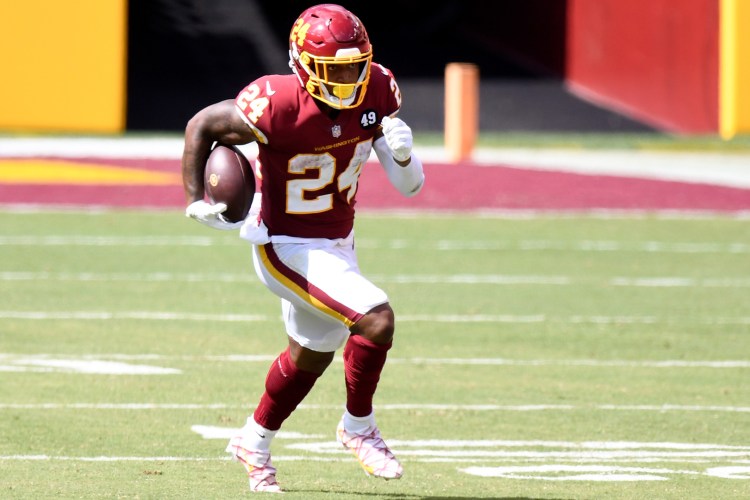 THE SCOOP: While Gibson hit our goal of 10-15 touches, it would’ve been nice to see him get some goal line work. The unexpected game script led to Washington leaning on Peyton Barber, who out-touched Gibson 17-11, while adding two touchdowns.

UPNXT: @ Cardinals. Arizona’s defense just allowed Raheem Mostert to turn 19 touches into 151 yards and a touchdown. Give Gibson another look as your RB3/FLEX, especially if Washington finds themselves playing from behind in this one. 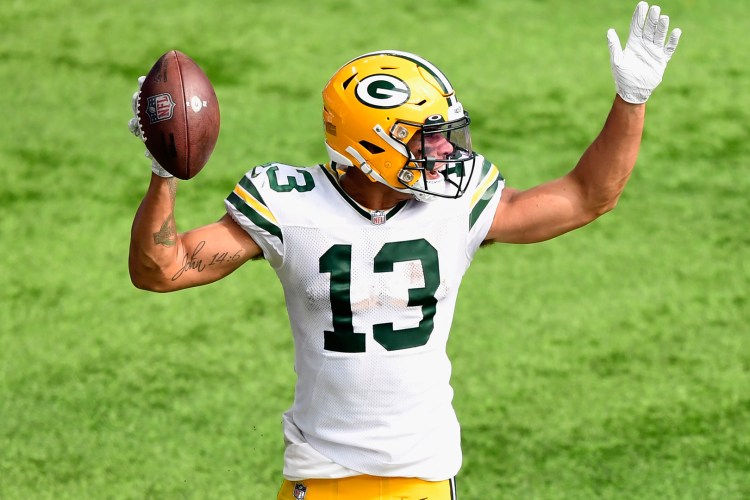 THE SCOOP: The Vikings’ secondary really is bad! While it was Davante Adams who feasted, Lazard still managed a solid day. His highlights include a 38-yard catch and a touchdown grab from four yards out, proving he is who we thought he was: a red-zone maven for Aaron Rodgers.

UPNXT: vs. Lions. If Mitch Trubisky can put up 242 yards and 3 touchdowns versus Detroit, just imagine what Rodgers and company can do. Start him with confidence this week as a WR3/4. 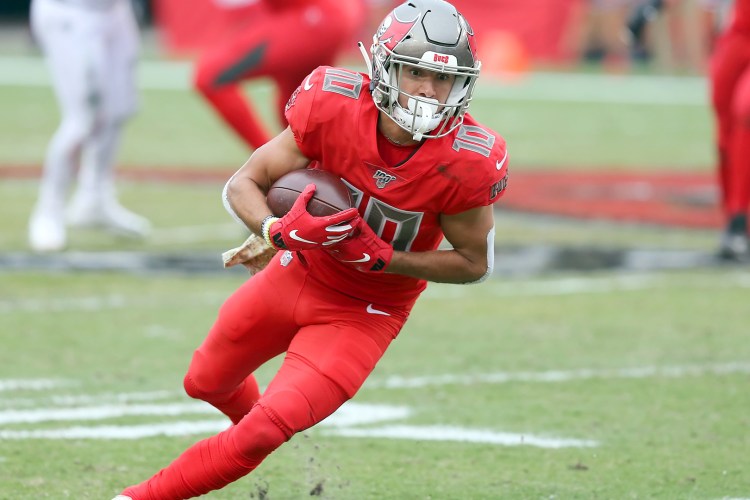 THE SCOOP: Despite Mike Evans being active, Miller finished second in targets with six. He had the longest play of the day for the Bucs, hauling in a 37-yard strike from Tom Brady. We like seeing Miller challenging for the team lead in targets, but I wonder if a healthier Evans cuts into that total.

UPNXT: vs. Panthers. Keep an eye on the health of Chris Godwin. Godwin looked like he suffered a head injury but walked off the field under his own power. Miller would be in line for even more targets versus a fantasy friendly Carolina defense. Start him as a WR3 if Godwin or Evans is out.