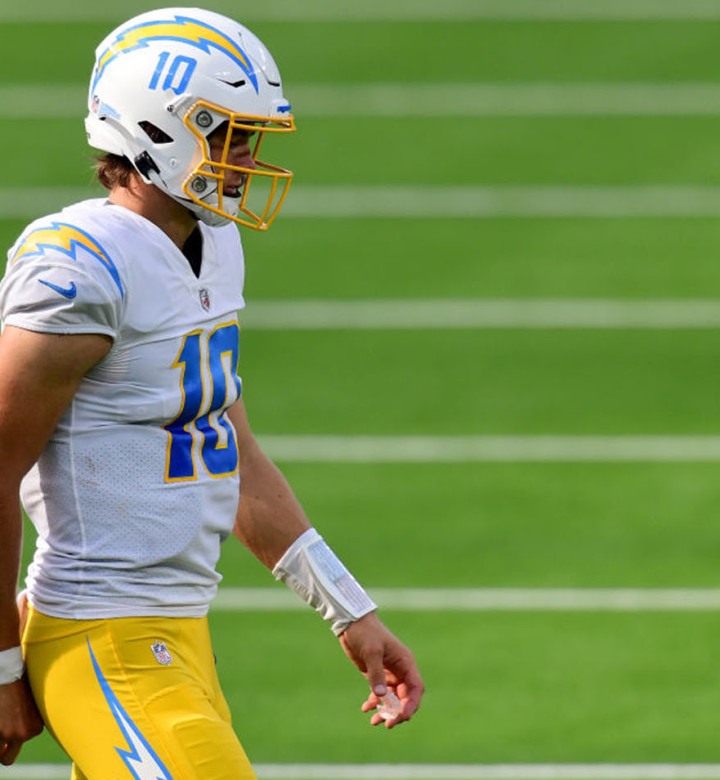 With the first quarter of the NFL regular season already behind us, we were reminded this week that we still have a long way to go before we are out of the woods regarding the Coronavirus pandemic. An outbreak within the Tennessee Titans organization led to their game versus the Pittsburgh Steelers being rescheduled, and another game, between the New England Patriots and Kansas City Chiefs, had to be pushed back to Monday night after Patriots star quarterback Cam Newton tested positive for COVID-19.

Unfortunately, the injury bug keeps biting, leading to holes on rosters that must be filled. Not only that, but the Green Bay Packers and Detroit Lions are both out of Week 5 thanks to their bye week, so there’s likely an even greater need for quality player additions to your fantasy football rosters.

But fear not, we have you covered! This week, we’ll deliver not just three, but FOUR names you need to know as we head into Week 5. We’re charged up to bring you who’s UPNXT this week!

BONUS: Hang around until the end for a quick recap of last week’s picks! 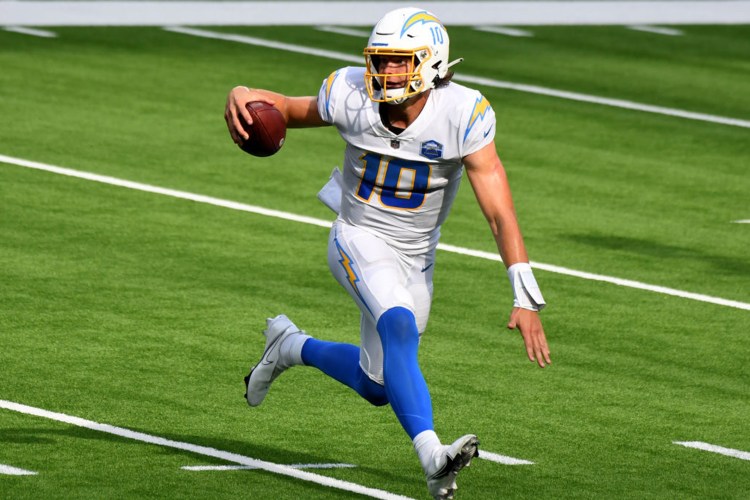 In just his third start, on the road, as a huge underdog, against “the GOAT” Tom Brady and the Tampa Bay Buccaneers, Justin Herbert flat out balled! A highly efficient 20 for 25 on passing attempts, 291 passing yards and three touchdowns, against a formidable Bucs defense, made us sit up and finally take notice of rookie Justin Herbert.

I hate to say this, because I like Tyrod Taylor, but I don’t see him getting his starting job back unless something unfortunate happens here. While Herbert did throw a costly interception late in the game, the stat line he put together Sunday was simply impressive, and he solidified himself as the Chargers’ present, and future, signal caller under center.

Fantasy Ownership: After three games, Herbert is averaging 310 yards per game, 1.6 passing touchdowns, and 15 rushing yards, making him a worthwhile pickup as a streaming option, or even as a low-end starter. Lucky for you, he is only 14% owned, but I expect people to finally catch on and snatch him up come Wednesday.

DFS: (DraftKings: $TBD, FanDuel: $TBD) @ Saints While we don’t have pricing available for Herbert yet due to him playing on Monday Night Football, we do know that we have an implied game total of 52, with the Chargers as a +8 underdog. The Saints are one of the most pass friendly defenses in the league so far, so Herbert shouldn’t have any issue reaching 300 yards and a couple of passing touchdowns once again. While I wouldn’t consider him a cash play, I think if his price is right, you could take him as a tournament option on a Sunday night/Monday night short slate, or a Monday night only showdown contest. 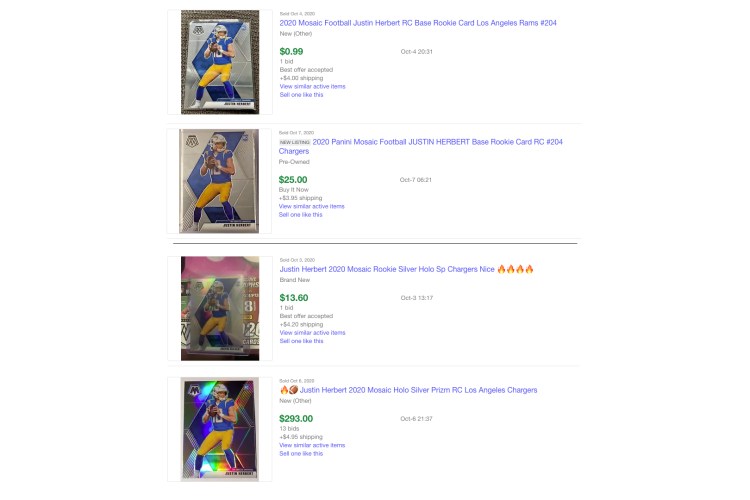 Card Market Rating: Buy. As illustrated above, the market for Justin Herbert cards took off after his performance this week. Before the game, there are a ton of instances of his raw (ungraded) base Mosaic card selling for $1. After the game, some of those same base cards were moving for $25. His Silver Holo Mosaic cards that could be had for under $100 (and if you searched hard enough, you could even find instances where they moved in the $15-$30 range) had a meteoric rise to around $300. If Herbert continues to play well, he is in the conversation for Offensive Rookie of the Year. I see no reason (barring injury) why his stock won't continue to rise. 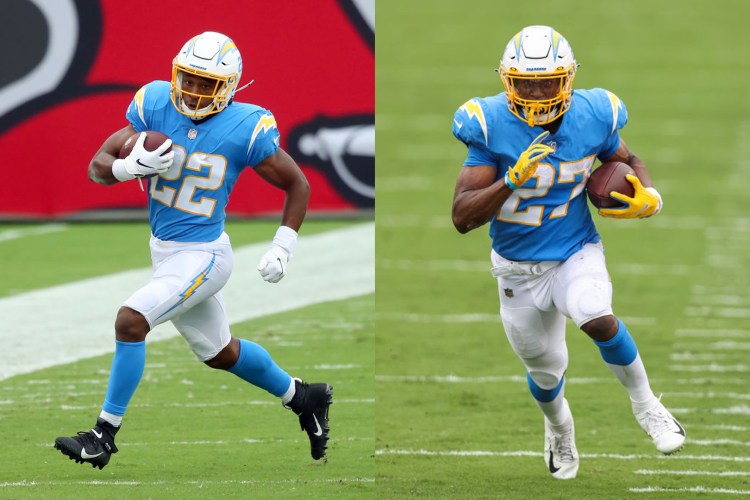 Austin Ekeler is the latest marquee running back who will miss time due to a serious injury. Ekeler suffered a leg injury that will likely keep him out of action multiple weeks, opening the door for Joshua Kelley and Justin Jackson to step into a more prominent role.

Kelley, who has played ahead of Jackson this season due to Jackson missing time while recovering from a quad injury, will likely handle most of the touches for the Chargers. After Ekeler went down Sunday, Kelley didn’t do much with his opportunities, posting a final tally of nine carries for seven yards, while also catching three passes for 26 yards. A lack of efficiency has been the biggest knock against him in his young career so far.

Meanwhile, Jackson carried the ball six times for nine yards, adding two catches for another 12 yards in just his second game this season. Jackson has shown he can be an effective runner in the past while filling in for former Chargers’ running back Melvin Gordon.

Fantasy Ownership: Joshua Kelley’s ownership sits at roughly 55%, so if you can’t pick him up, we understand. That’s why we also mentioned Justin Jackson this week, who comes in at just 7% and should be a much easier get for you. There’s no telling how the snap distribution will look, so both guys make for worthwhile pickups until we get a better idea of how they’ll be used.

DFS: (DraftKings: $TBD, FanDuel: $TBD) @ Saints Just like Justin Herbert above, we don’t have pricing available for either running back yet. The player I’d be more confident in rostering would be Joshua Kelley, but there are likely better places to look this week. The Saints are about as bad against the run as they are against the pass, making this a favorable matchup for either guy. Game script would indicate that the Chargers could trail for most of this game, so I would put Kelley in the low-owned tournament only category this week.

Card Market Rating: Hold. Joshua Kelley excites me more than Justin Jackson because he is a rookie and could be a good player to flip. His Mosaic rookie cards can be purchased for relatively cheap and if he puts together a good game or two, there might be some interest in the market. However, it seems far fetched to think that either of these two will take over the #1 spot from Ekeler, so once he is back from his injury, the interest will die down. If you want to take a short term flyer on Kelley, go for it. Just don't go crazy. 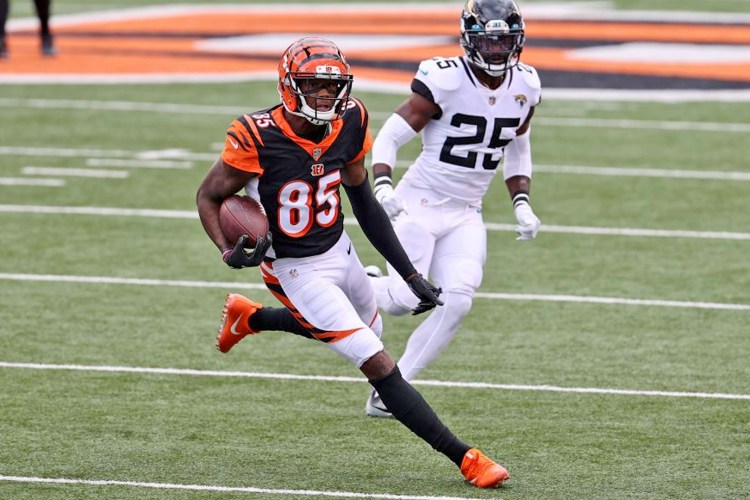 I’m ready. I’m ready to proclaim that Tee Higgins has unseated veteran A.J. Green as the Bengals’ number two receiver going forward. After watching Green for four weeks, I’m declaring him done. He is no longer a WR1 in the NFL and can’t be trusted in your fantasy lineups.

Higgins, however, is someone we can trust. He has now seen six or more targets in three consecutive weeks, easily outplaying Green in the process. With the number of passes that former UPNXT honoree Joe Burrow is attempting, Higgins is definitely worth adding to your rosters.

Fantasy Ownership: Even though Higgins’ breakthrough game was in Week 3, he’s still under-owned in fantasy leagues. He should be available in nearly 70% of fantasy leagues if you need some help at wide receiver. I wouldn’t even mind dropping Green to get him.

DFS: (DraftKings: $4,900, FanDuel: $5,400) @ Ravens This might not be an ideal spot to roster Higgins in your daily fantasy lineups. While the total is 51.5, the Ravens are favored by 13.5, which spells blowout central. Could Higgins benefit from such a large spread? Sure. There’s always the potential for the Bengals to throw it 40+ times especially if they’re trailing all afternoon. Until we see more high yardage totals from Higgins, we should consider him a touchdown-dependent receiver. Roster Higgins in tournaments only this week.

Card Market Rating: BUY! BUY! BUY! With Joe Burrow tossing the ball all over the field and AJ Green looking washed up, there is a very good chance that he and Tee Higgins become a force to be reckoned with for the next decade. He has everything you want in a receiver and plays in a pass-happy offense. Combine that with the inexpensive cost of entry on his base and silver Mosaic rookie cards, and we have a recipe for success. If you listen closely, that sound you are hearing is my mouse clicking "buy it now" on his silver holos before any of you read this article! 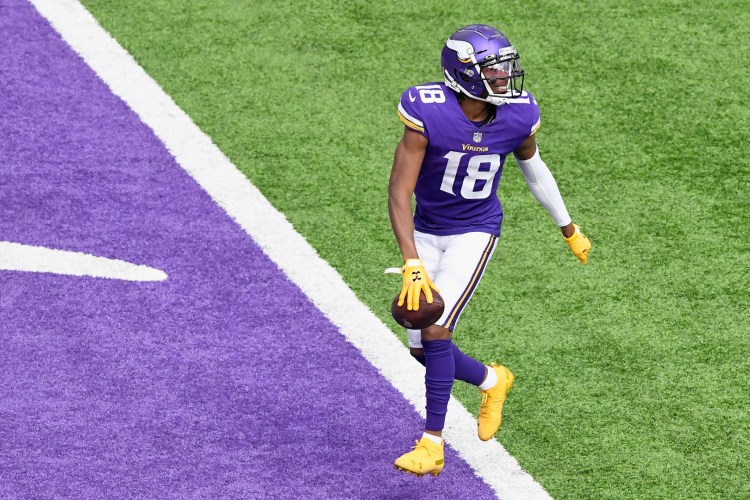 THE SCOOP: Justin Jefferson did it again! Our top pick from last week followed up his Week 3 breakout performance with another impressive game that saw him eclipse the century mark in receiving yards. While Kirk Cousins only attempted 22 passes, Jefferson made the most of his five targets, proving once again that he’s a deep threat for the Vikings.

UPNXT @ Seahawks: I’d look for Jefferson to keep the momentum going versus Seattle this week. This projects to be a high scoring affair, meaning Jefferson should be heavily involved again. Keep him in your lineups as a WR3/FLEX.

THE SCOOP: Aiyuk’s freakish athleticism was on display again Sunday night versus the Eagles. He took a carry to the house, while leaping over a defender and landing in the endzone. Even with Deebo Samuel back, Aiyuk showed he’s still going to be involved for the Niners.

UPNXT vs Dolphins: As long as Aiyuk is getting touches, he is worth considering in your lineups. The 49ers will continue to use him all over the field, putting the ball in his hands in different scenarios. He’s a touchdown waiting to happen.

THE SCOOP: Gaskin led all Dolphins’ running backs in touches again, making it clear he is the featured back in this offense. Although Miami mostly abandoned the running game in this matchup, Gaskin was still tied for third in targets with four.

UPNXT @ 49ers: The Dolphins travel to San Francisco to take on a battered 49ers team. With bye weeks starting and a plethora of injuries to running backs, Gaskin is start-worthy as an RB3/FLEX play.