Who Owns AEW? What You Should Know About Wrestling’s Newest Promotion 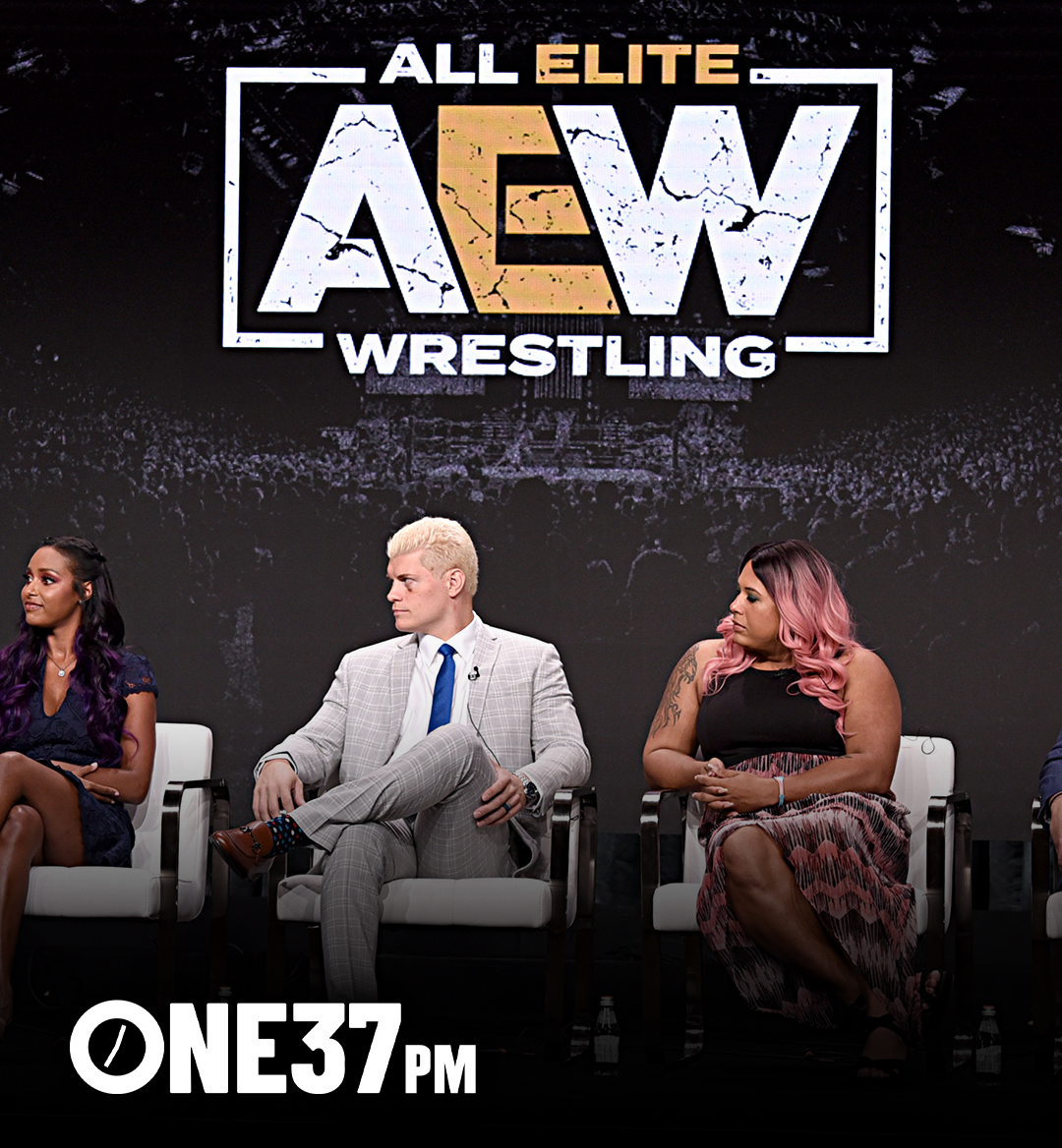 Vince McMahon and company regularly produce an in-ring product that’s viewed by millions of fans on a weekly basis. Plus, they deliver PPV’s and other types of grand content on their WWE Network streaming service. Thanks to the new deal that will see that very same service carry over to NBC’s Peacock streaming client, WWE will rack up even more funds than ever before and continue to stay on top from a financial standpoint.

However, an up and coming wrestling fed has done its best to change the tide of the business as a whole. That company is known as All Elite Wrestling (AEW), which is primarily owned and led by the son of a billionaire businessman and sports tycoon. AEW’s early successes have played out in an impressive fashion and paint a picture of a bright future for the fledgling wrestling company.

So who owns AEW? It’s time you all got a better idea of the movers and shakers behind the organization, its inception, its rise to fame, and how things are looking for the company’s future dealings.

AEW’s lead investor is Shahid Khan. His strong business acumen can be seen via his ownership of American automotive company Flex-N-Gate. As for his involvement in the sports sector, Khan holds the position of owner for the National Football League’s (NFL) Jacksonville Jaguars and the English Premier League’s (EPL) Fulham F.C teams. Now that he’s dipped his toes into the sport of professional wrestling, Khan is classified as co-owner of AEW, alongside his son Tony Khan.

Tony’s co-owner position within AEW is one of many —he’s also certified as the company’s founder, president and CEO. The four main pillars that first signed on with the company as in-ring talents also act as its executive vice presidents: Cody Rhodes (the son of Hall of Fame wrestler Dusty Rhodes and half-brother of Dustin Rhodes), Matt & Nick Jackson (better known as The Young Bucks), and Kenny Omega. Rhodes’ wife Brandi Rhodes also holds an important position as AEW’s chief brand officer. She also happens to compete in the ring from time to time.

At the moment, AEW isn’t a publicly traded company. However, the huge financial backing from the Khan Family has done wonders for its first two years in business and placed it in a prominent position thus far. The four main divisions that fall under the AEW umbrella include AEW Games, AEW Heels (which is a community effort led by Brandi that’s meant to appeal to female wrestling fans), AEW Music, and Shop AEW.

The genesis of AEW can be traced back to a simple tweet posted in 2017. In response to a question from a fan, wrestling journalist Dave Meltzer noted that a wrestling promotion by the name of Ring of Honor (ROH) couldn’t sell out an arena with 10,000+ fans. Cody Rhodes got wind of that sentiment and decided to challenge Meltzer’s comment.

I already gave them their biggest buyrate...put The Bucks & I on the card & 3-months to promote

Cody and The Young Bucks were experiencing mega levels of popularity at the time due to their affiliation with the Bullet Club faction and group within the group known as The Elite. The event that eventually came from their combined promotional efforts was All In 2018, which surprisingly sold out in 30 minutes. The biggest claim to fame for All In was the fact that it had the largest audience for a wrestling show held in America not affiliated with WWE or WCW since 1993. All in all, 11,263 rabid wrestling fans showed up to watch the very best from ROH and beyond showcase their talents on a much larger scale.

Thanks to the overwhelmingly positive response and financial success garnered from All In, plans were put in place to expand Cody & The Young Bucks’ ambitions into a brand new wrestling promotion. Several trademarks for the company were filed on November 5, 2018, which then led to rampant speculation about its validity. Fans began looking into the rumors behind AEW as legit once Cody, The Young Bucks, Adam Page, and several other ROH wrestlers left the promotion following December 2018’s Final Battle event. Fast forward to January 2019, where an episode of Being the Elite officially announced the creation of AEW and its very first PPV extravaganza: Double or Nothing.

On the lead up to Double or Nothing 2019, AEW began finalizing its roster members and slotting in its top-level executives. On January 8, 2019, a special press conference was held for the company on the forecourt of the TIAA Bank Field. Among the names that appeared during that event were Chris Jericho, Pac, and SoCal Uncensored (Christopher Daniels, Scorpio Sky, and Frankie Kazarian). A month later on February 7, 2019, AEW held an even bigger fan gathering and released tickets for the upcoming Double or Nothing PPV. Kenny Omega, the Lucha Brothers (Pentagon Jr. and Rey Fenix), and several others staked their claim as the newest members of the AEW locker room during that event.

Another major announcement for the new wrestling fed arrived on May 15, 2019; AEW and WarnerMedia announced a deal for a weekly TV series that was eventually christened AEW Dynamite. In the months that followed, AEW shocked the world thanks to the debut of former WWE talent Jon Moxley (formerly known as Dean Ambrose) at Double or Nothing 2019. AEW went on to produce additional events that year (Fyter Fest in June and Fight for the Fallen in July) and solidify its major championships. At All Out 2019 in August, Chris Jericho defeated Adam Page in the main event to become the inaugural AEW World Champion.

AEW Dynamite made its official TV debut on TNT on October 2, 2019 and averaged a total of 1.409 million viewers. With those impressive numbers in mind, the first episode of Dynamite gave it the honor of having the biggest TV debut on TNT in five years. Since then, AEW has brought in a flood of exciting new talent and given them an exclusive YouTube series to showcase their skills on called AEW Dark. The company has put on other special PPV cards (Full Gear and Revolution), earned several match of the year accolades, entered partnerships with other wrestling feds such as AAA & Impact Wrestling, and regularly competes with NXT for Wednesday night wrestling dominance.

The Future of the Company

Wrestling fans can look forward to watching the action on AEW Dynamite unfold on TNT for the foreseeable future since the company’s domestic TV deal has been extended through 2023. That bit of good news has already been joined by an even more applause-worthy announcement: AEW will be adding a second weekly TV series to WarnerMedia’s TNT network at some point.

The most intriguing portion of AEW’s future outlook is its fruitful partnerships with other wrestling feds. Thus far, Tony Khan’s squared circle venture has utilized wrestlers from Oriental Wrestling Entertainment, Joshi feds that originate from Japan, AAA, Impact Wrestling, and the National Wrestling Alliance. And after a recent run-in from famed Bullet Club member KENTA, it looks like the forbidden door that once locked out a deal between NJPW and AEW has finally opened. Talent swaps between Japan’s biggest wrestling federation and AEW paint a very bright future for what’s to come in the proceeding years.

As far as new titles go, Tony has made it clear that AEW Trios (Six-Man) Championships are arriving sometime soon. During a media conference call, the titles were brought up as a new element that will arrive sometime in 2021. AEW’s tag team division is one of strongest in the world in comparison to its competition’s offerings, plus it plays host to an “elite” lineup of six-man stables that can vie for the newly introduced titles.

AEW regularly broadcasts its Dynamite series from the Daily’s Place amphitheater in Jacksonville, Florida due to the pandemic. But come 2022 and beyond, hopes are running high for the company heading back out on the road and presenting its brand of in-ring excellence to arenas full of thankful fans once again.