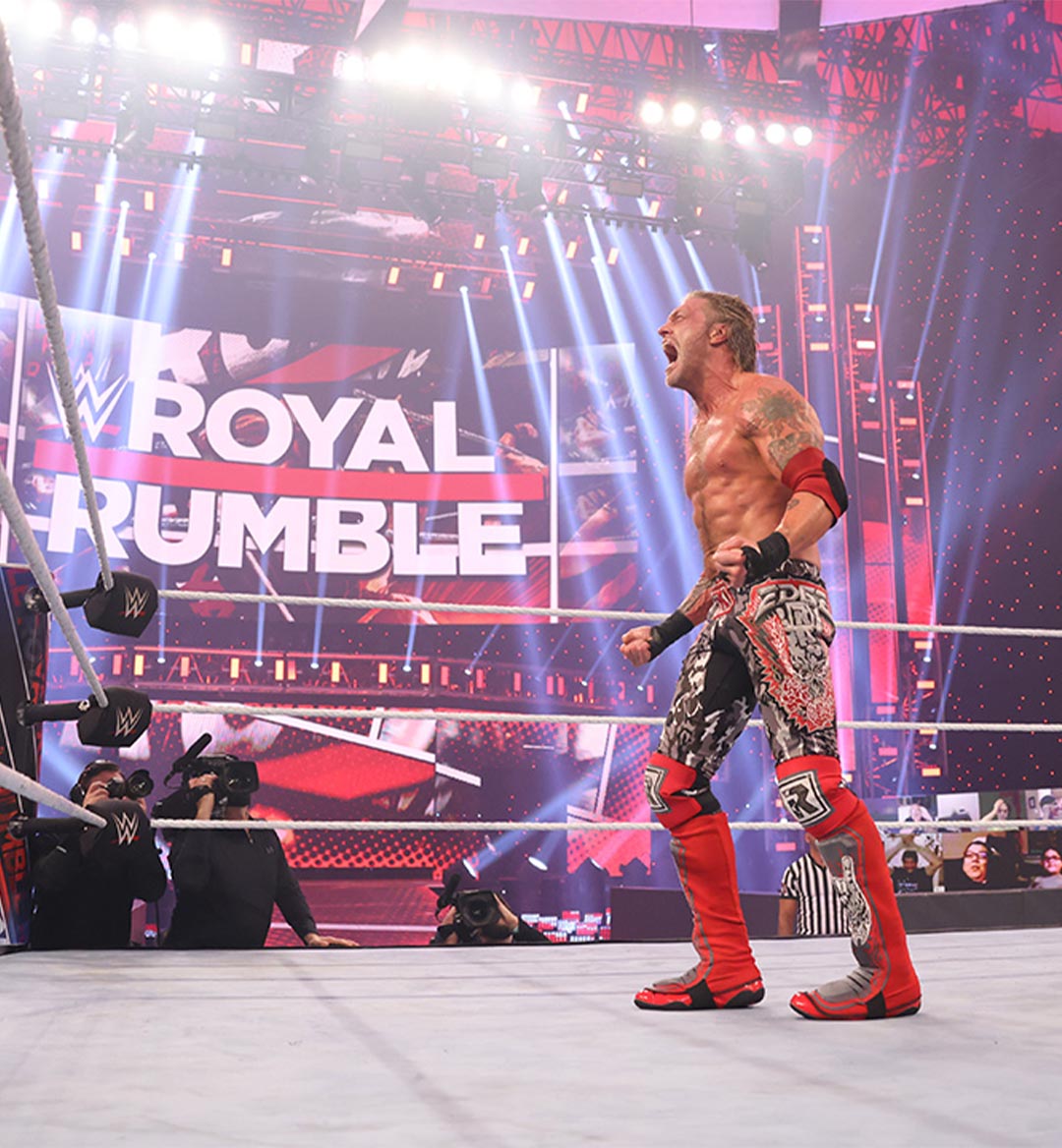 On Saturday, January 29th, the Road to WrestleMania in Dallas, Texas will officially get underway as the 2022 Royal Rumble comes our way.

And on that night, fans everywhere will find out which man and which woman will emerge as the respective winner of the Men's and Women's Royal Rumble battle royales. 30 men and 30 women will emerge for their chance to earn a coveted championship opportunity at the "Show of Shows" and hopefully emerge from 'Mania with a title strapped around their waists.

The fans that'll converge upon The Dome at America's Center will likely have all the fun in the world as they count down to each Royal Rumble match participant and be treated to surprise comebacks and triumphant eliminations as the event wears on.

Before the wrestling world lays eyes on the 2022 Royal Rumble in St. Louis, Missouri, allow me to offer my predictions as to who will win at the annual January WWE spectacular.

Preview & Predictions: SHE DID IT...SHE ACTUALLY DID IT! Doudrop (ugh, that name...) shocked the world as she managed to overcome Bianca Belair and Liv Morgan during a Triple Threat Match to determine Becky Lynch's next championship challenger. I've been a fan of Piper Niven ever since her NXT UK days and have been enjoying her post-Eva Marie resurgence as a singles Superstar. She took three big losses to Belair prior to this major title opportunity but winning the #1 contender spot should rehab her in time for the PPV.

Now I'm sure this match will prove to be a fun watch - Niven always rises to the occasion and Lynch tends to prove her worth during big-match situations. I think we all know how this is one is gonna end, folks. Niven is clearly being set up here as Lynch's latest challenger of the month and nothing more. She'll put up a good fight, but she'll ultimately come up short against the reigning queen of Monday Night Raw. There's just no way I can envision Lynch dropping the title before WrestleMania.

Beth Phoenix and Edge vs. Maryse and The Miz (Mixed Tag Team Match)

Preview & Predictions: As soon as Beth Phoenix ran down to the ring to terrorize Maryse during her husband The Miz's match against Edge, I knew exactly where this feud was headed next. The common sense I've accrued over years of watching professional wrestling steered me towards predicting this Mixed Tag Team Match with relative ease. Edge got the first big win in his now ongoing beef with The Miz.

But now that both men's respective wives have decided to get in on all the fun, things are set to get a bit dicier now that four people are set to go to war. Even though I'd like to see this feud come to a close with this next bout (I'm not exactly the biggest fan of Edge wasting his time with The Miz...), my gut is telling me it'll continue after this match comes to a close. I say all that to say this - The Miz & Maryse will find a screwy way to overcome Edge & Beth for the shock win here. And this will lead right into one final singles match between Edge and The Miz at the upcoming February PPV.

Preview & Predictions: So on one hand, I'm overjoyed at the fact that these two former Shield members are facing off again for a major title. They've had great matches before (Money in the Bank 2016!), so it's highly likely that they're gonna have another banger of a battle here. But on the other hand, this match clearly highlights just how undercooked the rest of the top of the card for Smackdown is. There's no one truly credible for Reigns to face due to a lack of care when it comes to building some viable challengers for the "Tribal Chief" on his own home brand.

I can't foresee a situation in which Rollins leaves with the belt, especially against the man that's been booked like an unstoppable menace on Friday nights. There's no way Reigns is dropping the strap here, which makes my prediction of Rollins coming up short an easy one to go with here. And with the constant teasing of a Champion vs. Champion match going down between Lesnar and Reigns, it's quite evident that WWE wants both men to hold onto their respective titles past the Royal Rumble.

Preview & Predictions: I wanted it. The fans wanted it. And even Bobby Lashley wanted it. After watching Bobby get his hands on Paul Heyman's "Beast" at Day 1 and taking note of the way the camera focused on the "All Mighty" as he watched Brock Lesnar celebrate his WWE Championship win, I just knew we were set for this dream match to finally come true. And thanks to Lashley's Fatal Four-Way victory on Raw, he's now set to lock horns with a fellow powerhouse in Lesnar for the WWE Championship.

I lost my mind when those two bulls interacted for a few quick seconds at Day 1, so I just know I'm gonna go even crazier when these two have a singles match against each other here. While Lashley overcoming Lesnar would be so damn hype, I just don't see it happening, unfortunately. Once the dust settles, Lesnar will emerge with his WWE Championship still intact. I just can't see Lesnar competing at 'Mania without WWE's main prize within his possession. Here's hoping we get an early Match of Year candidate here!

Preview & Predictions: We got a pretty stacked field when it comes to this year's Women's Royal Rumble lineup. Not only do we have the best ladies of Raw and Smackdown, but we also have past WWE Divas and even one that currently holds the Impact Knockouts Championship! Mickie James is waltzing back into WWE for this shocking one-time appearance to bring some more eyes to the title and Impact as a whole, which is really cool.

So who am I expecting as far as surprise entrants? Jazz (even though she says she's retired), a few NXT female competitors (Io Shirai, Ivy Nile, & Raquel Gonzalez all make sense to me!), and Molly Holly are safe bets. As far as the final four goes, I'm gonna throw out a wild prediction there - it'll be Charlotte Flair, Sasha Banks, Bianca Belair, and a returning Ronda Rousey! The wrestling dirtsheets have been alluding to the "Rowdy" one coming back at the Rumble, which I think is totally going to happen.

And you know what else? I'm gonna go out on a limb here and pick Rousey as the Royal Rumble entrant who'll emerge as the last woman standing. Rousey's going to WrestleMania to go on to face Becky Lynch for the WWE Raw Women's Championship in the match we were supposed to get back at WrestleMania 35!

Now when it comes to unexpected legends and non-WWE talent showing up to enter the fray, my gut is telling me X-Pac (who recently revealed he's medically cleared to compete in the ring!) or Heath (yes, I think we're gonna get another appearance from an Impact Wrestling talent on this PPV!) immediately come to mind. And judging by everyone else set to compete here, the 2022 Men's Royal Rumble is shaping up to be a fun one.

So now let's get into my Final Four predictions - I'm gonna go out on a limb here and select Austin Theory, Kevin Owens, Big E, and Damian Priest. Seeing as how weak the SmackDown portion of this match is, I get the feeling that the Raw side will look a million times better than their Friday night rivals. And my pick for the winner is none other than Big E! His lackluster WWE Championship run came to an end on a disappointing note, which leads me to believe he'll begin to rehab himself with a big win here that'll take him to WrestleMania 38 - Night One for a huge bout with Brock Lesnar.