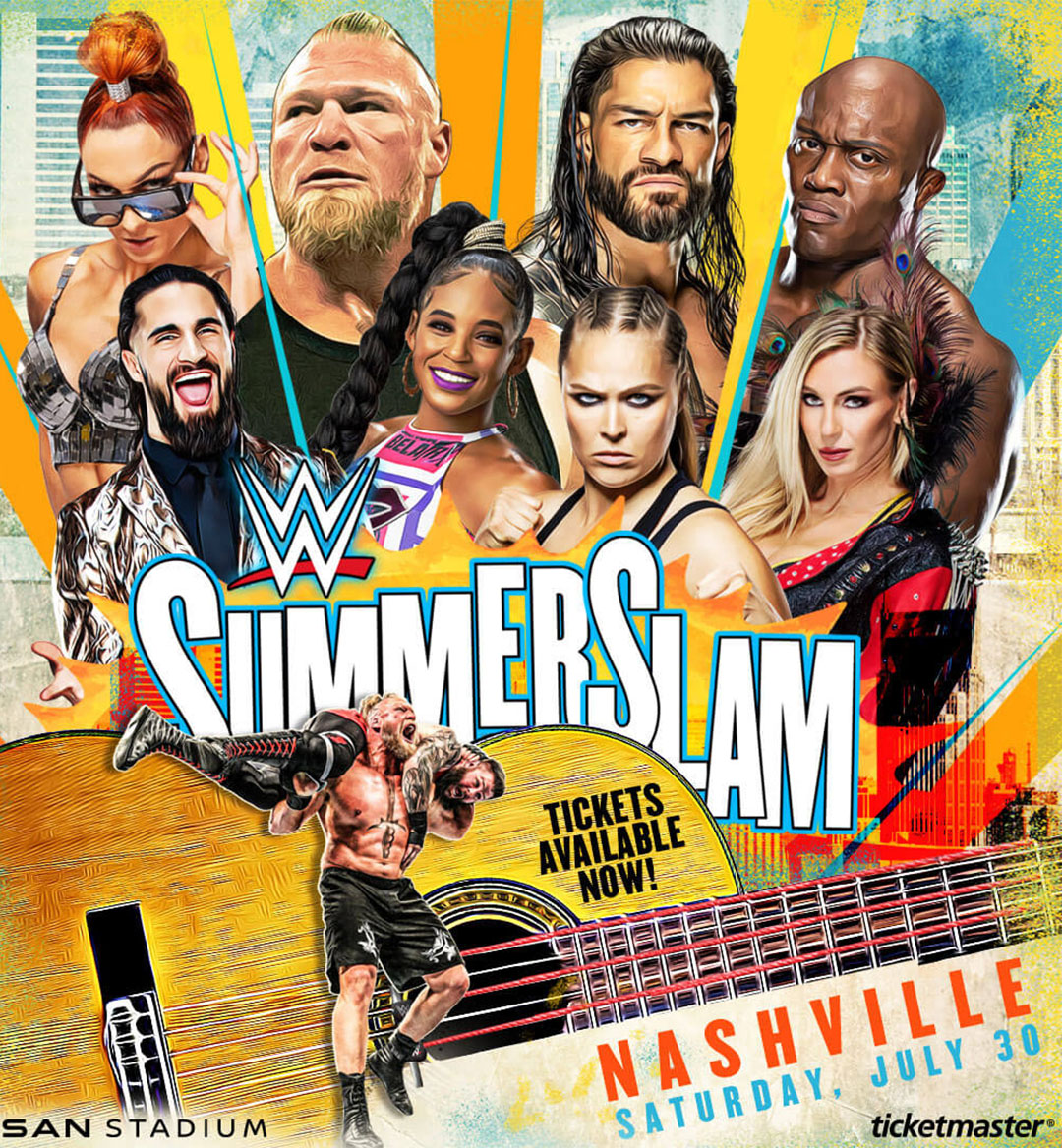 WWE is taking its summer spectacular to Nashville, Tennessee this year! And just like the year before, SummerSlam is going big with its planned venue as it's set to emanate from the Nissan Stadium. The excitement levels are unsurprisingly off the charts for this event. And most fans (including me!) are shocked by the fact that this installment of the summer wrestling extravaganza is actually taking place in July instead of August. I'm not complaining, though! It's cool that this annual August event is happening a month earlier. Now let's break down all the confirmed matches for this event by getting into my WWE SummerSlam 2022 predictions! 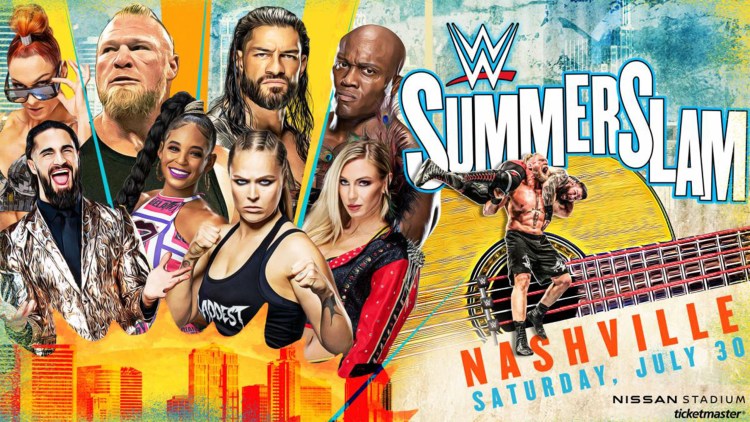 The Mysterios (Dominik Mysterio and Rey Mysterio) vs. The Judgment Day (Damian Priest and Finn Bálor) (No Disqualification Match)

Preview & Predictions: The Judgement Day really switched up on the homie Edge and slotted Finn Bálor into his leadership role. Man, it really be the ones closest to you that do you so dirty. Since that big change, Finn, Damian Priest, and Rhea Ripley have made life extra difficult for Rey and Dominik Mysterio. All the beef between these two duos has finally resulted in them getting booked in the perfect feud ender - a No DQ tag team match that gives The Mysterios the advantage since they'll need some weapons to make a dent in the gigantic Priest.

I'm sure Rhea will play a part in how this match unfolds during its middle to latter portion. But at some point, I feel like she'll get her comeuppance from someone we're all expecting to see - a returning Edge! Those mysterious vignettes have clearly been cluing everyone into his impending return, which I think is going to transpire at SummerSlam during this match. Rey and his son will overcome The Judgement Day thanks to some much-needed assistance from Edge. When it comes to my WWE SummerSlam 2022 predictions, I'm very confident in my Edge prognosis coming true.

Preview & Predictions: In one of the most impressive examples of quality tag team wrestling this year, The Usos and The Street Profits arguably put on the match of the night at Money in the Bank. Jimmy and Jey ended up prevailing at the close of that epic contest, but their win came with a catch since Montez Ford's shoulder was up while he took the losing pinfall. So it comes as no surprise that Ford and Angelo Dawkins are getting another shot at the tag team straps here.

If this match is anything like the one they had a few weeks prior, then we're going to have another match of the year candidate here. I think it would be criminal for The Street Profits to lose once again - it just doesn't make a whole lot of sense to continue lowering their stock here since they're one of the best tag teams across both main roster brands. My gut is pointing towards a triumphant win for Dawkins and Ford here. The Usos have been unified tag champs since May - I think now's the perfect time to give that act as titleholders a break and switch that act over to a hot babyface duo. That's the big crowd-popping moment I'm expecting here for my WWE SummerSlam 2022 predictions.

Preview & Predictions: Are we sure this match is going to happen? We were promised a WrestleMania rematch between Bianca Belair and Sasha Banks at last year's SummerSlam and we all saw how that went. We're pretty confident that the whole "card is subject to change" situation won't take place here once again, though. Bianca and Becky Lynch are most certainly going to run it back for the second time for the Raw Women's Championship in a repeat of their 2022 Match of the Year Candidate.

For this much-anticipated runback, everyone expects another crowd-popping encounter between modern-day women's greats. While Becky's a top contender that's always seen as a legit threat that can take the title whenever she pleases, I don't think a win is in the cards for her here. Bianca has a lot of juice left in her Raw Women's title reign, which is why I'm guessing she retains it here. Once Rhea Ripley comes back from her injury to take a shot at the champ, I'm convinced that Bianca will run into her biggest challenge to date.

Preview & Predictions: So Liv Morgan's the SmackDown Women's Champion now, huh? I may not be a fan of hers, but it's hard to deny just how passionate her followers are and just how much they rooted for her to get such a major opportunity. But I'm lowkey worried about how Liv's first title run is going to go based on how it went for a similar underdog champion. And the person I'm alluding to is Nikki A.S.H., who had an uneventful run as Raw Women's Champion soon after cashing in to win it. I'm already starting to peep the "she got lucky when she beat Ronda Rousey!" vibes now that Liv's champ, which is why I feel like her title run may end up being equally forgettable by the time she drops it.

But here's the thing - I don't think she's going to drop the title so soon. As a matter of fact, I think Liv's gonna hold onto her first championship up until the Fall. You'd think that Ronda would easily dispose of someone like Liv and you'd be right in feeling that way. But I foresee a surprise return here that'll lead to Liv eking out the win. Charlotte Flair will interfere at some point and land a killing blow on Ronda in order to get the revenge she desires due to her loss at WrestleMania Backlash. And due to that shocking attack, Liv will end up getting the pin on Ronda without realizing how her opponent got knocked out in the first place.

Preview & Predictions: Well I'll be! I had Seth Rollins pegged as Mr. Money in the Bank for the second time in his illustrious career. Who ended up getting the briefcase, though? Lame ass Theory, who got added to the match for no real good reason other than "because we can" from the WWE powers that be. I was shocked when he got beat for the United States Championship earlier in the Money in the Bank show and I was even more shocked when he showed up at the end of the show to get the last laugh. Now Theory wants his US title back from the man that submitted him for it in the first place, Bobby Lashley.

You know what? I think Theory's gonna fail in his attempt to get his gold back. I'm so used to that WWE story trope where they have the wielder of the briefcase lose a ton of matches before they cash in out of nowhere and finally win the biggest prize in the company. I foresee that treatment getting reapplied to Theory here - Lashley is going to retain his US Championship and remain as the #1 champion on Raw for the time being. Theory will still be in a good position as the 2022 Mr. Money in the Bank though, so this loss won't affect him too much.

Preview & Predictions: Pat McAfee is a constant highlight of WWE. He's fun to listen to at the commentator's booth and he's way better than your average celebrity when it comes time to put on his working boots. So far, Pat has put on some bangers with the likes of Adam Cole and Austin Theory (let's all ignore that steaming pile of trash he and Mr. McMahon produced at WrestleMania this year). Pat's highly disrespectful (and hilarious!) comments towards Happy Corbin have now earned him a new opponent to square off with at one of WWE's biggest premier events.

Now I'm the furthest thing from a Happy Corbin fan - he was way more entertaining as "Broke-Ass Corbin" if you ask me. And whenever he's in the ring, I tend to walk away from my TV and grab something to eat. But since Pat's being pitted against him, I'm actually going to give this Corbin PPV bout a chance. You just know Pat's SummerSlam entrance is going to make headlines! As for who'll emerge as the winner here, this one's easy to predict - Pat's going to add another W to his all-time record. Here's hoping Corbin diverts from his "Happy" moniker after taking yet another significant loss on PPV...

Logan Paul vs. The Miz

Preview & Predictions: So not only is Logan Paul a full-time WWE Superstar but now he's being presented as a...babyface? That's...a choice, to say the least. I'll have to hand the man credit, though - Logan looked great during his WrestleMania 38 tag match performance, plus his drip and million-dollar Pokémon card chain stood out for all the right reasons. The Miz turned on his boy Logan even though they overcame The Mysterios - it's clear that Miz wanted to teach his Hollywood homie a lesson about never turning your back on anyone in the world of professional wrestling.

So Logan's back and ready to get his revenge on the guy that brought him into WWE in the first place. The Miz presents the perfect foil for him and the sort of guy that could even get the fans to cheer for the instantly unlikable Logan. We got a major celebrity being placed in a prominent role with a supremely hated heel on a major PPV card here, so you know what the outcome's going to be - the good guy celeb is going to win so that WWE can brag about it on all the big media outlets the day after.

Preview & Predictions: Sigh...this again, bruh? I am sick to death of watching these two wrestle each other over...and over...and over. If we keepin' it a stack, they've only had one great match (the one at WrestleMania 31). And the rest of the rematches they've been involved in have ranged from decent to atrocious (that horrible main event from WrestleMania 34 lies at the very bottom of the barrel!). I was bored to tears during their WrestleMania 38 match. But after it ended, I was hopeful that we were finally moving on from them as rivals and moving on to fresher foes. But I was sadly mistaken. Now Roman Reigns vs. Brock Lesnar is happening for the seventh time with a Last Man Standing stipulation.

I'm so exhausted with these two at this point - I would have preferred Roman running it back with Bobby Lashley. And if WWE properly rehabilitated AJ Styles after all those losses he took from Edge and The Judgement Day, he would have made for a fun challenger to Roman's Undisputed WWE Universal Championship reign. It's really slim pickings when it comes to fresh challengers for Roman's title belts, so I see why WWE was forced into booking this stale matchup all over again. So who's going to win here? It's going to be Roman - Brock's not the one to end the "Tribal Chief's" legendary title reign, folks. Plus I just can't see Roman losing it when he's clearly being penned in to face Drew McIntyre at September's Clash at the Castle event.

Side note - Theory's definitely not cashing in here, either! As far as my WWE SummerSlam 2022 predictions go, I'm super confident about this one, in particular, being bulletproof.