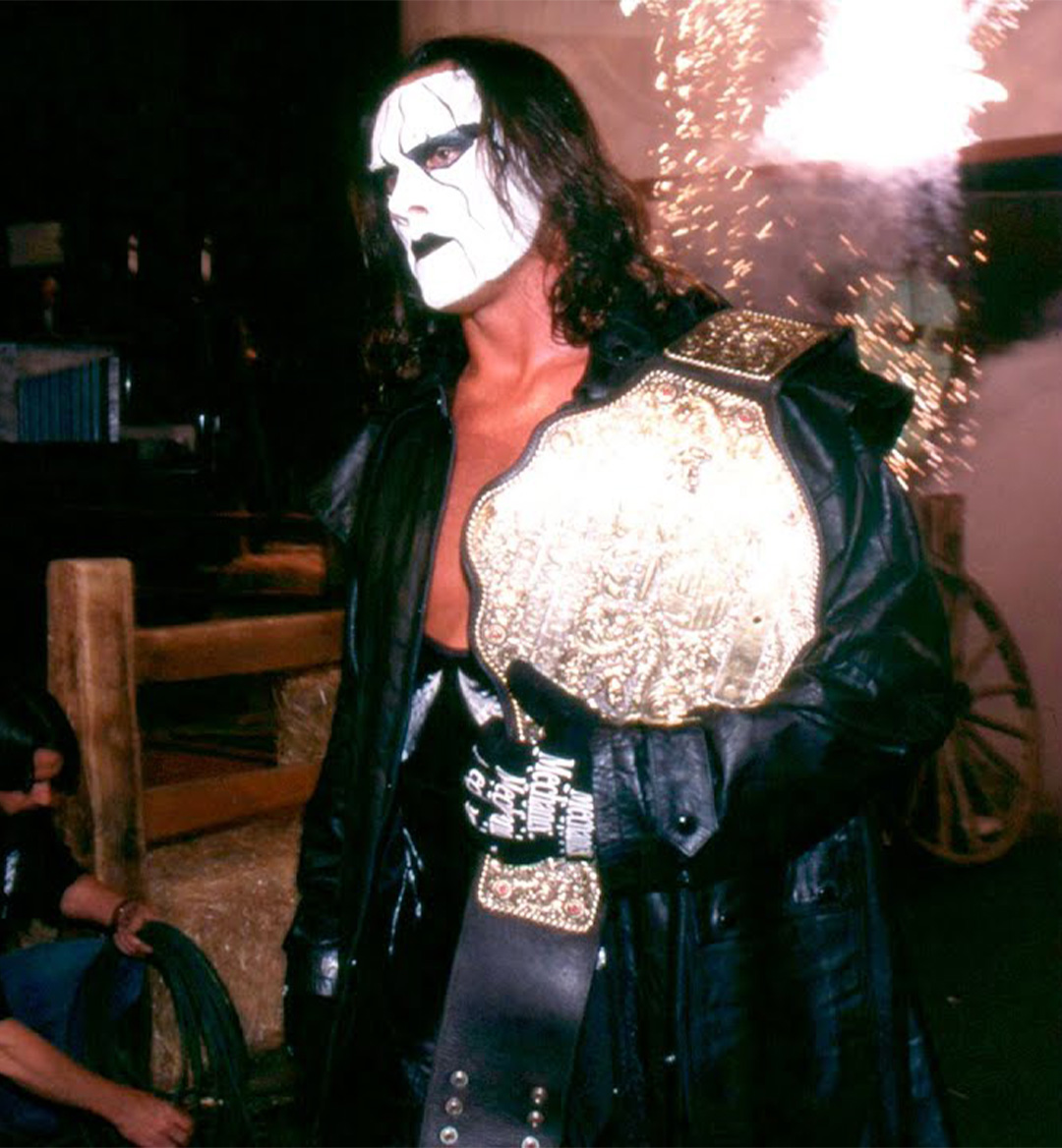 When Steve Borden puts on that famous face paint of his, business always picks up.

“The Man Called Sting” is regarded as one of the greatest in-ring competitors of all time due to a number of outstanding factors - his impressive in-ring prowess, magnetic charisma, likable persona, and triumphant victories all made him an easy crowd favorite. His long tenure in World Championship Wrestling is lined with several noteworthy moments and legendary matches that still hold up in quality to this very day. Whether you’re an old-school wrestling head that remembers Sting when he rocked a rat-tail hairdo or a new-school fan that’s currently enjoying his run in AEW, you’re going to want to check out his incredible catalog of past in-ring performances.

We just happen to have 14 of his very best WCW matches included here in chronological order for you all to enjoy.

1. Sting vs. Ric Flair (Clash of the Champions I)

Before this match took place, Sting stood out as a likable babyface that came across as halfway decent in the ring. But as soon he went the full 45-minute route in a time-limit draw with Ric Flair, everyone’s eyes opened to just how much of a future legend the face-painted youngster could be. The story being told here is simple - Flair played his part as the wily veteran who maintained his own comfortable pace, while Sting stepped into the role of the super energetic rookie who hit hard and fast. Sting stepped up to the plate to prove his worth and passed with flying colors thanks to his amazing performance here. This is the quintessential Sting match every wrestling fan has to see before they die.

One of the New Japan Pro Wrestling’s greatest exports made for quite the amazing rival for the classic beach blonde “Stinger.” This Great American Bash classic saw both face-painted greats put on a fast-paced clinic for the NWA World Television Championship. While the finish led to a pretty disappointing double pinfall, the rest of this title encounter proved to be awesome. Sting relied on his impressive power to prevail, while Muta utilized his stunning quickness to keep his opponent off his game. Those elements combined to produce one of the best eight-minute-long matches you’ll ever see.

So get this - Terry Funk was originally planned to be a part of this tag team contest in place of Dick Slater. Even without the presence of the wildman from Texas, this match still ended up being a classic war that wasn’t even hampered by its disqualification finish. Both teams put on a Jim Ross special (that’s a barnburner, for the uninitiated) that featured smart psychology around Ric Flair’s “broken neck” at the time. Sting and Flair fought side by side in a rare moment and gelled like a well-oiled machine against Gary Hart’s boys. This match isn’t talked about enough and that’s a shame. Do yourself a favor and seek this one out when you get a chance.

When the time had finally come for Sting to win the big one, he did it in phenomenal fashion. Most old-school wrestling heads remember this match fondly due to all the pomp and circumstance surrounding it - Sting was backed up by a squadron of big-name talent, while Flair’s only supporter was his Four Horseman ally Ole Anderson. The crowd knew they were a part of something special here as they watched Sting and Flair put on one of their usual clinics. The madness that took place on the outside played well into Sting’s eventual triumph and resulted in one of his most iconic career highlights.

Sting can always pat himself on the back considering the fact that he’s been a part of two of the best WarGames matches of all time. Yes, this match is remembered more for Sid Vicious’ powerbomb botch on Brian Pillman. But everything that transpired before that awkward moment proved to be awe-inspiring. Pillman’s cage assisted attacks on Windham, Rick Steiner’s moment of comeback glory, the multiple Figure-Four Leglocks, and all the bloodletting contained in this WarGame spectacular afford it its legendary status. Sting’s frequent babyface lineups always made for the best-mishmash teams, didn’t they?

6. Sting and Lex Luger vs. The Steiner Brothers (Rick Steiner and Scott Steiner) (SuperBrawl I)

The now commonplace prospect of two babyface teams going head to head was considered a rarity back in the day. Imagine how hard it was for the crowd to choose their favorites during this superstar-filled tag team war. Longtime besties Sting and Lex Luger delivered the best match during their tenure together against the powerhouse Steiner Brothers. This match still manages to get fans young and old to jump out of their seats - there’s a dizzying array of power moves on display here, plus Sting’s jaw-dropping leap to the outside onto Scott Steiner is awe-inspiring. This is the epitome of tag team greatness.

Remember how we mentioned how Sting’s been involved in two awesome WarGames Matches? Welp, this is the second one. Sting aligned himself with Barry Windham, Dustin Rhodes, Ricky Steamboat, and Nikita Koloff to engage in battle with Paul E. Dangerously’s powerful ensemble. The combination of Steve Austin, Rick Rude, Arn Anderson, Bobby Eaton, and Larry Zbyszko presented Sting’s Squadron with the perfect dancing partners for this matchup. This WarGames matchup is practically perfect - the action moved at a perfect crescendo and paid off handsomely once everyone entered the ring. Sting’s crowd-pleasing submission victory over Eaton brought this stable war to a satisfying close.

It’s always awesome to see your favorite wrestler step out of their comfort zone when pitted against an opponent of a different caliber. That was definitely the case here when Sting locked horns with the unpredictable Cactus Jack. This Fall Count Anywhere match saw Sting adjust his gameplan accordingly and meet the hardcore icon head-on with his own reckless offense. Jack responded in kind with his usual risky maneuvers on the outside, which made the crowd come unglued at certain intervals of the match. Sting showed a different side of himself here and helped grow his legendary status thanks to his hardcore dancing partner.

Sting and one of his fiercest rivals faced each other here in the King of Cable tournament final. And in order to ground the big man, Sting brought out all the big guns. This match showcased the amazing chemistry between both men as it showcased a more calculated version of Sting that picked his offensive maneuvers wisely. It was and still is wild to see Sting pull out a German Suplex and even a top rope DDT against the big man Colorado. Vader responded in kind with his usual overwhelming offense and brutalized the crowd favorite to some fans’ glee. In the end, Sting landed a sick midair powerslam on a flying Vader to cap off this hard-fought contest.

The next Sting vs. Vader classic on this list came with a special stipulation to up the ante - this one was contested as a White Castle of Fear Strap Match. Now was the vignette meant to hype up this match extremely cheese? Yes! But the match itself more than made up for the cornball antics perpetrated by WCW’s brass at the time. Sting and Vader produced the type of match that comes off gritty to the wrestling audience watching it and makes one wince in pain every time Vader lays in a stiff shot. Strap Matches usually aren’t all that home to write home about, but the immense brutality put on display here (and the blood that Vader spilled!) made this one a rare exception to the rule.

Four Hall of Famers in the ring at one time. An extra wrestling legend outside the ring. A super hot crowd. Those three elements played a huge part in making this tag team classic raise Sting’s stock even more. Watching him align himself with another legendary babyface while facing off with two of the greatest heels in wrestling at the time was and still is awesome. The in-ring work that was produced here focuses on the very best aspects of tag team wrestling and encapsulates everything fans love about the four legends on display here. Trust on this one - you’ll pop out of your seat during that spot where Sting throws Sherri Martel out of the ring onto Ric Flair.

Lord Steven Regal’s time spent in WCW solidified him as one of the most slept-on technical wizards in all of wrestling. When he was given the opportunity to compete against one of WCW’s biggest stars on PPV, Regal proved he could hang with the best of them. Steven’s “grinding” offense had Sting on the ropes, which forced the super babyface to rally back with his own submissions and signature fiery comeback offense. For 16 minutes and some change, both men put on a clinic that should be required homework for every wrestler that wants to up their grappling- and submission-based gameplan.

Never mind their Slamboree 1999 matchup - this WCW Nitro gem sticks out as Sting and Goldberg’s greatest match of all time. Sure, it had its usual WCW BS outside interference. But even with that slight blemish on it, the Wolfpac version of Sting and the best rendition of Goldberg still managed to wrestle their asses off. Sting dished out some shocking power moves on “The Man” and even looked as if he had Goldberg’s number at the time, which rarely happened. Goldberg matched up perfectly with Sting and put his power-based offense into overdrive against the WCW legend. This match definitely belonged on PPV with 10 extra minutes and without the outside shenanigans.

Two of WCW’s biggest babyfaces locked up here and had the crowd in the palm of their hands. The opening salvo of face-to-face trash-talking and repeated shots to the face made way for a hotly contested encounter that even spilled to the outside. The false finishes that come into play during this match will have you on the edge of your seat years after it originally took place, which says a lot about how amazing Sting and DDP’s work is. The creative finish to this match sticks out as its finest aspect - DDP low blows Sting while the ref is distracted, which forces the Stinger to retreat into the corner. DDP then tries to capitalize by landing a Diamond Cutter out of the corner, but Sting holds onto the rope in order to counter. Then out of nowhere, Sting grabs hold of DDP and leaves the corner by planting DDP with a sick Scorpion Death Drop. What. A. Finish!