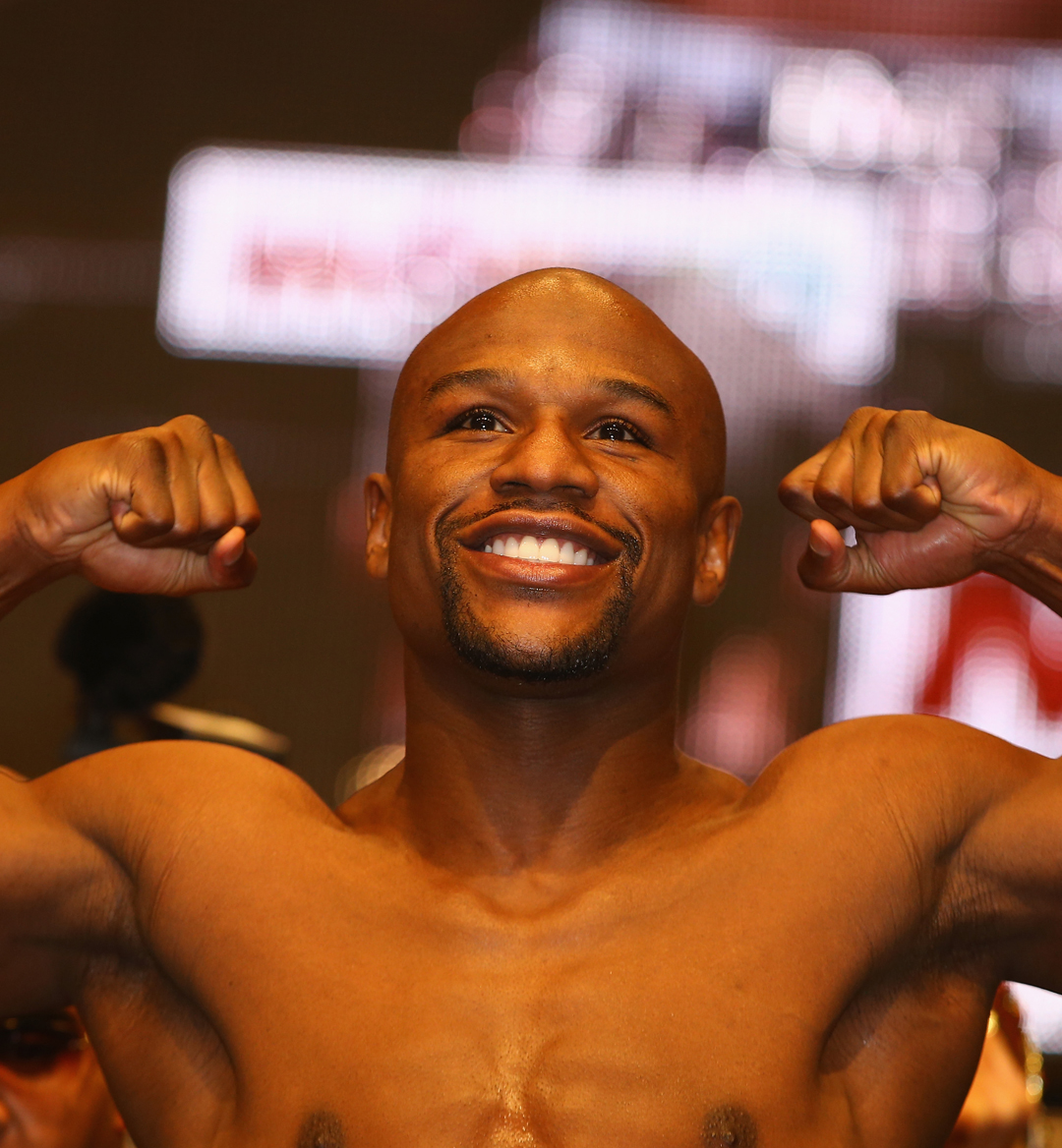 He might be the most discussed name in boxing history and at the end of the day, what is the name of the game?

To hit and don’t get hit. And there was no one better at the “game” of boxing than Floyd Mayweather.

We look back at the 15 best performances and knockouts in the career of Floyd Mayweather.

This one was entertaining. Cotto is one of the most well-respected warriors in boxing history, and he gave Mayweather everything he had. It is not Mayweather’s “cleanest” victory but a testament to his ability to overcome adversity.

A pretty bizarre night for boxing. Most people remember this fight for the wrong reasons, but if we are trying to stay focused on the sport of boxing—this was a fight of adjustments for Mayweather. Judah was as skilled of an opponent as Mayweather would probably face. After a few competitive opening rounds, Floyd adapted and edged out Judah in a somewhat close fight.

Mayweather won every round of the fight. He scored a knockout with a great body shot, and perhaps the most impressive part was that he was competing with some high-standards he had already set for himself. This fight followed his brilliant outing against Arturo Gatti, and Floyd followed up what was his best performance yet with another great stoppage over Mitchell.

Much like the Jose Luis Catillo matchup, it was important for Mayweather to solidify himself as the superior boxer in the rematch. Unfortunately, most people remember this fight for its bizarre moment in the back half of the fight where Mayweather claimed that Maidana bit his glove. When it comes to the actual X’s and O’s—Mayweather cleaned up all the complications he faced in their first meeting.

For so many people, the appeal to watch Mayweather was to see him lose. It is the motto that made him so much money. And to be honest, it worked.

So when Mosley clipped Mayweather, there were a lot of people who got very excited; after all, it was one of the hardest shots Mayweather probably ate in his life. With the hit coming so early in the bout, a lot of people thought this was their chance to see Superman bleed. But Mayweather shut it down. He dominated the remainder of the fight, and the judges’ scorecards reflected that.

The Best of the Best

“This fight should have happened eight years earlier.”

Yes, I know. Everyone knows. But let’s take a step back for a second.

Mayweather fought Pac in May of 2015.

Four years later, Pacquiao still holds titles in the welterweight division. So, if you want to credit Manny for extending his career, it means you must also award credit to Mayweather for cruising through their 2015 matchup.

The big takeaway from this matchup was the financial dynamic. Mayweather earned roughly $250 million in total from the bout. That’s why they call him “Money.”

This was a big fight for Mayweather. Many people consider the first bout between this duo to be the closest call of Mayweather’s illustrious career. Credit needs to be given to Castillo for being a difficult puzzle for Mayweather to solve.

In their rematch, Floyd proved to be the better fighter. It was a much more decisive victory for Floyd, quieting a lot of doubters who made a lot of noise following the first bout.

This one dates back all the way to 2001. So before the fancy cars and incredible jewelry collection, Mayweather was a hungry scrapper. He took on Jesus Chavez in his final fight at super-featherweight. He had his uncle, Roger Mayweather, as his trainer for this fight.

Towards the end of his career, it was clear that Floyd had taken a different approach to boxing. Instead of dictating the pace of the fight, he would transform into one of the best counter punchers in the history of the sport. He would let other fighters try to close the distance, and when they became frustrated, he would capitalize on their mistakes.

Mayweather abused the Philly Shell stance in this fight. He landed an incredible knockdown in round two with a wicked fast left hook.

Juan Manuel Marquez gave Manny Pacquiao A LOT of trouble in his career. He is also the mastermind behind one of the meanest knockouts in the HISTORY of boxing.

So for Mayweather to secure a unanimous decision over Marquez is a rather impressive feat.

Floyd has mentioned on numerous occasions that Augustus was one of his tougher opponents. There is the old saying, “styles make fights.” And man oh man, did Augustus have style.

Known as “The Drunken Master,” Augustus had flair, but Mayweather provided some sobriety to Augustus.

During the 9th round of the bout, Mayweather poured it on. He doesn’t make mistakes. Even in the face of a wild opponent, Mayweather remained sharp. The towel was thrown in, and Mayweather celebrated the impressive win accordingly.

When Mayweather met with Hatton in the ring, there was more than just that single fight on the line.

In boxing, the undefeated record is revered.

And at times, it is probably to a fault. So many fighters and promoters act in fear of losing their undefeated record, they may not aggressively pursue tough matchups. A lot of UFC and MMA fans will claim this is what separates their sport from boxing.

But when you ultimately do get the big matchups, it makes the buildup worth it.

Take Mayweather vs. Hatton, for example. When the two undefeated giants faced each other, it felt fulfilling. This was a fight that happened at the right place, at the right time.

And Mayweather delivered on one of his best performances of his career. In every single facet of the fight, he was the better man. When Floyd’s name is brought up in the GOAT discussion, this is a fight that stands high on his resume.

Pretty Boy Floyd was 21 freaking years old. This was less than two years into his professional career, and Mayweather dominated the number one ranked fighter in the division at the time.

Mayweather took on Genaro Hernandez in October of 1998.

This fight looked different than most Mayweather fights. To negate the speed advantage for Mayweather, Hernandez tried to make things remarkably physical. Early in the fight, he stepped on the foot of Mayweather, sending Floyd to the canvas. The tactics seemed to work briefly for Hernandez, as Mayweather, at times, got caught up in the wrestling match.

But as time went on, Mayweather asserted himself. The jab was electric. The straight right hand was impeccable.

In round seven, Mayweather had his way. It seemed as if he landed a dozen uppercuts in that round alone. Henandez’s corner stopped the fight after the eighth round.

It was a fight that gave us a look into the future.

Listen, I’ve made the argument. I’ve asked the questions. When Floyd took on Canelo, it was at the perfect time. Canelo was *just* about to make his rise in the ranks, and seeing what we see in him now, it makes sense why people say Floyd took him on while he was young.

But… if you want to put that much respect on Canelo’s name, then you NEED to have admiration for the lesson that Mayweather gave him. Alvarez had no answers for Floyd. At every moment, Mayweather was out of distance, predicting Alvarez’s next move, or just landing shots before Canelo. The fight may not have the same level of highlight material, but it still remains one of Mayweather’s most incredible performances. In my opinion, he is not given enough credit for this one.

You would be hard-pressed to find any boxers that embody the “fighting spirit” more than Diego Corrales. He is responsible for one of the most improbable wins and comebacks in the history of the sport.

When you consider the heart that Corrales had, it makes this performance from Mayweather even more impressive. Over the course of the fight, Mayweather scored five knockdowns. Even when Corrales’ corner threw in the towel, he was angry that he couldn’t continue.

I think this is the greatest show that Mayweather ever put on. And when you consider the competition, it solidifies its ranking. Arturo Gatti is a world champion, a member of the boxing hall of fame… and one of the most admired legends in the history of the sport.

With all of that laid out, Mayweather gave him the business that night. When Gatti thought Mayweather was attacking the head, Floyd would go to the body. And when Gatti protected his body, Mayweather landed shots upstairs. There is a terrific moment in the fight where Mayweather lands four consecutive straight right hands. Gatti’s corner had no choice but to throw in the towel half way through the fight.