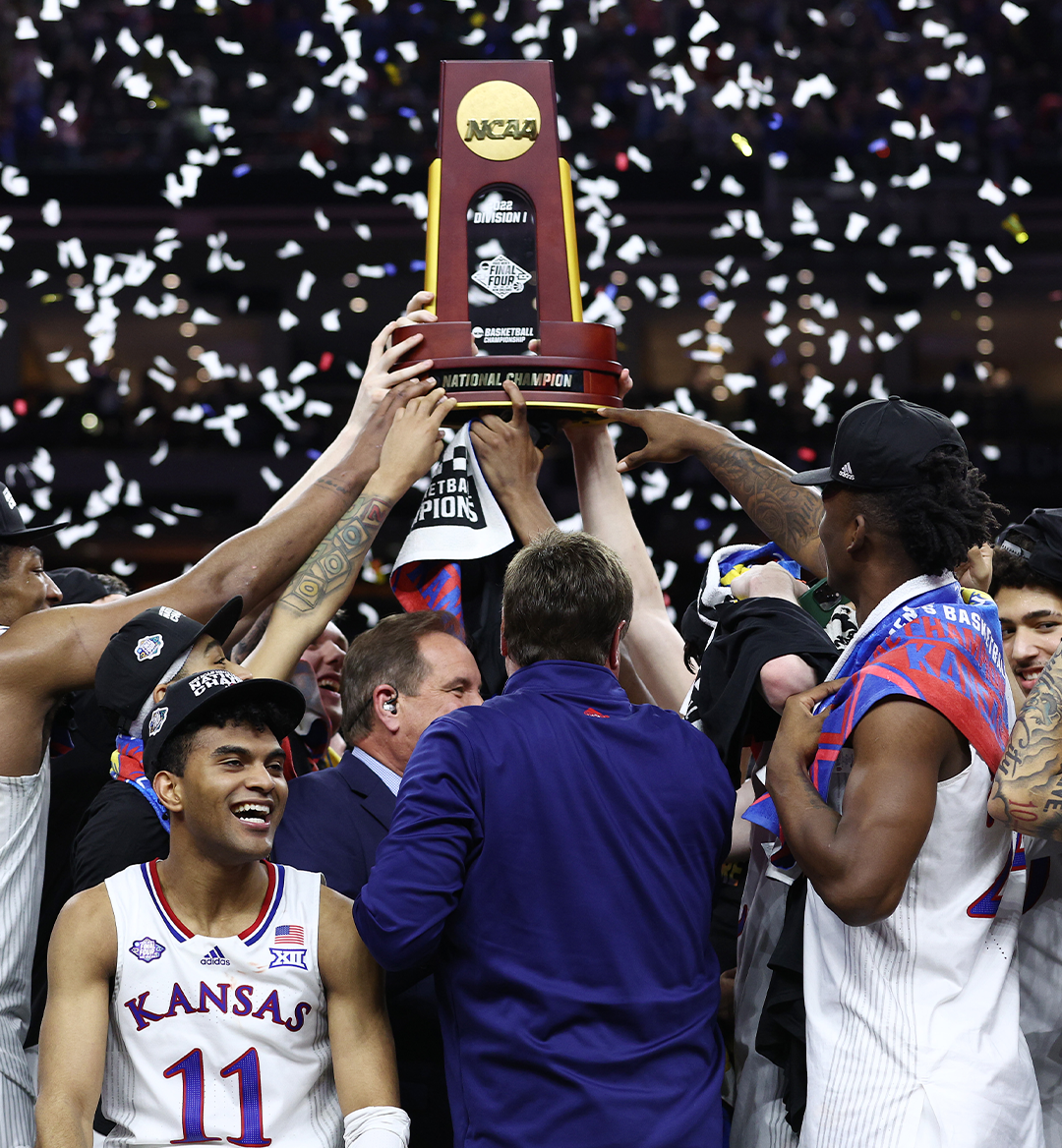 With the Kansas Jayhawks, there’s a sense that inspiration belongs to other people. Let Duke and Kentucky hoard their constellations of future NBA superstars and a-block segments on First Take; let North Carolina have their aw-shucks feel-goodness and Gonzaga their factory farm of number one seeds. The Kansas City Jayhawks’ blood is certainly blue, but it also runs somewhat cold, defined by a ceaseless, nondescript excellence that produces strings of 30+ win seasons that nobody outside of Lawrence especially remembers. If Phog Allen Fieldhouse is considered the Cathedral of Basketball, its ecclesiastics are fairly tempered. On the Plains, general-interest hoops romance doesn’t abound, but titles do.

By beating the North Carolina Tar Heels 72-69 in the national championship game, the Jayhawks played spoiler, denying UNC the satisfaction of a perfect ending. After trailing by 15 points at halftime, Kansas mounted the biggest comeback in the 83 championship games to date.

From the outset, Kansas made a concerted effort to limit UNC’s newly dynamic backcourt of Caleb Love and R.J. Davis. Whereas Duke’s drop coverage got sandblasted by a barrage of pull-up jumpers, Kansas opted to pressure the Tar Heels’ guards by hedging the pick and roll, bringing their big men out to the perimeter to corral Davis and Love before they could turn into open space. And, initially at least, it worked—Kansas jumped out to a 7-0 lead to start the game. Eventually, though, Kansas’s aggressiveness on the perimeter left them exposed on the backend and unable to secure defensive rebounds to close out possessions. Thanks to their dominance on the boards, the Tar Heels went on a rollicking 18-3 run to end the half and seize a commanding 40-25 halftime lead. Kansas was foundering; UNC was playing poised, physical basketball, buoyed by the physical charisma of self-belief. The action: it was live, Tracy.

Still, whatever good vibes that were emanating from the Heels were almost immediately squashed in the second half. Although Kansas coach Bill Self has been dogged by his recent track record of NCAA Tournament underachievements, he flexed his bona fides as a master tactician—give him a dry-erase clipboard and a fine-tipped Expo marker and he’ll give you the world. Struggling to score in the halfcourt against a set UNC defense, the Jayhawks launched a stunning full court assault—they hunted for turnovers by extending full-court pressure; they hurtled down the court after securing rebounds, with Christian Braun stealing six easy points simply by running so hard in transition that UNC’s star big men Armando Bacot and Brady Manek couldn’t get back in time to contest his shots at the rim. Within the first eight minutes of the second half, Kansas had entirely erased UNC’s 15 point lead, knotting the score at 50 apop; less than two minutes after that, a Jalen Wilson and-one put the Jayhawks up by six with 10:08 left.

Like fellow Big 12 team Baylor did two weeks earlier, the Jayhawks cruelly and repeatedly jabbed at UNC’s sole pressure point—an utter inability to handle pressure at the point. Love, who previously buried Duke with 28 points that will redound through Carolina history, fumbled through his worst game of the year, a 13 point, 5-24 disaster-class that was capped off by an air-balled, potential game-tying shot at the buzzer. Davis didn’t fare much better, scraping his way to 15 points on 5-17 shooting.

At their best, the Tar Heels are so dangerous because of their balance; Davis, Love, Manek and Bacot are a symbiotic, versatile foursome that shapeshifts to fit the tenor and demands of the game. Namely, the shared bravura of Love and Davis had been a major galvanizing force that gave the offense a needed jolt of spontaneity and dynamism. But, hounded by Kansas’s inexhaustible supply of wing defenders, Love and Davis were robbed of the privilege of possibility. With Bacot hobbled by a gimpy ankle and sharpshooter Brady Manek unable to shake free on the perimeter, Love and Davis had no choice but to repeatedly indulge their worst impulses, hoisting shots that they only had the faintest chance of making.

Conversely, Remy Martin, Kansas’s ace improviser, thrived. The preseason Big 12 player of the year, Martin struggled with injuries and inconsistency for the entire regular season. He presented a hugely important conditional—he’d be difference-maker if he could subsume his ego for the good of the team; he’s a superstar if he could rediscover the form that made him one of the Pac 12’s all-time-great scorers during his four years at Arizona State; Kansas could be a contender if Martin elevates them to that level.

In the tournament, Martin finally rediscovered the magic that makes him such a special player. Over Kansas’s six tournament games, Martin led the team in scoring with 14.0 points per game despite playing just 23.8 minutes per game. Even though Ochai Agbaji was Kansas’s undisputed star and David McCormack iced the game with two hook shots over Manek, Martin was functionally Kansas’s closer against UNC, hitting three go-ahead threes in the game’s final ten minutes and scoring or assisting on five of Kansas’s last eight field goals. He may not have been the sole reason Kansas won, but it’s hard to imagine that they’d win without him.

It’s tempting to cite that as the difference—Martin found ways to succeed within his team’s structure while Love and Davis dismantled theirs—but that elides and oversimplifies the thrill of watching 10 college students try to navigate a ludicrously high-stress situation without their brains combusting on national television. Here was a display of such supreme weirdness that it turned a prosaic matchup of two upperclassmen-heavy teams with not much high-end, NBA-caliber talent into an indelible moment in college basketball history. The game was the kind of panicked, delirious contest that only exists in the NCAA Tournament, an exposed-nerve pressure test that defies pithy catchphrases or easy lessons: UNC shot 31.5 percent and almost won; the Jayhawks got outrebounded by 20 boards and nearly choked away the game with an utterly head-empty turnover; Carolina’s three best players all sprained their ankles; a guy named Puff scored 11 points off the bench and then yakked on the court. And somehow, in the end, the best team in the country won the championship. This is March.