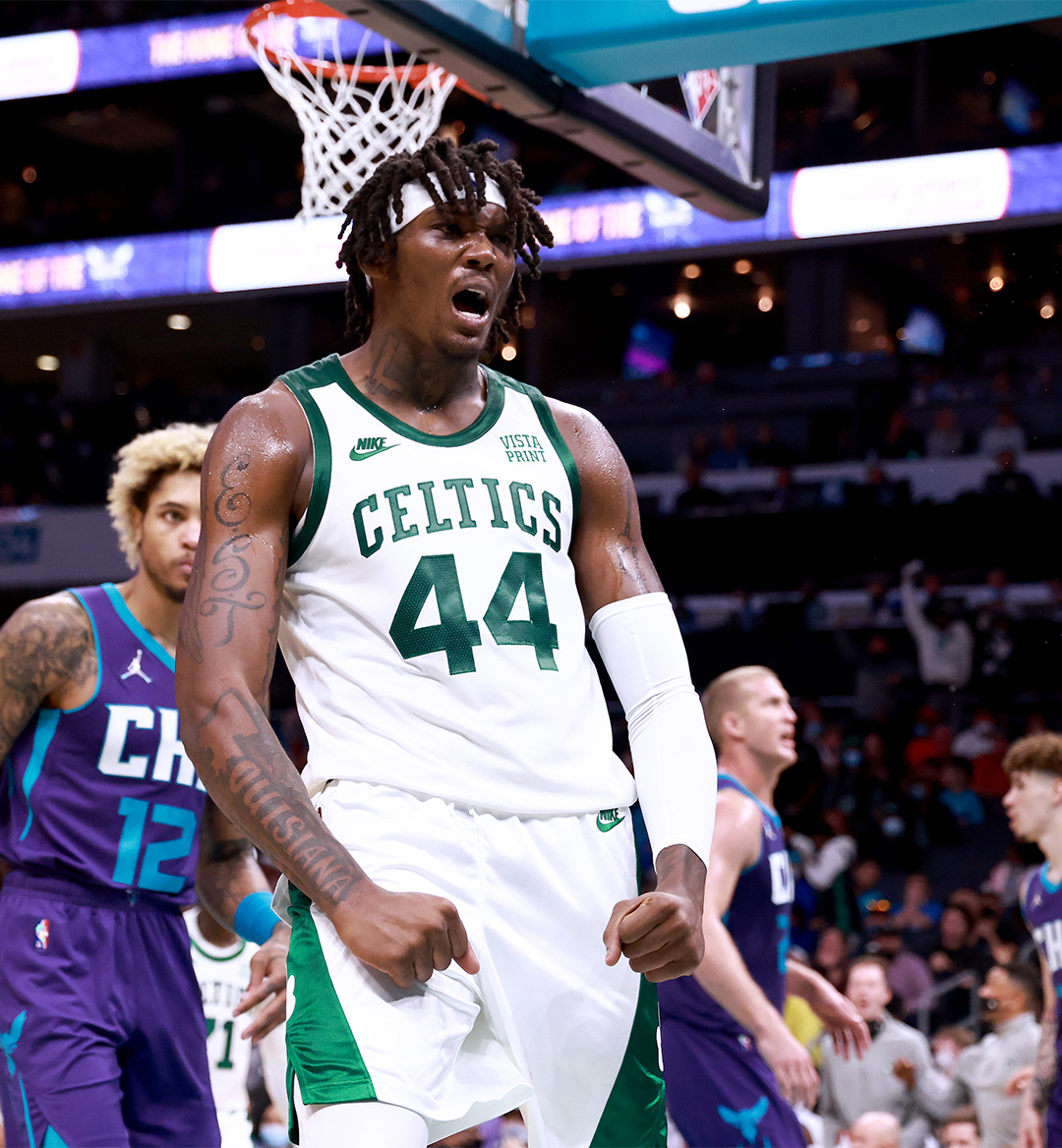 For the first three months of the season, the vibes in Boston were decidedly off. Through 36 games, the Celtics lurched to a 17-19 record. Their offense was stale and bad, non-existent beyond Jayson Tatum’s and Jaylen Brown’s solipsistic scoring. Their defense was similarly middling, felled by a dearth of players who could thrive within the bounds of conventional NBA defense. Basic rotations confounded them: help defenders were too slow or small or apathetic to bother rolling bigs; off-ball switches proved to be unsolvable riddles; closeouts just, like, didn’t happen. Despite the presence of a fearsome shot blocker in Robert Williams, they couldn’t establish a true sense of identity.

Since January 1st, though, the Celtics have played better defense than just about anybody ever. Winners of 16 of their last 22 games, the Celtics have surrendered just 102.9 points per game during that stretch. The key? They’ve let Williams get weird. Whereas Williams previously functioned as a fairly mundane big, anchored in conservative drop, he’s now used as an all-terrain detonator. Paradoxically, they’ve dramatically improved their rim protection by shunting WIlliams, their best rim protector, out towards the perimeter. Since the new year, the Celtics have allowed opponents to make just 63.5 percent of their shots at the rim, compared to 67.1 percent prior.

In basketball parlance, the weakside defender closest to the basket is known as the “low man” or “MIG” (Most Important Guy); it’s their job to serve as the first line of help defense, stepping up to challenge shots at the rim while also remaining mindful of their original assignment (oftentimes a shooter in the corner). The low man is the unseen ligamenture that determines whether a defense coheres or collapses.

Accordingly, the Celtics have redesigned their defense so that Williams can occupy permanent low man-dom, meaning that he’s often tasked with guarding shooters in the corner rather than tussling opposing big men. In this new capacity, Williams has transformed from the Celtics’ lower-case most important guy into their upper-case Most Important Guy, contesting more shots than a center traditionally would be able to. Shots that were once easy layups over too-small grunts like Romeo Langford are now engulfed by Williams.

As the low man, Williams declares dominion over an entire side of the court. Not only can Williams block shots at the rim, he retreats back out to the perimeter to contest jump shots—Williams contests 4.25 threes per game (putting him in the 80th percentile per BBall Index) and allows just 0.82 points per spot-up, the lowest mark of any Celtic who has defended more than 100 of those situations.

Beyond simply being asked to stand in a different place sometimes, Williams is increasingly trusted to switch onto dangerous scorers and ball-handlers. Although Williams lacks the footspeed to hang with guards full-time, he presents scorers with one major complication: it’s   basically impossible to get a clean shot over him because he can jump super high and his 7 '5 wingspan blots out the horizon.

Even if the Celtics aren’t the first team to deploy a jumbo-sized low man (Cleveland does so with Evan Mobley and Milwaukee does so with Giannis Antetokounmpo), they’re unique in that their success feels somewhat replicable. Their stinginess isn’t born from any kind of one-of-one superfracted mega-talent; rather, it’s the result of skilled personnel used wisely. While Mobley and Antetokounmpo are athletic mutants, Williams is awesome in a more familiar way—it’s easy to imagine Mitchell Robinson or Daniel Gafford or Mo Bamba or Jalen Duren occupying this same role.

In this sense, Boston’s scheme is quietly radical. With Williams untethered from the defensive responsibilities of a nominal center, the Celtics are at the forefront of the new defensive vanguard burbling in response to the spread pick-and-roll that defines modern offense. The romantic idea of the lionhearted, stalwart defensive stopper still persists, but it’s no longer an accurate representation of how basketball is played. Defense is a five-man exercise in crisis management; any one-on-one staredown is merely a prelude to the following series of rotations.

By putting Williams away from the initial play, the Celtics ensure that he’s in position to disrupt the offense’s all-important second and third actions. This is the kind of quasi-zone that defenses have been trending towards over the last few years—Williams doesn’t so much guard a man as he patrols a space. He’s a universal principle that’s been weaponized into singular production.

The Celtics are introducing the sport’s future and still dominating its present. For years, people have talked about positionless basketball as a kind of metonymy for some Cruyffian vision of Total Basketball in which five interchangeable 6’7 super-humans fly around the court in perfect synchronicity. Instead, it’s simply come to mean that players are no longer bounded by geography or hierarchy—there’s still tremendous utility in having a center or a point guard or whatever, as long as they have the fluidity to thrive within a variety of contexts. Just as Viagra outgrew its original usage as a blood pressure medication, Williams symbolizes a reimagination of where rim protection comes from and how it’s conceived. The only rule is that it has to work.