Anthony Edwards Is Living Up to the Hype 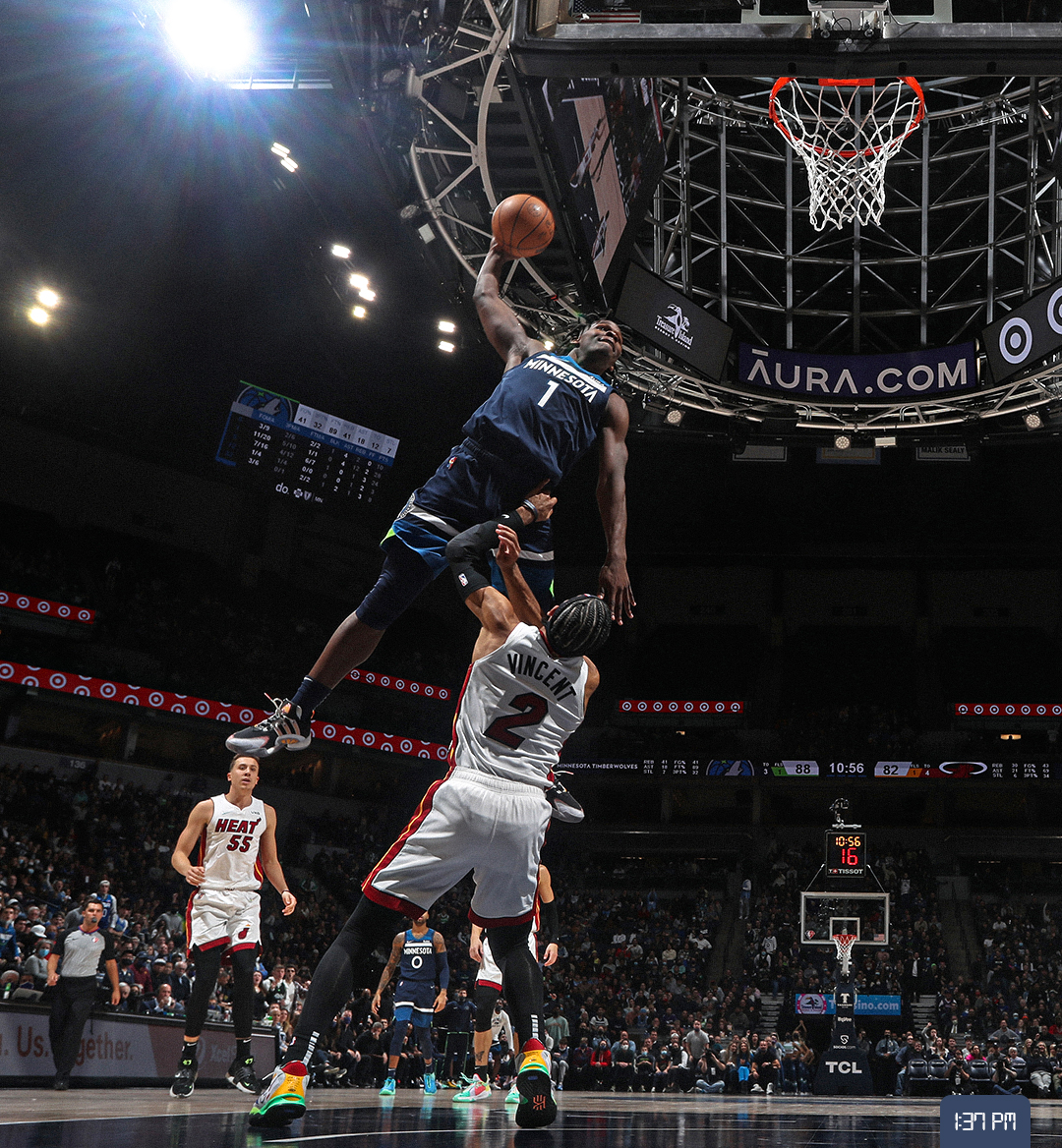 Since the Minnesota Timberwolves hardly capture the public imagination, Anthony Edwards is most often seen through Twitter or Instagram highlights. Perhaps already the NBA’s preeminent dunker, Edwards collects skulls like they’re NFTs. His press conferences showcase his unforced charisma; in an era where nearly every basketball player is media-trained into PR-speak fluency by the time they’re 16, Edwards talks and acts like a real person and not an automaton. But what separates Edwards from the likes of other NBA Twitter darlings like Jamal Crawford or JR Smith is that he’s not just a fun oddity; he’s really fucking good.

Before he spent the weekend toiling in Covid quarantine and, presumably, watching Selling Tampa and trying to figure out if he can still smell, Edwards became just the seventh player in NBA history to score 2000 career points in his first 100 games. Too, he became the youngest player ever to make 10 three-pointers in a single contest and his 22.3 points per game put him on pace to have one of the most prolific age-20 seasons ever. Even as the league adopts a more holistic approach to player evaluation, Edwards represents the primacy of bucket-getting. The 2020 #1 overall pick plays with a sudden muscularity, all coiled strength and vectored momentum. Switchability and manipulative passing are important, but Edwards’s explosive scoring ability inherently simplifies the game the same way that playing on rookie difficulty simplifies Madden.

If the fundamental goal of NBA defenses is to make offense harder, Edward guarantees his opponent’s failure. The most striking aspect of Edwards’ game is its ease. Slashing to the rim seems elementary because no defender is fast or strong enough to stay in front of him and step-back three-pointers appear improbably wide-open because defenders garrison themselves in the paint to stop his drives. If there’s a proper positioning from which to guard Edwards, one where you can contest a jumper without being dusted by his drives, it’s yet to have been discovered. Despite his hefty volume and less-than-sparkling efficiency (his true shooting percentage is a touch below league average), nothing about Edwards feels forced—he’s not chucking shots as much as he’s capitalizing on opportunities to shoot. Notably, he’s emerged as a fastbreaking terror—his 6.0 transition points per game are third most in the NBA and his 1.32 points per possession on those attempts puts him in the 85.7 percentile, according to Synergy Sports.

In this sense, Edwards is part of the revitalization of the shooting guard position. Whereas athletic, scoring shooting guards once ruled the NBA, this archetype has kind of fallen out of fashion. In recent years, players who traditionally would be considered shooting guards have either been entrusted with primary ball-handler duties (James Harden, Bradley Beal, Donovan Mitchell) or shunted out towards forward-dom (DeMar DeRozan, RJ Barrett, Jimmy Butler).

Conversely, Edwards—alongside Devin Booker and Jalen Green—is a traditional shooting guard within the lineage of Kobe Bryant or Vince Carter. Like his predecessors, Edwards is an offensive force who demands heavy usage and touches but has such clarity of purpose as a scorer that he operates best next to another ball-handler. Early 2000s nostalgia has gripped popular culture: baggy jeans are in style, Britney Spears is in the news, Spiderman (nay, Spidermen) dominates the box office, and shoot-first shooting guards are putting up numbers.

For the possibly-good Timberwolves, Edwards’s continued development is the key to them dropping that pesky possibly qualifier. After years of wandering around the NBA’s endless middle, the Timberwolves have designs on breaking into the bottom of the top. This year, the Timberwolves have positioned themselves as a probable play-in team, with a 15-15 record and a slightly positive point differential through 30 games. With Edwards, Karl-Anthony Towns and D’Angelo Russell soaking up most of the offensive responsibility, the T’Wolves have surrounded their star trio with rabid role players who can execute the frenzied defensive scheme that was installed by new head coach Chris Finch. So far, so good—Minny has the 11th best defensive rating in the NBA and has forced more turnovers than any other team.

Still, the ultimate success of this two-tiered roster construction (three scorers and umpteen hustling role players) is contingent on what kind of player Edwards can become. Towns is the greatest big man shooter of all time—according to him and also, like, stats— but big men generally struggle to be the engine of potent offenses; Russell is a stylish point guard, but his drives to the rim are rare and noteworthy, like an eclipse. Edwards, though, is still years from rounding into his final form; the difference between the Timberwolves wallowing in years of seventh seeds or them vaulting up into home-court contention is whether Edwards becomes an All-Star player or an All-NBA one. It’s undeniable that he’s a good player—the exciting part is discovering just how good he can become.