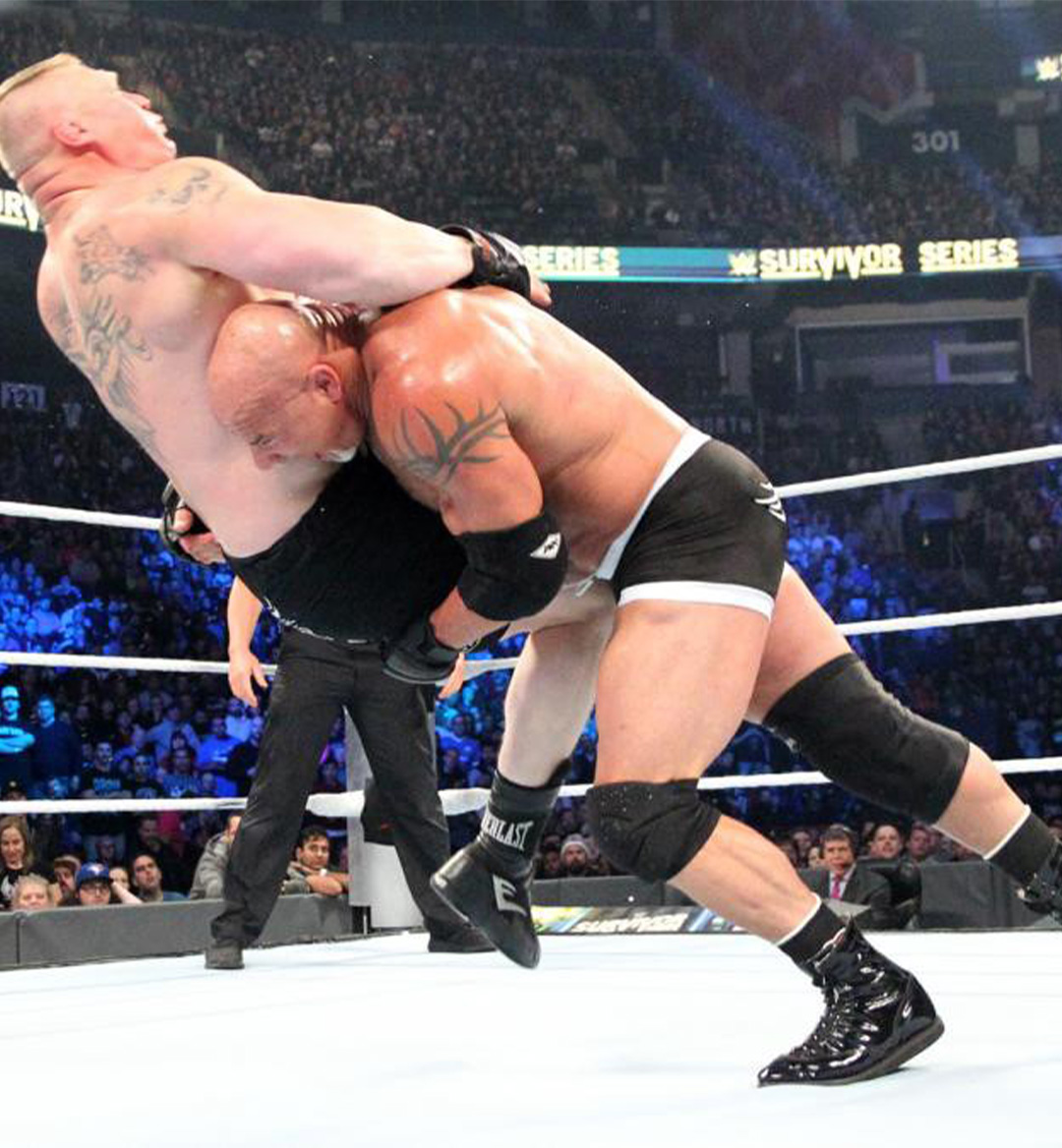 Ask anyone that watches football what gets them to jump out of their seat and they’ll give you multiple answers - the game-winning touchdowns, the end zone victory dances, and successful plays that gain tons of yardage will most likely be among them.

Another aspect of the gridiron sport that makes fans go wild is its unrelenting physicality. A whole room of football fans will wince and lift their knees up simultaneously at the sight of a player getting knocked silly by a devastating leaping tackle. The same can be said about wrestling fans whenever they witness someone getting cut in half by the infamous signature move known as the Spear.

Once a wrestler gets down on all fours, runs full steam ahead, and cuts right through their opponent's midsection, you’re bound to get excited about what you just witnessed. Today’s wrestling landscape is filled with men and women that rely on that move to get the job done. But there’s only a select few that pull off that move with perfect precision and make it look as devastating as possible.

We just so happened to have found eight of them and are here to remind you all of who exactly are the masters of the Spear maneuver in all of professional wrestling.

What we have right here is the originator of one of the most devastating maneuvers of all time. When Goldberg came onto the scene, his magnetic aura caught everyone’s attention. He always managed to pop the crowd with the one-two punch of a ferocious Spear and an equally vicious Jackhammer. “The Man” pulled off the Spear to perfection and made a habit out of practically destroying anyone he landed it on. Watching him pull it off on cruiserweights was always satisfying (the one ‘Berg caught Kwee Wee with while the smaller man was in midair is a definite highlight!). Goldberg’s Spear is the stuff of legend - it looked the best of them all and caused a generation of wrestlers after him to add it to their arsenal.

GORE! GORE! GORE! The “Man-Beast” Rhyno took the Spear and made it look even more devastating than it already was. Rhyno added that extra oomph to the move and always looked like he just caused all of his victims the most severe stomach pain. Rhyno’s Gore was especially brutal during his ECW stint since he usually did it right through his latest foe into a table. It was especially mind-blowing when he carried someone on his shoulders and ran them right into said table with that same Gore of his. The Gore is on equal footing when compared to Goldberg’s version of the Spear. It’s such a shame that we never got a match between the two - the Spear vs. the Gore would have been quite the sight to see!

During Bobby Lashley’s first stint as a WWE Superstar, he developed quite the affinity for ending his foes with a well-placed Spear. It looked decent enough at first, but then he left the WWE to ply his trade in Total Nonstop Action and made the move all his own. Lashley’s TNA development coincided with his stronger mic skills, a more fearsome persona, and a far more cataclysmic rendition of the Spear. Nowadays, Lashley still utilizes that version to great effect. The way he runs through his opponent and pulls off a cool front flip after landing it never gets old. That extra move on the end of every Lashley Spear gives it that old razzle-dazzle that makes it one of the very best.

Even during those days where the crowd was clearly a 50/50 split when it came to how they felt about Roman Reigns, no one could deny the fact that he had a badass Spear. You damn sure had to acknowledge that fact! The “Tribal Chief” always gets the crowd hype whenever he lets out a pre-Spear howl. And once he goes flying through the air to dominate whoever’s on the opposite side of the ring, the end of the match is usually not too far behind. Reigns’ Spear has never looked bad, to be quite honest. We damn near flipped our lids that one time Reigns gracefully made his way through the air right over Sasha Banks to finish Rusev with an impressive Spear. As you can tell, we just can’t get enough of Reigns’ version of the popular move.

Big E is a huge fan of beefy men “slapping meat.” Hearing him say that out loud sounds crazy, but you’ll quickly get all that sexual innuendo once you see Big E obliterate someone in the squared circle. Big E has a vast moveset filled with a power-based offense that always looks awesome in action. One of his biggest maneuvers is the signature Spear he pulls off by shoving his shoulder into anyone standing on the ring apron. We always tense up whenever he does it because it looks so risky - Big E always goes full force whenever he pulls off his Spear and usually collides with the mat below him to make a sickening thud sound ring through the arena. Even though we always get pretty scared to watch Big E pull his Spear off, we always get excited to watch that painful sequence unfold.

Lucha libre fans know him well as Rickey Banderas. During his short stint in TNA, American wrestling fans came to know him better as Judas Mesias. But his popularity truly skyrocketed once he donned a mask as Lucha Underground’s Mil Muertes. The now-defunct wrestling show provided a platform for Muertes to gain notoriety due to his monster-like stature and domineering approach to wrestling. Whenever Muertes hits the ropes, wrestling fans already have a clue as to what’s setting up. And nine times out of 10, it’s his soul-crushing Spear known as the “Reaper’s Trident.” “The Man of 100 Deaths” looks like an unstoppable beast every time he decides to finish someone with his vicious version of the Spear.

Do you know what’s an “Absolute” truth? Former NWA star and current AEW roster member Ricky Starks has a damn good Spear within his arsenal. Everything about Starks is amazing, so that statement should come as no surprise. We made a habit out of watching AEW Dark every time Starks was competing just so we could watch him pull off one of two finishers - the Roshambo and his beautiful Spear. The way he sets it up is always so dope because he usually follows right behind his running opponent to confuse them before he goes airborne to tackle his opponent right into a loss. The one Sparks landed off Brian Cage to win the FTW Championship definitely made us appreciate “Stroke Daddy” and his Spear even more than before.

AY, DON’T SLEEP! When Kaitlyn was an active member of the WWE roster from 2010-2014, she may have gone under the radar for some. But everyone couldn’t help but pay attention a little bit more whenever she landed her finisher. Kaitlyn’s more athletic build allowed her to be presented as a fearsome competitor in comparison to her smaller foes. We got to see her showcase her advantages over her rivals whenever she brought out that nasty Spear of hers. AJ Lee always sold it the best, but every other woman that got finished by Kaitlyn’s Spear looked equally impressive. We miss Kaitlyn to this day and are hoping we get to see her Spear the hell out of someone in the near future. We’d like for that newest victim to be Charlotte Flair - SHOW HER HOW TO DO A PROPER SPEAR, MISS K!