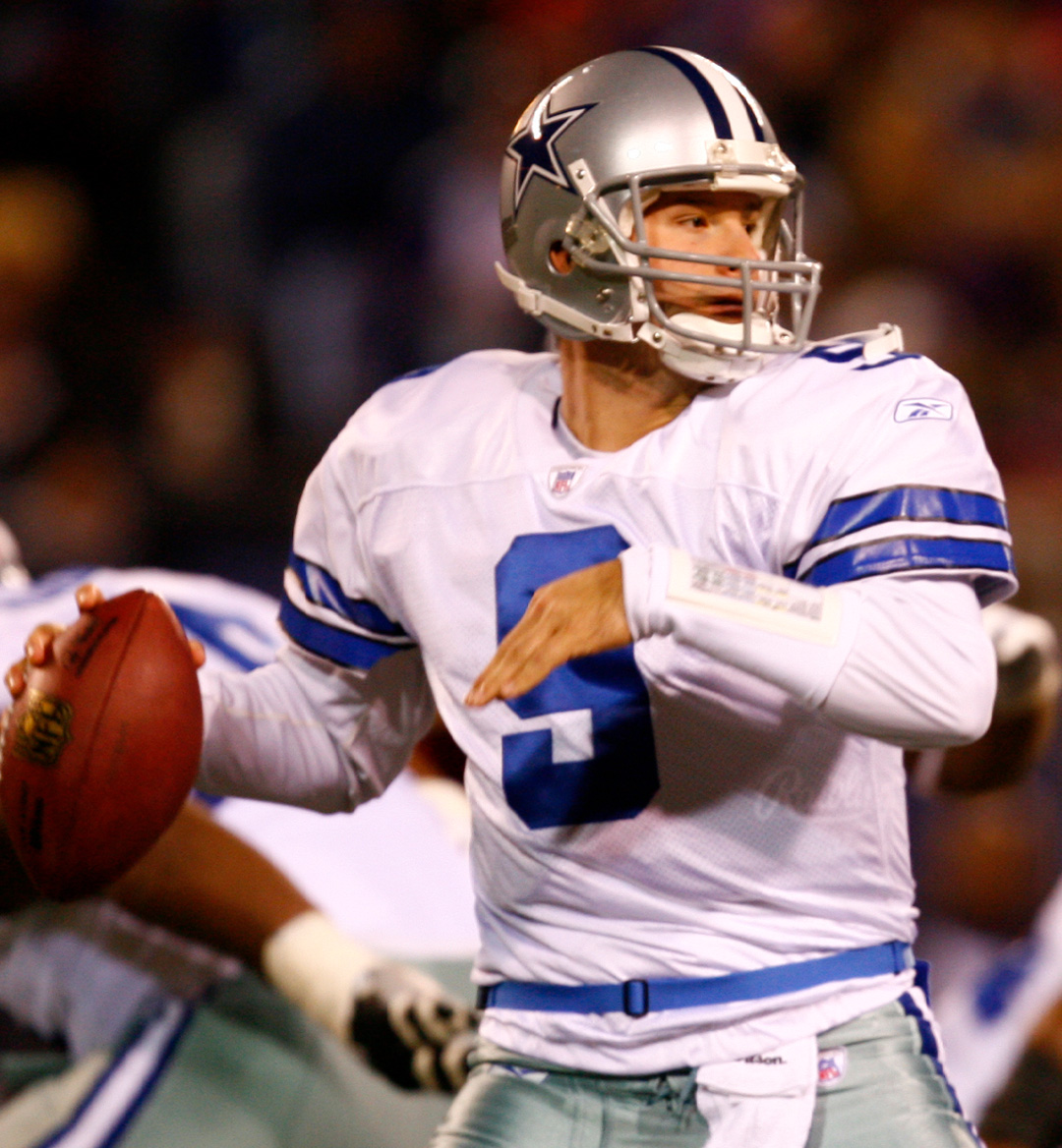 Numerous NFL greats did not take the traditional route to achieve their football dreams. While many enter the league through the draft, some do not get selected by one of the 32 teams and must prove themselves and get signed as free agents.

They might have had to go to the Arena Football League, Xtreme Football League, or even NFL Europe back in the 1990s and early 2000s, but they took those avenues and made lemonade out of lemons, sort of speak.

We here at ONE37pm elected to name who we think are the top 30 undrafted NFL players of all-time.

Antonio Gates calls it a career.

Despite a standout career with the Golden Flashes, the 6-foot-4, 255-pounder was too short of having any NBA career, so he chose to try out for the NFL and went on to be one of the most extraordinary tight ends in NFL history.

Gates has the most touchdowns of any tight end in NFL history (116) and was named to the Pro Bowl eight times.

He will most likely be inducted into the Pro Football Hall of Fame in 2025. Gates decided to retire before this past season after playing 16 years in the NFL.

Willie Brown was not a coveted prospect after his time at Grambling University. Initially signed by the Houston Oilers, then cut, but Brown got his foot in the door of the NFL with the Denver Broncos and became a starter in his rookie season.

Traded to the Raiders in 1967, Brown became a legend with the silver and black and would turn himself into a shutdown cornerback.

Brown also won three Super Bowls with the Los Angeles/Oakland Raiders (XI, XV, XVIII). Completing his career with 54 interceptions, he was a four-time Pro Bowler, five times All-Star, and was inducted into the Pro Football Hall of Fame in 1984.

John Randle signed with the Minnesota Vikings after going undrafted out of Texas A&M-Kingsville, a Division II school in the Lone Star Conference.

The Vikings decided to take a chance on Randle, whose older brother Ervin Randle played eight seasons in the NFL as a linebacker with the Buccaneers and Chiefs from 1985 to 1992.

Randle did not make the Vikings regret their decision and went on to become one of the best defensive linemen of the 1990s, and he had no problem letting the opposition know about it.

He was named to seven Pro Bowls and registered 137.5 sacks in his career, tied for ninth place in NFL history. He was inducted into the Hall of Fame in 2010, his second year on the ballot.

Night Train had an exciting path into the NFL after spending a year at Scottsbluff Junior College.

Before attending Scottsbluff, Lane enlisted in the United States Army in 1948 and served for four years, according to Newspaper.com.

Lane worked in an aircraft factory in Los Angeles after leaving the army, lifting a heavy sheet metal from a bin and placing it in a press, according to Newspaper.com.

In 1952, he got an opportunity to play with the Los Angeles Rams as a defensive back.

In his first season in the league, he set an NFL record with 14 interceptions and is currently ranked fourth in league history with 68. He only trails Paul Krause, Emlen Tunnell, and Rod Woodson.

In 1974, He became a member of the Pro Football Hall of Fame.

Emlen Tunnell served in the Coast Guard during the Second World War and then finished his college career at the University of Iowa at age 24.

He would go undefeated but would later sign with the New York Giants. He would be the first black player to play in the organization and became an impact player on New York's defense.

During his rookie season, he would grab seven interceptions and finished his career with 79 picks. That is the second-most in NFL-history, and he was the first African-American inducted into the Professional Football Hall of Fame in 1967.

Emmitt Thomas went to Bishop's College and was signed as a free agent by the Kansas Chiefs.

He played from 1966-1978, and his Hall of Fame career included 58 interceptions, a Chiefs franchise record, and five Pro Bowl appearances.

After playing for a long time, he had a long career as an NFL coach, winning two Super Bowls on the sidelines with the Washington Redskins in 1987 and 1991. He retired after the 2018 season.

Some might disagree, but kickers are football players, and Lou Groza was a trailblazer on the field. He also played on the offensive line but made a name for himself as a kicking specialist.

He was a part of four championship teams as a member of the  Browns and was appointed the Sporting News NFL MVP in 1954, the award's first recipient. College football also named their best kicker award after Groza.

However, shoulder injuries from his time at USC left him undrafted. Without a letter he wrote to legendary coach Vince Lombardi, Wood may never have gotten to the NFL. Thank goodness he did.

Wood received his induction into the Hall of Fame in 1989.

But he was not drafted back in 1981. However, he signed with Washington for training camp.

He would go on to be named four Pro Bowls and the Pro Football Hall of Fame.

Bill Willis is in the College and Pro Football Hall of Fame simultaneously, but he hardly even had a career with the Cleveland Browns.

At 6 feet 2, 213 pounds, an undersized defensive lineman also played in an era when black football players' opportunities were limited.

Willis started as a coach when he tried out for and made the Cleveland Browns at age 24. He ended as a four-time All-Pro and won the NFL championship in 1950.

During Priest Holmes's career in the NFL,  he was one of the most feared running backs in football.

Holmes was passed in a stacked University of Texas backfield but blew up with the Kansas City Chiefs under coach Dick Vermeil.

Holmes holds the Chiefs' franchise record for touchdowns, led the NFL in the race in 2001, and was the NFL's offensive player of the year in 2002.

Marion Motley was another NFL player who became a star, and they co-broke the NFL's color barrier by joining the Browns and Bill Willis in 1946.

Motley was primarily a full-back who led the NFL by rushing like a 30-year-old for the Browns champion in 1950. His 4712 yards is number six in Browns' history, and he was inducted into the Hall of Fame in 1968.

During the 1972 season, Larry Little started every game for the undefeated Miami Dolphins team and helped them back in 1973.

Little was named a five-time All-Pro, and he was inducted into the Pro Football Hall of Fame in 1993.

Nate Newton was a five-time Pro Bowler and mainstay on one of the NFL's best offensive lines with the Cowboys, who won three championships in the 1990s.

But every NFL team overlooked the All-MEAC right tackle out of College.

The Washington Redskins cut Newton when he couldn't make weight in training camp in 1983. Jimmy Johnson helped him figure it out in Dallas, and the rest is history.

London Fletcher was just 5 feet 10 inches tall, but after an exceptional career with John Carroll, a Division III school in Ohio. The linebacker fully profited from his NFL opportunity with the Rams as a free agent not drafted in 1998.

He was one of the 1999 Rams Super Bowl champion team leaders and went to four Pro Bowls, all with the Washington Redskins.

Jeff Saturday was excluded from the NFL Draft in 1998 due to his inadequate size. Despite this, the Ravens signed the 6-2 feet, 295 pounds lineman but released him before he played in a Baltimore uniform.

He then worked in retail before finding a home with the Indianapolis Colts, where he became a six-time Pro Bowler and twice All-Pro as a protector of Peyton Manning.

Now working in broadcasting, Saturday has been inducted into the Colts’ Ring of Honor and is still eligible to make the Pro Football Hall of Fame.

Michael Bennett did not get drafted after a tenuous career in College. The Seahawks signed him as a free agent in 2009, then released him after a couple of months, and the Buccaneers took him over.

After four seasons at Tampa, he went back to Seattle. He became one of the NFL's most disruptive defensive linemen, Anchoring the Seahawk defense line for five seasons, earning three Pro Bowl appearances, and helping Seattle win its first Super Bowl.

In 2018, the Seahawks traded Bennett with the Eagles, which dealt him to the Patriots a year later.

After ten years, Bennett announced his retirement before the 2020 season due to the COVID-19 pandemic and wanted to spend time with his family.

A rising star in the league, Robby Anderson finished second all-time in receiving yards at Temple University. He went undrafted but was signed by the New York Jets, where he started 62 out of 64 games in a Jets uniform. Before the 2020 season, he signed a two year deal with the Carolina Panthers, and over his five years in the league, he has 4155 yards and 23 touchdowns.

Chris Harris Jr. went undrafted in 2011 out of Kansas but was signed by the Denver Broncos. It was a great decision because he made four Pro Bowls and helped them win a Superbowl. He was named to the 2010s All-Decade Team, and throughout his ten seasons in the league, he has snagged 22 interceptions.

Baldwin went undrafted out of Stanford in 2011, but the Seattle Seahawks scooped him up and paired him with Russell Wilson, and the pair hooked up for 49 touchdowns in seven seasons. Baldwin was a key piece for the Seahawks that helped lead the Seahawks to their first and only Super Bowl win.  Unfortunately, he suffered a career-ending injury in 2018 and was forced to retire.

Bart Scott went undrafted out of Southern Illinois University and played seven seasons, but was given a chance out of College by the Baltimore Ravens, where he would play from 2002-2008. The Jets would pick him up after that, where he played for four seasons, and he would finish his career with 538 tackles and 25 sacks.

Victor Cruz did not get drafted out of the University of Massachusetts Amherst but was picked up by the Giants, where he quickly made a name for himself. Every time he scored one of his career 25 touchdowns, he started salsa dancing in the endzone, quickly becoming his signature move. He would win a Super Bowl with the Giants during his six seasons in the league before he had to retire due to injury.

After not being selected in the 2011 NFL Draft out of the University of Oregon where he played Chip Kelly, Paysinger signed with the New York Giants as a free agent. As a rookie, Paysinger did not get much playing time. In 15 games, he racked up just 12 tackles.

However, he was a part of the Super Bowl XLVI winning team in 2012.  Over the next three years with the Giants, he accumulated 104 tackles in 47 games. He registered his first career sack in 2014, and in 2015 he signed a one-year deal with the Dolphins and re-signed in 2016.

During his time in Miami, he racked up 57 tackles. He would retire in 2017 after brief stints on the New York Jets and Carolina Panthers practice squads. After his football career, he moved onto acting, and he has been a major part of the CW hit series All-American, which is based on his life at Beverly Hills High School.