The 13 Best Performers in WrestleMania History 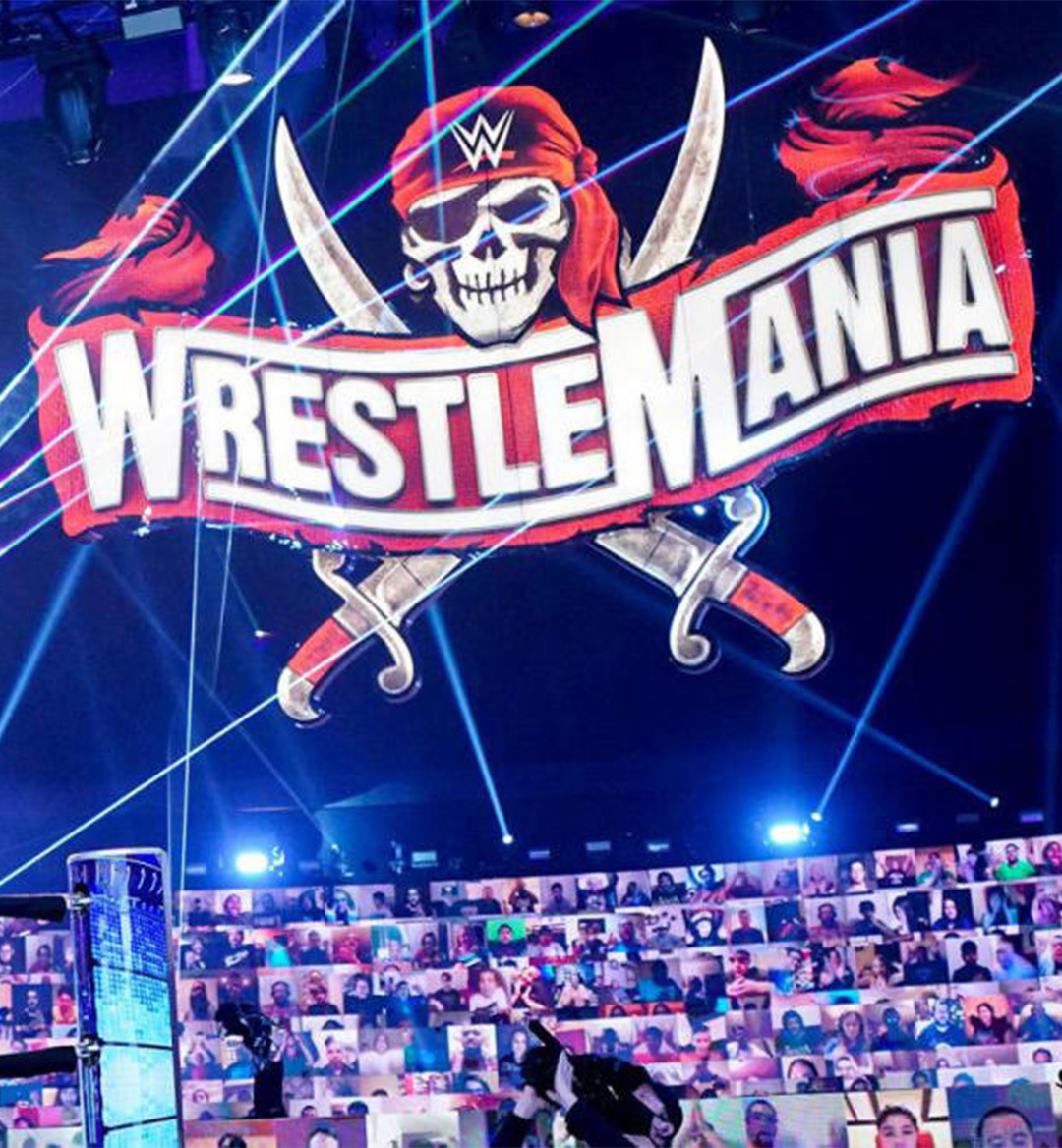 Once WrestleMania season arrives, the best/worst of debates open up once again. Hop into a random wrestling Reddit thread and you’ll quickly be overwhelmed by spirited discussions about the best/worst WrestleMania’s, flashiest stage designs, dopest entrances, etc. We’ve already gotten in on all the fun since we’ve listed all the WrestleMania events ranked from worst to best. But we’re not done adding our own two cents to all those heated ‘Mania disputes.

WWE’s “Grandaddy of ‘Em All” has played host to the greatest wrestlers of all time. And you can usually count on both hands the number of Hall of Famers that have produced the finest matches at WWE’s biggest event of the year. There are 13 superstars that we’ve chosen as WrestleMania’s most celebrated performers due to their ability to bang out a good to great match every time the bell rings.

Anytime you bring up WrestleMania’s greatest matches, the GOATs listed below will surely come up during that passionate discourse.

The quintessential face of the WWE that pretty much dominated an entire decade and then some has been a WrestleMania staple. His first appearance at the show of shows (‘Mania 19) was merely a pre-show freestyle (that was supposed to be a rap battle against Jay-Z and Fabolous, by the way). But ever since then, Cena’s gone head to head with WWE’s biggest stars on the biggest stage of them all. While most of his ‘Mania matches have ranged from lackluster to passable, Cena definitely has a few gems to look back on and be proud of. His ‘Mania 20 bout with the Big Show was halfway decent, his ‘Mania 26 match with Batista was a fun heated encounter, and his triple-threat performance against Triple H and Randy Orton at ‘Mania 24 hit all the right notes. But Cena’s best ‘Mania matches are easily the ones he had against Shawn Michaels (‘Mania 23) and Rusev (‘Mania 31).

The living embodiment of the “Cult of Personality” had quite the ‘Mania run when it comes to in-ring quality. CM Punk found himself competing in three back-to-back Money in the Bank ladder matches that were all pretty awesome in their own right. After those multi-man wars, Punk went on to take on a few bonafide legends in singles encounters. His ‘Mania 26 bout with Rey Mysterio was decent and the same can be said for his ‘Mania 27 match with Orton. But it’s his ‘Mania 28 WWE Championship banger with Chris Jericho and his attempt at ending The Undertaker’s streak at ‘Mania 29 truly stands out as Punk’s greatest ‘Mania performances.

The “Legend Killer” turned “Apex Predator” may not have the strongest array of ‘Mania matches to his name. But the ones that we return to on a regular basis hold the distinction of presenting incredible in-ring performances and history-making moments. His ‘Mania 21 match with The Undertaker was a lot better than expected, plus it featured one of the coolest RKO counters of all time. Orton also competed in three triple threat matches at ‘Mania 22, ‘Mania 24, and ‘Mania 30 respectively - the first one was solid even though it was short, the second one was quite epic, and the third one gave fans the ending they’ve wanted for oh so long. The strongest ‘Mania performances from Orton easily come from his MITB ladder match participation at ‘Mania 23, the Evolution vs. Rock ‘n’ Sock Connection Handicap tag match at ‘Mania 20, and his magnificent RKO ending clash with Seth Rollins at ‘Mania 31.

You gotta hand it to the “Macho Man” - Randy Savage will forever be attached to the longstanding history of ‘Mania for two major reasons. His all-time ‘Mania 3 classic against Ricky “The Dragon” Steamboat is still talked about to this very day and is regarded as one of the best (if not THE best) Intercontinental Championship matches of all time. Then you have Savage’s ‘Mania 7 barn burner against the Ultimate Warrior, which also happened to give fans one of the most emotional post-match outcomes anyone has ever seen. Besides those two history-making bouts are a few other standouts, such as Savage’s bloody brawl with Ric Flair at ‘Mania 8, his championship feud ender with Hulk Hogan at ‘Mania 5, and his better than expected Falls Count Anywhere clash with Crush at ‘Mania 10.

Bret Hart’s the self-proclaimed “Excellence of Execution” for good reason - when it comes time to pull off an impressive in-ring production at ‘Mania, Bret’s a pro at it. He’s been involved in some battle royals and tag team matches here and there. But his best bouts have come our way thanks to his impressive singles run. He produced one of the more underrated IC Championship matches in ‘Mania history against “Rowdy” Roddy Piper at ‘Mania 8, put on an entertaining closer with Yokozuna at ‘Mania 10, and went all the way against Shawn Michaels during their Iron Man Match at ‘Mania 12. But his best singles ‘Mania matches come courtesy of his amazing opener with his brother Owen Hart at ‘Mania 10 and his career-defining Submission Match with “Stone Cold” Steve Austin at ‘Mania 13.

“The Game’s” ‘Mania win-loss record is definitely a downer. But at least Triple H goes down swinging whenever the big lights at WWE’s flagship event are on. The Undertaker clearly stands out as HHH’s greatest ‘Mania rival - both men have delivered some of the most outstanding matches in their storied careers at ‘Mania 17, ‘Mania 27, and ‘Mania 28. HHH also needs to be applauded for his ‘Mania bouts with Owen Hart (‘Mania 14), Chris Benoit & HBK (‘Mania 20), Cena (‘Mania 22), and Daniel Bryan (‘Mania 30). While HHH is most known for his extravagant ‘Mania entrances, he should receive more accolades for his historic bouts at WWE’s spring spectacular.

Hollywood’s hardest working “Brahma Bull” should be proud of his in-ring ‘Mania achievements. When it came time to lock horns with his biggest rival in Steve Austin, Rocky delivered three fire bouts with him at ‘Mania’s 15, 17, and 19. And who can forget his legendary Icon vs. Icon bout against Hulk Hogan at ‘Mania 18? Before both men even locked horns, the crowd lost their collective minds and had fans at home feeling a severe case of goosebumps. His two-match series with Cena was a letdown in this writer’s eyes, but the spectacle surrounding those meetings must be acknowledged still. Even his ‘Mania 14 encounter with Ken Shamrock has some merit to it. The Rock simply knows how to show and prove on the ‘Mania stage.

Once that glass shatters in any arena, everyone in attendance knows that someone’s about to catch a lethal mudhole stomping. Like we mentioned in our previous entry, Austin and The Rock have engaged in three of the best bouts in their storied careers at ‘Mania. The Submission Match with Bret Hart at ‘Mania 13 truly pushed him up a tier in the fans’ eyes and solidified his Hall of Fame status from that point forward. Austin also got embroiled in some decent bouts with Savio Vega (‘Mania 12) and HBK (‘Mania 14). Austin may not have been in the best of moods when he locked up with Scott Hall at ‘Mania 18, but you can’t deny how hilarious his Stunners were during that unexpected matchup. Everyone’s favorite beer-guzzling redneck kicks all types of ass whenever he struts down that long ‘Mania ramp.

The “Nature Boy” simply doesn’t miss whenever he comes to perform at ‘Mania. His singles matches have done a great job of standing out from the rest of the match card by going above and beyond everyone’s expectations. Ric Flair has produced classics with Randy Savage (‘Mania 8), The Undertaker (‘Mania 18), and HBK during his tear-inducing Career Threatening Match (‘Mania 24). Flair’s level of insanity was on full display during his inclusion in the MITB Ladder Match at ‘Mania 22 (that superplex he took from the top of a ladder made us scream in pain just like he did). And he totally looked like he was having the time of his life back at ‘Mania 20 during that slept-on Evolution vs. Rock ‘n’ Sock Connection match.

Kurt Angle might just have a near-perfect record of in-ring excellence whenever his name and ‘Mania come to mind. The Olympic gold medalist and technical wrestling marvel simply knocked it out of the park with Chris Benoit (‘Mania 17), Brock Lesnar (‘Mania 19), Eddie Guerrerro (‘Mania 20), and HBK (‘Mania 21). As far as quality ‘Mania matches that don’t get enough love go, his bouts against Chris Jericho & Benoit (‘Mania 16) and Kane (‘Mania 18) deserve to be mentioned. When he was in vicious mouthguard-wearing mode at ‘Mania 22, he blew our minds during that double German Suplex spot against Orton and Mysterio. Angle has continually amazed us every time he stepped into the ‘Mania ring.

Amazing ladder and TLC matches? Check. A gruesome Hardcore Match with a hardcore legend? Check. An amazing show ender against The Undertaker? Check! Edge has seemingly done it all at this point. And he’s back in full-time mode, which means he’s probably going to create even more magic at future ‘Mania installments. The “Rated R Superstar” has been showcased at ‘Mania more times than we can count and has performed at a high level most of the time. The Triangle Ladder Match at ‘Mania 16, the TLC Match from ‘Mania 17, his MITB victory at ‘Mania 21, his flame-filled war with Mick Foley at ‘Mania 22, and his World Heavyweight Championship match with ‘Taker at ‘Mania 24 stand tall as his highest achievements.

WWE’s resident “Deadman” is inexplicably tied to ‘Mania due to his previous claim to fame as being undefeated at the “Granddaddy of ‘Em All.” While he may have taken two losses at the show he’s most synonymous with, ‘Taker still has one of the best win-loss records to date. While he started out with a few ‘Mania clunkers, Taker quickly began amassing a list of great bouts once he locked up with Diesel at ‘Mania 12. After that, ‘Taker notched major wins and produced awe-inspiring ‘Mania matches with the likes of Kane, HHH, Batista, Edge, CM Punk, and so many more. And once The Streak finally ended, you could hear a pin drop in the Mercedes-Benz Superdome. The match itself was a letdown, but that history-making moment defines the shock and awe that comes with ‘Mania.

Shawn Michaels has earned the moniker of “Mr. WrestleMania” for good reason - the “Heartbreak Kid” shines brightest every time he hits the ring at WWE’s signature spring showcase. Even his time spent as a member of The Rockers produced three worthwhile bouts at ‘Mania’s 5, 6, and 7. And when he finally ditched Marty Janetty and embraced his singles destiny, HBK quickly morphed into the greatest ‘Mania performer of all time. He had a pretty good match with El Matador (Tito Santana) at ‘Mania 8 and delivered the only bout worth sitting through at ‘Mania 9. Afterward, he entered GOAT status due to his matches with Razor Ramon, Diesel, Hart, Austin, Jericho, Angle, etc. His two matches with ‘Taker are the perfect endings to the incredible ‘Mania chapter of HBK’s historic career.

The 20 Best Looking Wrestling Championship Belts of All Time

The 20 Best Shooting Guards In the NBA Right Now