Demetrious Johnson on Greatness, Gaming, and Life After MMA 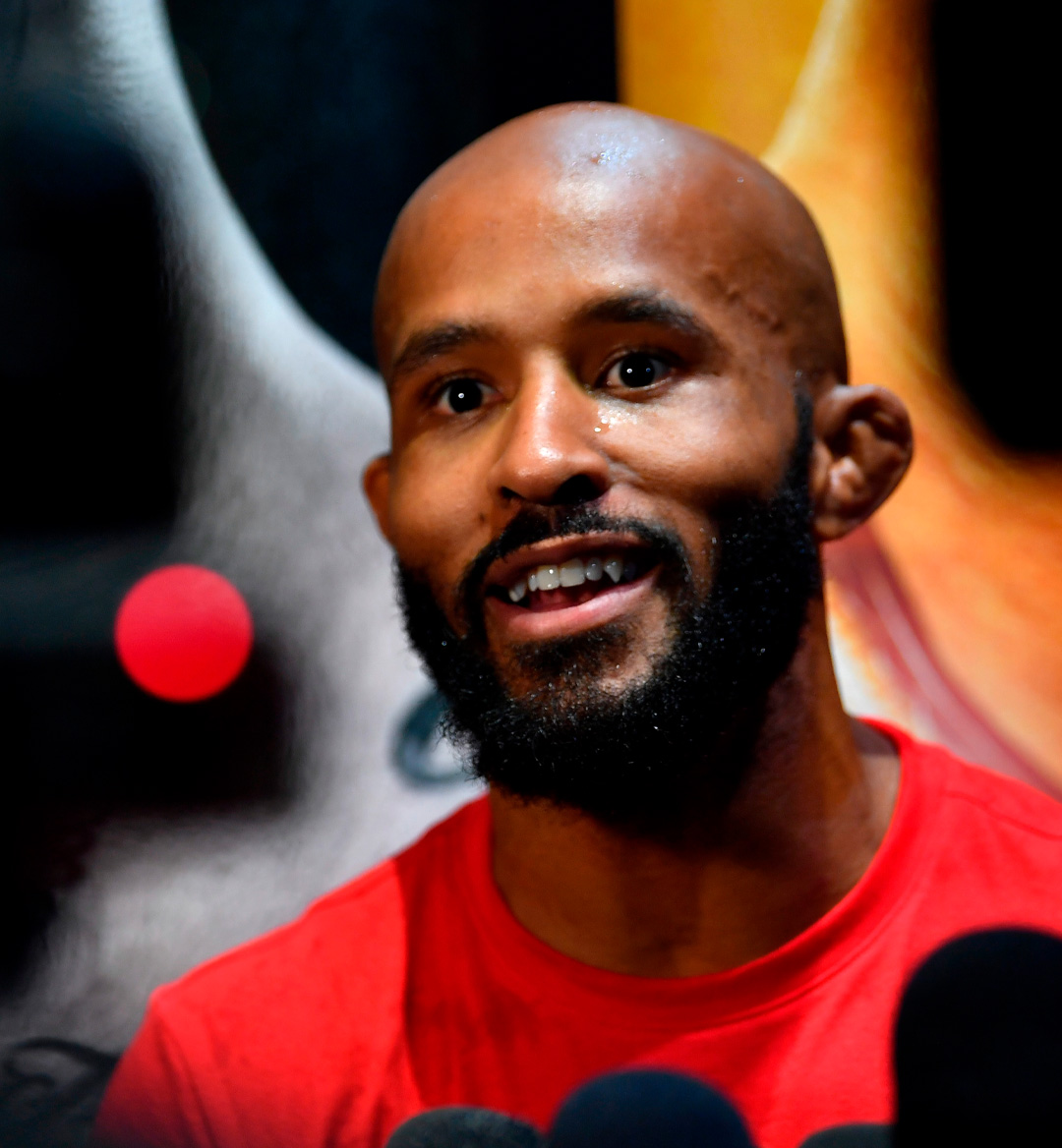 When it comes to resumes, it is tough to match up to Demetrious Johnson’s. A quick rundown:

-He defended the title 11 times.

-He is the One Championship Flyweight Grand Prix champion.

On April 7th, he will challenge for the Flyweight belt at One Championship.

Some consider him to be the greatest fighter who has ever lived.

Oh, and he is a sick gamer to boot.

A three-headed MONSTER headlines our return to U.S. prime time on 7 April! Which of these bouts do YOU think steals the show? 🏆 @adrianomkmoraes @MightyMouse @Ealvarezfight #WeAreONE #ONEChampionship pic.twitter.com/5RrJoViBx3

Demetrious “Mighty Mouse” Johnson joined Bo Templin on “In the Fight” to talk about his career, gaming, and the safety measures he takes when training for a title fight.

ONE37pm: Demetrious, if I listed every accolade of yours, we would never even get to the interview. So before we begin today, what is the accolade that you are most proud of?

Demetrious Johnson: “I would say the duration of how long I have been in this sport… that’s a big thing. So many athletes never reach the championship and I’ve held that title for six years. I’m happy to be blessed and still able to compete.”

ONE37pm: Gary Vaynerchuk has made a big push to be a part of the MMA sphere. We now represent a few clients in the MMA world, so we will tackle that. But we also do a lot of gaming here at One37pm and you are a die-hard gamer. Can you compare the MMA community and the gaming community?

Johnson: “I’d say the similarities between the two is that they are both die-hards. They both love what they love… and they can smell a rat or somebody being fake from a mile away.”

One day before the interview with Johnson, an article circled the internet about how a fighter named Spencer Fisher. Fischer has struggled with his post-fighting career, specifically the damage that CTE has done to his everyday life. Since then, there has been an ongoing conversation about the health and safety concerns in fighting and how fighters can avoid the long term effects of CTE. Fans heard Max Holloway talk about his reduced sparring leading up to his fight with Calvin Katter. Fans also voiced concerns about Kattar’s health following that bout, as he ate more shots than any other fight in the history of the sport. Dana White was heard voicing similar concerns as well.

Johnson: “It doesn’t mean anything to me. I just read an article, have you ever heard of the athlete Spencer Fisher?”

ONE37pm: I was going to ask you about this exact article.

Johnson: “At the end of the day, Spencer Fisher was a great athlete. I watched him fight growing up. I actually trained with him… and you look at that. And he went out there and he competed and he did well. And he was in some wars. For me, I don’t want wars. I want to go out there and do my best to stay above the competition and not take damage when I’m competing. At the end of the day, I'm going to retire. I am not going to be fighting for the rest of my life and when I’m done I don’t want CTE, I don’t want concussions… I want to be able to read a book, obtain that knowledge and apply (it)... When people say I’m boring, it’s not my fault. I’m not going to bang and give you blood, what you want… If you want to see some craziness, take your ass to the bar, have five beers, tell the guy next to you that he’s a bitch and you can have at it.”

ONE37pm: I joined the local boxing gym a few weeks ago and just started sparring. Knowing that you are so conscious and aware of the damage you take, how safe am I doing that?

Johnson: “You are safe. Obviously go with people that are the same level as you and respect where you are at. I’ve been training for 14 years. I’ve never been knocked out, never had a concussion from training. I don’t even wear headgear in the gym and that because we know what we are doing… It’s not about having these wars… Let’s make sure I’m ready that my tools are sharp. So especially because you are not a professional athlete, you are totally safe.”

He’s been at the top of the game for a long time.@botemplin asked @MightyMouse about preparing for championship fights...

Hear him explain why he doesn’t like headgear for sparring👀🐭 pic.twitter.com/EtVHwbABIA

ONE37pm: With the no headgear thing, I am curious, is that because you don't like the reduced vision or that you are wearing a larger target on your head?

Johnson: I don’t like that it gives you a false sense of security. It’s ok to eat a shot and for me… I’ve worn it a couple times. And I am way more comfortable getting hit… when I have no headgear on… let’s spar like we are in a fight… for boxing it makes more sense, but for MMA not as much.”

When it comes to the X’s and O’s of fighting, you would be hard-pressed to find anyone who understands the sport better than Mighty Mouse. As Bruce Lee says, he is like water. If you put a striker in front of him, he will out grapple him. If you put a grappler in front of him, he will strike him down. And if he really feels good, just to prove a point, he will beat you at your own game.

ONE37pm: If there was one thing you wish the general MMA audience could understand better, what would it be?

ONE37pm: I know your next opponent, Adriano Moraes, is a tall, long grappler. What is the advantage he has as opposed to someone who is shorter and stockier?

Johnson: The biggest thing is that long grapplers have long ass legs. So when they wrap your body in a body triangle, it takes forever for a guy my size to unravel those legs.... Those are the things that… they are just longer limbs to wrap you up.

On this day in 2017, Demetrious Johnson (@MightyMouse) submitted Wilson Reis with a 3rd-round armbar

DJ out-landed Reis 108-16 in significant strikes. That +92 differential was the 2nd-highest Johnson ever posted in a single fight pic.twitter.com/yKVLG3AFon

ONE37pm: I know you are an obsessor of the “chess match” that goes on in the octagon… If you were devising a game plan for a “chess match” with Demetrious Johnson of three or four years ago, how would you devise that gameplan?

Johnson: It’s hard. Everybody asks me, “what’s your game plan?” Well it’s to go in there and ‘fuck shit up.’ My coach says one of my greatest skills is that I analyze the fight as it goes. If I go in there and I compete then I would never be able to exploit anything. So for me to devise a game plan for myself three years ago, it would be the same thing. Go in there, fight, make sure my skills are sharp, and just be smart in the fight.”

ONE37pm: So you think you are better under the pressure of that chaos than your opponent?

When you consider that Johnson may be the greatest mixed-martial artist who has ever lived, it crazy to think that there is an entire demographic who doesn’t even know him for that. Over the last decade, Johnson has built an incredible audience from his video game empire. Outside of MMA, Johnson is constantly streaming a variety of games. And although I don’t consider myself to be an “expert” in the field of gaming, like our guy “The Don,” it would have been a mistake to not ask Johnson about the video game industry.

ONE37pm: I know you complained about the failed game console launches when they happened. And I know that you don’t obsess as an MMA fan to watch fights. But one of the pet peeves among MMA fans is when you purchase a pay per view and the stream doesn’t work. So, which one is worse?

Johnson: “I think it’s the faulty stream. The reason I say that is because the game console launch, at least with the Playstation 5 launch… Sony wants control over that. The mystique of the Playstation 5. I have buddies who still can’t get one… when it comes to faulty streams, it can be a lot of things. Technical issues, camera issues. But when people pay the $65, they expect to have it run correctly. The Playstation 5 runs phenomenal… last time I paid for a stream and it didn’t work I was like, ‘where is my money?”

Johnson: “They are completely different and completely similar. I’m pretty sure you’re gonna say, ‘oh that makes no sense.” But they’re similar because they challenge the mind. I play World of Warcraft… I’ve been blown away by it… the puzzle is always changing. Same thing with fighting, the puzzle is always changing. The difference is that your body isn’t getting beat up playing video games. You can game for six hours, you can’t train for six hours. Your body will give out… A lot of people like to go to the bar, or go to the movies… for me, video games are my coping.”

On this day in 2017, Demetrious Johnson (@MightyMouse) submitted Wilson Reis with a 3rd-round armbar

DJ out-landed Reis 108-16 in significant strikes. That +92 differential was the 2nd-highest Johnson ever posted in a single fight pic.twitter.com/yKVLG3AFon

ONE37pm: Some games are more skill-based. It is about hitting the right buttons at the right times. Others are more strategic based. You need to know the maps and stuff like that. Which one do you think you are better at?

Johnson: “When you said the maps and the strategic… Rainbow Six Siege. You gotta know the map, you gotta listen. For skill, like with World of Warcraft… and I’m going up against a Demon Hunter, and the demon hunter has a covenant… and they hit you for 15,000 damage… there is nothing you can do about that. A game like Street Fighter 5, yes that game takes a little bit of skill.”

ONE37pm: I know in 2020 you did not fight… but you have been working out the whole time. You are already to go… and you enjoy fitness outside of your career… Is there something in the gym that you are just religious about that you wonder why more people aren’t doing it?

Johnson: “Rest and stretching. Taking breaks. And listening to your body. I’m still wrestling with this whole concept. That sometimes less is more. With the whole pandemic, I was training 3-4 days a week. When I am training for a fight, I am training 5-6 times a week. Just burning myself out. And I’m like why? I’m burning myself out. This is the best I’ve ever felt… you basically are pushing your body through hell.”

Johnson’s perception in MMA is confusing. For years, people said that the 125 lb. division couldn’t sell to a mainstream audience. However, as the old saying goes, "you never know what you got, til it's gone." And I think people are FINALLY giving him the flowers he has deserved for so long.

*Demetrious Johnson’s bout on February 24th was pushed back to April 7th. The fight will be broadcast on TNT.