These 3 Fantasy NBA Matchups Would Be Astoundingly Epic

What would happen if these legendary NBA squads faced off? 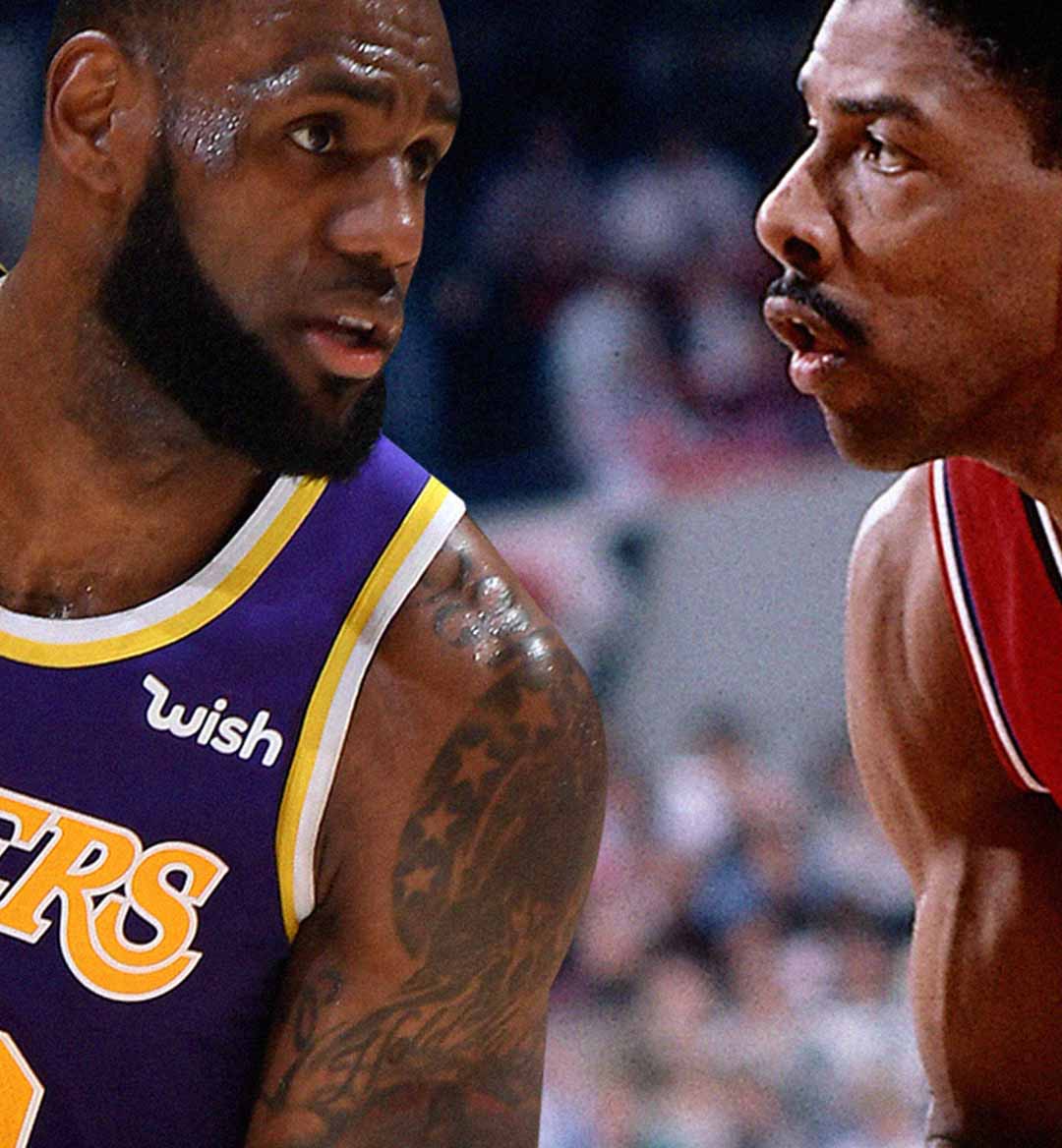 Every year on Christmas, the NBA provides a gift-wrapped slate of entertaining hoops to go along with your spiked egg nogs and coquitos.

This year, five NBA games were played as LeBron and his scrappy Lakers squad pulled off an impressive win over the defending champion Golden State Warriors. James Harden showed fans why he is the reigning MVP with a phenomenal 41-point, seven rebound performance that helped lead the Houston Rockets to a win over his former team, the Oklahoma City Thunder. The Greek Freak, Giannis Antetokounmpo, proved his case as the leading candidate for this year's NBA MVP by lighting up the Garden for 31 points and 14 rebounds in the Milwaukee Bucks' beatdown of the New York Knicks.

These eye-popping performances had everyone glued to their La-Z-Boy. But what if there was a time where you could pick and choose some of NBA's all-time great teams from different generations to face off one another? Imagine turning on the TV to hear the classic NBA on NBC theme song as Bob Costas gives his breakdown of the huge matchup between the 2017 Golden State Warriors and the 2001 LA Lakers. Or the battle of the "what if" squads like the 1995 Orlando Magic vs. the 2000 Sacramento Kings. Then there's the great debate of who is the greatest team ever finally coming to a halt when the 1996 Bulls squad faces off against the 2016 Warriors.

True hoop fans wanna know what would happen and the basketball gods have gifted you with this epic journey of generational hoops showdown at its best. Let's hop on the layup line as we warm up for live action.

The Knicks post-Jordan dominance came in full swing when the defensive-minded team developed into one of the league's most intense, in-your-face groups of the mid-'90s. Led by Pat Riley, the Knicks were the best defensive team in the league, allowing just 91.5 points per game. The starting lineup of Greg Anthony, John Starks, Anthony Mason, Charles Oakley and Patrick Ewing were embraced as a culture-changing group who revitalized the persona of what it is to be a New Yorker: Aggressive, steadfast, pragmatic and passionate. After finally taking down the newly led Scottie Pippen and his Chicago Bulls in a seven-game series, they followed it up and took down their arch-rival the Indiana Pacers led by the big apple's most beloved villain: Reggie Miller. Despite having a 3-2 lead in the NBA Finals, the Knicks came just a game short of winning the franchise's first title since 1973 when the Rockets led by league MVP Hakeem Olajuwon won their first-ever NBA title.

In the late '80s, the Portland Trailblazers had an arsenal of scorers that lit up the Memorial Coliseum. Led by NBA All-Star Clyde Drexler, the Blazers finished their season 59-23. Although they lost to the "bad boys"— the Detroit Pistons—this Blazers team started a run that made them a perennial powerhouse in the Western Conference.

If these two were to meet up, this would be a matchup where the hard-nosed defenses of both teams would be on display. The frontcourt of Ewing, Oakley and Mason would be too much to handle for the upstarting Blazers squad. Drexler would light it up for 30 points, but he would be the only main contributor for the Blazer offense as a young, streaky shooting Cliff Robinson would be struggling against the physicality that Mase and Oakley bring. Don't be surprised when John Starks finishes with a solid 26 points, five steal performance while Ewing goes for a double-double by dropping 24 points and 12 rebounds.

Key Moment: Ewing blocks Drexler's shot then finishes with an and-1 over Kevin Duckworth to start a 12-0 run midway in the 4th quarter.

This entertaining thriller features two superstars who were at the prime of their careers as they propelled themselves to becoming the most unstoppable scoring forces to be reckoned with on the court in NBA history. On one side, you have the Philadelphia Sixers squad that became one of the league's most entertaining teams to watch all because of one man. He wore the #3 and his name was "The Answer." Allen Iverson was an undersized scoring machine for the team coming out of the city of brotherly love. He was averaging a league-best 31.1 points per game while winning his first and only NBA MVP.

But what's a championship caliber team without solid role players? Sixers had that by Dikembe Mutombo swapping everything in sight, Raja Bell being a pest on the other team's best scorer and Aaron McKie stepping up to help Iverson with the scoring load which led to him becoming 6th Man Of The Year.

On the other hand, the resurgence of a new and improved Cleveland Cavaliers squad was finally announced to the basketball world by their hometown hero from Akron, Ohio. By his fourth season in the league, LeBron James continued to prove to the entire hoops world that he was a generational player.He proved it after carrying this Cleveland squad to a 50-32 record. With a little help from key assets such as sharpshooters Daniel "Boobie" Gibson, Damon Jones and a versatile frontcourt starring Zydrunas Ilgauskas and Drew Gooden, LeBron and his Cavs overcame a disappointing playoff appearance the previous year—to land in the NBA Finals against the San Antonio Spurs. Although they were swept by the Western Conference powerhouse, LeBron's impressive showing that season made fans watch out for the mega hoops star potential he was oozing off ever since he was drafted as a high school standout in 2003.

Excitingly, this game comes down to the last possession as both teams have been lighting up the scoreboard. Allen Iverson did his signature crossover and drained an unbelievable three-pointer over Larry Hughes (a former 76er) to secure the win for Philly. LeBron James dominated as usual with an outstanding 40 points, 12 rebounds, and ten assists performance. Daniel Gibson came up in the clutch by draining four three-pointers, but it wasn't enough to help his Cavs walk away with the win.

Key Moment: A.I. breaks Larry Hughes' ankles with a killer crossover that led him to drain a game-winning three-pointer.

In an epic dream matchup, you get to see arguably two of the greatest NBA teams ever leave it all out on the hardwood. Both squads are filled with NBA All-Stars, MVPs, Hall Of Famers and future Hall Of Famers.

Fresh off of a disappointing early exit, the Bulls were back in takeover mode when "His Airness" returned to basketball for a full season in 1995. Led by the hoops genius himself, Phil Jackson, the Chicago Bulls ran through every team that stood in front of them. Including the ending of the 1994-1995 NBA regular season, the Bulls held an NBA record by having an insane 44-game winning streak. With the versatility of Scottie Pippin helping the full court attack on the offensive and defensive side, the Bulls went on to put the icing on the cake on a historical record by winning the NBA Finals in six games. MJ went to make history by becoming just the second player to win regular season MVP, All-Star MVP and Finals MVP.

On the other end of the court, you have the greatest shooting team to ever be assembled. The 2015-2016 Golden State Warriors lit up the Oracle Arena in entertaining fashion as they became one of the few teams to ever revolutionize the game of basketball. A young guard from North Carolina by the name of Steph Curry had a true breakthrough season which led to him becoming the first NBA player ever to win the regular season MVP award unanimously. Also, he became the seventh player ever to enter the 50-40-90 club (shooting 50% for field goals, 45% for three-pointers and 91% for free throws during the entire regular season).

Led by a coach who has experience winning championships as a player and coach, Steve Kerr, he was able to develop the young gunning Warriors and helped them break his old team record of having the most wins in a regular season in NBA history. Klay Thompson became a slept-on three-ball machine as the opposing team's defense would collapse on Curry while Draymond Green was Dennis Rodman 2.0—an undersized big man who grabbed rebounds, created plays and became a fan favorite.

The game comes down to the final possession. Michael Jordan has the ball as Andre Iguodala guards him. MJ made his move and broke down Iggy. The Warriors' defense collapsed, and Mike picked up his dribble to kick it out to no other than his shooting marksman—you guessed it—Steve Kerr to drain a three as time expired to quiet the Warrior fans in Oracle Arena. The crowd is stunned as the Bulls led by another legendary performance by Michael Jordan, who finished with 36 points, 11 rebounds, seven assists. His partner-in-crime, Scottie Pippin chipped in with 24 points, nine rebounds, and seven steals.

Meanwhile, the Warriors lit it up through the entire game. Shooting a ridiculous 45% from three-point land, Curry had another breakout game. Breaking Klay Thompson's record of 14, Curry drained 15 threes and finished with 49 points, five assists and three steals. Klay Thompson finished with 30 points and five rebounds. Meanwhile, Draymond Green had a quiet triple-double by finishing with 14 points, ten rebounds, and 11 assists. If you wondered with a scoring performance by Curry, how did they lose? The reason why is they went cold during the wrong time of the game.

Key Moment: Steve Kerr ices the game for his beloved Bulls squad as he helps take down a Warriors team he would eventually coach into the NBA history books.