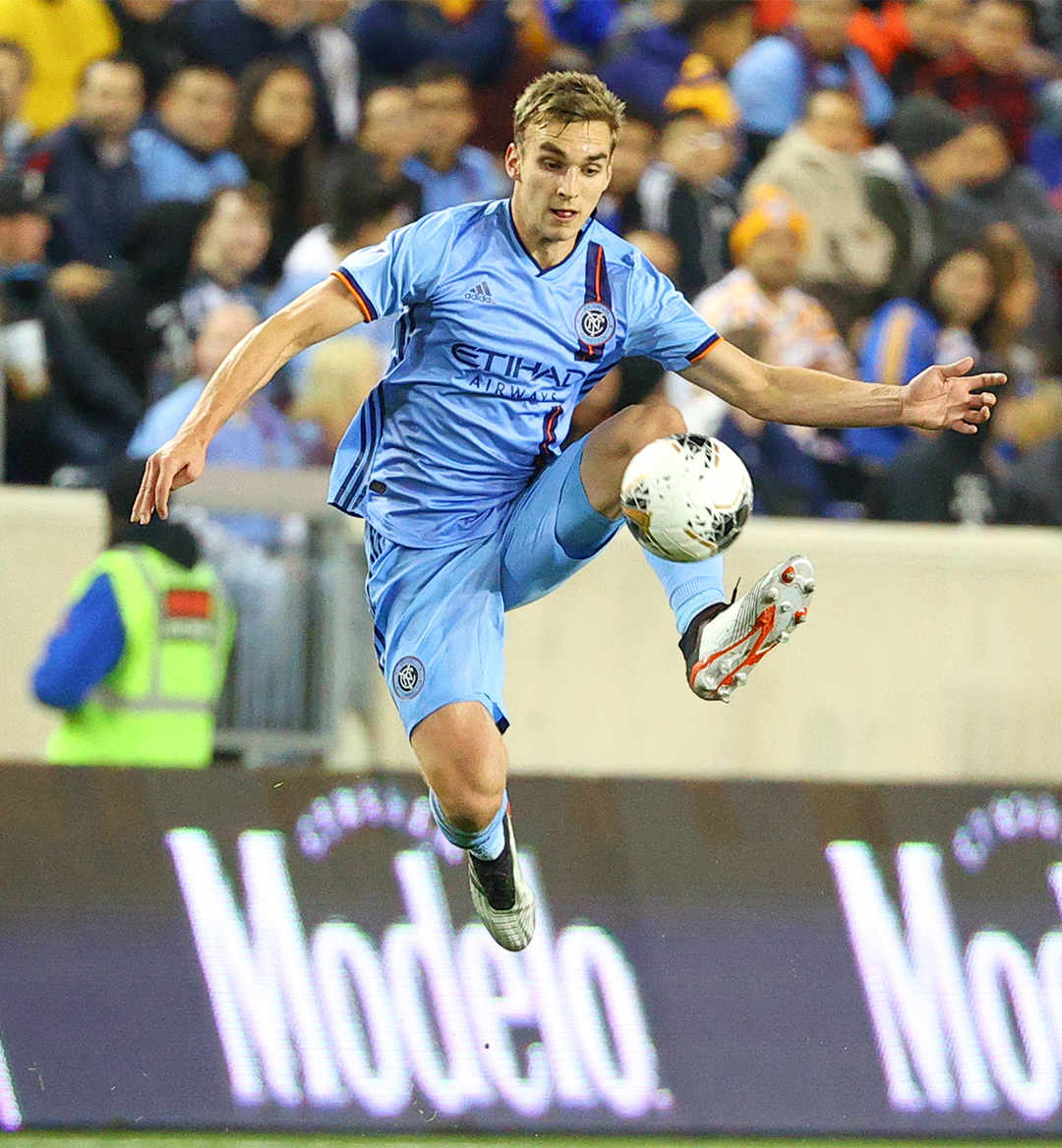 New York City FC launched itself into Major League Soccer with a bang that featured star European players, a passionate Yankee Stadium atmosphere and the support of one of the Premier League’s wealthiest clubs in Manchester City.

David Villa, Frank Lampard and Andrea Pirlo were brought to the club to draw initial attention to NYCFC, who became the second New York market team to begin their MLS journey.

After a few years of brief success and a lot of attention drawn, all three players exited and moved on to other ventures after long, successful careers internationally. That’s when NYCFC began to take a different approach for squad building, resulting in an influx of youth and focus on its academy system.

That’s where James Sands comes into the equation. The club’s first-ever Homegrown player signing, Sands has been involved with NYCFC indirectly for years prior to him inking his first professional contract.

He came up with well-known youth organization, New York Soccer Club, who have become a direct affiliate of NYCFC since the MLS side made its league debut in 2015 and began to expand its footprint in not only New York City, but the rest of the Tri-State area.

Having grown up roughly 20 miles from NYCFC’s state-of-the-art training facility in Orangeburg, New York, Sands is the truest definition of a Homegrown player and he’s taken that title in stride by displaying how other players can take advantage of these situations through persistence.

“I’ve always been pretty good at handling pressure situations,” Sands told One37pm. “I try not to think about it too much, but it’s definitely important for me to show all the young players in the area that there’s a pathway to the first team and a pathway where you can eventually play games.

“A lot of clubs sign young players, but they’ll ship them out on loan or not really provide them with an opportunity to break into that first team regularly, and I think that’s something really unique about New York City.”

Now entering his fifth season with the club and fresh off a five-year contract extension that Sands signed in March, the shift in philosophy at NYCFC has never been more evident.

Sands has been a cog in the midfield and defensively for New York City over the past two seasons, and figures heavily into the squad moving forward with the exit of Alexander Ring over the offseason.

There’s no question that Sands will be a regular in manager Ronny Delia’s system in 2021, but the question remains where. The New York native doesn’t seem to mind where he plays though, as long as he has the opportunity to excel and progress further as a player.

“I really think it depends on the style of play,” Sands said. “I think some leagues I’d be better suited for center back and others I’d be better in an advanced role as that No. 6. I’m glad in MLS I can keep working on both because it’s only going to help me in the long run.”

That “long run” Sands is referring to is the path that several of his teammates have been able to capitalize on over the past two seasons.

Giovanni Reyna and Joe Scally both completed moves to the Bundesliga during recent seasons, and Reyna, in particular, has really shone at Borussia Dortmund alongside superstar striker Erling Haaland and England internationals Jadon Sancho and Jude Bellingham. 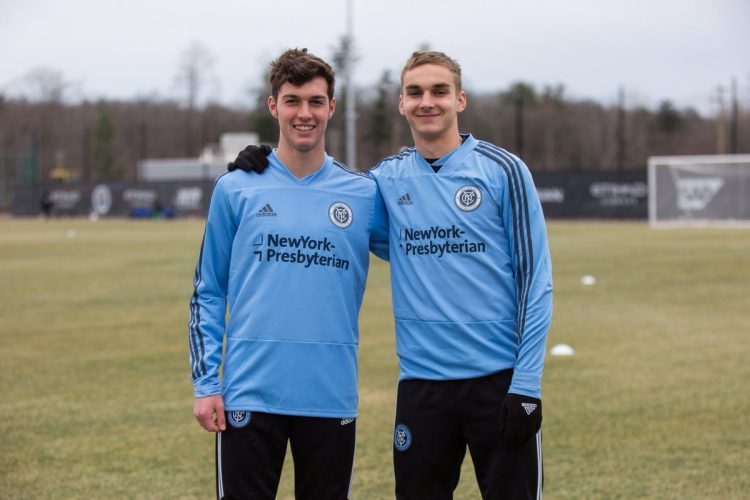 Although neither Reyna nor Scally had the experience of Sands in MLS, both were able to capitalize on NYCFC and City Football Group’s relationships worldwide and progress their careers in Germany where clubs have shown a willingness to provide valuable minutes to youth players over the years.

Christian Pulisic, Tyler Adams, Chris Richards and Weston McKennie are just a few of the other success stories that have been a direct result of the Bundesliga’s youth initiatives, and although Sands would love the opportunity to play there or somewhere else in Europe in the near future he remains focused on the job at hand in MLS.

“It’s something I’ve been very open about in the past and I’ve talked with the club and coaches about that,” Sands said. “For me I really want to help this club win a trophy, and I think this year is as good as any to do that.

“But I’ve also discussed with them what I need to do to continue to develop and show that I’m ready for that next level. It’s nice to have everyone at the club on board and on the same page about that.”

Sands and several other young NYCFC players are vying for that big opportunity overseas after watching their teammates and others across MLS complete those moves.

That’s why the 20-year-old believes his club’s shift to a younger set of talent could be beneficial for not just him but so many others in the organization like Justin Haak and Andres Jasson.

“The trend toward younger players is probably a good one,” Sands said. “David, Frank and Andrea were all really important players for this club that helped establish the culture of our team early on and definitely helped bring fans to games, which has been so incredible for a new club.

“I think with the younger players we have now there’s a lot of ambition. You know, guys who want to get to the next level, so there’s lots of incentive to play hard and show well for the team.”

Despite the shift in culture at NYCFC, Sands is forever thankful for the chances he had playing alongside Villa and Co., and believes the experience he received sharing the field with various World Cup legends has undoubtedly affected his game for the better.

“It was a tough environment to go into and not because of anything they did, just their backgrounds in the game,” Sands said. “You have these World Cup legends next to you, but I think if you just realize that you’re training with the first team for a reason then it makes it all a little easier.

“I learned really quick though that they were all such good guys though, and they were just trying to give back to the younger players on our team and be as helpful as possible. I got very comfortable asking them questions on the field, but also just their experiences as well.”

NYCFC has a very unique relationship with outfits around the globe, most notably the fact the club’s CFG ownership also controls Manchester City. 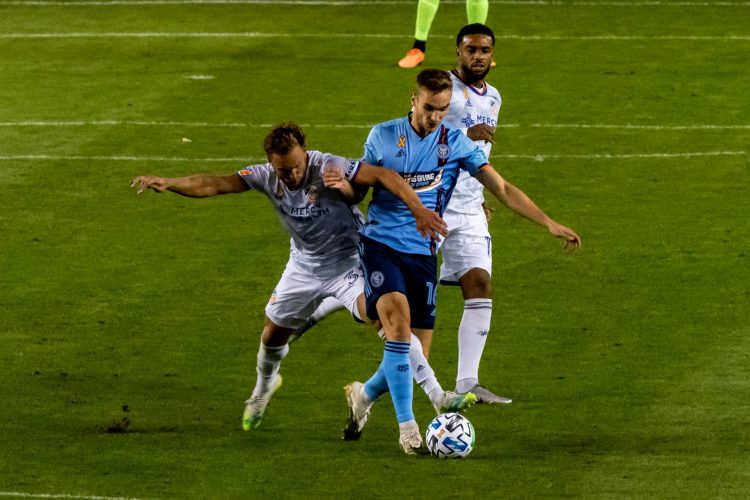 That partnership has resulted in Sands and other players at the club having the opportunity to see Man City firsthand, whether that be traveling to England or the multiple-time Premier League champions coming stateside.

Sands has always been a huge Pep Guardiola fan, dating back to the Spaniard’s days at Barcelona, Bayern Munich and now Man City. The NYCFC midfielder deeply admires Guardiola’s style of play he instills in his players and particularly how his team’s defensive midfielders play the game.

“I think any team Guardiola is on I always try to keep an eye on the number 6 they have,” Sands said. “Rodri at Man City is a player I really watch a lot now. I just think any player under Guardiola has a chance to become so much better in  his system.

“I also really like watching the young Americans do well too. I think it helps us in MLS make those moves to Europe and definitely paints a better picture of what American soccer looks like.”

Like many young kids across the U.S., Sands wasn’t solely focused on soccer growing up, playing lacrosse, basketball and flag football as well as the beautiful game.

However, once he reached middle school his focus shifted to soccer, and from there it’s been a steady rise that’s led him to this point in his career.

Sands’ passion for the sport came from his family, who along with his three siblings have all played soccer at high levels, despite their parents not having a background in soccer. Sands’ twin brother, Will, plays at Georgetown University, while their two sisters, Katherine and Elizabeth, play at Williams College and Bowdoin College, respectively.

“I played a lot of sports when I was little, but soccer was the sport my sisters played most so I kind of followed their lead,” Sands said. “The funny thing is neither of my parents played soccer growing up so it’s weird that they have four kids all playing the game into college and beyond that.”

Sands also helped improve himself off the field during this past year as the COVID-19 pandemic took a toll on many around the world.

During his off time, the 20-year-old started taking classes at Southern New Hampshire University -- a school that has a direct partnership with MLS.

Sands joked that he needed to keep up with his three siblings, who have all attended top academic colleges around the country. He hopes to eventually receive his diploma in addition to his budding career on the pitch.