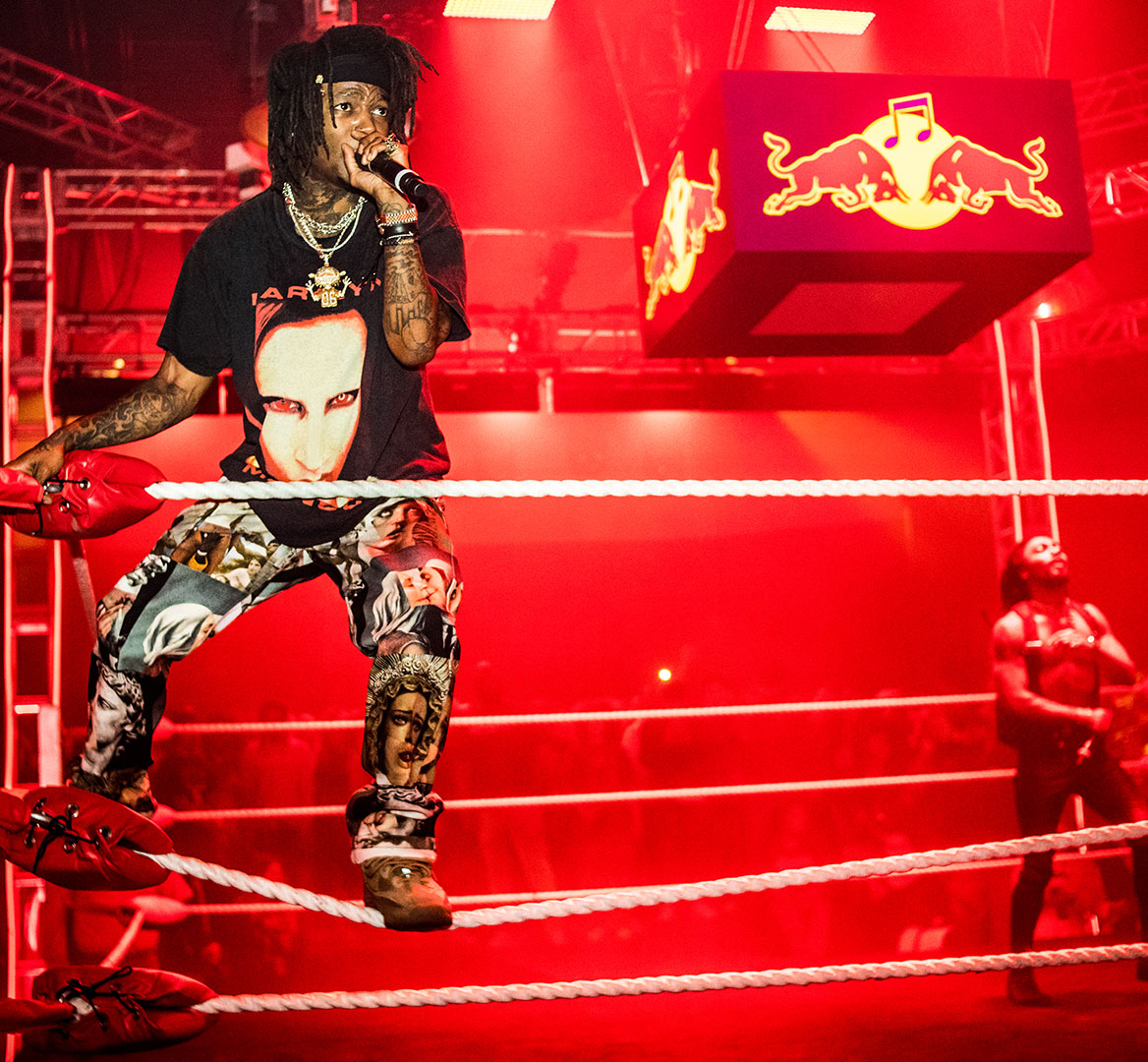 There’s a degree of sadism involved in being a hip-hop fan. We want maximalist rappers who bolster their own greatness by lessening another. Hearing rappers brag about breaking up homes, killing innocent people, and taunting people who are broke are as common to hear in hip-hop as it is to hear a guitar lick on a rock song or trumpet playing on a John Coltrane track. Nothing in hip-hop exemplifies this thirst for skillful disrespect than rap battles.

Curry collaborated with Red Bull in 2018 to put a new spin on rap battles while still appealing to the hip-hop fan’s proclivity for competition. His performative pugilism came in the form of rap battling where competitors perform songs inside a wrestling ring for the crowd’s approval. On November 16, 2018, in Curry’s hometown of Miami, Florida, Curry aka Zeltron went up against hip-hop collective Flatbush Zombies in a battle billed as “Zeltron vs Zombies.” The response was so feverish and the on-time event was turned into a Zeltron World Wide series of shows that have to pit him against Joey Badass in Atlanta last November, and J.I.D. in February back at the same Magic City Innovation District where the event originated. 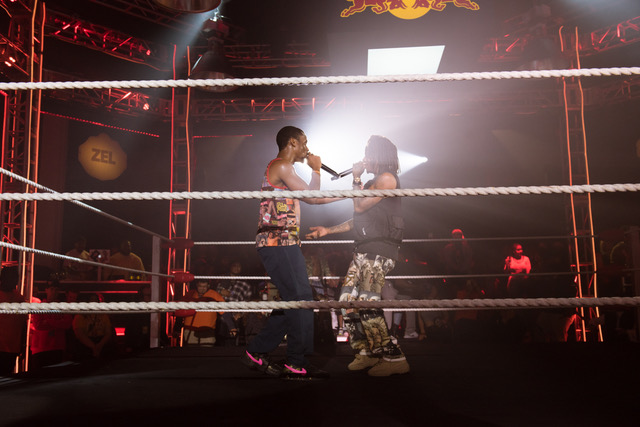 Before JID or Denzel turned the ring into a stage, Red Bull warmed the crowd up with an actual card of wrestling bouts. Everyone in the crowd came to be entertained by a rap show, yet everyone was vocally invested in body slams and athletic pageantry of the tag team matchup. Typically, opening acts at hip-hop shows are hit or miss, but watching people pummel each other was a perfect precursor for the physicality of JID and Denzel’s performance, both of which found each MC without a shirt, drenched in sweat and on the top turnbuckle by the end.  Whether through imitation of the wrestlers, inspiration from the ring, or a combination of the two, JID and Denzel exemplified how closely hip hop performances mirror wrestling matches.

The battle lasted five rounds with each artist performing songs back and forth. One artist would perform a certain number of songs stipulated by each round and his competitor would enter the ring directly after and try their hand at electrifying the crowd. Each artist adjusted their typical performance style enough to fit the competition format. During a normal performance, artists value their energy only second to the crowd’s reaction so they structure their shows to appease both. A sequence of upbeat songs meant to galvanize the crowd usually are followed by slower songs meant to balance the show’s energy and give the artist a much-needed respite. That’s not the case in a battle where any lull in energy could be the difference between winning and losing the crowd.

Denzel’s first song was “Sumo” is one of his most popular songs and would normally be later in his set that he untucked early to take an early lead in energy and asked the crowd if they wanted to moshpit. Denzel even did a standing spin kick while performing his five-year-old audio riot called, “Ultimate” and bounced around, under and through the ropes like the late Macho Man. Not to be outdone, JID came firing out the gate with “Never,” using his fast flow and commanding voice to stun the crowd into applause before eventually going full Ultimate Warrior and shaking the ropes at the same speed of his supersonic delivery.

As captivating as didn’t feel like a battle for the majority of the event, until late in the competition. Near the end of the show, Denzel brandished one of the foam fingers given out to the crowd that read “Team JID” before ripping it. After that, JID compared Denzel’s final song of the battle to “some Red Hot Chili Pepper shit,” before letting it be clear to the crowd “I’m finna rap.” As competitive as the two got, the entire battle was predicated in respect and admiration, uncommon in wrestling bouts and almost unheard of in rap battles.

The lack of acrimony usually requisite for a rap battle being missing was noticeable without being a deterrent. JID came into the ring when Denzel did ‘Ultimate’ to turn up with him. Curry came out to be the hype man for JID’s climactic performance of what sounded like an unreleased song. In the end, both hands were raised and both waists were outfitted for the championship belts, as the bout was considered a draw by the equally deafening response from the crowd each rapper elicited.

“The majority of those guys are my homies. JID is the homie. Flatbush (Zombies) and Joey (Badass) is the homie. If I was able to share a tour with you, come to your crib, vibe with you on all types of levels and you can do the same; come to cookouts, vibe with me and come to my dad's house, you’re the homie,” Curry said. “Fuck all of that, ‘Oh, I make more money on tour and all that stuff like that.’ We all getting paid, so I'm gonna make sure we all do.” 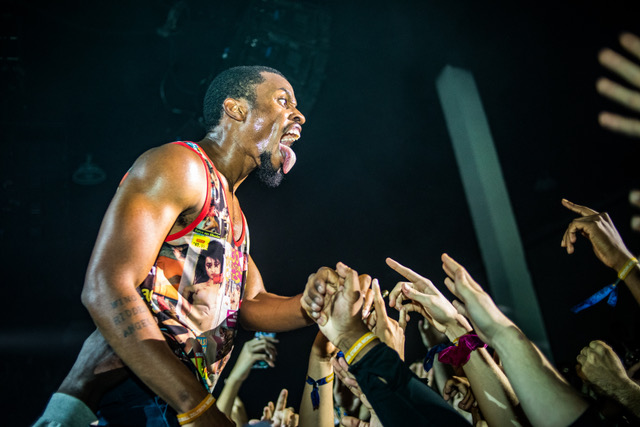 Red Bull’s Zeltron World Wide is exhilarating, but it wasn’t a rap battle in any traditional sense. However, hip-hop beefs today aren’t hip-hop beefs in any traditional sense. When the sting of Nas’s “Ether” was too much to bear in winter 2001, Jay-Z didn’t post a vitriolic response to Nas on his website. He went into the studio, popped on Nas’s “Got A Gun” instrumental, and proceeded to spew invectives about how he “left condoms on your baby seat” and how both he and Allen Iverson had sex with the mother to Nas’s daughter Destiny. We’ve seen that same sort of feud played out entirely on social media.

Jailed rapper 6ix9ine probably had the more public feuds than any rapper over the last few years. He questioned Chief Keef’s street cred, figuratively spat on the grave of Trippie Redd’s deceased friends, and invited some of the most nefarious rappers to his dick. But, few, if any, of the combative artist’s waged wars made it onto a song, with Instagram being the usual arena for his disrespect duels.

Luckily for hip-hop traditionalists, there are still emcees like JID ready to wage war with words at any moment. “When I think of battle, I think of URL [Battle League]. So, when he first said it I was like, ‘Oh like that's what we on?’ But, that wasn't it. We’re just performing our songs bringing energy,” JID told ONE37pm. “I wrote a little URL verse but I ain't gonna do it because it’s love.” 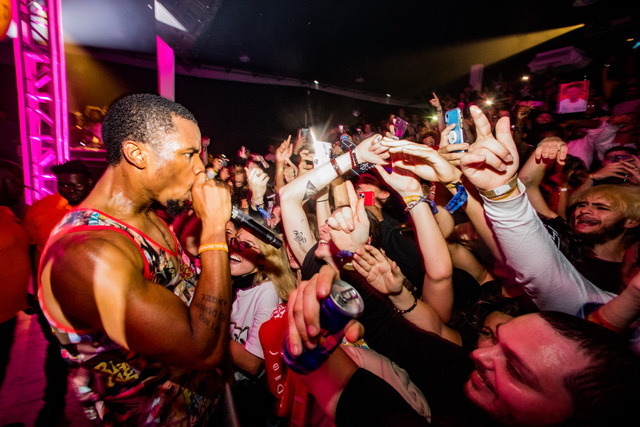 Perhaps Zeltron WorldWide is the next evolution of hip-hop battles. Artists these days measure each other based on streams and plaques more than they do skills. So, performing their most popular songs in an effort to get more support from the crowd than their competitor is essentially the basis of rap’s hierarchy. Eliminating the face-to-face lyrical jousting fundamentally changes what a hip-hop battle is, but also helps to ensure the competition stays friendly and violence isn’t sprouted from disrespect.

“Yeah, this could be a thing. That's hard. We’re homies. But, if it was two artists that don't like each other and they just want to battle, that's tight,” JID said excitedly.

The event’s founder agrees that his vision of hip-hop battles could be a mainstay in the culture. But, this would be more Wrestlemania-level than Monday Night Raw.

“Nick Cannon got that in the bag as a TV show [with MTV’s Wild N Out]. This would be a  pay-per-view event. This would be some shit where we have Drake going against Kendrick Lamar and a lot of money is on the line and that's when we'll actually start deciding who's gonna win, who's gonna lose, and who's gonna get the blues,” Curry said.