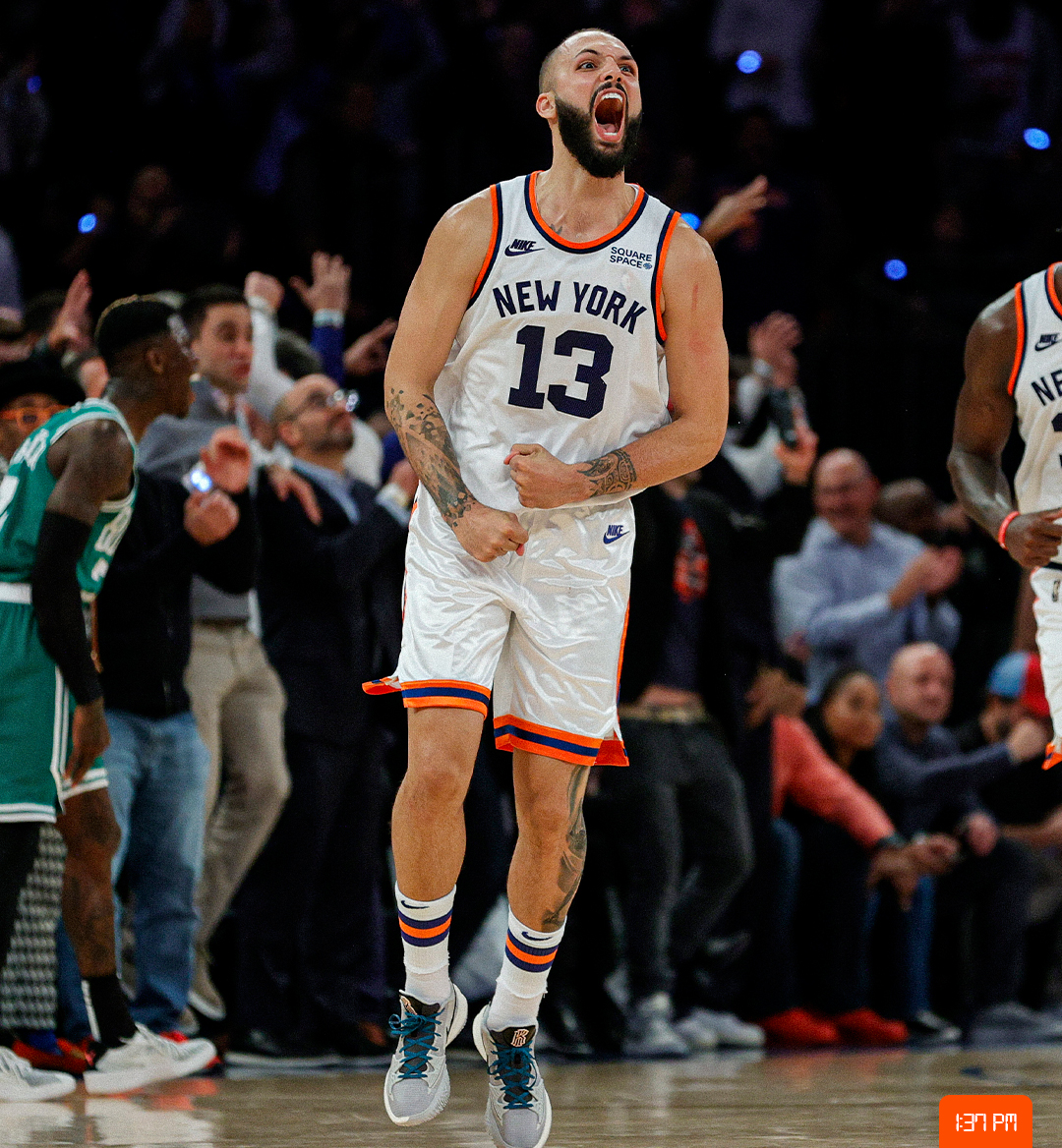 After years of the Knicks' schedule just representing a list of future losses, the New York Knicks are back and the haters are sick about it. During their season-opening 138-134 double-overtime win against the Boston Celtics, the Knicks asserted not only that they’re no longer the accursed rat-king of gloom of recent vintage, but that they’re a legitimately good team.

In fact, it’s this legitimate goodness that defines them; the Knicks play within a remarkably constrained sliver of imagination that leaves no room for utopian, Golden State-style ball movement or a Lebron James-induced gravitational pull. Instead, the Knicks sturdily toggle through their four-ish plays on offense and try on defense. If there’s some kind of extra pressure or scrutiny or profundity that’s imparted by playing in New York, it’s seemingly been put on [extremely Tom Thibodeau voice] ice. All that extra stuff—the rapturous fanbase that’s permanently caught somewhere between crying, hugging and fighting; the bold-type tabloid headlines; the dead-eyed owner who sulks on the baseline like a water-logged Kendall Roy—is irrelevant once there’s serious basketball to be played.

On the court, the Knicks are the archetypal Tom Thibodeau team—which makes sense because they’re coached by Tom Thibodeau. Even if Mitchell Robinson is a stalwart shot-blocker (the Celtics effective field goal percentage was 13.4 percentage points lower when Robinson was in the game than when he was on the bench) and RJ Barrett held Jayson Tatum to 7-30 in the first game, the Knicks’ greatest strength is their schematic cohesion. While most modern NBA defenses avoid bringing help from the strong side of the court and labor to limit rotation as much as possible, the Knicks flout conventional wisdom.

This is controlled burn defense—NBA offenses are so good that there’s always going to be a fire, so the key is to know and control where it’s going. To be fair, defense is often a futile endeavor (Jaylen Brown torched the Knicks for 46 points), but the Knicks scrabble to reclaim whatever bits of agency they can.  Accordingly, the Knicks intentionally bring help early—particularly from the wings—to discourage drives and force kick-out passes, trusting that they can rotate quick enough to cover perimeter shooters. By doing so, they practically script possessions for the other team, goading opponents into passes to shooters that the Knicks know they can defend. In this sense, the Knicks play almost defender-agnostic defense—per Cleaning the Glass, they held the Celtics to a mere 82.5 points per 100 possessions in the half-court despite relying heavily on bad defenders such as Kemba Walker, Obi Toppin and Evan Fournier. The athletic gifts or talents of any one player don’t matter as much as their ability to be in the right place.

Offensively, the Knicks are competent and utterly uninspiring. They’re functional in a prosaic, workaday way—odes are written about fancy Grecian urns or intimations of immortality from recollections of early childhood, not undelayed bus routes or mid-range jump shots. Still, Julius Randle has miraculously mutated into one of the world’s 20 best basketball players, scoring 35 points in the opener while adding nine assists and eight rebounds. Never mind that he moves awkwardly—he dribbles with chopped steps like he’s running down a steep hill—or that he lacks the elasticity or burst of other star players, he’s evolved into the unlikeliest primary ball-handler in the NBA all the same; no player has assisted on more corner threes than Randle since the start of last season. The reason for his rise is simple yet confounding: he’s stopped missing shots. During his breakout All-NBA Second Team campaign last year, he shot over 40 percent from three, after only topping 30 percent once in his previous five seasons.

After last year’s offense was short-circuited by a Hawks team that made the radical and genius choice to, uh, guard Randle, the Knicks spent the summer revamping their backcourt by signing Evan Fournier and Kemba Walker. Although the same menu of pistol actions, double drags and Spain pick-and-rolls remains, the early returns point to a considerably more potent offense; Kemba Walker can presumably make good stuff happen out of a double drag, but Elfrid Payton was a drag. Notably, the Knicks can now play lineups in which every player is a threat to pass, dribble and shoot—against the Celtics, Fournier  (32 points) and Barrett (19 points) racked up the bulk of their points by attacking tilted defenses that were scrambling to rotate in time.

All of this is to say that the New York Knicks are a real NBA basketball team. Whereas last year’s team felt like a bunch of veteran hardos hardo-ing their way into a rickety, joyous accident, these Knicks are serious. This isn’t to say they’re going to win a championship—the Bucks, Nets, and Lakers occupy some Secret Beef Room of eliteness that’s inaccessible to any team without multiple Hall-of-Famers in their prime. But there’s still virtue in being good and trying to be good. For the first time in nearly a decade, the Knicks offer a reason to care about them that isn’t masochism or being one of their moms. At the very least, if their first game is any indication, the Knicks will be fun and competitive. Histories and legacies are built on years, but happiness is built on days.