Allen tells the story of the car ride that changed everything 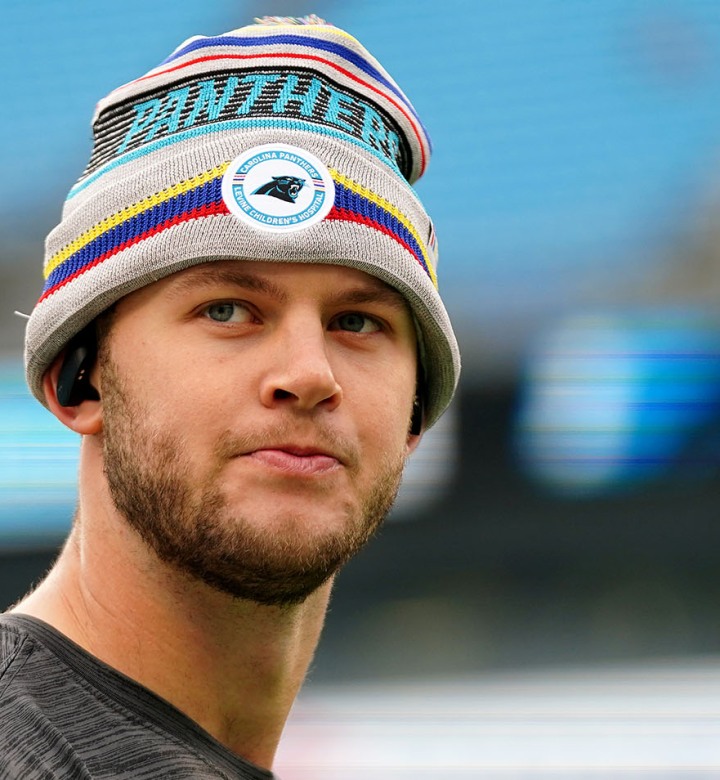 Although Carolina Panthers starting quarterback Kyle Allen never thought it would take an unplanned, 31-hour drive to get his mind right, a few things clicked into place on the road between Charlotte, North Carolina, and his parents’ house Scottsdale, Arizona, in the fall of 2018.

As an undrafted free agent, Allen had signed with the Carolina Panthers’ practice squad, hoping that would eventually lead to something more. After being officially added to the team during Week 1 of the 2018 NFL season, Allen leased an apartment in Charlotte on Thursday and bought a used Ford Escape the next day, hoping he’d be working in Charlotte for a little while.

“I got fired the next Monday,” Allen said a few weeks ago from the Carolina Panthers’ facility in Charlotte. “I like to say ‘fired’ because it’s true.”

Allen gave up the apartment and loaded all of his belongings into the Escape. He was discouraged, but he also surprised himself with how he felt about the situation. He felt hopeful and confident that the work would pay off. But also, he felt self-aware, and believed himself capable of finding a solution.

“I was super patient and chill with it at that time,” Allen said. “The same day that I got cut, I flew to D.C. and I had a workout. I flew back the next day—that was Tuesday night. Then on Wednesday, we just packed up all our stuff and started driving home.”

“I didn't have enough money to ship my car,” Allen said.” I didn't want to waste money on buying a flight or anything, so just said, ‘Screw it, let's drive.’ So we drove as far as we could that day.” They got as far as Dallas, where they rented a hotel room that cost $60 a night.

Throughout the drive, Kyle and his girlfriend, Summer, reflected on his NFL situation, listening to podcasts and music to kill time. Allen had performed well in a preseason game for the Panthers, so a recent example of success was fresh in NFL evaluators’ minds.

“I knew I had some good tape out there and I didn't have tape out there for a long time,” Allen said. “So it was just a time where I needed to be patient and just let some things fall into place.”

At home, Allen worked out and watched football, or as much football as he could stand before feeling frustrated by his own competitiveness. He flew around the country most Mondays for workouts. One week, he found himself in Buffalo, when the Panthers rang his agent, Brian McLaughlin.

“The Panthers called him and were like, ‘Hey, we're thinking about bringing Kyle back.’ And he was like, ‘Well, he's in Buffalo for a workout, so you'd better sign him now.’ So they ended up signing me that day.”

Allen wouldn’t make the same mistake twice. He flew directly to Charlotte with only a day-bag and no plans on signing a lease.

“That was the only trip that I didn't bring a lot of clothes on, because it was my fifth workout and no one had signed me,” he said. “And so I was like, ‘Screw it. I'm not going to get signed, I'm not going to bring a bunch of clothes.’”

“So I ended up going to Carolina with like, two pairs of underwear.”

Weeks later, Allen was the starter.

To say that Kyle Allen took the road less traveled would be the understatement of the century. But that path has also provided Allen with the motivation and confidence of the underdog, and the willingness to bet on himself time and time again.

“My situation is super unique,” Allen said. “I don't really know anyone who's been benched and then decided to go to the NFL.”

Going into college, the naturally gifted Allen was the number one quarterback prospect in the Class of 2014, a pedigree he had earned after a huge high school career in Scottsdale. He committed to Texas A&M, where Kevin Sumlin’s pass-happy pro-style offense had lifted Johnny Manziel to a Heisman Trophy in 2012. He started the season strong, but ended up splitting the position with Kyler Murray, the eventual first pick in the 2019 NFL Draft. Allen, confident he could succeed in a new setting, transferred to Houston.

After sitting out a year in Houston to comply with NCAA transfer rules, injuries marred a promising early season campaign, and eventually Allen found himself on the bench again. At this point, Allen could either wait it out and hope that the unstable ecosystem of college football would somehow bend his way. While the NCAA’s transfer portal has led to increased player freedom in college football, it’s a toss-up—players like Allen, who might seek out a second transfer during their college eligibility, can easily be lost in the shuffle.

So Allen declared for the draft, knowing that if the right people could see him throw, he’d have a chance at the sport’s highest level. Going against advice from NFL scouts and pundits, Allen decided to enter the 2018 NFL Draft.

“I didn't play for nine weeks and then I'm deciding to go to the NFL and everyone's calling me crazy,” Allen said. “I really did believe in myself the whole way through. But it's tough when no one else believes in you and you feel like you're insane. You're like, ‘I know I can do it. Why doesn't anyone else think I can do it?’"

Allen had a mentor, former NFL quarterback Jordan Palmer, who believed in him and spoke to that effect to anyone who inquired about Allen. Also, Allen had a reputation. After all, he’d been a national star and participant at Elite 11, a well-regarded finishing school for high school quarterbacks. (Allen’s class also included Houston Texans QB and MVP candidate Deshaun Watson). If he could get some tape down, he knew he’d get a crack.

“I was the number one guy coming out for high school. I knew when I played at A&M, I played well in a lot of games. I didn't play well in some,” Allen said. “For me, it was all just about trying to find some consistency in my play and in the chances I was going to get in an offense. I just felt like there was no real consistency in my college career.”

“And when I went to Houston, I had one bad game and I never saw the field again. I just felt like there was not a lot of people who really wanted to ride with me in college and see it through. So for me it was all about, I know I can play, now how can I do it on a consistent basis?”

During Week 3 of the 2019 NFL season, Allen stepped into the Panthers’ starting job after longtime starter Cam Newton was ruled out, indefinitely, with a foot injury. Allen, who approaches things practically, knew what had to happen.

“The only thing I could think about was just, take advantage of this opportunity.” With Newton now on injured reserve, the starting job is essentially Allen’s for the rest of the season.

In a Week 12 shootout in New Orleans, Allen went toe-to-toe with future Hall of Famer Drew Brees, throwing three touchdowns and earning a 112 passer rating. It’s a steep learning curve, and Allen has shown he’s capable of keeping up with some of the game’s best players at its most important position.

“There's probably a million different things I've learned this year that I've tried to incorporate in a game,” Allen said. “But I think the biggest thing for me has been just trying not to make the same mistake twice and just really learning from that.”

“The guys that really become great, become really consistent, are the guys that just don't make the same mistake twice.”

While a player like Aaron Rodgers was a first-round selection, he weaponized the sleight, believed in his ability and became one of the best quarterbacks of all time. Russell Wilson, a third-rounder, shaped himself into a perennial MVP frontrunner. Even in the Panthers’ recent history, Jake Delhomme worked his way into a Pro Bowler despite not being drafted and bouncing around practice squads. Allen is cut from a similar cloth, and he’s not taking the task in front of him lightly.

“It's different now that I know that I'm playing the rest of the season and there's a responsibility,” Allen said. “There's a weight to it, and you understand that the quarterback is the most important position in all of sports—you have the ball in your hands every play and you can decide whether your team will have a chance to win or not at the end of the game.”

Kyle Allen is a client of VaynerSports.