Is LaMelo Ball the Next Jason Kidd? 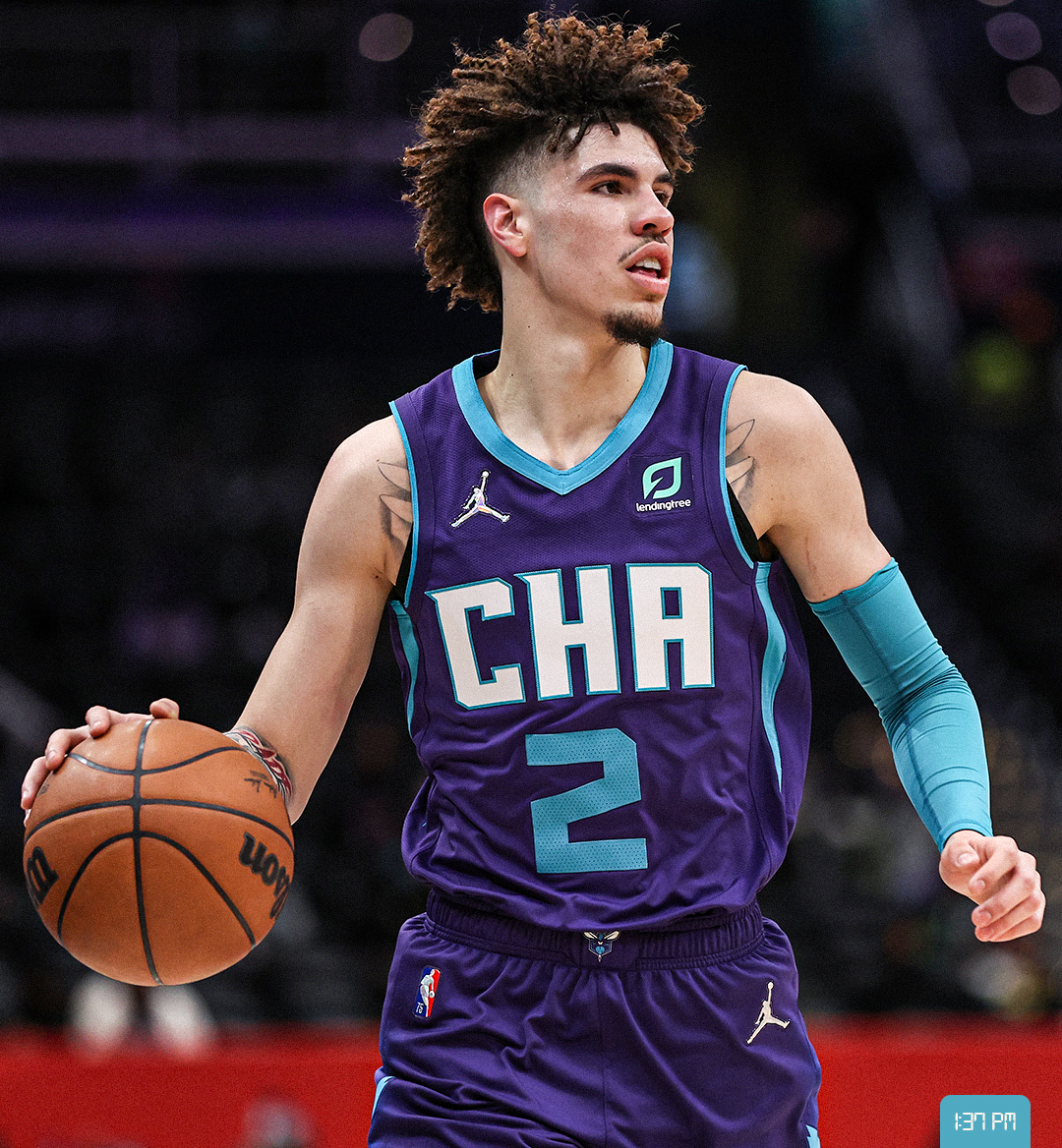 Once upon a time, when basketball was a more simple game, point guards were typically not known for their size. Tiny warriors like Bob Cousy, John Stockton, and Isiah Thomas were the prizes of the position. Of course, there were anomalies like Magic Johnson and Oscar Robertson, but those unicorns felt more like exceptions to the rule than archetypal mainstays.

By the turn of the century, though, Jason Kidd made the super-sized floor general a permanent part of our NBA landscape. Since Kidd’s two Finals runs with the Nets, many GMs have taken flyers on larger guards in the hopes of finding his successor. A few have flamed out. Others have found some success. But no one has quite been able to emulate the level of impact Kidd achieved at his apex (2nd in MVP voting in 2001-02).

Enter LaMelo Ball. At 6’6, the youngest of the Ball trio possesses a rare combination of size and court vision that has led many to compare him to Kidd. As we know, comparisons are cool in theory, but how is this analogy playing out in practice? Can the progeny ever reach the level of the progenitor?

On offense, the parallels between these two go well beyond their physical dimensions. Saying that either of these guards were merely good playmakers would constitute a disservice because these two grade out among the best of their eras:

As the above chart shows, Ball and Kidd both rank well into the top ten among guards in Passer Rating, Box Creation, and Offensive Load, statistics that measure both a player's efficiency and volume.

Along with their playmaking chops, the two guards share a penchant for ripping and running out in transition.

Where Ball is still lacking is in his efficiency in these situations. You see, Ball has got Jay Gatsby’s flair for grandeur. And while that’s a beautiful thing and part of what makes him so special, it sometimes leads to him choosing the extravagant pass over the efficient one.

On this play, he opts for the flashy one-handed dime to James Bouknight in the corner over the potential rim assist to Mason Plumlee. His eye manipulation here was wonderful (per usual). But the problem is that Plumlee is a 73% finisher around the rim (1.46 PPP) with only a much smaller Conley there to offer resistance, while Bouknight is shooting 35.7% on catch and shoot threes (1.07 PPP) and staring down a Bogdanovic closeout.

Against the Suns, a 4-on-1 sequence for the Hornets only amounts to free throws because Ball decides to go behind the back to Oubre (the offensive player Booker was in the best position to make a play on) rather than known aeronaut Jalen McDaniels or his partner-in-crime, Miles Bridges.

Despite the Hornets being second in pace this season, they are only 21st in points per transition possession, and I believe this is at least in part because of Ball’s decision-making in these spots.

In contrast, Kidd’s Nets were never nearly as fast (9th in pace at their best), but they were able to make the most of their opportunities on the break because the man behind the wheel operated with the efficiency of an early 2000s Prius.

In the play above, his choice seems simple, but look closely, and there’s a lot more nuance involved. Kidd sees the backline defender cheating over to Jefferson and knows that the pass to Harris will force him to shift over just enough that it will give the normally dangerous Jefferson a chance to finish at the rim. The great ones almost always predict the extra pass!

To reach savant status as a transition conductor, Ball will need to strengthen his decision-making while moving at full speed. And speaking of strength, Ball also needs to learn how to leverage his size advantage at the guard position to torture smaller defenders in the post.

When Kidd wasn’t going blitzing opposing defenses in transition, he could create offense in the halfcourt by operating out of the post. In a 2006 playoff game against the Heat, Kidd scored on Jason Williams on three consecutive possessions by bullying him down low. On the third possession, Williams tries jumping the passing lane because he knows if Kidd receives the entry pass, he will muscle right through him (hint: White Chocolate's gamble doesn't pay off).

While not nearly as prevalent as it once was, post-centric offense is a great way to force double teams and create high percentage looks for your teammates, especially in the playoffs when the game slows down. In today's game, we've seen Jrue Holiday, a guy who is a notch below Ball as a playmaker, create efficient offense in these situations (number one in PPP among guards), so imagine how lethal Ball could be if he added this facet to his game.

Like Kidd, Ball isn’t a great scorer at the rim or in the mid-range (35th and 40th percentile for his position, respectively), so making the most of his transition opportunities and superior size may be his only hope for raising his offensive ceiling.

J-Kidd was an excellent offensive player during his time, but the reason he’s widely recognized as one of the 75 best players ever is because of the unique value he provided on the defensive end of the floor. From 1997-2013, Kidd averaged over a 1.0 in Defensive Box Plus-Minus (DBPM) and was a part of nine top-8 defenses during that stretch (per Basketball Reference).

Kidd was the rare player who could both quarterback an offense and spearhead the point-of-attack on defense. He weaponized his size and high basketball IQ to keep players in front of him and make their existence a living h-e-double hockey stick. In his 2002 playoff battle against Baron Davis, he held the All-Star to 7 percent below his normal True Shooting average (per Basketball Reference).

Even at 32, Kidd was a good enough defender to keep up with The Flash himself.

The Hornets currently dwell at the bottom of the league in defense (28th in defensive rating). Their ineptitude doesn’t lay solely on Ball’s feet, but his poor defense isn’t helping things either. Right here, the lowly Rockets get back-to-back easy buckets courtesy of LaMelo The Friendly Ghost.

Because of LaMelo’s deficiencies on-ball, Rozier is often tasked with point-of-attack responsibilities, which doesn’t really lead to a much better result. At a glance, one-number metrics like D-DRIP, D-LEBRON, and DBPM all paint the 2021-22 version of Rozier as a negative defender. And if I had to guess, this is probably because of the heavy on-ball load he’s forced to handle.

Even with his on-ball flaws, Ball provides value with his presence in the passing lanes. In his first two seasons, he’s ranked in the 95th and 84th percentile in steal % for his position, respectively (per Cleaning the Glass); the same court-mapping talent he displays as a passer allows him to be a dangerous playmaker with his off-ball defense.

Unfortunately, not all his attempts get converted into steals. Too often, he tends to sell out too hard on his help, and he ends up compromising his team’s defense because of it.

When Kidd wasn’t directly involved in the action, he would freelance into a zone while simultaneously keeping tabs on his man. In this clip, notice the difference in how he helps out in the post. Unlike Ball, his attempt at a sneak attack never endangered his team because he remained in close enough proximity to recover once the kick out occurred.

Ball’s instincts and length are enough to make him a net neutral/slight positive defender overall, but Kidd wasn’t just a slight positive defender. He was one of the greatest perimeter defenders the league has ever seen. For Ball to have a chance at reaching that threshold, he’ll need to become a better on-ball defender and a more disciplined off-ball one.

I have the utmost confidence that with better defensive personnel around him, LaMelo Ball can be in the closing lineup of a top-10 defensive team. However, there’s a big difference between being part of a successful defense and being the reason for a defense’s success. In this sense, Kidd wasn’t just a part of great defensive teams—he was often their first or second-best defender. Guards very seldomly anchor defenses (unless you're Alex Carus-God), and I don’t see Ball being an outlier in this regard.

Yet that doesn’t mean all hope is lost. What Kidd may have over Ball in defense, Ball can make up for with his offensive upside. At his best, Kidd was a near-complete player. He could pass, defend, rebound the whole nine yards. But he never really was a consistent shooter. In fact, Kidd was once infamously gifted the nickname “Ason” because of his lack of a jumper.

From 1994-2007, Kidd shot 33.3% from three (per Basketball Reference). Meanwhile, this season, Ball is shooting 39.3% on his seven attempts from downtown, which is good enough for 73rd percentile at his position (when you remove end-of-quarter heaves). His outside shooting is part of the reason the Hornets are currently 3rd in the league in offense with a relative offensive rating of +3.1. In just his second season, Ball is quarterbacking an attack that rivals nearly any offense that Kidd engineered in his prime.

Considering that Ball is still only twenty years old, there’s a chance that he unlocks a level that Kidd never could offensively. If he does that, there’s a chance that the student surpasses the master. But even if he doesn’t, it’s still almost certain that LaMelo Ball is in for a great career in his own right.