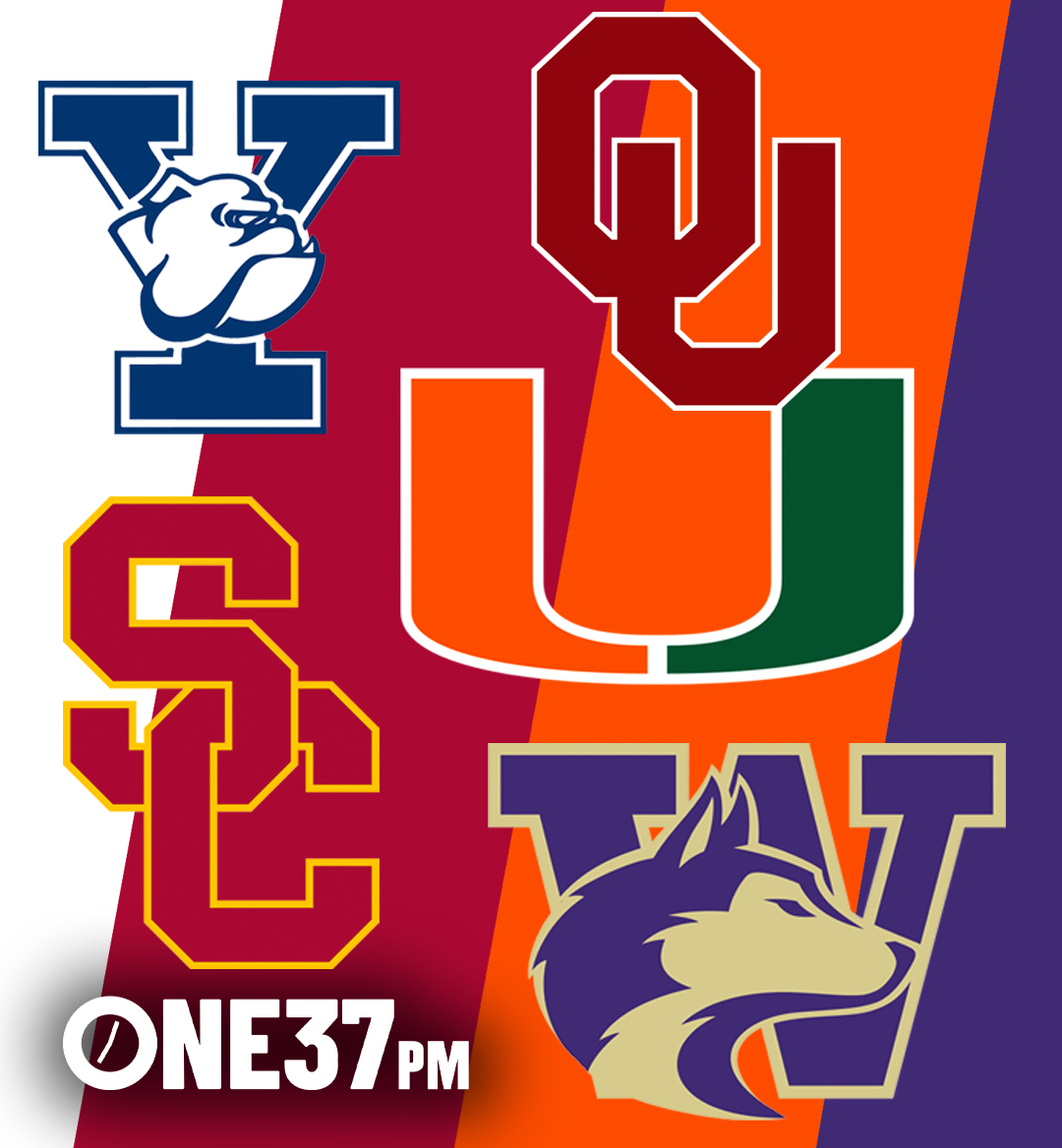 When it comes to winning, Michael Jordan said it best: “I’ve missed more than 9000 shots in my career. I’ve lost almost 300 games. 26 times, I’ve been trusted to take the game-winning shot and missed. I’ve failed over and over and over again in my life. And that is why I succeed.”

For these college football teams, winning was their bread and butter. Many of these streaks are from as far back as the 19th century and remain untouched to this day. As connoisseurs of the art of winning, we at ONE37pm needed to examine the 15 longest winning streaks in the history of Division-I college football. 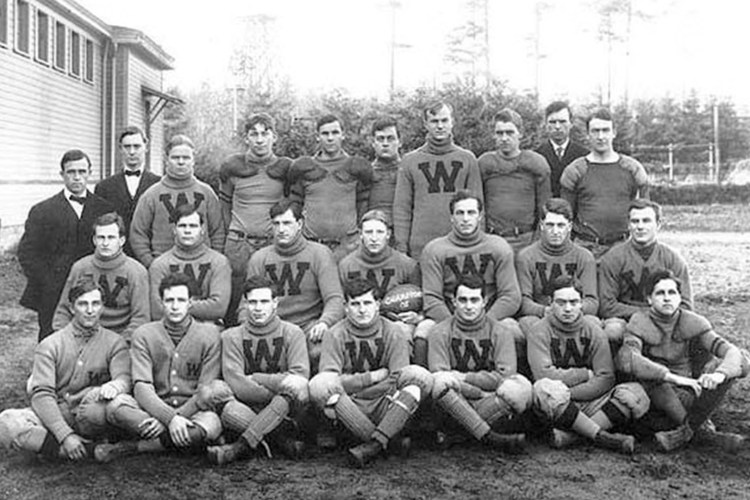 The Washington football team from 1908 to 1916 won 59 straight games over eight years under the leadership of Gil Dobie. Per Lynn Borland of the Seattle Times, Dobie accumulated  59-0-3, a record that has not been duplicated. The University of Washington was not considered a major college football team during this era.

Oklahoma holds the NCAA record for most consecutive victories from an extensive collegiate program at 47-straight. Their streak spanned five seasons, from 1953 to 1957. The OU lost to Notre Dame 28-21 when the 1953 season opened and tied Pittsburgh 7-7 the following week. The Sooner’s streak began with a 19-14 victory over arch-rival Texas in the Cotton Bowl in Dallas in October of 1953. 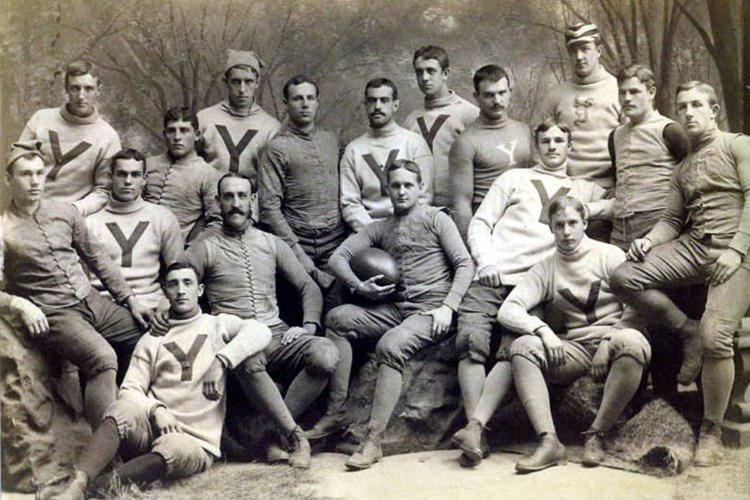 The Yale Bulldogs football team went 37-0 from 1887 to 1889. The first season they went 9-0. The following season, they continued their winning streak, winning 13 straight games. During the 1888 season, they did not allow a single point and beat their rivals by a total of 694 to 0. During the final season of the 37-win streak, they went 15-1, with the only loss coming to Princeton University in the season’s final game.

The Bulldogs held their opponents on goal in 12 games and beat all opponents by a total of 664 to 31. 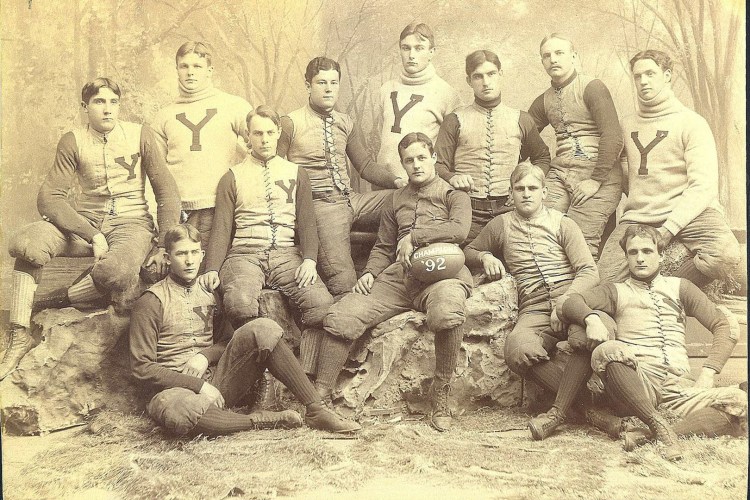 After losing to Princeton University 10-0 at the end of the 1889 season, Yale went on another 37-game winning streak during the next three years.  In its third year under head coach Walter Camp, the team established a 13-1 record, recorded 12 shutouts, and beat all opponents with a total of 486 to 18. Their only loss was to rival Harvard with a score of 12–6.

After their loss to Harvard, they didn’t see a loss again for the three years until they faced Princeton in the 1893 season’s final game.

Toledo’s 1968 season ended with a three-game losing streak, but they followed it up with three perfect seasons straight. Quarterback Chuck Ealey, who threw for 5,000 yards and scored 42 touchdowns in three years with the Rockets, took the series to the field. After Lauterbur's departure to Iowa after the 1970 season, assistant John Murphy coached the Rockets to a record-breaking 12-0 in 1971. 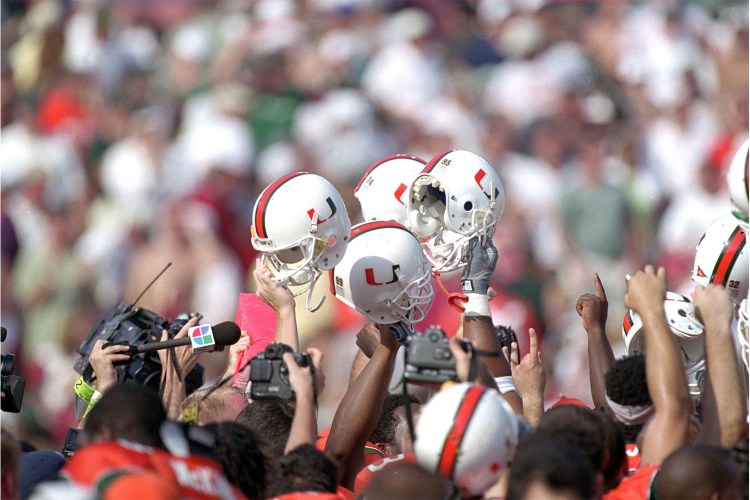 At the start of the 21st century, Miami was the first school to accumulate 30 victories in the new millennium. The winning streak started under Butch Davis, who ended his career with the Hurricanes with ten consecutive wins following a Week 2 loss to Washington in 2000. After a Sugar Bowl victory over Florida, Davis moved to the NFL, and Larry Coker took over.

During the first year of Coker, Miami enjoyed its first perfect season since 1991. They went 12-0 and won the school’s fifth national championship with a 37-14 win over Nebraska in the Rose Bowl. This 2001 squad was propelled by a defense that included Ed Reed, Jonathan Vilma, Phillip Buchanon, and more. 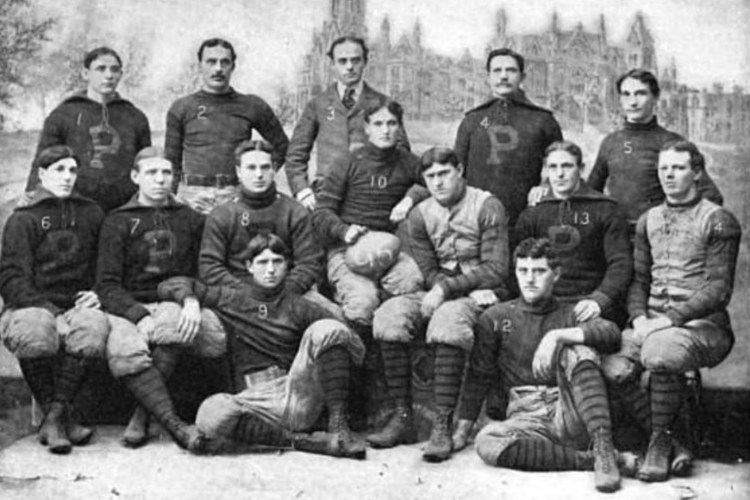 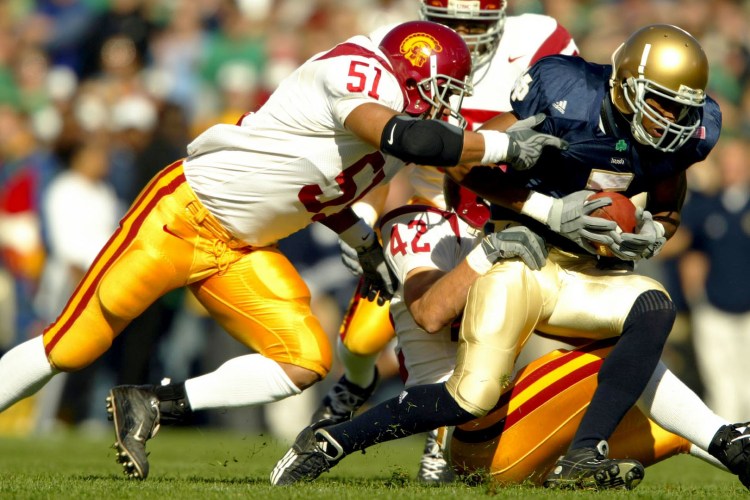 This series went on from the fifth game of the 2003 season to the epic 2006 Rose Bowl. This streak is not in the record books though, because most of the wins have been canceled due to NCAA violations. Nevertheless, the win streak by USC still happened, and we were all glued to our seats. 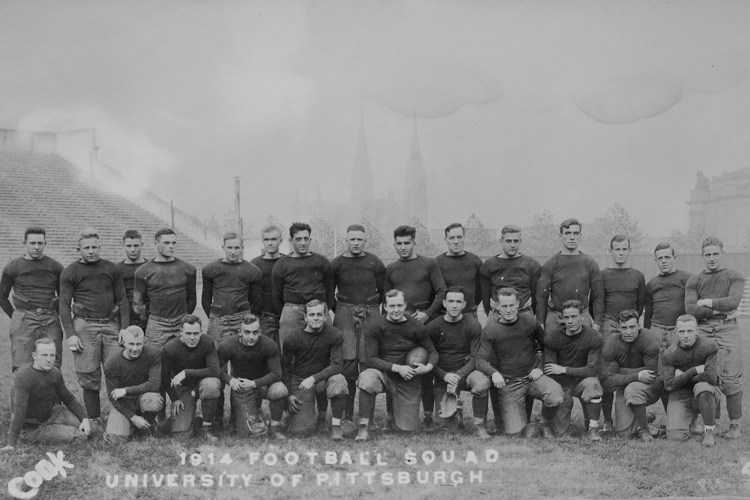 In its second season under head coach Joseph Duff, the team compiled an 8–1 record and outscored all opponents by a total of 207 to 38. The following season, the team went unbeaten with an 8-0 record, outscoring their opponents by a combined total of 247–19 under Pop Warner. In his second season with Pittsburgh, Pop Warner went 8-0; over the next two seasons, they went 15-1.

In their second year under head coach Bud Wilkinson, the Sooners tallied a 10-1 record (5-0 against the conference opponents), winning the Big Seven Conference Championship. They beat their opponents by a combined total of 350 to 121. Two Sooners received All-American honors in 1948, Buddy Burris and Jack Mitchell.  Six Sooners were recognized at all conferences: Burris, Mitchell, Owens, Paine, Thomas, and Walker. The following season, they went undefeated with an 11-0 record, and in 1950, the Sooners finished the season with a 10-1 record.

Texas led its Wishbone offense into an undefeated regular season with a national championship the following year. During the 1970 regular season, they were perfect again; however, the streak ended at 30 with a loss to Notre Dame in the Cotton Bowl. 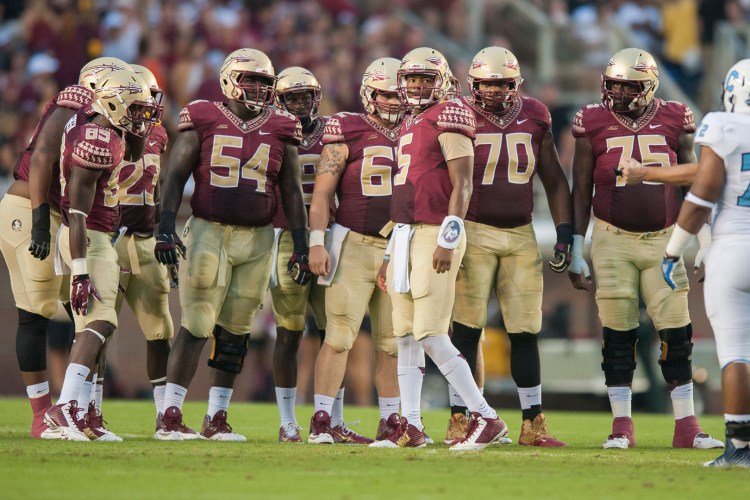 The Seminoles series kicked off with a 21-15 win over Georgia Tech in the 2012 ACC Championship. The following year, the eventual Heisman Trophy winner, Jameis Winston, led the team towards a perfect season and the final BCS national title. Florida State was more neglected the following season but still stayed undefeated and won the ACC title again. Then in the first-ever College Football Playoff match, Oregon blew out the 'Noles 59-20. 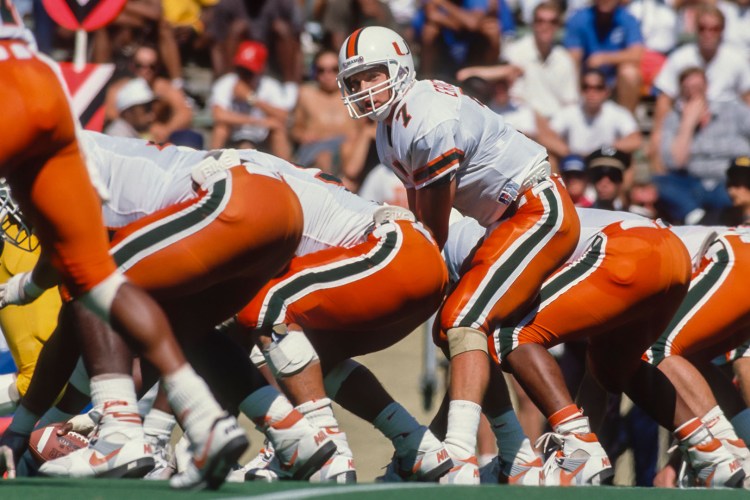 The Hurricanes lost to Notre Dame in the sixth week of the 1990 season but won their final six games, including a 46-3 Texas win in the Cotton Bowl. They were perfect the following season and won the national championship. Miami subsequently went 11-0 during the 1992 regular season but was beaten by Alabama in the Sugar Bowl on New Year's Day. 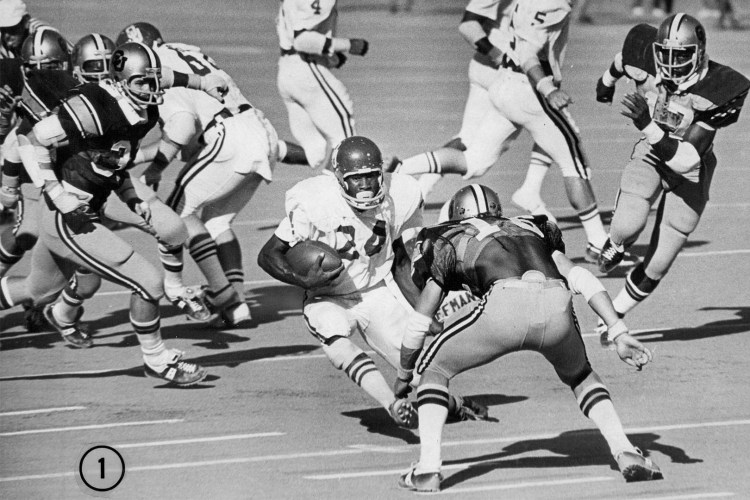 Except for a 7-7 tie with USC in the second game of the 1973 season, the Sooners win streak would actually have been 37 games.  When they were banned from bowls and television, Oklahoma went 10-0-1 in 1973 and 11-0 in 74, winning the national championship. The Sooners won their first eight games in 1975 but turned the ball over eight times against Kansas in a 23-3 loss. They bounced back to win their last three games and their second straight national championship. 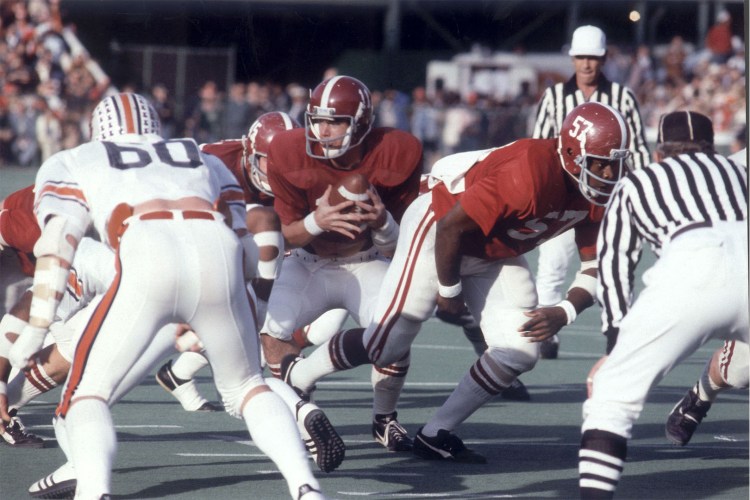