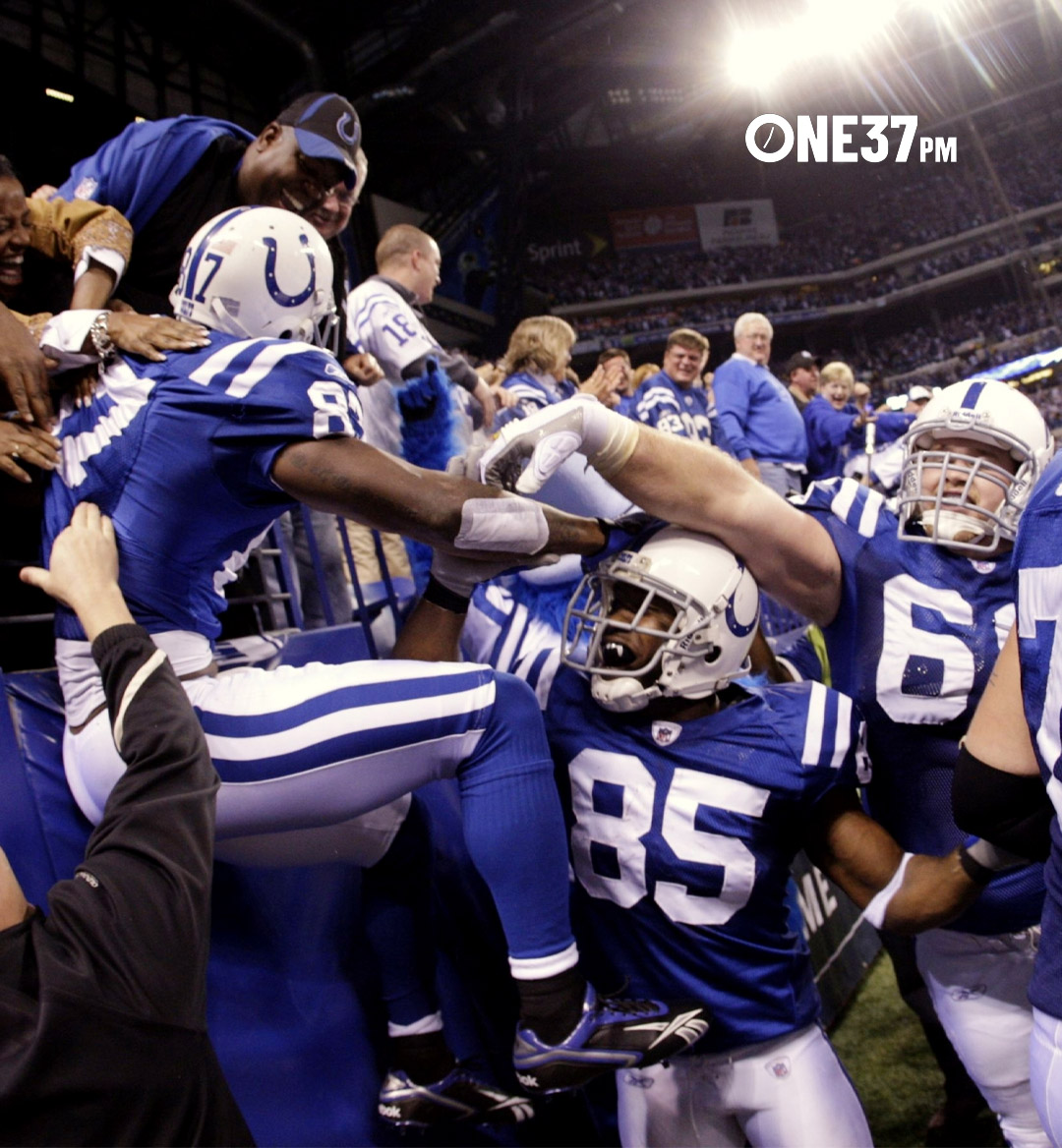 If you are a fan of one of the 25 teams not mentioned on this list, you won't be able to relate to the feeling of not losing a single regular-season game for over one whole calendar year. The fact that three teams made it on this list TWICE (Patriots, Colts, and Bears) is absolutely astonishing.

The level of consistency needed to win even four or five games in a row in any given NFL season, when you consider factors like injury, suspensions, weather, and even good old fashioned luck can not be understated. Every team on this list won at least 16 games in a row!

Of course, it helps when you have a quarterback like Peyton Manning or Tom Brady, but the stories behind some of these streaks, how they stayed alive, and even how they ended, is what makes sports so much fun. 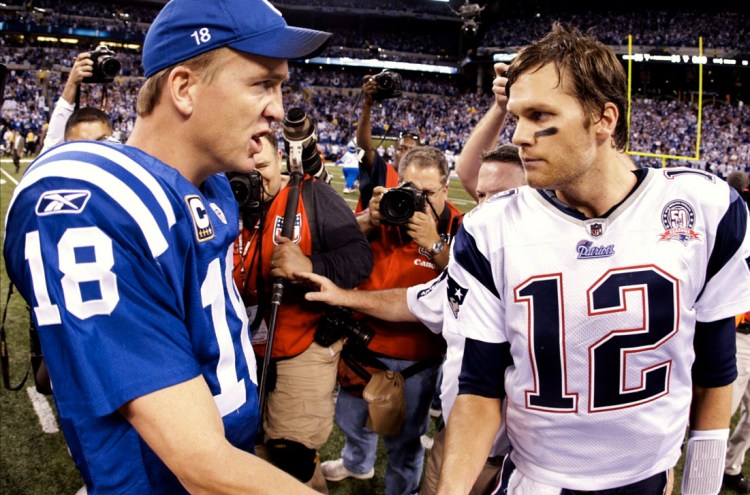 The 2008 Colts started the season 3-4 but rallied to win 9 games in a row to finish the season at 12-4. However, it wasn’t enough to win the AFC South title as the Tennessee Titans finished the season 13-3, and they were upset in the Wild Card round against the San Diego Chargers 23-17.

In 2009, the Colts came out of the gates on fire, winning their first 14 games of the season. With a perfect season in sight, head coach Jim Caldwell pulled the Colts starters a little more than halfway through their week 16 game against the New York Jets. The Jets went on to rally and win by a score of 29-15 and would make the playoffs because of this win (combined with their week 17 win vs. the Bengals). The two teams later met up in the AFC Championship game three weeks later, with the Colts winning 30-17 and punching a ticket to the Super Bowl XLIV, where they would lose to the New Orleans Saints 31-17.

This game had everything you could want in a primetime NFL matchup. You had Peyton Manning vs. Tom Brady in their primes, slinging the ball all over the field. The Pats took an early 24-7 lead, but the Colts fought all the way back and trailed 34-28 with 2:08 left on the clock. Facing 4th & 2 at his own 28-yard line, Bill Belichick famously decided to go for the first down and seal the game, rather than punt. The Colts came up with a huge stop, and Manning went on to throw the game-winning one-yard touchdown pass to Reggie Wayne with 12 seconds left on the clock. 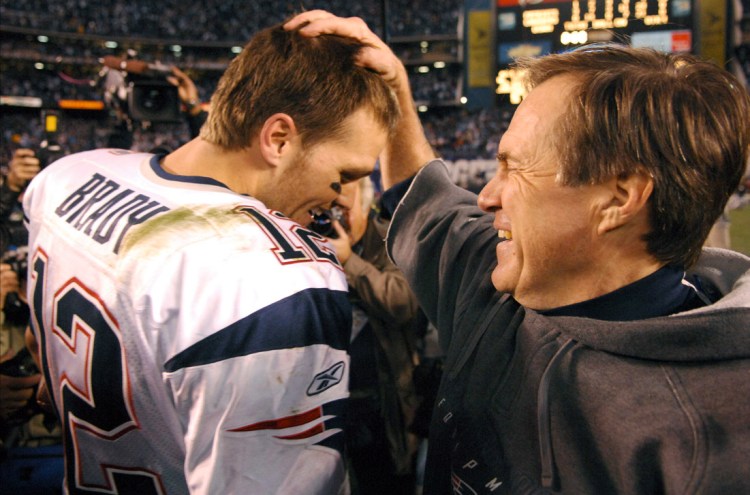 The bulk of this streak took place in 2007 when the Patriots had a perfect 16-0 regular season. This was only the eighth team in NFL history to finish a regular season undefeated, and the first since the league expanded the regular season to 16 games. Of course, their perfect season would be ruined in the Super Bowl when they lost 17-14 to the New York Giants.

In 2009, Tom Brady tore his ACL on opening day against the Kansas City Chiefs and in week 3, the Miami Dolphins would end their almost 2 calendar year long streak of regular season wins.

When this game was played, nobody could have envisioned that it would be a Super Bowl preview. All of the hype surrounding this game was focused on the Patriots finishing their perfect season. The game was otherwise meaningless, as both teams had their playoff positions locked in. Fans wondered if both teams would bench starters in order to avoid a potential injury, but both teams went all-in trying to win at all costs. The result was one of the most memorable games in the modern era. The Giants actually led by 12 points in the 3rd quarter, but the Patriots would go on to score 3 straight touchdowns and win the game 38-35. Even though they lost the game, the Giants gained momentum and confidence that they could play with anybody, and many of their players said that it was the springboard for their unlikely Super Bowl run. 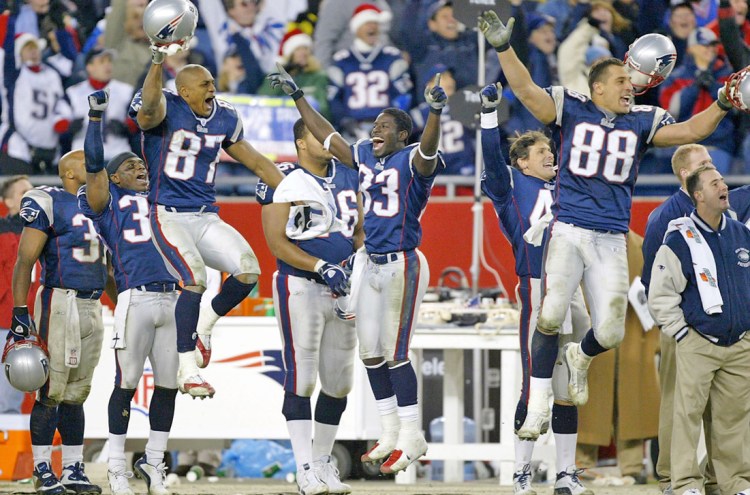 The bulk of this streak came in 2003, where the Patriots won the final 12 games of the season to finish 14-2. They would go on to win XXXVIII vs the Carolina Panthers 32-29 on the final play of the game, an Adam Vinatieri field goal.

An absolutely wild game, as star kicker Adam Vinatieri missed the potential game winning field goal at the end of regulation, kicking it off the right upright. On the first play of overtime, Mike Vrabel intercepted a Tony Banks pass setting the Patriots up for yet another field goal to win the game. This time, the Texans Ramon Walker blocked the Vinatieri 37 yard attempt.

With 41 seconds left in overtime, Vinatieri would line up for a 3rd shot at ending the game, this time kicking the 28 yard chip shot through the uprights to extend the Patriots winning streak to 11 games. 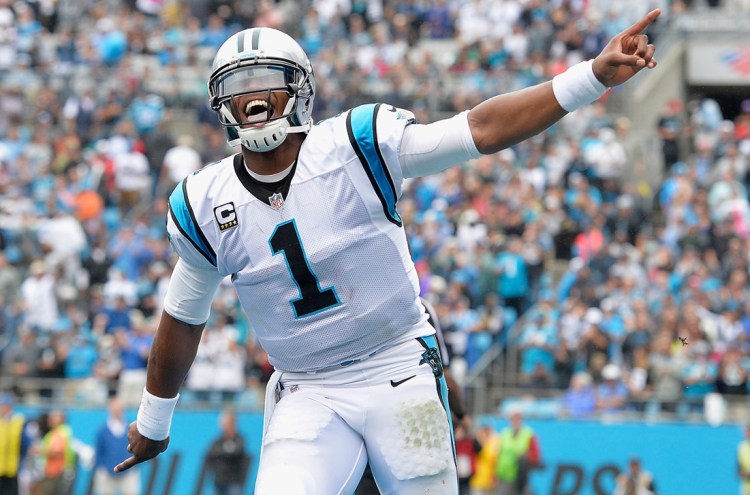 The 2014 Panthers won their final 4 games of the season to finish 7-8-1, which was actually good enough for them to win the NFC South and sneak into the playoffs with a sub .500 record. They were only the 2nd team in NFL history to win their division with a losing record but actually won their Wild Card opener against the Cardinals, eventually losing in the 2nd round to the Seahawks 31-17.

In 2015, they would use the momentum of their strong finish to win their first 14 games with starting QB Cam Newton winning the 2015 MVP. They made it all the way to the Super Bowl, eventually losing to the Denver Broncos in the Super Bowl 24-10.

The Carolina Panthers went into New Orleans and took part in an absolute shootout against Drew Brees and the Saints. Cam Newton would go on to pass for 5 touchdowns, twice leading the Panthers back from 4th quarter deficits, including the game winner from 15 yards away to Jerricho Cotchery with 1:05 to play. This win extended the Panthers winning streak to 16 games and had them sitting pretty at 12-0 on the season. 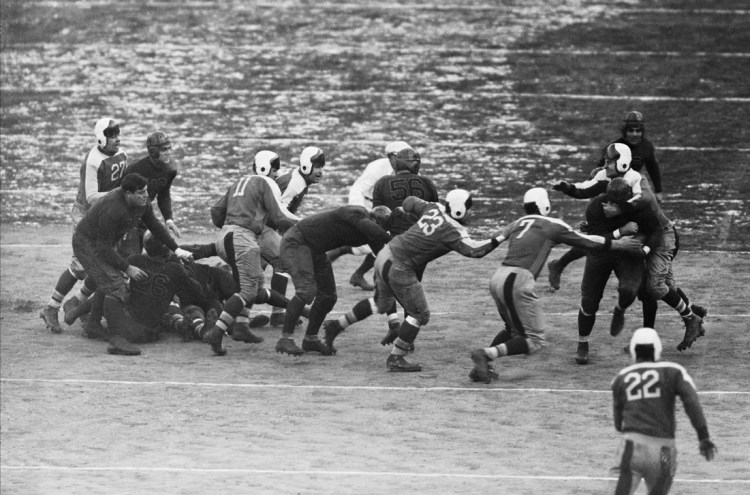 This team was coached by the legendary George Halas and led by bruising running back Bronko Nagurski. In 1933, they finished 10-2-1 after winning the final 4 games of the season, going on to win the NFL Championship against the New York Giants 23-21.

In 1934, the Bears would go undefeated in the regular season, eventually meeting up for a rematch with the NFL Eastern Division Champion New York Giants in the Championship Game, known as the legendary “Sneaker Game”, in which the Giants switched to basketball sneakers at halftime because they provided better traction on the frozen field. After the switch, they would go on to come back from a 13-3 deficit to beat the Bears 30-13.

The Bears beat the Giants 10-9 at the Polo Grounds on the east side of Manhattan in a rematch of the 1933 NFL Championship Game in front of a crowd of 55,000 fans. The Giants took a 9-0 lead into the 4th quarter before the Bears came storming back, scoring 10 unanswered points to secure their 15th win in a row. 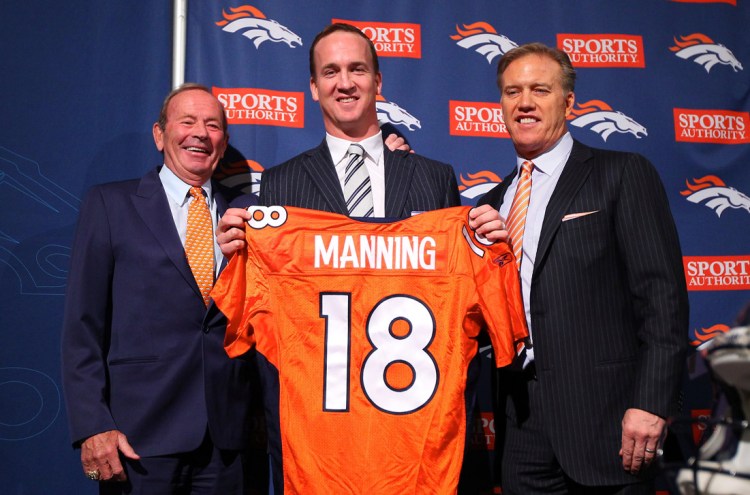 The Denver Broncos were the talk of the NFL entering the 2012 season. They had just traded starting quarterback Tim Tebow to the Jets and signed former Colts QB Peyton Manning to lead the charge. After a slow 2-3 start, the Broncos went on to win the final 11 games of the regular season, eventually losing in the AFC Divisional Round to the Ravens 38-35.

In 2013, they came flying out of the gates, winning their first 6 games en route to a 13-3 finish, culminating in a Super Bowl XLVIII appearance in which they were absolutely trounced by the Seahawks 43-8. The game that broke their winning streak saw Peyton Manning lose to his former team, the Indianapolis Colts, now led by their new star quarterback Andrew Luck.

Peyton Manning vs. Tony Romo in Dallas, a shootout for the ages! Romo threw for the first 500 yard game in Cowboys history, including 5 touchdowns, while Manning had 414 yards and 4 touchdowns. With the score tied 48-48 and Denver poised to score the go-ahead touchdown with under 2 minutes left, Denver faced a 3rd and 1 from the Dallas 2 yard line. The plan was to pick up the first down, but not the touchdown, as the Broncos did not want to give Tony Romo a shot to tie up the game. The plan worked to perfection as Knowshon Moreno picked up the first down, and the Broncos ran the remainder of the clock out, setting up the game-winning field goal as time expired. 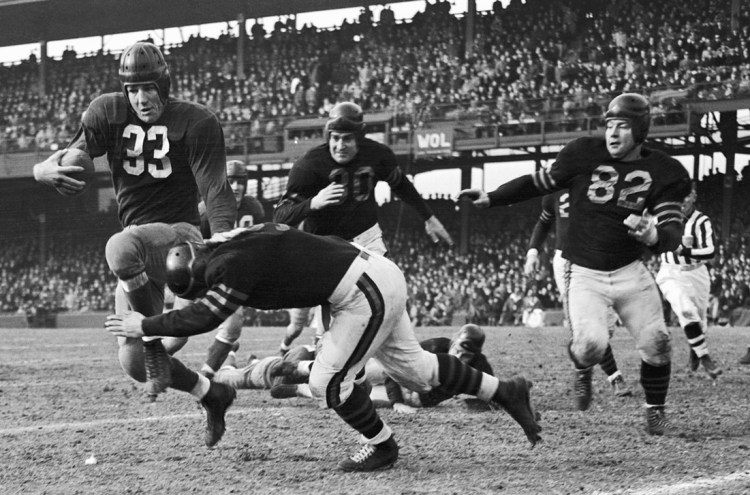 The 1941 Bears went 10-1, their only blemish a week 6 loss to the Green Bay Packers. They would go on to win the NFL Championship, against a familiar foe, the New York Giants 37-9. The following season, they went 11-0 but were somehow upset by the Washington Redskins in the Championship game 14-6.

The 1942 Bears are frequently mentioned as the most dominant team in the history of football, scoring 376 points that season and giving up only 84. In their last 6 games, they shut out their opponent in 4 of them by a combined score of 140-0.

This game was actually tied 0-0 after the first quarter before the Bears rattled off three straight touchdowns. Running back Gary Famiglietti ran 12 times for 101 yards and 2 touchdowns. Wide Receivers Hampton Pool had 2 catches for 118 yards and a touchdown, and Ray McLean had 4 catches for 109 yards and a touchdown. The only reason this game was memorable is that the Rams actually put up a fight earlier in the season, losing by a relatively small margin of 21-7. 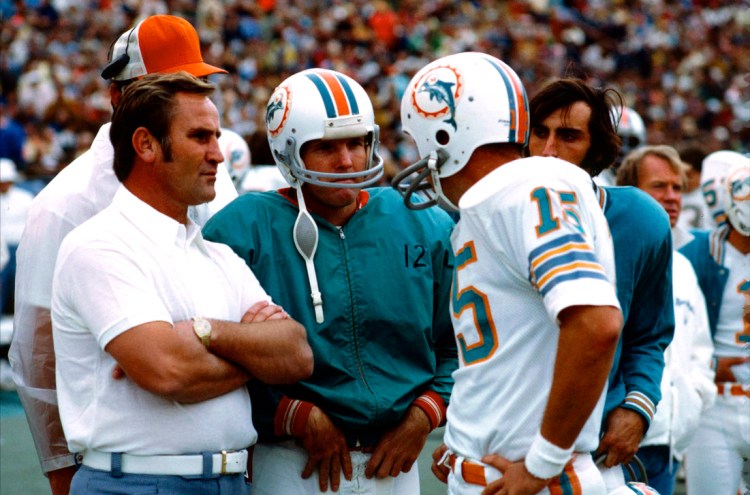 The 1972 Dolphins are the last team to have a perfect season, and still to this day send champagne to the team who defeated the sole remaining undefeated team. This streak actually started in the final week of the 1971 season and continued through week one of the 1973 season.

The New York Jets actually led in this game 17-7 on the strength of a Joe Namath touchdown pass and a John Riggings touchdown run. The Dolphins came back and were leading 21-17 in the 3rd quarter before Namath threw another touchdown to give the Jets a 24-21 lead. It lasted until late in the 4th quarter when Mercury Morris scored the go-ahead touchdown on a 14-yard run. 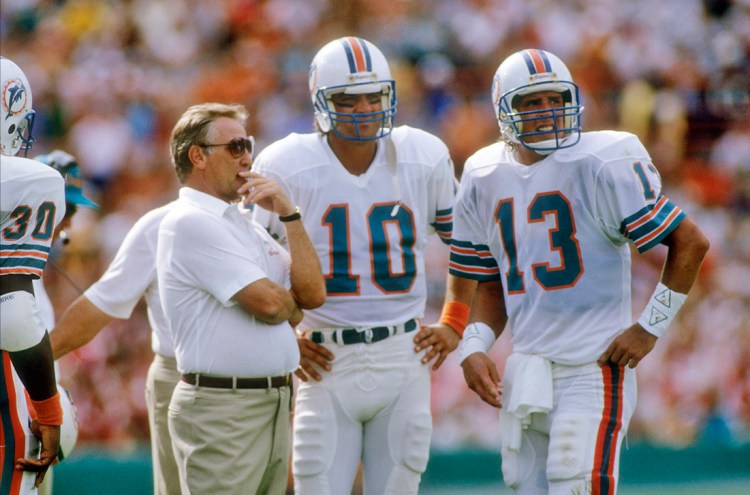 The 1983 season was Dan Marino’s rookie year, and they ended the season on a 5 game winning streak, finishing 12-4 and the AFC East champs. They would go on to lose in the Divisional Round of the playoffs 27-20 to the Seahawks.

In 1984, they started 11-0 and went on to win the AFC Championship against the Pittsburgh Steelers 45-28 before losing to the 49ers in the Super Bowl 38-16. Marino destroyed league records in ‘84, throwing for 5,084 yards and 48 touchdowns, however was the final time in Dan Marino’s career that he would make the Super Bowl.

Philadelphia, despite their 4-5-1 record, actually led this game 17-7 in the 3rd quarter before the Dolphins rallied and took a 24-17 lead. The Eagles scored what looked to be the game-tying touchdown on a Ron Jaworski pass with less than 2 minutes left in the game, but the Dolphins blocked the extra point, preserving the winning streak. However, they would lose the following week to the San Diego Chargers, ending it at 16. 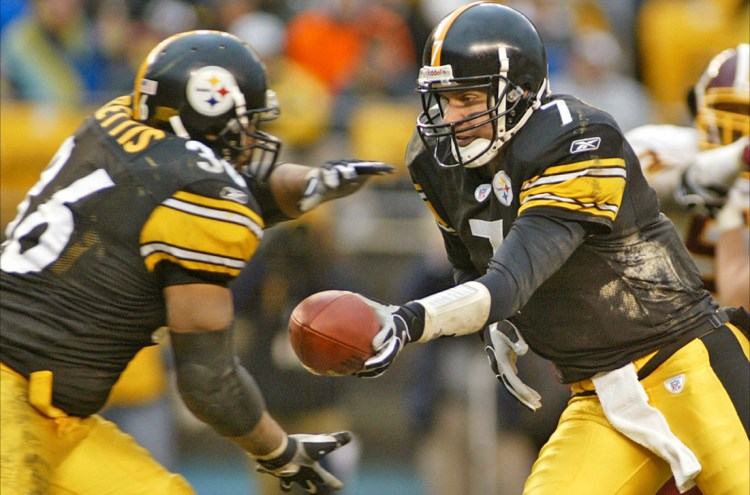 The 2014 Steelers went 15-1 with hotshot rookie quarterback Ben Roethlisberger under center, eventually losing in the AFC Championship game 41-27 to the New England Patriots. Roethlisberger actually started the season on the bench, until incumbent starter Tommy Maddox was injured in a week 2 loss to the Baltimore Ravens. He would go on to go 13-0 as starter, winning the AFC north.

This matchup featured two of the top quarterbacks from the famed 2004 class that included Roethlisberger, Manning and Philip Rivers, three future Hall of Famers. In this game, Roethlisberger threw for a season high 316 yards and set up the Steelers go-ahead touchdown with 4:57 left. Going back to college, this was actually Big Ben’s 25th straight win in games that he had started.