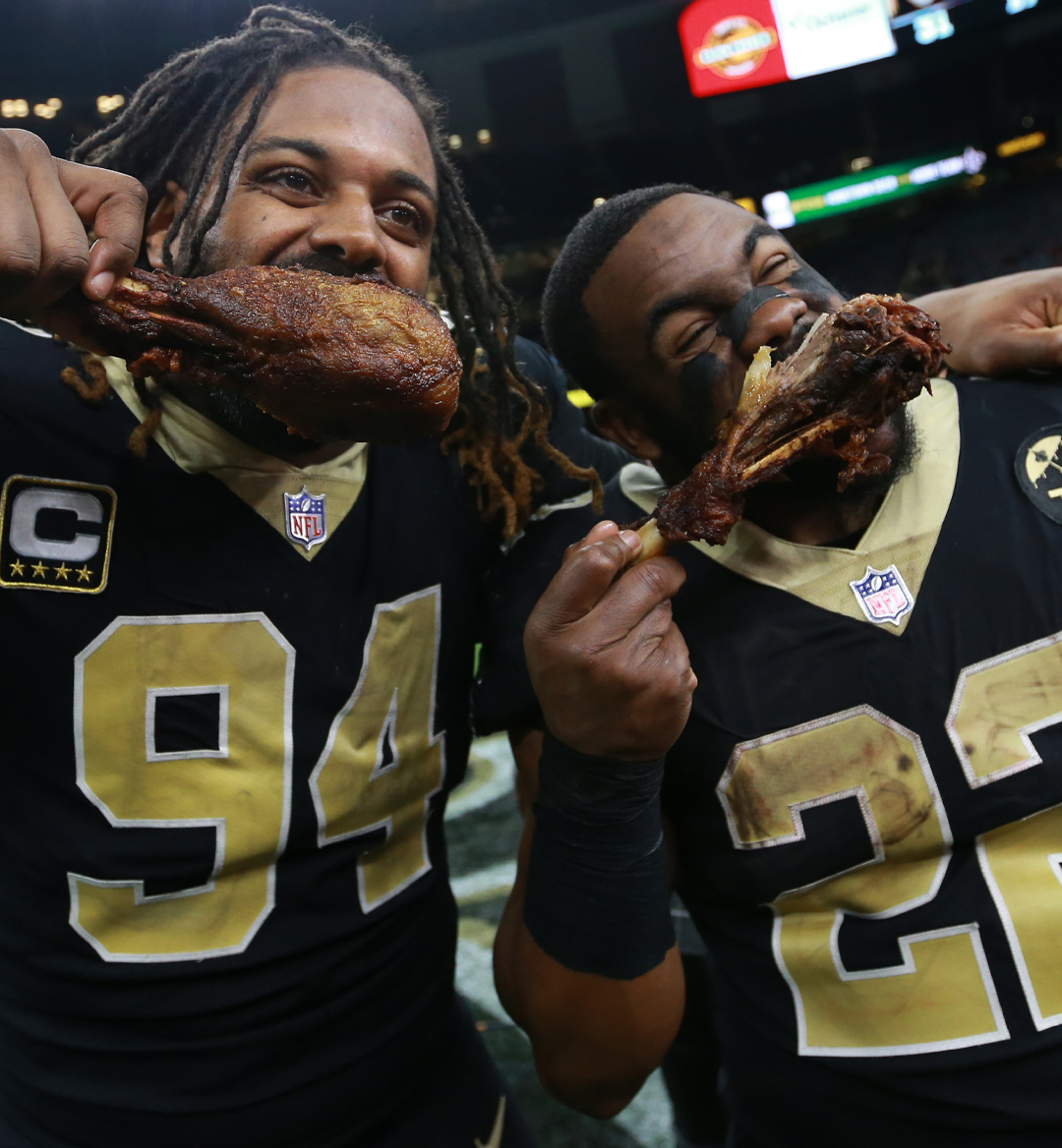 As far back as 1869, football has been played on Thanksgiving, and the National Football League has taken full advantage of the fact that Americans across the country are gathered together and will plop down in front of the television before, after and in between courses. Sure, your uncle and cousins might be getting into an argument over politics, but football always offers a nice respite from the chaos.

One need only look at the ratings for the NFL’s Thanksgiving games to get a good idea of how important the holiday is to the league. It is, by far, the NFL’s best day for ratings, outside of the Super Bowl and the playoffs. Week to week, most games average 10 to 20 million viewers each, but the games on Thanksgiving see the ratings spike close to 30 million people. In fact, sometimes they go well over that benchmark; the Cowboys-Redskins matchup in 2016 had over 35 million viewers.

In 2017 the ratings dropped by a small margin, thanks in no small part to the controversy surrounding Colin Kaepernick and the national anthem as well as the fact that the games just weren’t very good. According to Ad Age, the game between the Los Angeles Chargers and the Dallas Cowboys had an audience of 26 million. By comparison, 2016’s highest-rated contest between the Dallas Cowboys and Washington Redskins drew a viewership of over 35 million. Even with the drop in ratings, the ad revenue the NFL receives from sponsors is substantial. With Thanksgiving serving as the perfect excuse to sit is in front of a TV, the league will continue to remain heavily invested in the holiday. 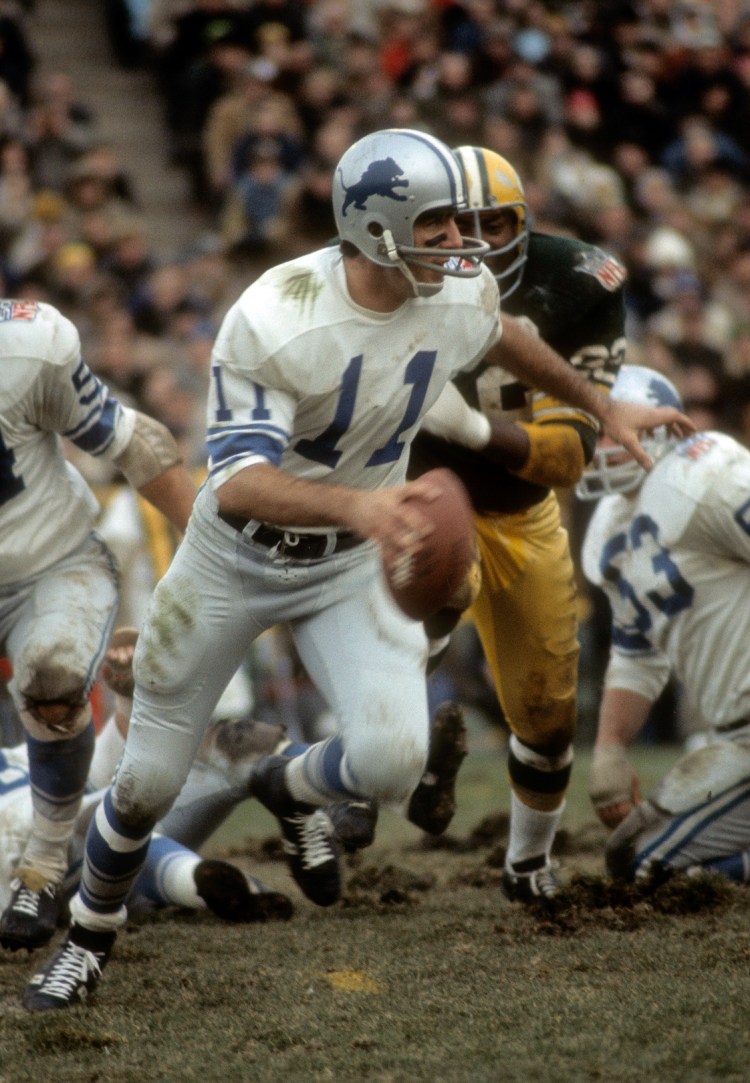 The modern NFL (there was another “National Football League” that existed prior to today’s NFL) has played games on Thanksgiving basically since its inception. The first Thanksgiving games took place in 1920 between teams like the Akron Pros, the Canton Bulldogs and the Detroit Heralds.

From 1920 onward, football and Thanksgiving have been in lockstep. Professional football has been played on the holiday every single year with the exception of the years 1941–1945. World War II obviously had a massive impact on society in the United States and sports were no exception. Twenty-one men involved with the NFL—19 players, an ex-head coach and an executive—lost their lives in World War II. Football on Thanksgiving, and in general, took a backseat to the war effort but things would pick back up in 1945 once the war had been won. 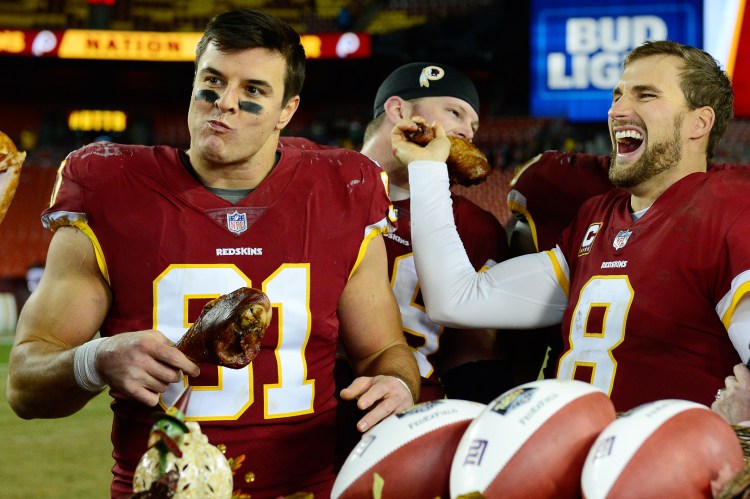 Other than just economics, the NFL's tradition of Thanksgiving games is reason enough for the league to stay invested in the holiday. The two teams most associated with Thanksgiving are the Detroit Lions and Dallas Cowboys, as they have been playing on turkey day for decades now—the Lions since 1934 and the Cowboys since 1966. Viewers have since come to expect, regardless of record or quality of matchup, the Lions and Cowboys to put on a show.

In recent years, the NFL has continued to capitalize on the success of the Thanksgiving games by adding a primetime game to the schedule, and those games have provided their own share of highlight-reel moments including the now infamous Mark Sanchez “butt fumble.” 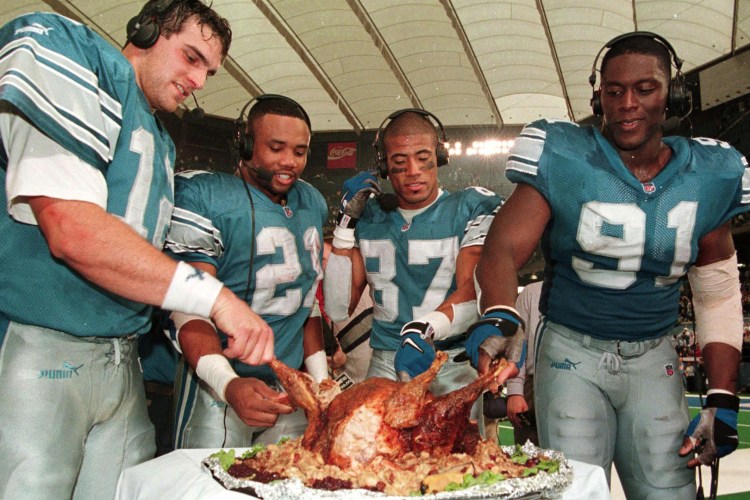 One of the goofier, but still highly entertaining moments of these games is watching the winning team chow down on some turkey in their post-game interviews. It's a nice little victory formation for the team and something that never gets old.

Without question, Thanksgiving has served as a nice crutch for the league, showing that even when ratings and revenues are down, such as in 2017, the holiday will be there to pick up some of the slack.