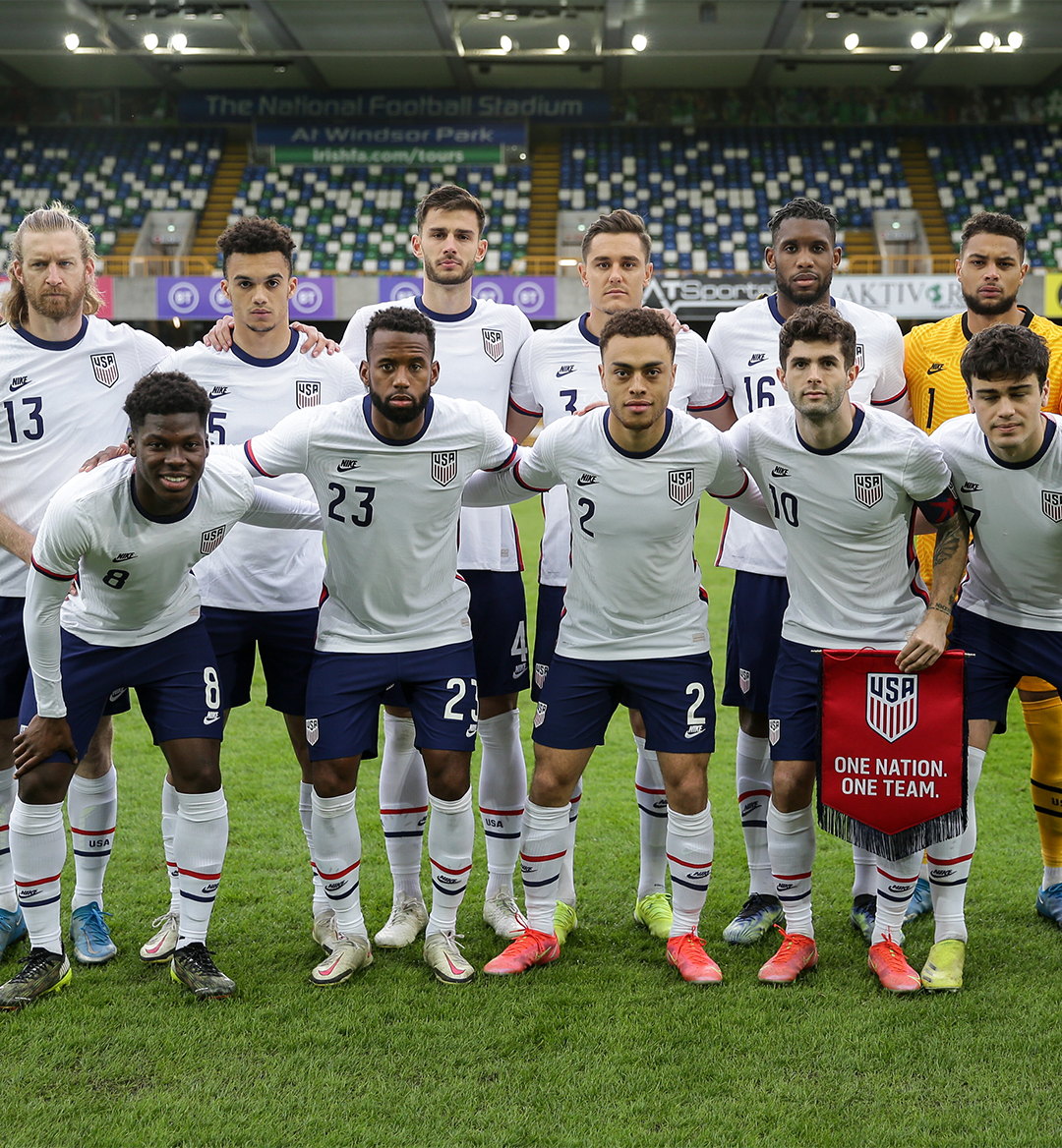 It’s always fun to wonder, right? I’m sitting here and we’re 598 days away from the 2022 World Cup kicking off in Qatar next November. There’s a lot that still needs to happen, including the U.S. Men’s National Team securing their place in the 32-team field, but we’re going to assume that they can get the job done this time around.

If you’re murky on the details of World Cup qualifying or how the USMNT can clear its path towards next winter’s tournament, you can read more about it in another recent article we just dropped.

When the U.S. (likely) steps on the pitch in Qatar next year we’ll be seeing drastically different talent than 2017 when the Yanks were managed by Bruce Arena and featured a squad much older in age. Of the current group of anticipated call ups for World Cup qualifying, it’s hard to imagine anyone older than Jozy Altidore (31) having a shot at making the plane to Qatar.

The U.S. recently secured a narrow 2-1 victory over Northern Ireland in an international friendly, and during that match Gregg Berhalter put out a team with an average age of exactly 23 years old. Since the USMNT’s failure to qualify for Russia four years ago, the path has become clear for success with a new group of players. Younger players.

The days of Michael Bradley, Tim Howard, Omar Gonzalez and Matt Besler are long gone. In fact, the only players that have received USMNT call ups in the past year from that 2017 team that lost to Trinidad & Tobago on the final Concacaf matchday are Christian Pulisic, Kellyn Acosta and Tim Ream.

In a lot of ways it’ll actually be more difficult for Berhalter this time around when it comes to team selection. The sheer talent and youth that the Americans possess right now is astonishing.

Players getting regular minutes at major clubs like Barcelona, Borussia Dortmund and Juventus may have Sergiño Dest, Giovanni Reyna and Weston McKennie sitting pretty in the mind of their national team manager. But what about domestic players competing in Major League Soccer?

There’s a few of them that could work their way into the national team picture over the next 12 months.

James Sands at New York City FC is one of them. His progression in MLS is on the same trajectory as Tyler Adams when he started with the New York Red Bulls. He’s been thrown into various positions and succeeded at basically all of them.

Colorado Rapids left back Sam Vines could potentially be a name that works his way into the discussion as well. The 21-year-old was one of the most consistent players for the U.S. Under-23 team that recently competed for an Olympic bid, but fell short. Vines has steadily progressed with the Rapids and left back is a position the Americans aren’t deep at on the national team level.

Let’s get back to what everyone came here for though and examine my Best XI if the USMNT was competing in the 2022 World Cup right now. 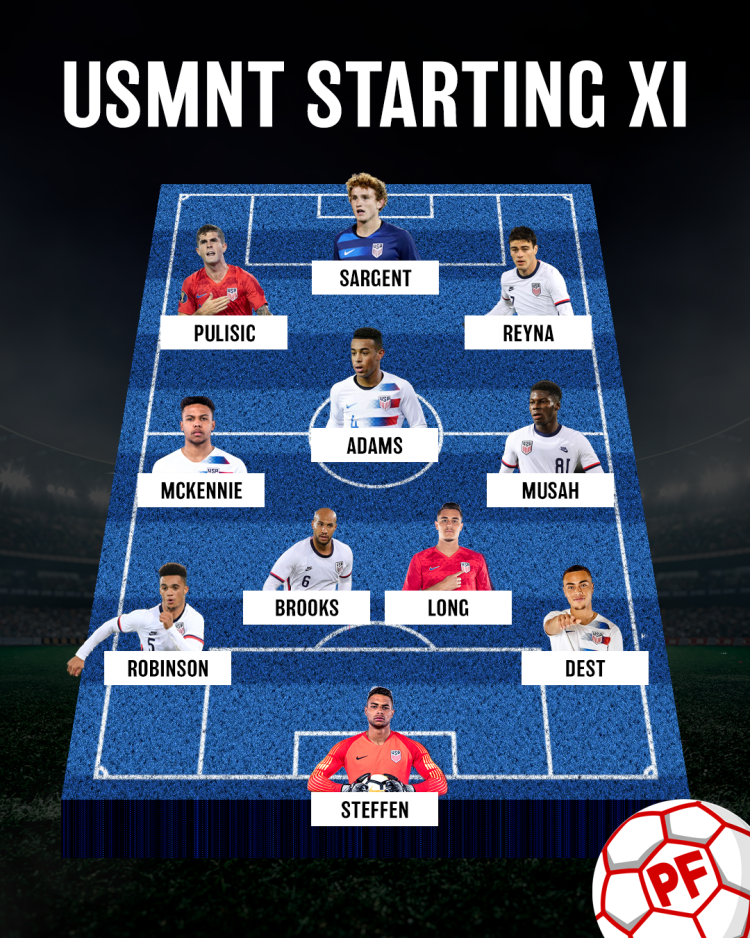 The Manchester City shot stopper has been atop the list of goalkeepers for the U.S. for a few years now after making his move abroad from Columbus Crew SC. There’s definitely competition for the starting role with Ethan Horvath, Matt Turner and Sean Johnson in the discussion as well as young keepers like David Ochoa, Matt Freese and JT Marcinkowski.

That said, it would be nice for Steffen to get more regular minutes in the Premier League, but in his limited time with Man City he’s looked strong with one of Europe’s top clubs. For now, he’s locked in as the starter.

This is where things could get interesting, and I fully expect to be altering this back four as I continue to document my national team thoughts over the next year-and-a-half. Brooks and Dest are seemingly locks given their form for club and country, but Long at center back and Robinson out left could absolutely change in the near future.

Of this mock team, Long is the only MLS player that would start for Berhalter and probably be one of the few players competing domestically to earn a plane ticket next year. Long’s saga with the Red Bulls over a potential move to Europe certainly put a damper on his chances of making a move abroad, at least for now.

And players like Mark McKenzie and Chris Richards are breathing down his back for a chance at a starting spot. I’d actually expect one of these two guys to take over the other central defender role in the next year-plus, but for now Long hangs on to it.

Of all the position groups we go through today, this is by far the easiest set of selections. I won’t be the first or last person to throw these names out there, but Adams, McKennie and Musah should and will be the starting midfield in 2022 barring something completely unforeseen.

McKennie may very well be the most-talented player in this group, while Adams is so versatile and can play just about anywhere on the pitch. Musah’s recent commitment to the USMNT completes a midfield group of three that’s easily the best in Concacaf and arguably one of the best midfield trios in the world.

Pulisic is the face of the national team and similar to Adams, McKennie and Musah, is essentially a lock at this point to play every meaningful national team game moving forward. Striker is where it gets really intriguing for Berhalter and he’s going to have to make a decision and live with it.

Sargent has played quite well for a Werder Bremen side that simply doesn’t have much talent, so perhaps a move is coming for him in the summer, but he’s proven he can shoulder the striker load for the USMNT. Daryl Dike, Nicholas Gioacchini and Jozy Altidore are probably the next three names in line for Berhalter in that No. 9 role.

Dike’s ascent with Orlando City SC and now Barnsley while on loan in England has been significant. It truly feels like he’s on the verge of greatness and it could be a real battle between him and Sargent for regular minutes.

Finally, Reyna is another player that has the benefit of playing at a top club and being surrounded by immense talent; most notably Erling Haaland and Jadon Sancho. The Dortmund winger has had to battle for minutes as of late though, and that’s something to watch out for over the next year, especially with Brenden Aaronson becoming a household name for those that watch American soccer regularly.

Aaronson likely won’t be at RB Salzburg for long because of his quickness, vision and finishing ability. He could very easily find himself coveting a meaningful role with the U.S. very soon.