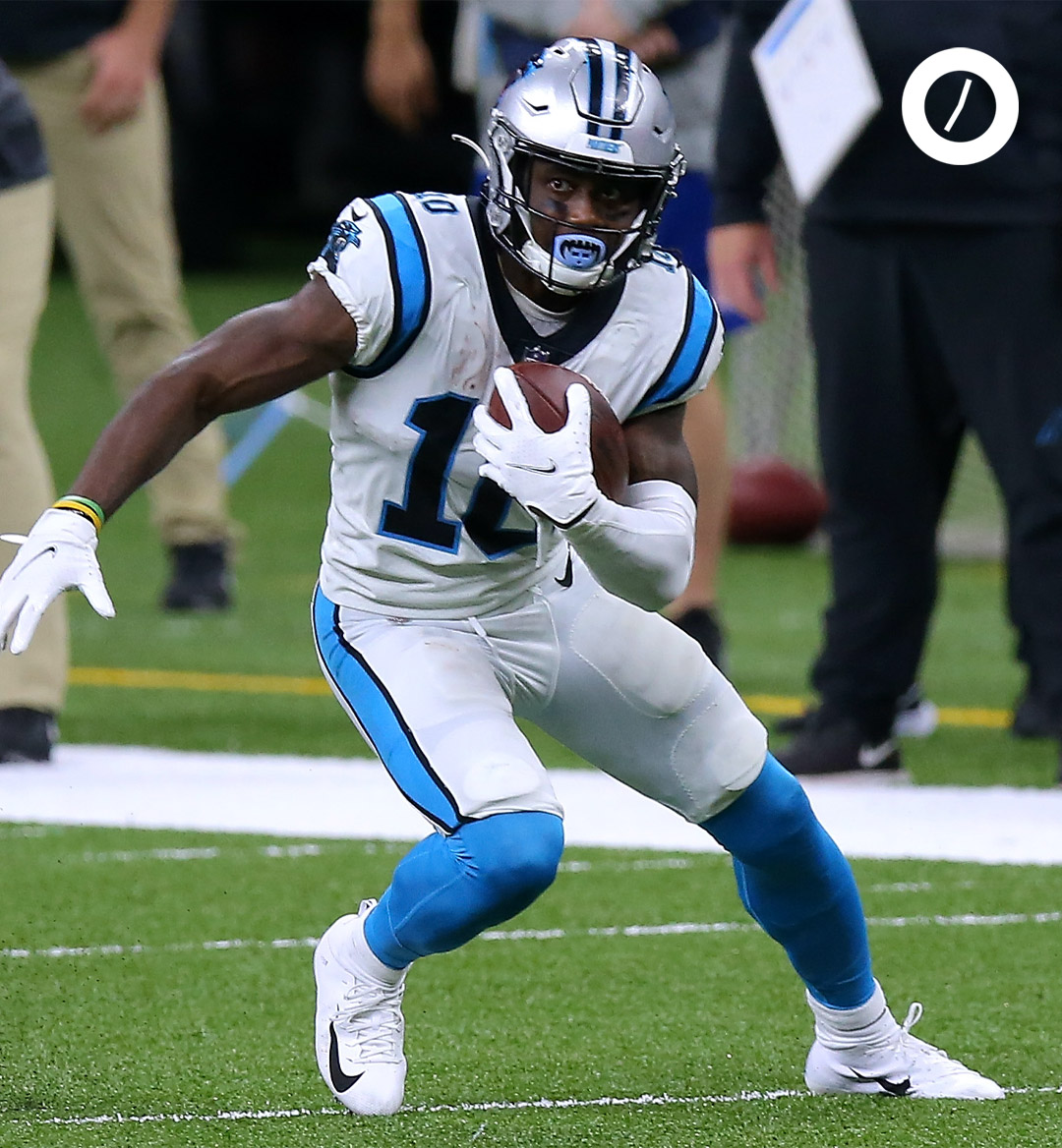 Have yourself a day, Josh Allen! After tragically losing his grandmother Saturday night, Allen responded by turning in an inspired performance Sunday. In her memory, Allen erupted for 415 passing yards and three touchdowns while adding 14 yards on the ground and another score. It may have been the best statistical game of his young career and meant even more, given the circumstances. Not only that, but Buffalo’s “Bills Mafia” has helped raise over $200,000 in donations towards the Oishei Children’s Hospital in his grandmother’s memory. What a great way to honor a special person in his life.

Another guy who made considerable noise for the second straight week was Minnesota Vikings’ running back Dalvin Cook. He gashed the Lions’ defense on the ground and through the air all day long. Cook finished with 252 yards from scrimmage and two touchdowns as Detroit struggled to contain the former FSU Seminole. He’s been on an absolute tear lately, compiling 478 scrimmage yards and six touchdowns over the last two weeks. This guy is special!

Finally, possibly the biggest disappointment of the week is the Tampa Bay Buccaneers. What was billed as a rematch between two heavyweights for the battle of the NFC South turned out to be one-way drumming of the Bucs. The New Orleans Saints jumped all over the Bucs from the start and never looked back. Drew Brees looked exceptionally sharp, slicing and dicing Tampa Bay’s defense for 222 yards and four touchdowns. He found 12 different receivers on the evening, distributing the ball like he was John Stockton. New Orleans’ defense impressed as well, shutting out Tom Brady and his all-star cast of skill position players from the endzone. They forced Brady to throw three interceptions and sacked him three times for good measure. With the win, the Saints swept their season series with the Bucs, taking firm control of the division.

Now that you’re all caught up, we’re going three-wide with a group of guys that’ll help put your fantasy teams and trading card portfolios over the top. Let’s jump into who’s UPNXT for week ten! 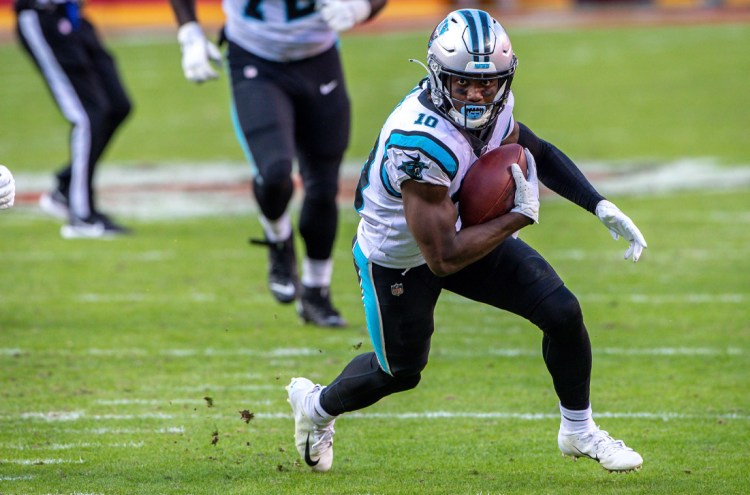 Perhaps the biggest beneficiary of Panthers’ star running back Christian McCaffrey being injured, Curtis Samuel is finally showing everyone why Carolina took him in the second round of the 2017 draft. Despite playing behind DJ Moore, Robby Anderson, and even Mike Davis, Samuel has continued to produce some big numbers over the last few weeks.

Maybe the change of coaching staff unlocked Samuel, as he has lined up not only at the receiver but at running back too. Over his last three games, Samuel has 26 touches, 225 yards from scrimmage, and four touchdowns. With reports that CMC might miss more time with another injury, Samuel should continue to be involved in the offense in the future.

Fantasy Ownership: While 36% of ownership is slightly high, Samuel is still available in most fantasy leagues. Consider him as a safe WR3/FLEX option if he remains involved in the game plan for the Panthers. Looking ahead, he gets two fantasy-friendly matchups in weeks 11 and 12. In week 11, he will get the Detroit Lions, who aren’t very good defensively this year. Week 12 gets even better, as he matches up with the Minnesota Vikings, who are allowing 31.2 fantasy points per game to wide receivers, good for second-most in the NFL. There’s only one drawback in adding Samuel: he has his bye in week 13, the last regular-season game for most fantasy leagues.

DFS: (DraftKings: $4,900, FanDuel: $5,700) vs. Bucs Yes, Samuel has had a ton of recent success, but this may be a matchup to avoid. The Buccaneers have been one of the stingiest defenses in the NFL this season, surrendering just 20.8 fantasy points per game to receivers. The implied game total currently sits at 50.5, with the Panthers as +4.5 underdogs. There’s some meat on the bone for Samuel, but we’d avoid him for cash games and stick to using him in tournaments only.

Card Market Rating: While Samuel is starting to achieve fantasy relevance, he is now in his 4th year and hasn't given any collector reason to believe that he will turn into a Pro Bowl type of receiver. He is a cool player to collect if you are a Panthers (or Ohio State) fan, as you can score some beautiful rookie patch autos for under $100, but don't expect to make any money on them. 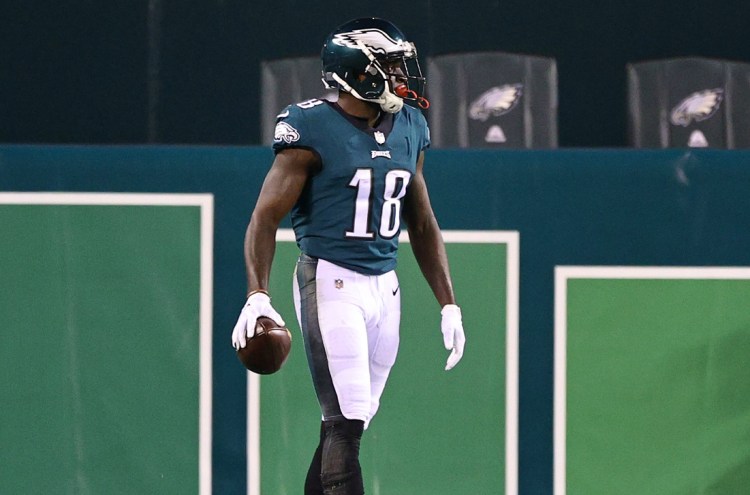 This is a case of us trying to get in early while this young receiver’s stock is still low. Jalen Reagor never really got a chance to get going before a thumb injury derailed his rookie season. He is now completely healthy and reprises his role as the Eagles’ dynamic deep threat. He’s coming off a week eight game versus Dallas that saw him turn six targets into three receptions for 16 yards and a touchdown. Reagor also saw a carry and caught a two-point conversion, not bad for a tune-up game. Couple this performance with Philly getting week nine to work out some kinks, and Reagor sets up nicely for the rest of the season.

Fantasy Ownership: At just 19%, Jalen Reagor can be had in most fantasy football leagues. We like him more for standard and half-point scoring formats, as we see him as more of a boom or bust play most weeks. He has three extremely enticing matchups coming up and making him even more of a priority addition in our eyes. He gets the Giants, Browns, and Seahawks, three of the worst teams in the league at defending the pass. Can you say Reagor bombs?

DFS: (DraftKings: $4,200 FanDuel: $5,600) @ Giants We did mention the Giants being bad against the pass, didn’t we? Fire up the Eagles’ offense in this matchup! While we can’t suggest Reagor as cash gameplay, we do think he makes for a fine pick to have if you’re trying to win a large field tournament. The implied total is 44, with the Eagles as -3 favorites. The NFC East crown race is tight, so we expect Philadelphia to come out looking much better after their goodbye. Consider Wentz, Sanders, and Reagor as a low-owned stack option this weekend.

Card Market Rating: I actually like Jalen Reagor for a few reasons. He is just coming off an injury and steps back into the mix at the right time. When you combine the meager buy-in price of his rookie cards with the fact that the Eagles play in the worst division in football and will likely be hosting a playoff game, Eagles fans will be buyers he makes some big catches during a late-season charge. With Christmas coming up, Reagor cards could be a fun stocking stuffer, so he could very well be a target for some short term flipping. If you are considering buying, the time is now! 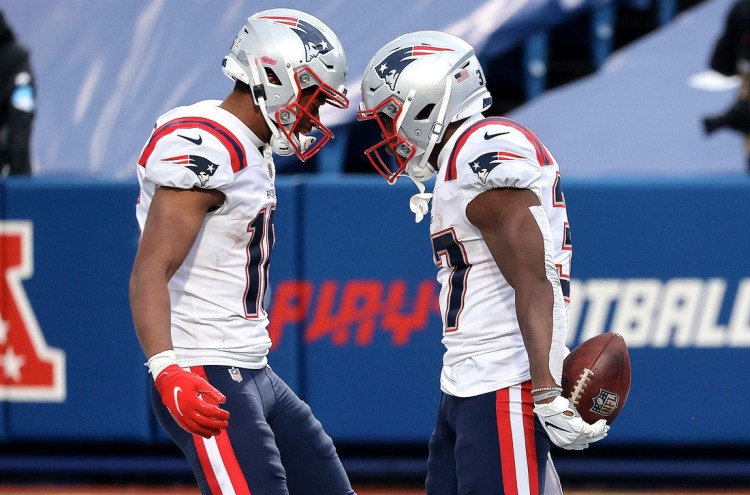 In week eight, we wrote about an undrafted rookie named JaMycal. In week ten, we’re writing about an undrafted rookie named Jakobi. The former quarterback-turned-receiver finally burst onto the scene in primetime versus the Jets on Monday night. He saw a massive 14 targets, hauling in 12 of them for 169 yards, easily leading the Patriots in receiving. We should’ve seen this coming, as the previous week he saw ten targets, converting them into six catches for 58 yards. So, if you’re keeping score at home, that’s back-to-back weeks he’s led this New England receiving corps in targets, receptions, and yards. I think we’re beginning to see a trend here, and you should add Mr. Meyers to your waiver wire list this week if you haven’t already.

Fantasy Ownership: Meyers carries the lowest ownership percentage of the three receivers we’re covering this week. At 9%, the odds are in your favor that you can get your hands on him if you need a capable wideout on your squad. After a tough matchup versus the Ravens this week, things lighten up with the Texans, Cardinals, and Chargers. Perfect timing as we close in on the fantasy playoffs.

DFS: (DraftKings: TBD, FanDuel: TBD) vs. Ravens We mentioned it before, but here we go again: we don’t suggest playing Jakobi Meyers in daily fantasy contests this week. What we mean is, you can, but we can’t really advise you do unless you’re playing a single game showdown contest. We can see him being included in a Patriots game stack, but temper expectations against a formidable Ravens’ defense.

Card Market Rating: My first 1/1 that I ever pulled out of a pack was a beautiful 2020 Panini Chronicles Gridiron Kings Jakobi Meyers, so I have been low key rooting for this guy ever since. I am torn trying to figure out if I should post it for sale on eBay right now or hold on to it and hope he continues to have games as he did on Monday night. This is the tough part of collecting cards. Was this game a mirage? Expecting him to put up 12 for 169 every week, especially when they aren't playing the 0-9 Jets, seems far fetched. However, he has been effective the last 3 weeks and could turn into something. I'm gonna rank him as a "sell," and I hope I don't regret it. 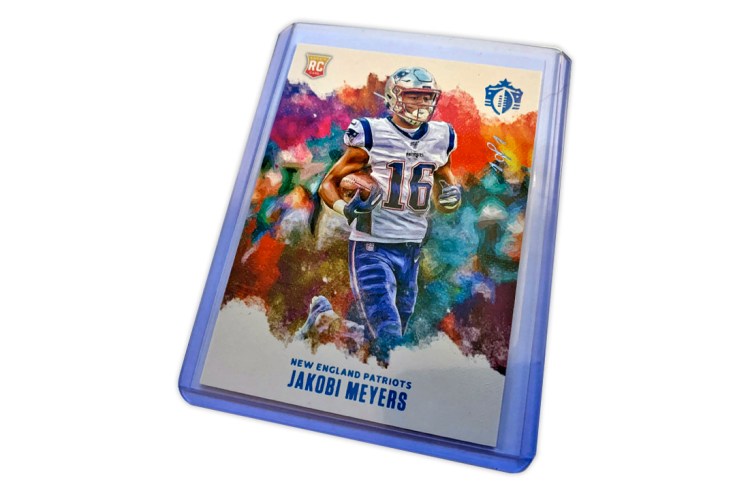 Jakobi Meyers 1/1 2020 Panini Chronicles Gridiron Kings / Jason Koeppel // ONE37pm
Slide 1 of 3
Did you like this article?