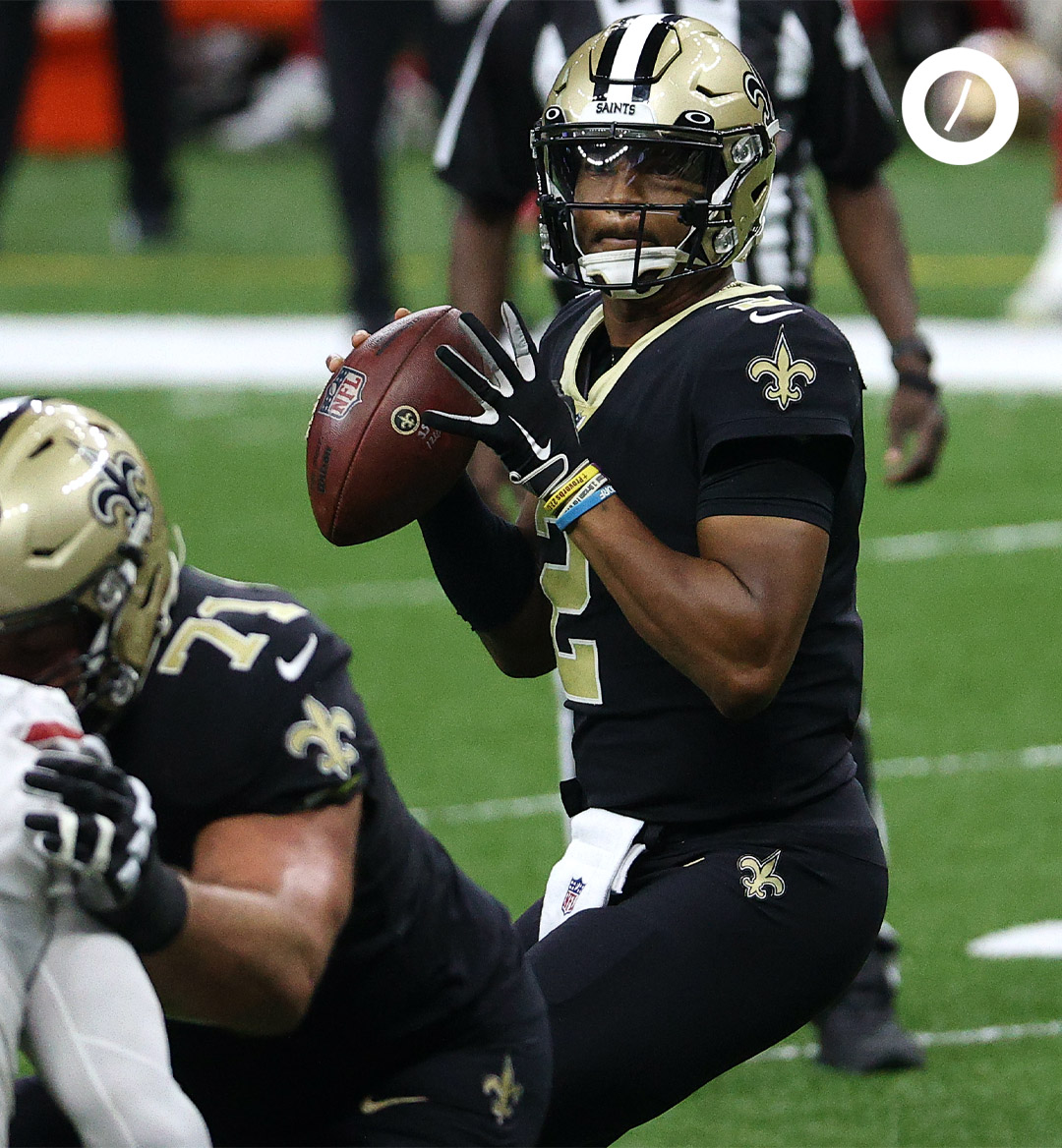 As I watched Arizona Cardinals’ quarterback Kyler Murray scramble to his left and let a pass rip towards the end zone, I was reminded of one of the most famous Hail Mary passes in college football history. The pass I’m referring to, is the game-winning 1984 Boston College miracle, by another pint-sized passer named Doug Flutie. These signal callers actually have some things in common: both passers stand 5’10 and were deemed too small to play quarterback, but both won the coveted Heisman Trophy for their respective colleges, and both overcame their literal shortcomings by winning big games with buzzer-beating bombs. That pass from Murray would be snagged out of the air by his all-world receiver DeAndre Hopkins, clinching the game for the Cards. So, let this be a lesson to anyone reading that has ever been doubted: block out the noise. Whatever your grind or hustle is, keep at it, you’ve got this!

Speaking of overcoming the odds, how cool was it to see Alex Smith making his first start since the devastating leg injury he suffered back in 2018? Not only was the injury considered by most to be career-ending, but in fact, it was also life-threatening due to an infection in his blood. After doctors worked to save his life, Smith began the long road to recovery. It’s enough of a miracle that he was able to keep his life, his leg, and regain the ability to walk again. But to return to the game of football as a starting quarterback? Incredible. Smith didn’t just start, but for the first time in his career, he passed for 300 or more yards in back-to-back games. Another example of staying faithful to the grind and reaping the rewards. Congratulations to Alex Smith, a true inspiration to all.

Now, let’s see if we can help you overcome some obstacles this week. We’ve got three new names on deck that are sure to help your fantasy football teams, and maybe even your card collections. Let’s get into who’s UPNXT for Week 11! 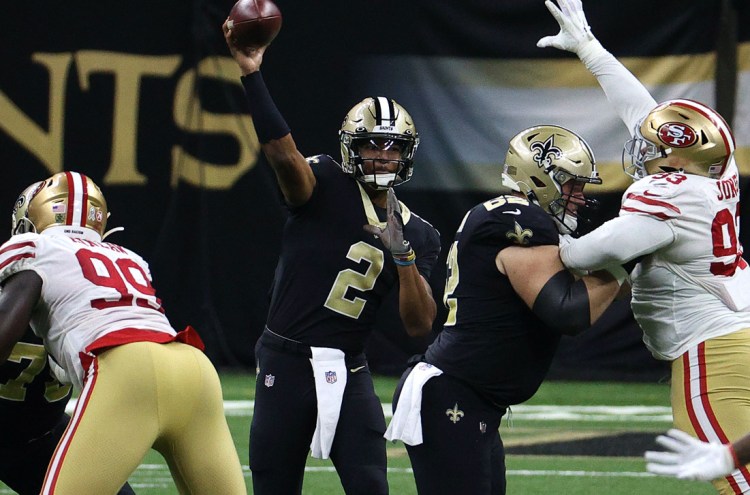 After future Hall of Famer Drew Brees exited Sunday’s game with a rib injury, former Tampa Bay Buccaneer Jameis Winston was called into action. Winston, who has a knack for putting up major passing yards and touchdowns, while also turning the ball over at a breakneck clip, is set to take over for the next couple of weeks. “Famous Jameis” left Tampa Bay and has had the benefit of studying under Brees, and head coach Sean Payton this season, as he looks to start a new chapter in his football career. Hopefully, with a full week of practice with the first-stringers, he will look a little sharper than he did in the second half versus the 49ers.

Fantasy Ownership: If you were relying on the likes of Drew Brees or Teddy Bridgewater, or if your quarterback is on bye this week, Jameis Winston could make for an intriguing addition to your fantasy roster. He’s currently held in just 2% of leagues, so it’s safe to say he’s there for the picking. Winston’s upcoming schedule includes matchups against some of the softest defenses versus the pass this year. He gets the Falcons this week, then the Broncos, before a rematch versus Atlanta in week 13, the final week of the regular season in most fantasy leagues.

DFS: (DraftKings: $5,900, FanDuel: $7,200) vs. Falcons This is a prime opportunity for daily fantasy players to jump on the Jameis Winston train before his price goes up. He gets a divisional matchup, at home, versus a defense that is allowing the most fantasy points to quarterbacks in the NFL. This game has a healthy implied total of 50.5, so there’s plenty of meat on the bone for Winston to rack up points. I like his price on DK more than FD, as you get a $1,300 discount. This isn’t the safest play by any means, but we know that Winston’s ceiling is sky-high if the coaching staff allows him to uncork enough passes. He’s a fringe cash play, and a definite tournament option this week.

Card Market Rating: Part of me wants to call him a buy. Heisman Trophy winner. National Champion. First, pick in the 2015 draft. Third rookie ever to throw for over 4000 yards. Led the league in passing yards LAST YEAR, and yet the Bucs chose not to resign him, and he had little-to-no interest in the league as a starter, so he wound up taking a backup roll in New Orleans. Now he leads a high powered offense that is just getting Michael Thomas back and has Alvin Kamara running all over the league. It seems like a perfect storm for a guy you can buy low on, and flip if he has a few games.

Most of my hesitation with Winston comes from the fact that he is so absurdly unlikeable, and that will greatly affect his market. When I think of Jameis, the first 4 thoughts that pop into my head are sexual assault allegations, crab legs, the Uber groping incident, and "eating a W". I'm not saying that there won't be Saints fans (and Florida State fans) buying his cards if he plays well down the stretch, but the mass appeal won't be there. If you want to pick up some cards and see where it goes, I certainly don't hate it. However, I'm not going to advise you to do that. 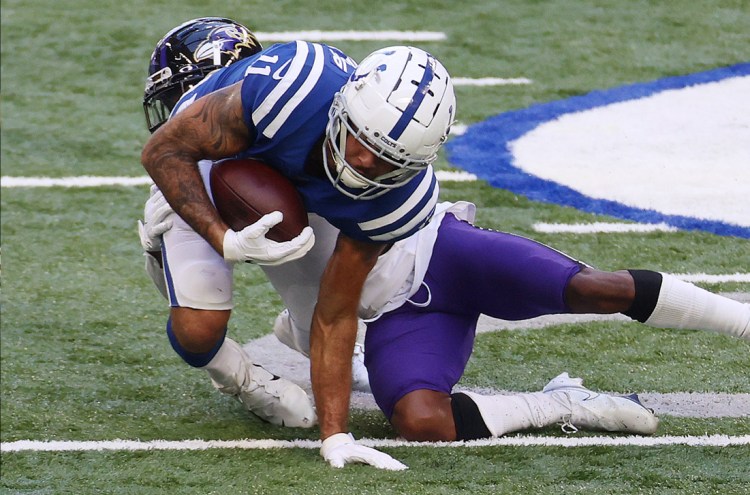 The son of former NFL running back Michael Pittman, “Junior” is finally starting to make a name for himself at the professional level. After a highly productive career for the USC Trojans, MPJ’s season started off slowly before missing weeks 4-6 with an injury. Over the last two weeks, however, quarterback Philip Rivers has targeted Pittman Jr. a total of 15 times, turning those looks into 11 receptions for 157 yards. Rivers may not have the arm strength to push the ball downfield anymore, but Pittman Jr. has plenty of YAC (yards after catch) upside to take a short pass to the house.

Fantasy Ownership: The fantasy football industry is still sleeping on Michael Pittman Jr., as he’s only rostered on just 8% of teams right now. Maybe these depressed ownership numbers are due to a lack of faith in “Old Man Rivers”, and they could be right, but even so, MPJ is worth making room for on your bench. Weeks 12 and 13 stand out especially, as the Colts get juicy matchups versus the Titans and Texans. Pittman Jr. tortured Tennessee to the tune of 101 yards, which is music to our ears!

DFS: (DraftKings: $4,500 FanDuel: $5,500) vs. Packers Pittman and the Colts host the Green Bay Packers in a tough week 12 home game. The implied total of this matchup is 51, with Indianapolis as -3 favorites. Green Bay has been one of the stingier defenses against wide receivers this season, allowing an average of 21.5 points per game. If top cover man Jaire Alexander is out again, this could be an easier matchup in real life than on paper. Consider a game stack of Rodgers, Adams, Jones, and Pittman Jr. to be contrarian in tournaments this weekend.

Card Market Rating: I liked Pittman coming out of USC and thought he would turn into a good pro receiver, but I'm gonna pass on his cards. This wide receiver draft class is loaded. If you want to invest in one of them, why not Justin Jefferson? Jerry Jeudy? Ceedee Lamb? Chase Claypool? Even my guy Denzel Mims (sorry Curtis, since you won't put him in an article, I had to figure out a way to sneak him in!) 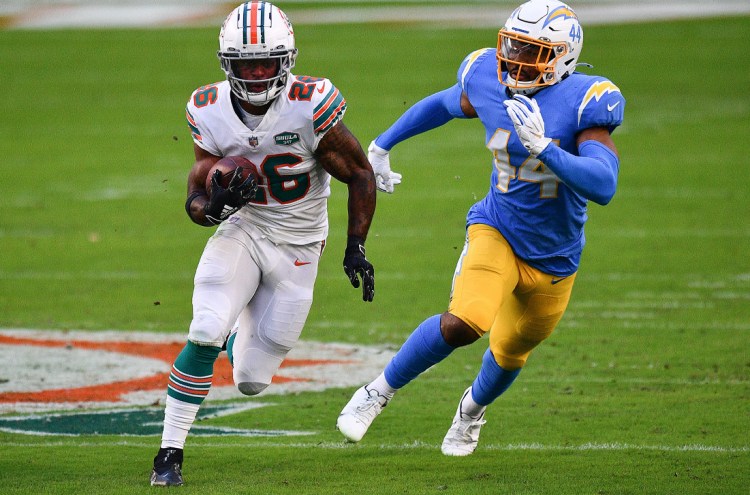 It seems like only yesterday that we were writing to you about Dolphins’ running back Myles Gaskin. Well, fast forward a few weeks, and Miami now finds themselves without Gaskin, Matt Breida, and they just released veteran Jordan Howard as well. As has been the case all season, the injury monster creates another opportunity for the next man up. The next man for the Dolphins happens to be Salvon Ahmed, who is just the latest former undrafted free agent to make our article.

Ahmed had been on the Phins’ practice squad for most of the season, making his NFL debut in Week 9. He led all Miami running backs last week with 21 carries, 85 yards, and a touchdown. If his fellow backs continue to be sidelined with injuries, then Ahmed should play a big role for the Dolphins.

Fantasy Ownership: It’s no surprise that people have been snoozing on Salvon. Heck, I didn’t even know who the guy was until recently. With that being said, he’s available in 93% of fantasy football leagues, so getting your hands on him should be easy. His upcoming schedule includes fantasy-friendly matchups versus the Broncos, Jets, Bengals, and Chiefs. You can never have too many running backs, especially entering the fantasy playoffs, so go out and get you some Ahmed before he’s gone.

DFS: (DraftKings: $4,800, FanDuel: $5,600) @ Broncos Denver ranks near the middle of the pack in terms of fantasy points allowed to running backs at 18.8. This game has an implied total of 45, with Miami as -3.5 road favorites. If Tua and the Dolphins can keep their hot streak going, they may lean on Ahmed to chew up some clock late in the game. Keep an eye on the injury status of Miami’s other running backs, as they could cut into Ahmed’s production if they are healthy enough to play. I’m only considering Ahmed as a tournament pick for now.

Card Market Rating: In the words of American Idol's Randy Jackson, "It's a no from me, dawg".