As the season starts, we look back 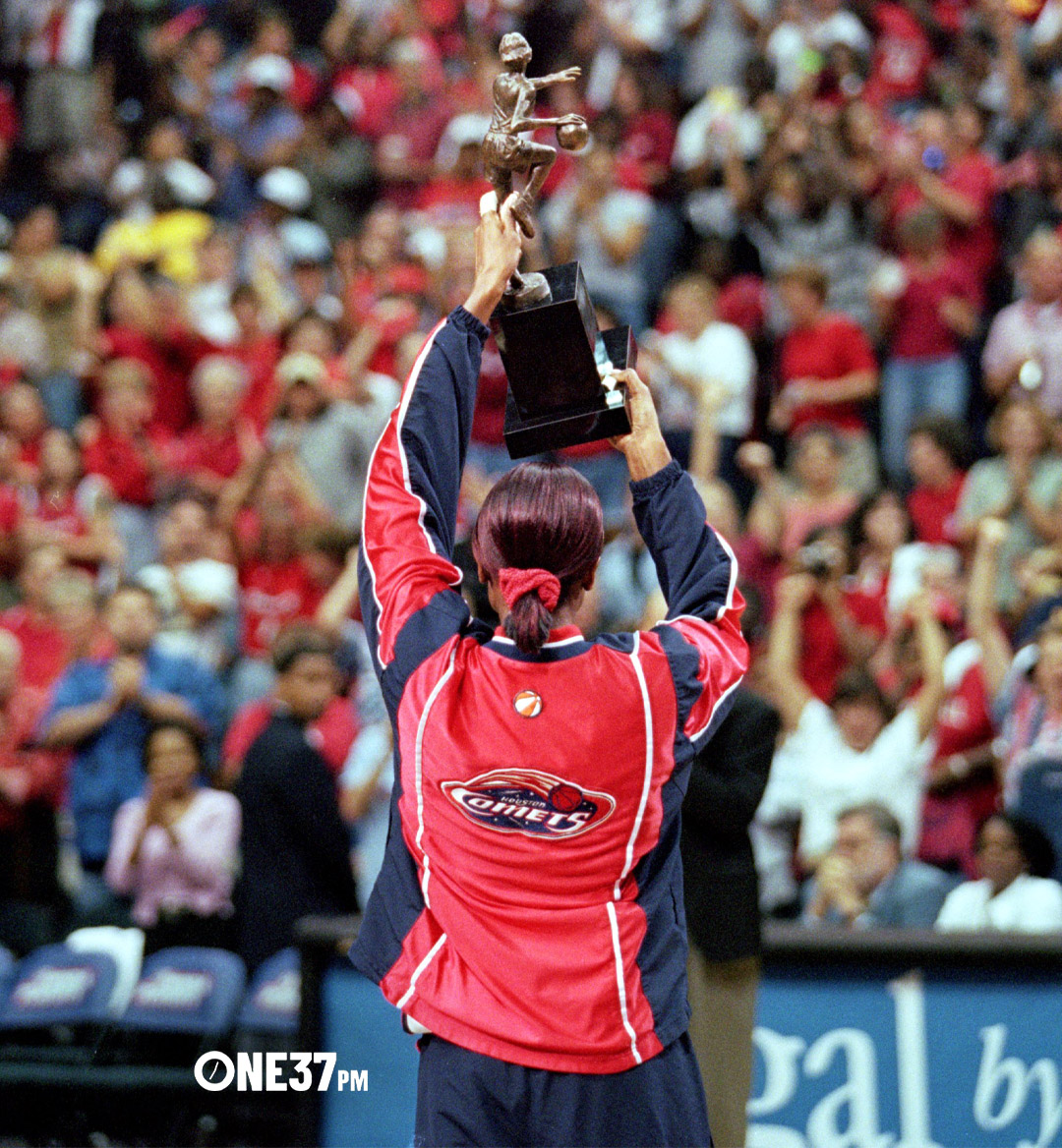 Folks we are just mere days away from the start of the WNBA season. Now, this isn’t just any season—it’s the 25th, and as we continue to move forward, we are taking a look back at every single WNBA MVP in its 25-year run.

What Defines The WNBA MVP Criteria?

The WNBA MVP is decided by a panel of sports broadcasters and writers, and is an award given to the athlete deemed as the most ‘valuable’ or ‘high-performing.’ As of 2008, fans also get a say in the matter with their selections counting for 25 percent of the total votes. To date, the WNBA has had 24 players receive that prestigious honor, and today we are going to reflect on those individuals, and the seasons that garnered them those awards. So without further ado, let’s get right into it.

Cynthia Cooper was a dream for the Houston Comets and a nightmare for all of the other teams. The future Hall of Famer led the league in scoring, ultimately guiding the Comets to their first championship in 1998 (where she was also named Finals MVP).

The following season, Cooper managed to return even stronger, leading the league in scoring once more with an average of 22.7 points per game. The Comets went on to win the second of four consecutive championships, and Cooper repeated as Finals MVP.

Yolanda Griffith. Sacramento Monarchs legend. WNBA Champion. 1999 WNBA MVP. Griffith averaged 18.8 points per game during her 99 campaign, establishing herself as one of the league’s premier stars. In addition to her MVP award, Griffith also won Defensive Player of The Year, proving that she was a force to be reckoned with on both offense and defense.

Air Swoopes won her first of three MVP awards during the 2000 season in a year that saw her winning not just the MVP but the league scoring title and Defensive Player of the Year awards as well. Swoopes averaged just over 20 points during the 2000 campaign, stealing the scoring title from teammate Cynthia Cooper, and got the opportunity to experience the joy of winning her first championship just a couple of weeks later.

Lisa Leslie also won the first of three MVPs following a regular season where she netted 19.5 points per game in a year that saw her capturing her first championship and Finals MVP. Leslie enjoyed tons of success during the 2001 season, also becoming the WNBA’s all-time leading scorer.

Air Swoopes came back roaring after missing the entire 2001 season due to a torn ACL, securing her second MVP award during a year where she averaged 18.5 ppg. Similar to her first MVP campaign, Swoopes also won the 2002 Defensive Player of The Year award and made the All-WNBA first team.

Lauren Jackson entered the chat in 2003, winning one of the league’s highest honors following a breakout season in which she led the league in scoring, and became the Storm’s franchise player. Similar to her counterparts, this MVP would be the first of three.

The second of Leslie’s three MVPs came in 2004, during an Olympic year in which she not only captured a gold medal with Team USA but also led the Sparks to a league-best record averaging 22 ppg. Leslie also made the All-WNBA first team and won Defensive Player of The Year for the first time in her career. Needless to say, 2004 was a great year Leslie.

Sheryl Swoopes won her last MVP in 2005, making her the first player to win three MVP awards. Once again, she led the league in scoring, and her defense was on point, as usual, making the All-Defensive First Team. Swoopes went on to enjoy two more seasons with the Comets before signing with the Seattle Storm in 2008. After a three-year break, Swoopes returned to the W for her final season, playing one year with the Tulsa Shock before retiring. Swoopes' 2011 retirement closed out one of the greatest careers in professional sports.

Lisa Leslie also won her final MVP in 2006, making her the second player in WNBA history to win three MVP awards. Leslie led the Sparks to the best record in the league and continued to add to other personal accomplishments such as being the first player to surpass the 5,000 point mark. Leslie continued to play with the Sparks for three more seasons before retiring in 2009, again closing out one of the most storied careers in professional sports.

Lauren added to her MVP resume during the 07 season where she led the league in both scoring and rebounding with historic performances. This win would be the second of three eventual MVPs.

Candace Parker entered the league with a bang, not only winning Rookie of The Year but league MVP as well. If you didn’t know about Parker before, you definitely knew after this season as the rookie made it abundantly clear that she was here to stay.

DT was the winner of the 2009 honor after a year that saw her leading the WNBA in scoring (she is now the all-time leading scorer), while also reaching the 4,000 point mark. The Phoenix Mercury wound up reaching the Finals that season, where they defeated the Indiana Fever 2-1. Taurasi was named Finals MVP after an incredible performance, proving why she is the GOAT.

Lauren Jackson won her final MVP during the 09 season, helping the Storm achieve the best record in the W. Jackson won multiple Player of the Month awards for her offensive and defensive contributions (Jackson was top ten in multiple categories including points and rebounds), and the Storm reached the Finals where they defeated the Atlanta Dream 3-0, with Jackson winning the coveted Finals MVP. Jackson went on to retire from professional basketball in 2016 and was inducted into the hall of fame in 2020.

It’s hard to believe that Tamika Catchings didn’t win an MVP until 2011. Beating out Tina Charles, Sylvia Fowles, and Sue Bird amongst others, Catchings captured the award after a season that saw her shooting among the best percentages of her career. The 2011 season was a precursor to the following year when Catchings put on a show during the 2012 Finals to lead the Fever to their first championship.

2012 saw Tina Charles winning her first MVP after a year where she made All-WNBA first team, and a milestone season in which she set many records including the fastest player to reach 1,100 rebounds, and the quickest to reach 1000 boards.

Parker returned to the MVP forefront after helping the Sparks achieve the second-best record in the league that season, joining a rare group of players to win multiple MVP awards. The 2013 race was a close battle between Parker and Maya Moore, but Parker emerged victorious.

After a close battle with Candace Parker the previous year, Maya Moore garnered her well-deserved MVP award after a near-perfect season in which we pretty much led the league in, well, everything. To say Moore was dominant is quite an understatement, as the Lynx legend recorded one of the best statistical seasons in WNBA history.

Elena Delle Donne followed Moore by winning the 2015 MVP after securing the scoring title and guiding the Chicago Sky to the No 2. Seed in the Eastern Conference. Delle Donne was a menace offensively with her multiple 40 point efforts while also taking care of the defensive side, finishing third in both rebounding and blocked shots. After sitting out last season due to Covid concerns, Delle Donne is expected to return this season after she recovers from a recent back procedure and is also expected to be part of the U.S. Olympic squad.

Was it really a surprise to see Ogwumike hoisting the MVP trophy in 2016? The 16’ MVP honor was the first of her career coming off a season where she averaged 19.7 points, 9.1 rebounds, 1.2 blocks, and 3.1 assists. The Sparks later went on to win the championship, giving Ogwumike her first.

Sylvia Fowles finally got her turn to experience the magic of the MVP award after an equally magical season where the center turned in an extremely dominant year, leading Minnesota to a 27-7 record. Fowles beat out Tina Charles and Candace Parker for the number one spot, earning the majority of the first-place votes. Well deserved.

We anticipate that Stewie will have more MVPs on the way, but her first came in 2018 during an All-Star year where she shot lights out from the field (21.8 ppg), and three-point range. The former Rookie of The Year also shot an astounding 82 percent from the free-throw line and capped off her amazing season by winning Finals MVP not too long after when the Seattle Storm defeated the Washington Mystics 3-0.

Delle Donne reclaimed her MVP throne in 2019 earning the honor for a second time. The decision was an almost unanimous one, making Delle Donne the first player to win an MVP with two different teams after being traded to the Mystics just before the start of free agency. A few weeks later, Delle Donne would go on to win her first championship with the team after they defeated the Connecticut Sun 3-2.

A’ja Wilson could very well have a case for winning the most profound MVP in the history of the W. It wasn’t just about her stellar performances—the 2020 season as a whole will probably go down as being one of the most unique ever in sports. You had a bubble situation due to the Covid pandemic, and on top of that, the W was leading the charge in bringing awareness to racism, police brutality, civil unrest, and various other injustices following the killings of George Floyd and Breonna Taylor.

These were not easy circumstances to perform in, and yet Wilson did it beautifully, averaging 20 points, 8.5 rebounds, 2.0 assists, and 2.0 blocked shots. The 24-year-old still has plenty more accomplishments on the way, but this is undoubtedly special.

So who is next? Well, we’ll have to wait and see. In the meantime grab your league passes and get ready to enjoy the season!

Is This the Year the Georgia Bulldogs Finally Break Through?

Why Aleksej Pokusevski Should Be Your New Favorite NBA Player