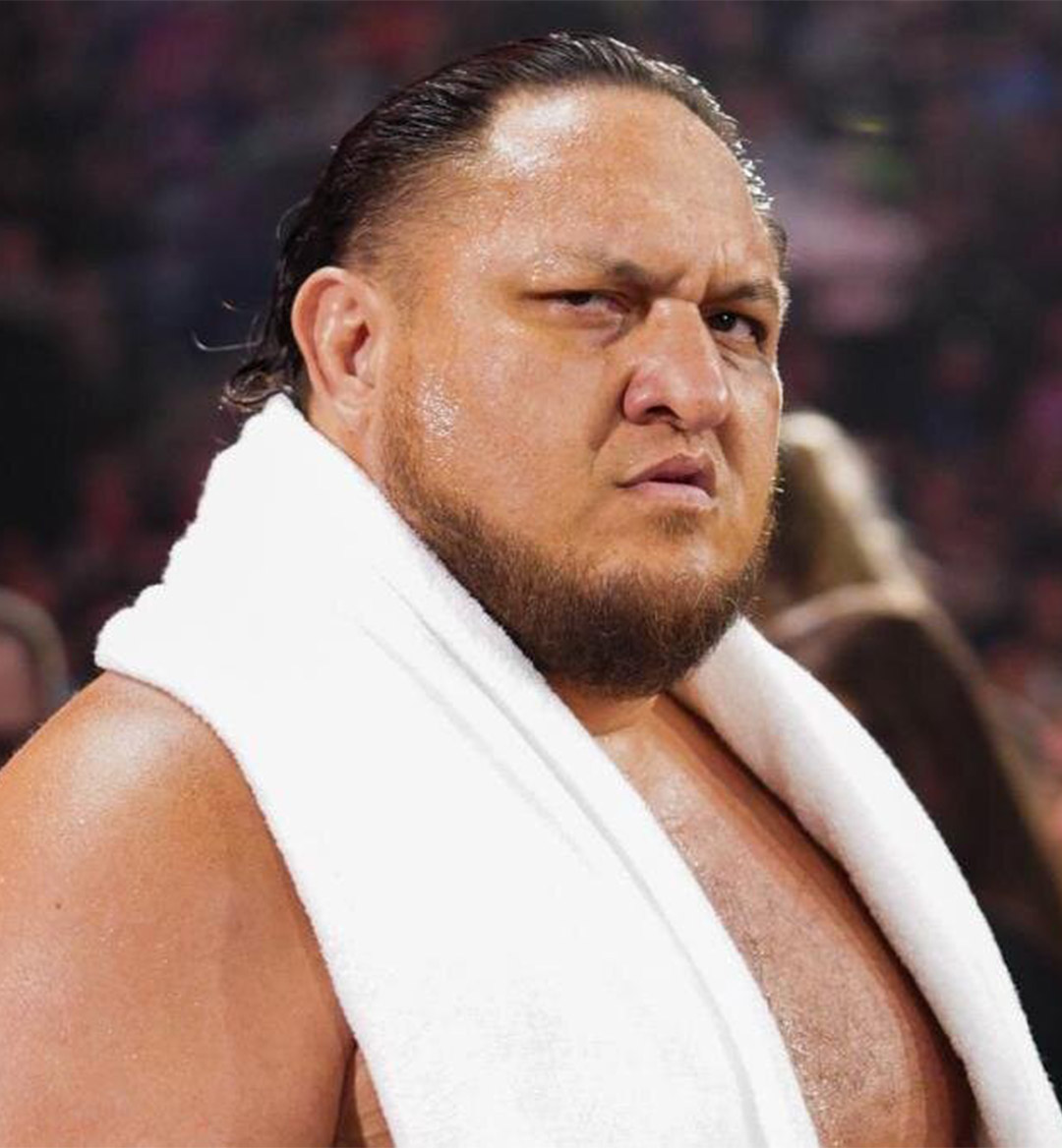 WWE announced its latest batch of talent cuts and a few of the names scattered among that list had everyone’s jaws on the floor. Fans came out in droves on the World Wide Web to make their opinions known regarding WWE’s recently released superstars - most of those same fans spoke on the untapped potential of some of those men & women and presented dream scenarios about where they’d like to see them go next. The Lucha Libre maestro known as Andrade got his freedom from Vince McMahon and company earlier this year, which has led to him charting a new path for himself that coincides with other pro wrestling companies.

Here’s hoping that the wrestlers on this list have big things planned for the day their 90-day no-compete clause expires. Speaking of big things, which wrestling feds should they compete for next?

The recently released name that elicited the most disappointing sighs and shocked gasps was Samoa Joe. Most folks figured he’d be in WWE’s good graces for the rest of his career - he showed that he could be a major asset for the company inside and outside the ring. But due to a series of unfortunate events, Joe was put on the injured reserve list more often than not. Now that he’s no longer under the WWE banner, a bunch of fantasy matchups for the “Samoan Submission Machine” have opened up and gotten fans excited about what’s to come. Joe’s best years may be behind him, but he still has it in to deliver a banger of a match against equally talented opponents. Joe should ply his trade in both AEW and NJPW once it’s safe to make the trip to Japan. Watching Joe compete with the likes of Kenny Omega, Will Hobbs, Will Ospreay, Jeff Cobb, Tomohiro Ishii, etc. sounds like an amazing proposition that we hope comes to fruition.

WWE’s boneheaded decision to break up The IIconics and proceed to do next to nothing with them soon after still confounds us to this day. But we really shouldn’t be surprised by that move since WWE has a penchant for breaking up entertaining duos or stables for no good reason. Billie Kay and Peyton Royce are an incredibly charismatic combination that definitely needs to re-align with each other during their post-WWE career. Seeing as how IMPACT Wrestling has a stacked women’s division and Knockouts Tag Team Championships, it makes all the sense in the world for Billie and Peyton to make a strong play for themselves by heading there. Both women have a lot to offer as characters and have the potential to improve while competing against IMPACT’s talented ladies. The IIconics comeback needs to be a thing in IMPACT, for sure.

An unfortunate injury sadly tripped up Chelsea Green’s main roster debut on SmackDown back in November of last year. And sadly, this wasn’t the first instance of a broken wrist preventing her from going a bit farther in the company. Chelsea got the chance to enter the WWE ranks in the first place thanks to her long stint in IMPACT Wrestling. Since she’s already done a ton of work in that fed as Laurel Van Ness, we think it’s time for her to step up to AEW and bolster their women’s division even more. Chelsea’s a solid in-ring competitor and certainly has plenty of room to improve. Tay Conti has improved by leaps and bounds due to her stint in AEW, so imagine how much better Chelsea could get just by moving over to Tony Khan’s rising company.

We figured WWE would give longtime vet Mickie James a bit more to work with after her impressive performance against Asuka at NXT TakeOver: Toronto in 2016. That just wasn’t the case, however - Mickie simply existed as a non-factor on the main roster and did next to nothing during her tenure there. Mickie still has a lot to offer in the ring, which is why we think she’d make for a great addition to the renewed version of the National Wrestling Alliance. Her veteran status already makes her the type of wrestler that can always be relied on to deliver a good to great match. With women like Sarena Deeb, Taryn Tarell, and Thunder Rosa in tow, the NWA has a strong division that could be further bolstered by Mickie’s welcome presence.

The Lucha Libre artist formerly known as Samuray Del Sol had a surprisingly decent run in WWE. As Kalisto, he got his hands on the NXT Tag Team Championship, WWE Cruiserweight Championship, and United States Championship (twice, we might add). His association with the Lucha House Party didn’t really amount to anything, though. And once he split up for the group and became a singles star on SmackDown, most fans feared the worst for him. And sadly, their fears were well-founded. Kalisto should kick start his career once again by plying his trade in MLW and becoming the next pillar of the company’s Middleweight Division. MLW treats its Mexican Lucha Libre fighters well, plus it houses a good number of talents that would work well with someone of Kalisto’s smaller stature. Kalisto has the tools to produce in-ring magic with the likes of Lio Rush, ACH, Myron Reed, Septimo Dragon, etc.

You gotta feel for Brother Tucker - the man got pushed to the wayside after turning on his former Heavy Machinery brethren Otis and quickly became an afterthought once he got called over to Raw. Tucker shouldn’t have been split from Otis in the first place - both men stood out as one of SmackDown’s top tandems and gave the Blue Brand’s weak tag team division the extra boost it needed back then. Tucker’s a surprisingly agile big guy that offers a lot in the ring, so it’d make a ton of sense for him to showcase his slept-on talent in the NWA. A former WWE talent like Trevor Murdoch has gotten to show his max potential thanks to a stint in the NWA. We’d love to see that same opportunity get presented to Tucker so he can expose everyone to just how good he truly is.

WWE really messed up by not going all the way with Bo Dallas’s “BO-LIEVE” gimmick. It thrived during his run in NX, but it truly didn't get the attention it deserved from the powers that be once Bo got called up to the main roster. He had a halfway decent run with Curtis Axel once they became The B-Team. But that duo eventually disappeared off the face of the Earth, which led to Bo asking for time off in 2019. Bo has always been the type of wrestler that gives off old-school vibes, which makes him the perfect candidate for an NWA run. As a third-generation wrestler, Bo already has a built-in storyline for himself that would make him stand out as an integral part of NWA’s retro presentation.

Once Mojo Rawley’s football buddy Rob Gronkowski moved one from his WWE gig to head back to the NFL, we all realized that WWE’s resident hype man was going to go nowhere fast. Before he got to run around with “Gronk,” Mojo was relegated to nothing more than a lowly jobber that constantly chased whoever was holding the 24/7 Championship. Mojo’s whole “I’m off my rocker cause I talk in the mirror to myself” gimmick was interesting, but WWE didn’t really do a whole lot to follow up on it. Mojo’s a pretty likable guy that could tap back into his brightly colored moniker and become a bit more worthwhile this time around. We think he’d make for a fun addition to the IMPACT Wrestling roster as he could link back up with Zack Ryder and get into with the likes of Jake Something, Joe Doering, and Hernandez. We wouldn’t mind seeing the return of the hype!

Wesley Blake has strictly been a tag team guy during his WWE tenure. His NXT run alongside Buddy Murphy was a lot better than it had any right to be, but his Forgotten Sons refresh didn’t really inspire a lot of fans to latch on to his new persona. Wesley’s one of those guys that may not have the strongest personality traits to become enraptured in, but he still manages to perform well whenever the bell rings. It’s time for him to ply his trade in the NWA and showcase his skills as a singles star for the world to see. He has the tools needed to work with a lot of the roster members that fill the NWA and could become a go-to guy when it comes to World Television Championship opportunities.