From his brand Cope to his history of multimedia art, look out for Alex Headlam 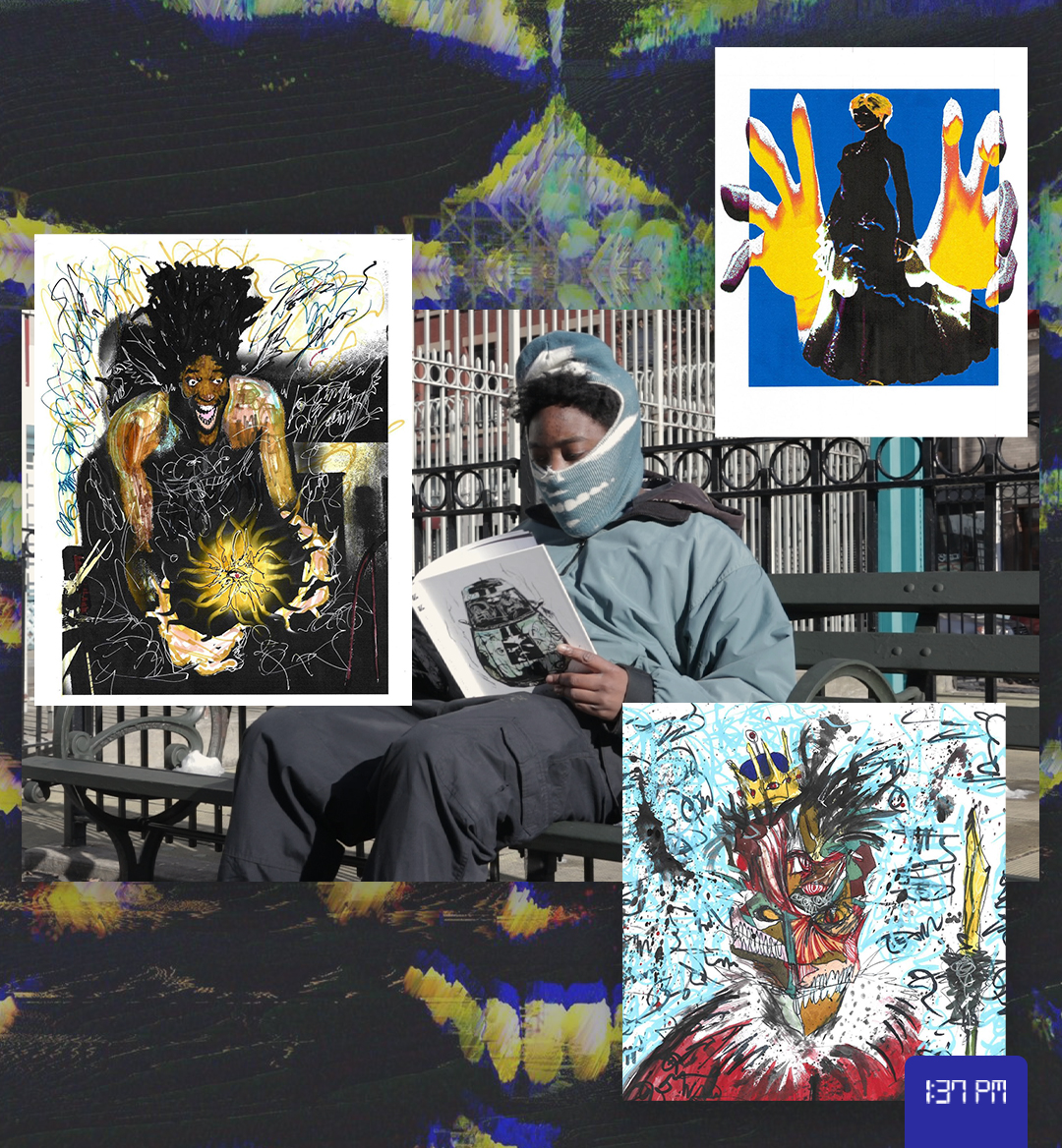 All artwork by Aleqth, graphic by ONE37pm

“I’m world building here,” Alex Headlam smiles to me, his breath puffing out in a thick cloud as we sit across from each other at a park picnic table on one of the coldest days of the NYC winter thus far. Headlam’s artist moniker is Aleqth (“Alex, but with a lisp”) and he’s an interdisciplinary artist who masterfully evades any prescriptive notion of what kind of artist he is. Thus, world builder is the most accurate title.

I connected with Alex through a mutual friend—and exceptionally talented artist—Vinnie Hager. I reached out to the America-born / Jamaica-raised artist to speak about his clothing design work under his brand name “Cope.” But his clothing design is the tip of the iceberg. Between the book he just released, the artwork he’s minted over the last year and the music he regularly produces, speaking with Alex is a clinic in what it is to be a contemporary creative.

“I started making art, probably when I was 3 years old,” Alex tells me, but hesitates for a moment before adding: “Maybe when I was born. My mom said I was a very crazy character the first few months of my life, doing weird things, almost speaking to her. That’s a form of art, I’d say.” In his early years in Jamaica, Alex’s first medium was play-doh; he would concoct cars and other sculptures, eventually turning to paper and creating renditions of automobiles and vampires on the page.

He moved to Columbia, Maryland around the age of twelve, where he lived with his grandmother until the rest of his family moved up as well. He identifies the age of 15 as the time when he started taking his art more seriously. “It wasn’t until I was 15—I’m 22 right now—that I started taking sharing my art on the internet more seriously. And with that, the art gets innately more serious,” Alex tells me. Much of his experience in the art, fashion and NFT world can be chalked up to community and the network he’s fostered on social media in the past seven or so years.

The brand name and style that Headlam is known for now was born in 2020, a little bit before he dropped out of college. “I was in a position where I didn’t feel creatively liberated,” he tells me before diving into the moment he came up with the Cope moniker.

“I had this vision for a sculpture made out of a metal material that resembles a red Ferrari, kind of star circulating around me. And I tried to cut it out and put it on paper as a direct way to see it. But when I did that, it looked like a logo. So I scanned it and photoshopped it. And I’m like, this is something really special here. I look to the corner of my screen and I see the word ‘Cope’.” This moment would not just lead to the name itself, but a commitment to a dichotomous digital and physical production method that Headlam used for all 200 pieces of his recent book. More on that later.

“There’s an energy that I resonated with and I had to incorporate it [Cope]. I started making clothes under the name. And as time went on, I realized this is kind of a lifestyle that I’ve been living for I don’t even know how long,” Alex goes on. “To me, ‘Cope’ means to make the best out of any situation that you’re in and reinventing the perspective in which you see the world. Taking all the baggage and the negative, kind of making it a plus one instead of a negative.”

It doesn’t have to be a crazy sum going up, just one step closer to just being better is what Cope’s all about.

The Cope ethos has become a driving mentality for Alex’s entire worldview. “Everything that we consider bad maybe can be turned into something that works for us, instead of against us,” he remarks, adding: “And also, the sense of community, establishing that Cope also means to help others in some way and to combat negative forces.”

Despite his fleshed out conception of the name, he leaves it open ended: “It’s ever-evolving. I’m still learning what it means as I go on.”

New Year’s Night of 2020, he began creating clothes under the newly christened name, screen printing ferociously in his parent’s basement. Soon after, he moved out of his parent’s place in Columbia to Baltimore City, before ultimately moving to Miami in 2021, where he currently resides. 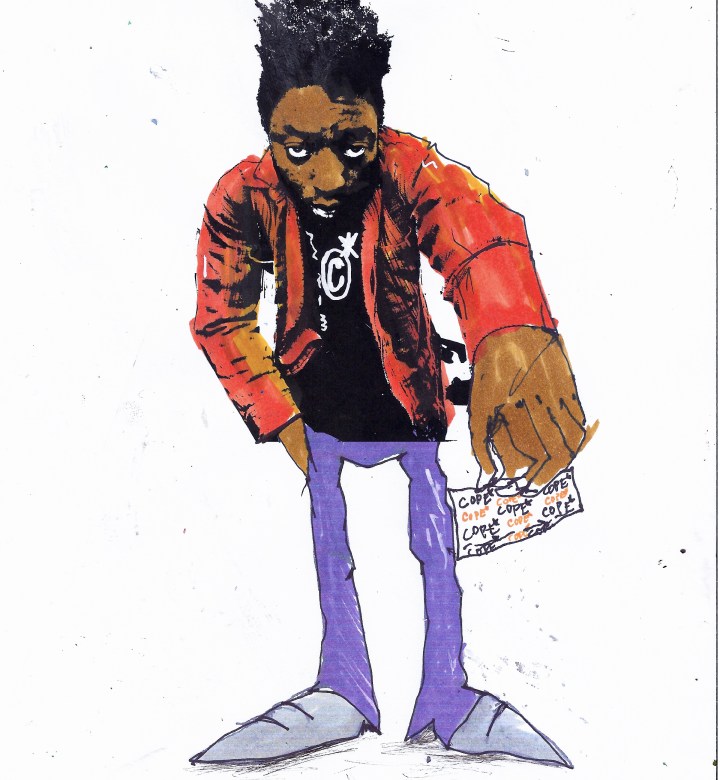 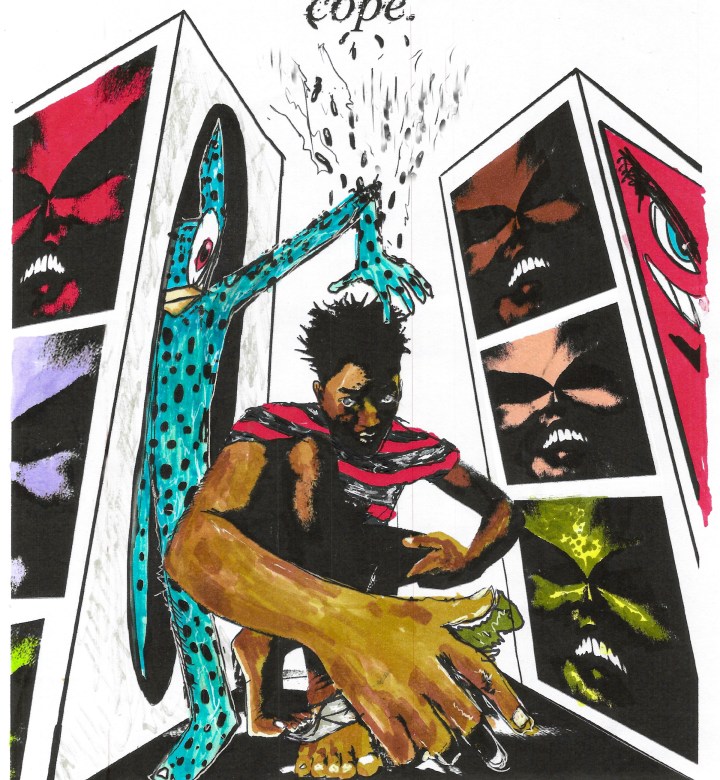 Alex’s book, which he and I thumb through during our conversation, looks like it could be the culmination of a decade of work. To my surprise, he tells me that he completed the 200 pieces in roughly the same amount of days. Plus, the art style he’s using was developed specifically for the book.

“The technique is inspired by Andy Warhol. He would take photos of people and he would change the color balance to strictly black and white and then color them in himself. And that’s kind of what I’m doing, like a coloring book approach. But instead of using paints and crazy inks, I’m kinda just using marker and it’s more in line with my natural process of just working like this,” he gestures scribbling on the table. Building off of Warhol’s practice, Alex photographs himself, photoshops the images to distort them and take out the color, and then prints them. “It’s a multimedia process,” he says. Once printed, he uses primarily markers to color them in before rescanning them. 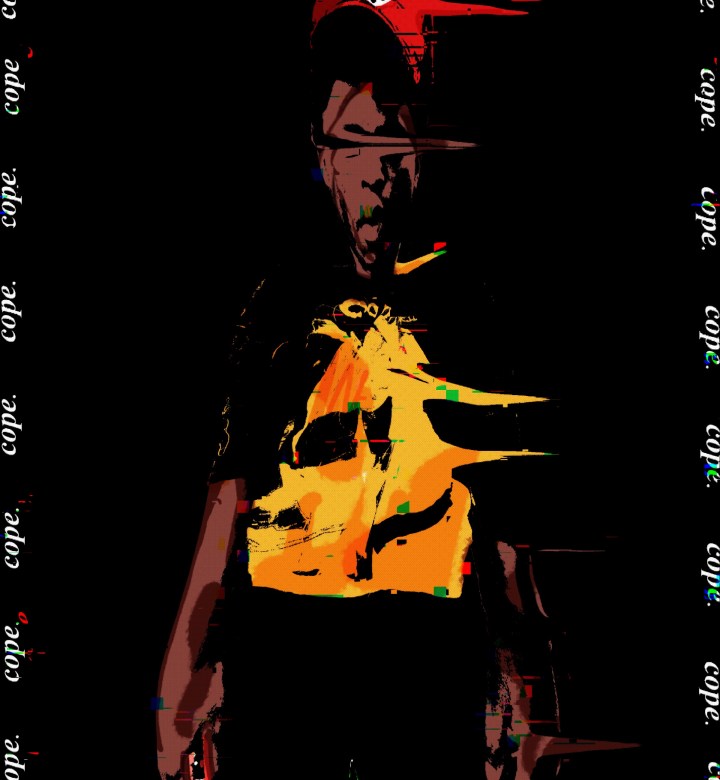 Like with his first foray into sharing his work on social media at 15, his process of distributing his work to his community helped foster his commitment to the new style. “It’s very refreshing. You work a certain way, and then you find an evolution in that. I found that I was sharing it live—the pages as I was making them—and people were gassing me up like, “Yo this is crazy.” So how can I take this to the next level?” he posits. Upon wrapping up his introduction of the style to me, he quotes Pablo Picasso:

Picasso numbers among his many artistic inspirations. “He kind of made me feel more free in the way that I can draw,“ he tells me, before adding: “It might not look like a leg, by definition, but it’s gonna be a leg.” But above all, he cites Dr. Seuss as one of his most formative inspirations: “That was just my introduction to surrealism and blending ideas in a really unique way.”

Every piece from the book is available as an NFT on OpenSea right now.

We also spend some time discussing his eye-catching logo. “The face kind of represents laughing,” he tells me, but it’s more complex than that. “When you take a photo of somebody laughing, you have no idea what they’re laughing at, it’s kind of frozen in time."

My ethos is playing with tragic comedy.

The work in the book informs the fashion design and vice versa. “I’m world building here,” Alex says. “And these creatures that I formulate have silhouettes. And a big thing I’ve noticed in fashion and clothing is that silhouettes are kind of inextricable, because we’re dealing with human shape and bodies and so forth. Not to mention colors and patterns that I try to embed in my work,” he tells me, regarding the symbiotic nature of all of his different mediums.

Even his music manages to convey a similar cacophony of swirling inspirations. “People have thrown around the word ‘industrial,’ but I think it’s more poppy,” he chuckles to me. It certainly has an industrial flare to it, but he samples artists like Blondie and other pop music he finds through watching TV shows and consuming media, punctuating his otherwise dissonant production with moments of melodic bliss.

He’s been minting NFTs since February of last year, as he saw it as a developing community and a perfect venue for continuing to explore his practice. At the end of February, he had piece of work included in a curated Nifty Gateway drop alongside the likes of DriftShoots and other major names in the space. His work for the collection is called “And a Mule.” On the importance of this drop, he tells me: “It’s an allusion to the saying ‘40 acres and a mule.’ It’s a very playful take on that. And it being Black History Month, that’s something that I think about often. Property and generational wealth and so forth. So if I could have that in the space somehow and introduce a new kind of conversation, that’s awesome to me.”

Alex began his artistic journey with play-doh, turned to paper and pencil, spent some time fancying himself a photographer, became a painter, minted digital artwork, designed clothing and now self-published an art book. Nearing the end of our conversation, he manages to put a bow on his journey pretty miraculously: “Along the way, I’ve discovered more things that I’m into. And I’m just trying to pull them all together.”